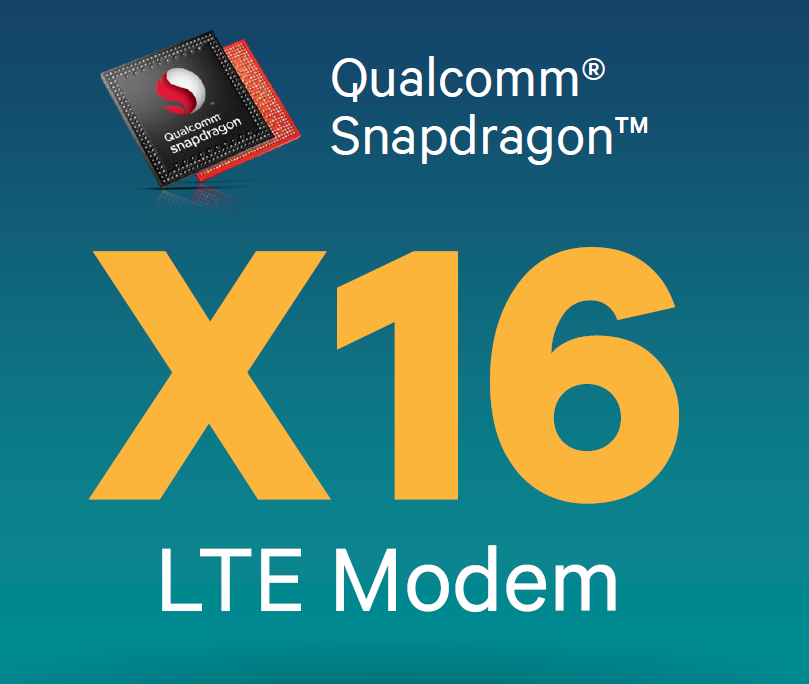 Qualcomm has been the global unit and revenue market share leader for years in modem technologies used in smartphones, tablets, PCs and IoT (Internet of Things). One of the reasons they have maintained this lead for so long is that they are typically first to market with new generations of modems. Today at their investor conference, they announced their latest and greatest LTE modem capable of gigabit-class speeds, specifically 1 Gbps, which translates to “Category (Cat.) 16” LTE according to the 3GPP standards. This is also the first modem that fits into the class of ‘LTE Advanced Pro’, which is the next step in LTE modem technologies and is a move towards the 5G future with gigabit-class connectivity. This new modem also brings a lot of industry firsts, even for Qualcomm, which include the first Cat. 16 LTE modem, the first LTE Advanced Pro modem, the first modem to support LAA (Licensed-Assisted Access) and the first discrete modem built on the 14nm FinFET process as well as a new modem architecture.

Why we need faster modems

The need for faster modem speeds is driven by “data density”. The growth of media consumption and content creation has driven the need for a gigabit class LTE modem. The resolutions of the phone and tablet displays have now reached beyond 1080P or 2K resolution compared to 480P in phones like the Galaxy S2 from five years ago. Over the past five years, these same phones have seen their cameras’ capabilities increase drastically from 5 megapixel photos and 720P video to 16 megapixel photos and 4K video. Just in terms of video alone, this means an 8x increase of resolutions and approximately the same amount of data usage. These increased resolutions have driven users to desire more and more download and upload speeds which means they are using their operators’ networks more than ever before. There has also been an explosion of video sharing and streaming applications like Periscope, Vine, YouTube, WeChat, Instagram and Snapchat. This increased demand can be clearly seen as most of the carriers have significantly increased their data caps across the board or kept their unlimited plans.

I am also thinking how this same technology could replace cables to the home and business.

Up to 1 Gbps 50% faster over prior generation

The new X16 LTE modem delivers peak speeds of up to 1 Gbps, an increase of over 65% over the previous generation using the same spectrum, the Snapdragon X12 LTE modem capable of 600 Mbps. Currently, only Samsung Electronics has announced any modems that can reach the speeds of the last generation Snapdragon X12 LTE modem which is also inside of the Snapdragon 820 SoC. Samsung’s announcement means that some of their phones this year will finally catch up to Qualcomm’s modems from last year. In fact, Qualcomm announced it originally in November, 2014 as a Cat. 10 modem, but announced its upgrade to Cat 12/13 along with support for LTE-U and 4×4 MIMO in September, 2015. They’ve already outdone themselves four months later with the Snapdragon X16 LTE modem. Qualcomm’s cadence in modems has seen the company increase download speeds roughly 10x over the course of the last 5 years alone.

These kinds of speeds can also enable entirely new use cases for wireless technologies, and the higher throughput and lower latency can allow for use cases that we haven’t even thought of yet. The reality is that these kinds of speeds are really what people were imagining originally when LTE was originally introduced as a ubiquitous wireless technology. You could bring the full speed of the wired internet with you anywhere you went, and now, wireless internet speeds are outpacing wired internet speeds in many places. This could mean the ability to experience virtually lag free remote desktop environments as well as video streaming as demanding as 360-degree VR HD video.

How consumers get 1 Gbps from carriers

The new Snapdragon X16 LTE modem achieves 1 Gbps speeds by using only three carriers at the same time, even though it can deliver such speeds with four carriers as well if 2×2 MIMO (multiple input, multiple output) is the only antenna configuration available. The three carrier configuration (3X carrier aggregation) uses 4×4 MIMO on the first two carriers and 2×2 MIMO on the third, making achieving such speeds much more realistic since having four 20 MHz blocks of spectrum is going to be extremely difficult in most geographies. The end result with these different carrier and antenna configurations is that ultimately you get 10 streams of LTE data, each carrying 100 Mbps. These speeds translate to 3GPP Cat. 16 downlink speeds of 1 Gbps, while the uplink, via 2×20 MHz CA plus 64-QAM is 150 Mbps or triple of most upload available today. The new modem also brings support for LTE-U and LAA, making the use of unlicensed spectrum easier and more possible across the world using one modem. And if all of that wasn’t enough, it also adds support for the new 3.5 GHz band of licensed spectrum, which is a new 3GPP approved band.

In addition to all of these new speeds and capabilities, Qualcomm’s new Snapdragon X16 LTE modem features an entirely new modem architecture which is designed to improve the company’s R&D efficiency. This new architecture allows for Qualcomm’s modems to be hardware and software scalable from the high-end to the low-end discrete modems. This change is intended to translate into delivering new products top to bottom in only one R&D cycle for all versions of Qualcomm’s discrete modems as well as shorter time to CS (commercial sampling). All of this means that Qualcomm is intending to spend less time and money developing their top to bottom modem stacks which could obviously be better for them and their customers relying on them to create faster modems at lower costs. With the X16 architecture, Qualcomm now has a modem for virtually every application all the way down to IoT and the company says it delivered it in one cycle, not three.

Qualcomm will not say what the building blocks are in the new architecture, but they are quick to say that these aren’t common compute cores as was introduced with NVIDIA’s now redeployed Icera modem division. Competitively, if Qualcomm can deliver what they say they can with the new architecture, this could put some serious pain on their discrete modem competitors because the mid-range and low end modems could arrive one to two years earlier on a leading edge node. Think about that. I’ll be keeping a close eye on Qualcomm’s execution, the competitive reaction and if and how this impacts companies like Huawei, Intel, Samsung Electronics and even MediaTek.

The new modem will also be accompanied by a brand new RF transceiver which is also the world’s first gigabit-class LTE transceiver. Other than the fact that Qualcomm has introduced 1 Gbps downlink (DL) speeds, they’ve also added support for 256-QAM and 4×4 MIMO, which are necessary to achieve such speeds. In fact, in terms of configuration this RF transceiver can support up to 4x DL CA (80 MHz total) as well as 2x UL (upload) CA (40 MHz total). However, the 2x UL CA is only possible with 3x DL CA enabled, not 4x DL CA. It supports all 3GPP bands, including 3.5 GHz which is the newest band. It also has 5GHz LTE-U support and location support for GPS, Glonass, Galileo and BeiDou, making it among the most comprehensive global positioning chips on earth as well. And even with all of those new features, Qualcomm says they have managed to implement fewer connections between the transceiver and the modem with fewer wires and less board space, making it easier overall to implement.

What makes this announcement all the more impressive is that according to Qualcomm, the Snapdragon X16 LTE modem has already sampling to customers and shipping in commercial devices by the second half of 2016, as in, less than a year. This also means that there will be networks that can support this modem’s capabilities around that time as well, meaning that we could see gigabit-class LTE networks as soon as this year. The expectation is that this modem will land inside of broadband devices and mobile routers first, considering the antenna complexity and how difficult that will be to implement in phones in such a short period of time. But there is still a very good chance that we will eventually see the X16 LTE modem in phones next year.

There are a lot of people wondering what exactly Qualcomm has been doing since they announced the X12 LTE modem and it looks like they are reaffirming their modem lead once again, just when we thought that the competition had caught up. Something similar had happened with Intel last year when they announced their XMM 7360 LTE modem which was capable of the same 450 Mbps speeds as Qualcomm’s 9×40 series delivered at the time. However, Intel didn’t keep up with Qualcomm when they brought their speeds up to 600 Mbps on that series and Intel still hasn’t shipped their Cat. 10 modem and now looks to be significantly behind both Samsung Electronics and Qualcomm. It’s very possible we could see Intel’s Cat 10 LTE modems shipping in devices around the same time we start to see Qualcomm’s Cat 16, once again widening the gap between the two companies. Additionally, Qualcomm’s Snapdragon 820 will feature a Cat. 12 LTE integrated modem while Intel’s discrete modem is still only Cat. 10. Either way, 2016 is shaping up to be a pretty exciting year in the wireless space, especially with all of these new SoCs and modems coming to the market with the new 14nm FinFET process and amazing speeds.