The Autonomous Vehicle of the future is getting incrementally closer, with technological advances in Advanced Driver Assistance Systems (ADAS) features such as emergency braking, lane keeping, pedestrian warnings, sign reading, and adaptive cruise control. While Intel ’s Mobileye is the market leader today for auto vision processing, many automakers are opting for more flexible and open technology from Xilinx for sensor data processing and control systems. Now Daimler AG and Xilinx have announced a collaboration to advance in-car systems with AI in automotive applications. Xilinx also shared some interesting adoption data on its success in the ADAS market, touting deployment in over 110 models, from 29 automakers—doubling its share.

I spoke last week with Willard Tu, Senior Director of Automotive at Xilinx , about the company’s momentum in the auto segment. Mr. Tu pointed to several factors that he says are fueling the company’s success in the automotive sector. First, Tier 1s and OEMs like being able to use an open platform to differentiate their AV’s advanced driving capabilities, instead of using the exact same silicon as everyone else. Automakers also like the FPGA and SOC platforms’ scalability and adaptability over time, particularly the ability to upgrade the hardware’s features over the air (OTA). Considering how fast the technology and regulation landscape is evolving, the FPGA reconfigurability may be the lynchpin that catapults Xilinx into a leadership position.

Looking at today’s vehicles (see Figure 1), one can see a slew of potential sensors. Each represents a possible in-camera or in-line processor for Xilinx to pursue, with many distinct camera, radar, or LiDAR sensors all feeding data to an ASAS/AD central processing module for driver information and automated control. Each automaker must select from a variety of sensor manufacturers and integrate those sensors into the in-vehicle information architecture. That is where the FPGA comes in, with its flexible, open platform for the pre-processing of those data streams feeding the central processor (which may come from companies such as Intel and NVIDIA , or even from Xilinx itself). These cameras, radars, and LiDARs are increasingly complex—the will continue to require higher resolution and frame rates as the level of autonomy increases from 1 (limited autonomy) to 5 (fully autonomous driving) over the next five years. The FPGA approach enables the automaker to have a broad spectrum of capabilities, each of which can be augmented and improved over time. 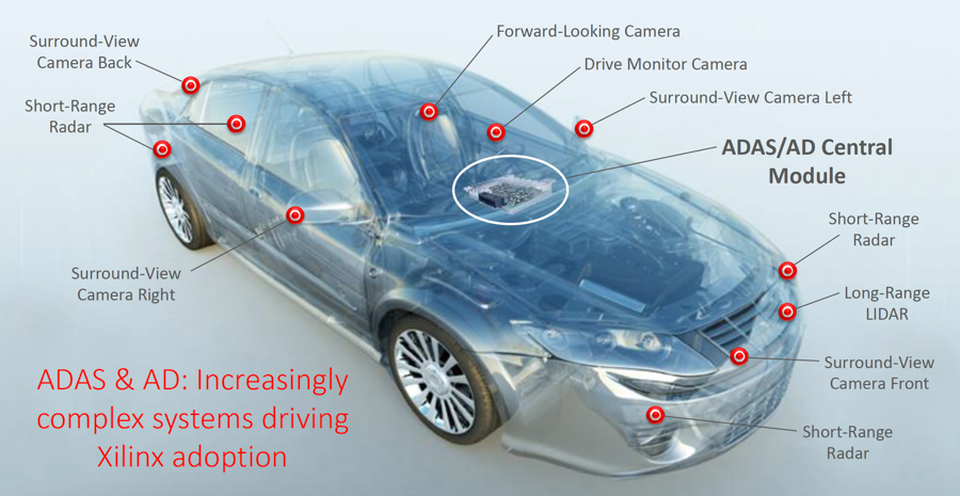 Figure 1: The inner workings of the autonomous vehicle includes nearly a dozen sensors, each of which streams data to a central ASAS/AD module for driver information and autonomous controls. XILINX

Xilinx says its next-generation Adaptive Compute Acceleration Platform, or ACAP, can handle cameras with eight megapixels, necessary to enable Level 3 autonomy (where safety-critical operations are handled by the vehicle). The ACAP’s low power and high-performance combination is key to this. Another area that is showing great promise is 4D Radar—RF sensors that determine an object’s location in range, azimuth, elevation, and relative rate of change. Adding elevation to the mix requires additional, significant computational demands that Xilinx is capable of processing. These sensors could enable level 3 autonomy (and above) by allowing a vehicle’s Central Processing Module to identify on-road debris, signage, and pedestrians, vehicles, and other highway topology.

Xilinx has been quietly building a large market share in sensor data processing for autonomous vehicles, and Daimler AG is now publicly committing to the Xilinx technology and roadmap. Xilinx claims it is already installed in 38% of all front camera processors. The company believes it has the potential to increase that share and play a role in the central processing platforms needed for higher levels of automation. While this latter goal feels pretty aggressive to me, given the lead that NVIDIA enjoys with Drive PX, Xilinx products already provide the level of high performance and lower power on an open platform that many automakers find attractive. Intel , on the other hand, is understandably focused on Mobileye’s dominant position. This leaves the fast-changing and fast-growing programmable market open for Xilinx to potentially do quite well.