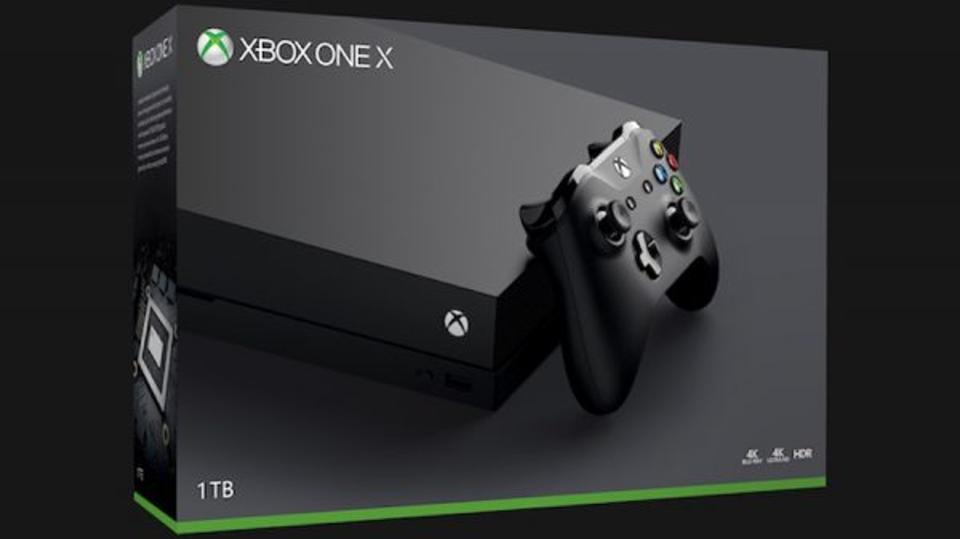 For nearly 20 years, my family has practiced a Thanksgiving Day ritual of playing the latest incarnation of Electronic Arts’ popular Madden Football series. I’ve always been impressed with new versions of Madden Football—due to the visual complexity of the actual game of football, Madden always pushes console hardware to its limits.

Because of this, I knew it would be a good trial game for the recently released, hotly anticipated Microsoft MSFT -0.14% Xbox One X (dubbed Project Scorpio). I was looking to provide some commentary and answer the big question I’ve been getting from friends and family: should I plop down $500 and make the plunge?

Form factor: a miniaturization dream but Kinect is now kaput

Compared to the original Xbox One, the new One X looks like it attended a series of hot Yoga classes. Measuring only 2.4” X 9.8” 11.5” (HWD), the One X’s slab-like form factor is remarkably small given the processing and graphics power its packs. Microsoft MSFT -0.14%’s engineering team also wins major-league kudos for the One X’s completely internal power supply, which eliminates the legacy Xbox One’s hideous power brick (the bane of its users). From a ports standpoint, the Xbox One X has the same ports as the original legacy model: HDMI-In, HDMI-Out, two USB ports, an Ethernet LAN connector, an optical connector, and 3.5mm infrared blaster output.

Unfortunately, with the introduction of the Xbox One X, MicrosoftMSFT -0.14% decided to kill the vaunted Kinect controller. One of the core reasons that attracted me to the original Xbox One was that unlike the Sony PlayStation 4, it played “nice” with home entertainment systems—seamlessly integrating with your cable or satellite TV feed with its “pass-through” video input capability. This was a marvelous step forward in making a video game console “friendly” to the entire family (especially Mom and Dad), considering the bedlam that typically ensues in the living room when the TV remote control can’t be found to change video inputs. Video pass-through also allows the Xbox One X to be truly used as an entertainment platform since the console’s OS has impressive app support for streaming services like Netflix NFLX -0.53%, Amazon.comAMZN +1.12%, Hulu and MLB.com, among others.

In addition, while the original Kinect was never going to win an award from Apple AAPL +1.49% for industrial design brilliance, it did easily facilitate voice recognition and provide image recognition (chiefly, to identify the user) with a camera sensor. Another thing that made the original Xbox One Kinect so great was that you could use a simple, Cortana-based voice command to automatically turn on the console (as well as the TV)—something I did almost every evening. Of course, voice recognition is still available using a wireless Xbox One-compatible headset, but for the casual user who is using their console as a convenient combo streaming entertainment AND gaming platform, this is not the most convenient scenario. The good news is that you can still connect a legacy Kinect controller for the same functionality if you have one with a $50 USB adapter (available online or at Microsoft MSFT -0.14%’s retail stores). I did exactly that and it worked like a charm.

On the plus side, the improved Xbox One X GUI allows you to easily access the vast majority of the top streaming apps, including NetflixNFLX -0.53%, Amazon Video, Hulu and my personal favorite, MLB.com. In comparison to the legacy Xbox One, I found the loading times for apps much faster on the Xbox One X and I like the ability to be able to run supported movies and shows in 4K HDR.
Explosive graphics, but you’ll need a 4K TV

There’s no question that Microsoft MSFT -0.14% has done itself proud with the Xbox X One, from a purely technical features standpoint; the One X’s graphics engine chugs along at 1.172GHz and is thoroughly capable of running 4K visuals at 60fps. While that’s significantly more powerful than the currently available Xbox One, you should keep in mind that you’re likely not going to see the visual improvements on most games unless you have a 4K-compatible TV.

The Microsoft Xbox One X’s CPU has been dramatically upgraded vs. the original Xbox One processor, with an Advanced Micro Devices ( AMDeight-core (yikes!) that runs at 2.33GHz. More importantly (from my perspective), the Xbox One X comes with a whopping 12GB of memory that supports bandwidth of 326GB/second. Why is this so important? From a future-proofing standpoint, more memory and a faster CPU allows developers to code more sophisticated, visually stunning games.

Does all this power actually create a better gaming experience?

Not unlike the Sony PlayStation 4, to really unleash the Microsoft Xbox One X’s power potential, games need to be developed or upgraded. At the time of this writing, more than 30 titles have been optimized for the Xbox One X, though depending on the game, the performance improvement can vary from basic graphics performance enhancement to 4K rendering. I’m disappointed to report that I didn’t have a “blow me away” graphics experience during my initial testing with the latest version of Madden 2018, compared to my legacy Xbox One—even though I was playing it on SONY ’s new 4K Bravia 65” OLED TV. In fact, I saw some occasional random artifacts (distorted graphics) during game play, indicating that the game has not been optimized yet for the One X. This doesn’t take away from the stunning new animations in the new Madden 2018, but I didn’t see a vast visual difference between both the old and new consoles.

Of course, big-time gamers don’t play Madden 2018—they play popular games like Gears of War 4, which has been optimized for the One X. Having played it on both consoles, I can reliably report that the game looks extraordinarily crisp and clear—even the opening screen shows widespread skin texture, accentuating the ruddy pores of the game’s main character. General gameplay appeared to float around 30 frames per second, and the animations jumped out at me.

Should your family and friends upgrade?

That’s the $500 question. The answer for most casual console users (especially those who have a legacy Xbox One) is to hold off until early 2018 when more compelling gaming titles that take advantage of One X’s faster processor and powerful graphics capabilities will be available. Even if you don’t have a 4K TV, the One X will still offer some nice graphics enhancements for some games, since it utilizes “super-sampling” and other filtering methods to make graphics more crisp on a typical 1080p screen. However, I think most users have an expectation that the One X will provide a quantum leap-like gaming experience, and it’s just not ready for prime time until a critical mass of optimized gaming titles becomes available.

In addition, I can’t stress enough that you MUST have the right TV to have a thrilling gaming experience with the One X. It is undoubtedly a technically impressive console (and certainly blows the PlayStation 4 specifications away on paper), but if you are going to upgrade, you need to make this purchase with your eyes wide open. My initial verdict is to wait until the post-Consumer Electronics Show timeframe in first quarter before making the plunge. To truly optimize your experience, I would also consider making that upgrade to a 4K television, if you haven’t already. With the Xbox One X, like many rookie NFL quarterbacks, there’s a lot of unproven potential—it’s going to require time to fully develop.