Prior to Apple developing iOS and over the last 25 years, there had never been much of a threat to the Windows 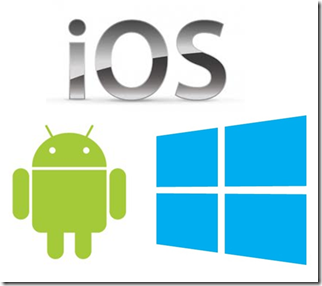 ecosystem. With iOS, Apple proved many things, including the value of a holistic experience delivered through purpose-built combinations of hardware, software and content. Now in mobile, it’s Microsoft looking into the window wanting to get inside. After iOS came Google’s Android, which was focused on the same areas as iOS. This week, with multiple announcements, Windows, iOS and Android all have some things to prove and I wanted to dive a bit deeper into some areas.

For decades Microsoft has been the uncontested PC market share leader. Macs made a little bit of a dent, but for the most part, Microsoft ruled and for years it looked like Microsoft would have uncontested dominance. That was until the iPad. While the iPad isn’t trying to be a PC, it did provide an optimal experience for specific usage models the PC once delivered. Sure, you can surf the web on your PC, but when kicking back on the couch is it the best way to do this? Not for me and not for 100s of millions of other people. I still must have my PC, but I prefer my iPad for certain tasks my PC previously performed.

With Windows 8, Microsoft hopes to bridge the gap between PC and tablet. They will attempt to do this by releasing Windows 8 on about every conceivable form factor possible and seeing what sticks. This is a huge risk in that they are also sub-optimizing the experience for desktop-only experience by adding the Metro layer and removing the start button. The Windows 8 experience is optimized for devices with touch and an accessible keyboard, turning the devices into a Swiss Army device. I have used my iPads for years with an extended keyboard, so I absolutely see the value here. This week, Microsoft must prove that flexibility of Windows 8 trumps the purpose-built focus of an iPad.

Windows RT adds another proving ground. For decades, Windows equated to compatibility with the past, which is inextricable linked to Microsoft’s IT roots and the fact that many consumers are peeved about wasting a prior, large investment. I am not saying that consumers care less about backward compatibility, but they caremore about what the device does today and in the future then the past. Unlike Windows 8, Windows RT will not run all the older Windows 7 desktop applications. Microsoft bridges the gap with some key Office apps, but forget about loading up iTunes or Quicken that you have. Hardware compatibility with USB devices is an unknown as well. This has never been an issue with the iPad, but then again, neither iPad or Apple stands for backwards compatibility.

Finally, we have Microsoft Surface, the first Microsoft-branded PC that directly competes with its ecosystem. This test will take a long time to play out but rarely do these examples of suppliers competing with customers work out well. While we don’t know exactly how pricing and features will work out over time, few premium-branded Windows tablet makers are excited about this. If Ballmer’s email to its stakeholders wasn’t clear enough, future Microsoft does two things: devices and services, and those devices that its customers currently provide.

While we will need to wait months and some cases years to fully understand how all these play out, the official launch for Windows 8, Windows RT and Surface this week will give better indications on where Windows is headed.

Windows Phone was very respectable in the early days of smartphones and was one of the few phones until RIM’s Blackberry to be accepted by businesses. Then came the iPhone and iOS, which undoubtedly changed Microsoft’s mobile fortunes for the foreseeable future. Instead of a commanding 90-95%% OS market share like it does in PCs, in mobile, Microsoft is looking right now, at best, 3% share of the mobile market. Given how Windows Phone 7.X has done, there must be some huge change for Microsoft to start gaining share.

Microsoft’s biggest challenge in smartphones is consumer apathy. Metro is differentiated, the maps are good and Nokia has some really good imaging but consumers are not yet all that excited about Windows Phone. Microsoft needs more black and white, differentiated, and demonstrable features to break consumers out of their addiction to iOS and Android phones if they are to make big progress.

With the launch of Windows Phone 8, Microsoft could start to reverse its fortunes. If Microsoft can show that a Windows Phone 8 is a must-have device to pair with a Windows 8/RT PC or tablet and an Xbox, I do believe they can start to make faster traction with those audiences.

Apple, plain and simple, invented a new category with the iPad. Sure, there were previous Windows Tablets, but the biggest issues were a lack of apps, pen requirement and very high prices. Tablets , particularly iPads have started to eat into the PC market. It’s not that an iPad can replace a PC, but some consumers are choosing to buy the new category (and shiny thing) instead of buying a replacement PC.

The iPad Mini will be interesting for Apple. Apple has always been able to command a price premium in, quite frankly, all devices. Whether it’s an MP3-playing iPod, iPhone, iPad, or Mac, consumers are willing to pay more. The iPad Mini will test this pricing elasticity more than ever. I believe to hit its profit goals, Apple will need to be priced at least at $299, which puts it into that 30-40% gross profit range. They could margin blend on the rest of the iPad line to get the price even lower, but that’s pushing it.

With Amazon Kindle Fire at $149, a $299-349 price will be pushing the pricing power farther than I have seen in a long time. I do expect an iPad Mini to have a much better experience than a $149 Kindle Fire, but with many consumers just glad to be able to have an affordable tablet, many will opt for the Fire. Apple will sell truckloads of the iPad Mini this holiday season, but not nearly as many as they could have if the Nexus 7 or Kindle Fire didn’t exist.

While Android has done well on smartphones and 7” tablets, anything above 7” has been a business and marketing disaster. Google had clearly deprioritized the 10” category as the smartphone market eclipses the size of the tablet market. At some point though, Google needs to bring their “A” game to large tablets and incent developers to create high quality tablet apps. Right now, Google does not allow anyone to easily count the tablet-specific apps as they number in the 100’s. Not 100′s of thousands, I am saying hundreds.

Google is rumored to announce this week a Google Nexus 10” tablet with Samsung. Price is almost inconsequential in that without more native Android tablet apps, a new Nexus tablet could be worse than bad. I expect 10″ Android tablets this holiday to be relegated to the bottom of the pricing barrel below Windows 8 and iOS. Unless Google can pull off something completely amazing and unexpected, this Nexus 10” will sell as well as all the other Android 10” tablets, not well.

Yes, this week will be one that all the ecosystems will have something to prove. When I step back a bit, I marvel at the amount of innovation and competition that is happening and just know this will be great for consumers this year and five years into the future. Competition and innovation are important as evidenced more than ever by this week’s announcements.