After attending Microsoft’s Windows 10 event in Redmond last month, I’ve written a bit about Microsoft’s Windows 10; for consumers, enterprises and on the Surface Hub and HoloLens. Now it’s time to talk about gamers. To this day, Microsoft still internally struggles at the corporate level in what seems like the eternal battle between PC and Xbox console gaming. Microsoft wants the best of both gaming worlds and is hoping to build on the successes of the Xbox platform and bring some of that console gaming pedigree to Windows 10. Microsoft has more than two decades of experience in PC gaming, a period that actually pre-date’s Sony’s first PlayStation console. However, Microsoft is also incorporating some new PC features like DirectX 12 that should reinvigorate the PC in terms of performance and functionality for gaming while simultaneously enabling more devices to run Windows than ever before. So the big question is, will Windows 10 win over PC gamers?

Even though they were late to the console game, Microsoft already had over a decade of experience in PC gaming. In fact, the 90’s saw some of the greatest PC games and PC gaming industry growth thanks to Microsoft and Windows. Remember Wolfenstein, Doom and Quake? I do as I spent hours playing them. Thanks to Windows PC gaming, we today have companies that are worth tens of billions of dollars and employ tens of thousands of people. According to Intel’s latest figures, the PC gaming market is now as big as 711 million users, ranging from casual to hardcore gamers.

DirectX 12 brings more performance and efficiency to the PC

Many in the gaming industry (and me) felt that Microsoft sat on their hands with the DirectX API for the past 5 years, and not until AMD came out with their Mantle API and Valve with their SteamOS did Microsoft really start again to pay attention to PC gaming. In many ways, even Khronos’ OpenGL API surpassed DirectX in terms of features and became a more attractive API for some.

Microsoft is releasing their newest graphics API, DirectX 12 with Windows 10 only and that is partially why Microsoft announced that they are giving free upgrades to Windows 10 for the first year to Windows 7 and Windows 8 users. That way, Microsoft doesn’t have to really worry about DirectX 12 backward OS compatibility as much and they can also try to convert their huge Windows 7 user base to Windows 10 easily. This should also make Windows 10 more attractive to game developers and encourage them to use DirectX 12’s APIs in their games.

DirectX 12 is important because it takes a lot of the lower level functionality that APIs like AMD’s Mantle already have and make it available to any GPU that can run Windows like those from ARM, Nvidia and Qualcomm. DirectX 12 is not GPU vendor specific like AMD’s Mantle and it still brings a lot of the benefits to the platform as a whole. This means that users can get more performance out of their GPUs while also more efficiently using their CPUs and in some cases using less overall system power.

At the event in Redmond a few back, I saw Microsoft demonstrate an Xbox app built into Windows 10 that will bring Xbox Live functionality into the Windows platform. The app is designed to bring the Xbox experience to the PC which would allow for a Windows 10 PC to play Xbox games as if it were an Xbox, thanks to Xbox game streaming to the PC. Microsoft also showed cross-device multiplayer, which would mean that you could play the same game on an Xbox or a notebook without any difference. There has been talk of such experiences in the past before, but nearly every time these features got removed due to some differences in game play or advantages to the PC player. Ultimately, it may be possible in more casual games but cross-platform play will still be unlikely in more competitive FPS or RTS games. 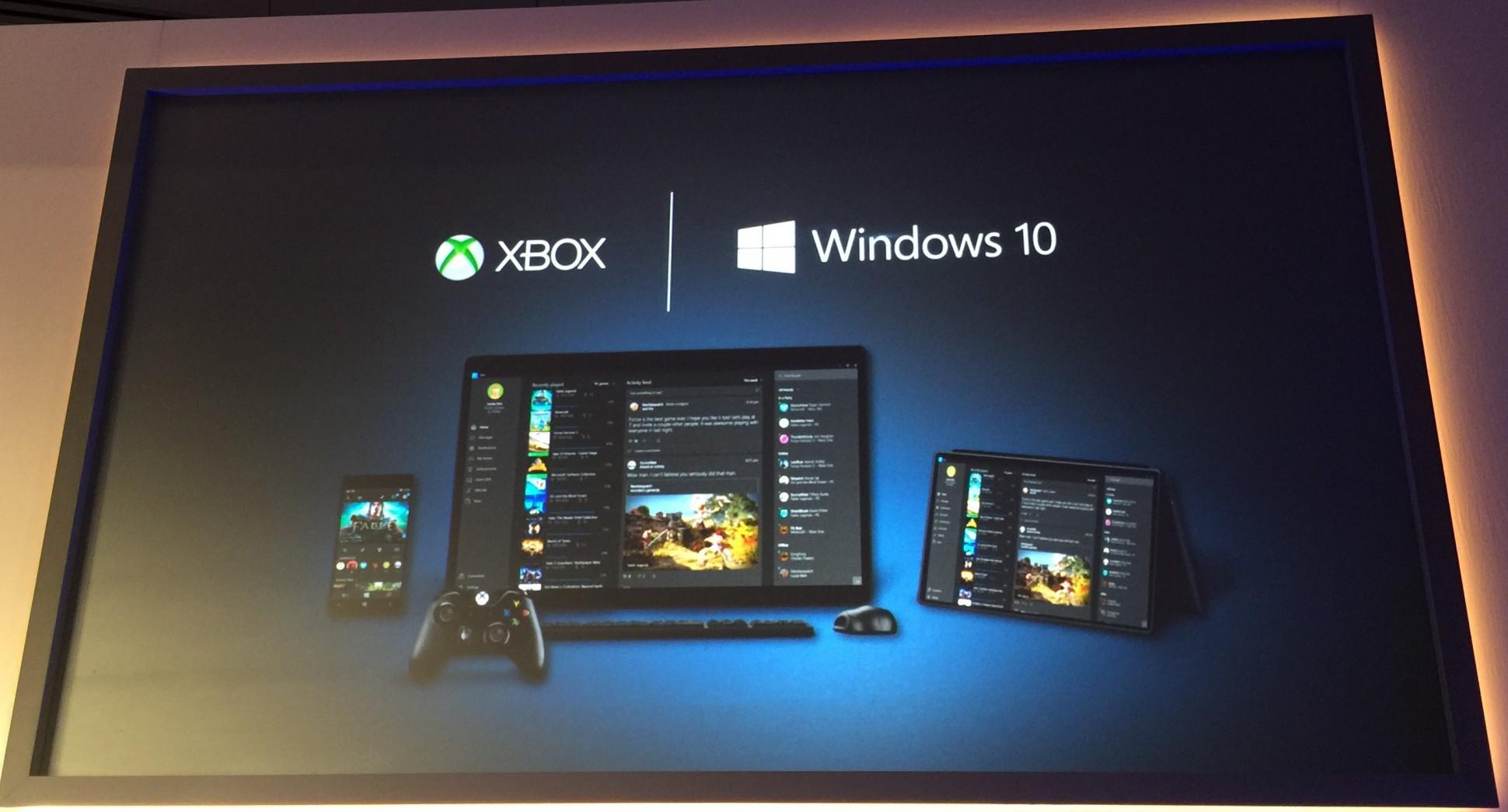 Microsoft is also building in a lot of recording and sharing features into the Xbox app for Windows 10, which will make recording and sharing games on the Xbox much easier. It should be expected that these features will be trickled into the Xbox, but the expectation is that these will be native for the Xbox experience on Windows 10. This is one of the few ways that the PC with Windows 10 could actually empower the Xbox further and improve Xbox sales.

Microsoft may also use the Xbox marketplace to retake some of the ground they’ve lost in digital delivery of games on the PC platform. After all, they essentially ceded that market to Valve with their steam marketplace as well as EA with Origin. According to Valve, the Steam platform has over 3,400 games and 75 million active users, which is 50% bigger than Microsoft’s Xbox Live and only represents a fraction of the PC gaming market.

At the most recent Windows 10 event in Redmond I attended, Microsoft talked quite a bit and demonstrated Xbox integration and streaming of Xbox games to the PC. This would mean that you could connect your Xbox controller to your tablet, laptop or desktop PC and play games that are on your Xbox One. At first, I thought that this sounded like a really big idea, like Nvidia’s GameStream with SHIELD. That is, until you really think about why people buy an Xbox and play on a TV. Most people buy an Xbox and play on a TV because of the large display (and simplicity), so there may not be many people that want to shrink that experience down to their 15” notebooks or 12” tablets. That is, unless the TV is occupied or unavailable.

There is another potential downside with this usage model. Most Xbox games are made at resolutions that hover between 720P and 1080P, while most PC games are made for resolutions from 1080P and 4K. It would be very interesting to see Microsoft upscale the resolution on the PC from the Xbox game. They certainly have the performance to do it on a modern gaming PC. Now imagine bi-directional sharing from the PC to the Xbox…. This would enable Microsoft to fend off advances from their competitors, namely Valve with their SteamOS and completely take dominance of the living room. Not to mention, creating this sort of connection would make Windows 10 a stronger more connected platform and could even make more people buy Xboxes to go with their gaming PCs rather than going out to buy a PS4 or some Steambox.

Net-net, Xbox game streaming to the PC is a valuable feature, much more valuable if the TV isn’t available, but Microsoft could do work to make it a better experience.

Lots of Microsoft’s users are still stuck on Windows 7 and many of those are PC gamers. Windows 8 and 8.1 simply weren’t friendly or familiar to many PC gamers and weren’t necessarily conducive to a productive PC gaming environment. Now that Windows 10 is going to look a lot more like Windows 7 but still bring a lot of the advances of a new OS, Microsoft stands to convert a lot of PC gamers to Windows 10. Building on that, the overall PC gaming experience simply lends itself more to the way that Windows 10 works rather than Windows 8.1 and will likely mean happier PC gamers that will in turn talk positively about Windows 10. Microsoft should not underestimate the power of the PC gamer and their opinions and if they really want to hit the ball out of the park they should enable PC to Xbox streaming.

Windows 10 stands to be the biggest release for PC gamers in a long time with improvements across the board. Windows 7 was a huge update for gamers with DirectX 11, but DirectX 12 stands to be far more important to the PC gaming industry. Windows 10 also stands to bring in a lot more gaming focus than any previous version of Windows with the Xbox integration and streaming. Clearly Microsoft wants to make Windows 10 a big update for all of their users and PC gamers don’t really seem to have been forgotten like in previous releases. Microsoft really stands to have a serious winner with Windows 10 for gamers and will very likely make a lot of PC gamers very happy.