One of the most important industry events will take place on October 26, the launch date for Microsoft’s Windows 8 operating system.  It will culminate a three year planning, development and test cycle for what CEO Steve Ballmercalls their riskiest product bet.  So why would Ballmer say this, especially when many in the industry characterize this as just a “bridge” release for IT clients until Microsoft can release Windows 9?  Let me outline why. 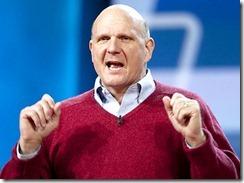 No Less than 50% of Operating Profits

Microsoft has done a good job of growing their revenue outside of the PC space.  Take a look at XBOX, Kinect, Enterprise Server and Tools, and Windows Windows Azure.  They represent complete businesses that Microsoft didn’t even participate in a decade previously, and for their fiscal 2012, 75% of revenue was outside the Windows Division.  Profits are a different matter, though.  For fiscal 2012, 53% of Microsoft’s operating income came from the Windows Division.  Yes, there was a significant write-down in 2012, but the operating profit per cent is still huge, as fiscal Q3 profit was 46%.  This still understates the true profits derived from Windows.  What’s not included inside of the Windows numbers are the Office numbers, because those are part of the Business Division which is incredibly profitable, too.  If Microsoft didn’t have the Windows OS, I highly doubt as many businesses would be buying Office.  So in reality, I estimate that Microsoft derives approximately 75% of their profits from being successful in Windows.    Starting to see the risky bet and why for so long Microsoft has been so conservative with Windows?

Since Windows was invented over 20 years ago, the “desktop” has been the UI metaphor.  Prior to that, it was a command line for DOS. With Windows 8, Microsoft is deprioritizing the desktop and moving the Metro.  Metro is the tile-based interface that has no “chrome”, or edges and leaves lots and lots of white space.  The tiles are “live” meaning they contain real-time information like stock prices, last email received, weather, social media updates, and sport scores.  All of this information is on one screen, instantly available to the user without the need to click or swipe anything.  Metro is designed for non-keyboard and mouse interfaces; that is, touch, speech and air gestures for phones, tablets, Xboxes and future large surface display devices.  Users can access the desktop by clicking on the Desktop tile.  So far, users cannot boot directly into Desktop, but there’s nothing technically keeping Microsoft from enabling this.

The other risk of deprioritizing the desktop is givingApple yet another shot and increasing market share.  Apple is still very committed to advancing the desktop usage models, and those buyers not comfortable with Metro will consider Apple now more than ever.

Net-net, Microsoft is deprioritizing the user UI metaphor that has been entrenched for over 20 years and one that arch-rival Apple still supports.

By deprioritizing the desktop and prioritizing Metro, Microsoft is also sending the message to developers that the developer future is Metro, not desktop.  I want to be clear: desktop apps will still operate in Windows 8, but users need to click on a tile, not an icon to start them.  Therefore as a dev, if you know the future is Metro and you developed your app on .Net, you have a choice to make.  Should you develop your next generation apps on .Net and operate in the deprioritized desktop mode, rebuild your app for Metro with the new tools available, or consider something else like iOS, OSX or Android.  Microsoft has done a decent job froviding tools for devs to assist with this transition.

Thankfully for Microsoft, few devs are getting rich on iOS and Android, and OSX is still  has a very low global market share.  So the likelihood of semi-successful Windows devs abandoning Windows is low, unless the dev believes the entire world is soon moving to iOS or Android.  Plus, most devs get married to a specific set of tools and don’t want to leave, and in Microsoft’s case, it’s Visual Studio.

Future of Microsoft Phones and Tablets

Because Metro is prioritized for non-mouse and keyboard UIs, it is also the future of Microsoft phones, tablets, living room devices and future large display environments.  The PC market is still slowly growing, but the Metro markets of phones and tablets are the huge Microsoft growth area they really haven’t participated in, and is the really only huge growth area for Microsoft clients business.   Simply saying, Metro must be successful for Microsoft to be successful in the fastest growing sectors of client computing.  They need apps focused on Metro, starting with Windows 8, to give a path to phones and tablets.

Not since DEC Alpha did Windows support an alternative client processor instruction set.  That was until Microsoft announced ARM support for Windows 8 at CES 2011 in Las Vegas.  Microsoft believed that they needed to do this to compete with Apple, and at the time, Nokia and RIM in smartphones.  This was because at the time, they didn’t see a low power future with Intel or AMD.  After Menlow, Moorestown and AMD selling off their mobility division to Qualcomm, who could blame them?  Also, to Microsoft, every incremental dollar Intel makes on silicon over ARM silicon, is a lost opportunity to charge more for Windows and their applications.

Since Microsoft’s ARM announcement, Intel has shown they have the low power chops with Medfield and AMD has surprised everyone with how efficient Trinity is on battery life. Still, Microsoft is banking on ARM devices to be successful for maximum profits even though they could always fall back on Intel in mobility and even AMD if they decided to enter the space.  Keep in mind that Microsoft’s decision to invest in ARM came at the cost of not investing additional functionality and usage models into the desktop, and therefore Microsoft needs to get something out of ARM to assure this payoff.  Microsoft must be successful with ARM architectures or risk competing toe to toe with Apple and Samsung, that is, unless Intel’s 14nm Haswell blows everyone away.

In real life, companies need to take risks to go for the brass ring.  Anyone who has worked at a company in a very fast paced and competitive industry knows this.  It is true in life as well.  I applaud Microsoft for going for it with Windows 8, even though I disagree with some of their strategies to get there.  And Microsoft should have never allowed themselves to get into this position either, although it is the classic Innovator’s Dilemma problem and result.  Had Microsoft dumped the desktop metaphor for phones and tablets years ago, I believe they would be sitting in a very different position today.  That is just history as the future begins on October 26.  Mark your calendars.