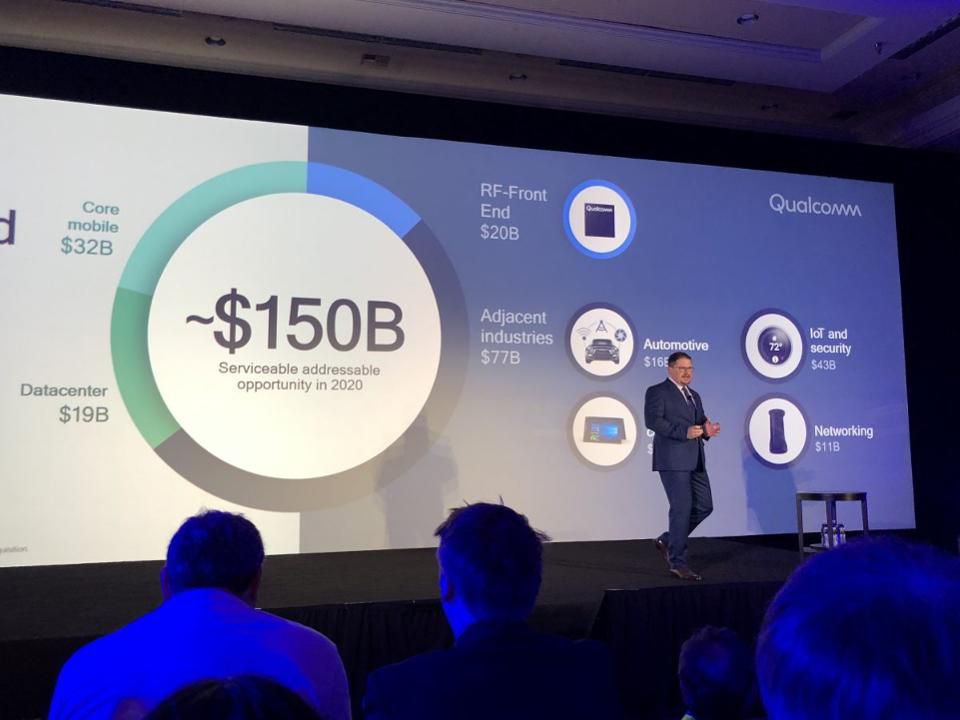 Over the past week, Qualcomm has made some unprecedented financial and business disclosures at CES 2018 and today in an investor video which has me thinking a lot about the company and its future with and without NXP and Broadcom. There’s no doubt that Qualcomm sees the benefit of acquiring NXP for long-term growth, they are about to buy them for $39 billion after all. That fact aside, Qualcomm’s current business units are already showed major strength in key growth areas in 2017 and beyond without NXP Semiconductors or Broadcom. Qualcomm is best known for their modem and applications processor businesses, and those businesses and associated licensing have paid the bills for many years. However, Qualcomm has also been investing heavily in other growth areas years ago that are complementary to Qualcomm’s strengths and address the realities of the changing technology landscape. Those areas are already showing quite a bit of promise, with some of them already paying dividends on Qualcomm’s earlier bets. These different segments are designed to allow Qualcomm to attack a $150 billion total serviceable addressable market opportunity by 2020. 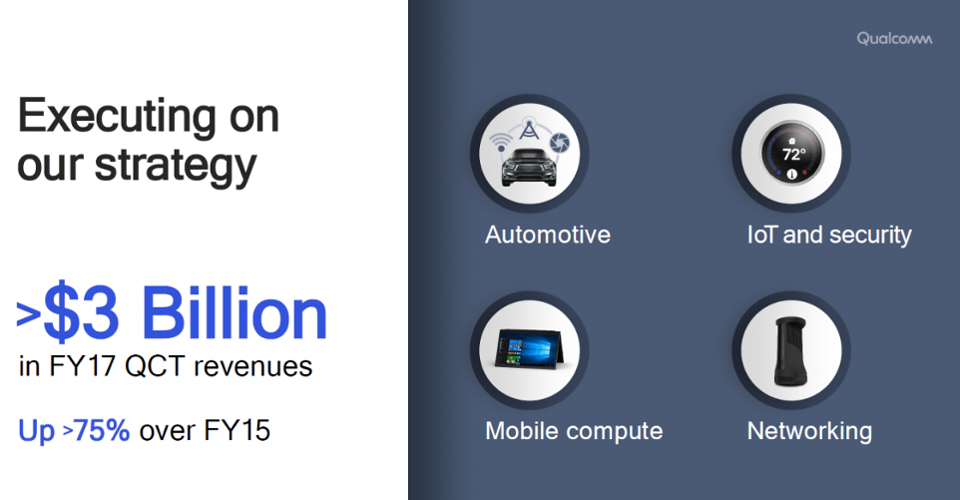 Qualcomm disclosed the company generated over $3B in non-mobile business in FY 2017, 75% growth

5G opportunity and already $1B in IoT revenue

One area that many people will be familiar with is 5G. One immediate area that will recognize significant improvements from 5G is the area of mobile broadband. The improvements to 5G that are expected to drive early deployments of 5G are expected to trial in 2018 and begin rollouts in earnest in 2019, and while it won’t be a global rollout that year, China, The US, Europe, Korea and Japan will all launch networks then. More networks are expected to roll out by 2020 along with standalone 5G networks, but new networks need 5G devices and small cells, and that’s where Qualcomm will come in. There may be a bit of a push and pull between Android and iOS devices in 5G, with Qualcomm likely benefitting from 5G Android devices much more than iOS with their X50 modem family.

5G is slated to be the “connective tissue” that interconnects multiple industries and makes ubiquitous connectivity and intelligence a possibility. If you can’t gather data and update devices remotely, those devices become much less relevant in the overall scope of IoT, that’s why 5G has so much potential for IoT adoption of Qualcomm 5G technologies. It won’t be limited to what we traditionally think of IoT devices either because the transformative power of 5G will improve industries including the PC sector. Tethering is traditionally used to connect PCs to Wi-Fi connectivity or Wi-Fi hotspots, but with 5G laptops, tablets and convertibles can go truly mobile like smartphones. The company’s Snapdragon on Windows 10 project with Microsoft and OEMs like ASUS, HP and Lenovo may be a sign of more to come in this area.

Qualcomm’s IoT business already saw upwards of $1 billion in revenue in FY 2017, which shows the significance of the business today and into the future.

Qualcomm’s ability to harness its strengths in core businesses to leverage itself into new businesses is also showing in their automotive efforts. Previously, Qualcomm’s involvement in automotive was essentially entirely focused on telematics like OnStar. Getting your foot in the automotive door isn’t an easy one and Qualcomm thankfully already had one, but still has made significant efforts to get involved in 5G telematics and infotainment. Qualcomm’s efforts in this space have already yielded 25 new design-wins in just FY 2017 alone and come along with a $3 billion design-win pipeline, which means these are volume vehicles. That’s ignoring any potential future design wins that Qualcomm may successfully get in 2018, especially with their leadership in 4G and 5G. Qualcomm announced at CES 2018 that they would be powering Jaguar and Land Rover’s next-generation cockpits/infotainment and telematics systems in addition to Honda and China-based BYD. 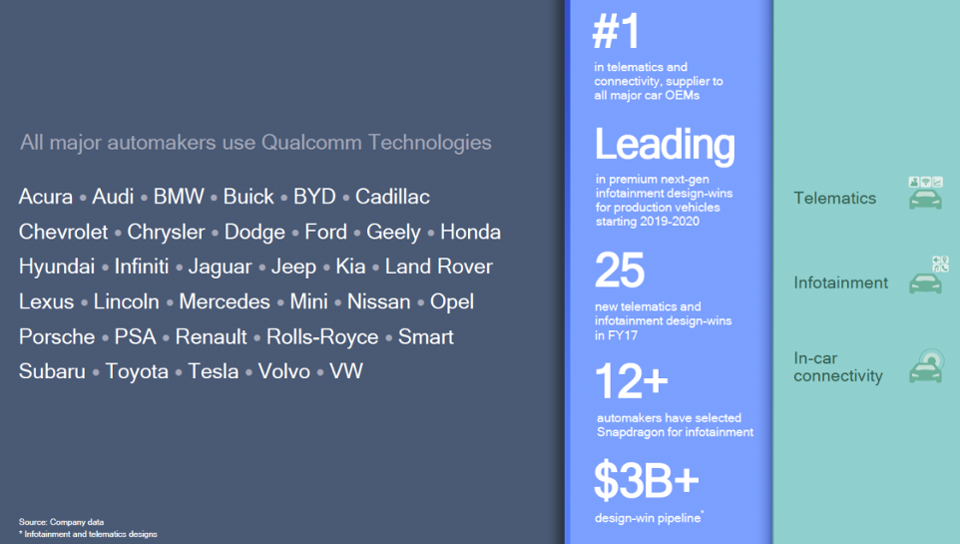 Unknown to most, Qualcomm has #1 share in auto connectivity and telematics and has 12 carmakers on deck to take their infotainment solutions
#1 in mesh WiFi and taking Broadcom market share

In addition to 5G and automotive, Qualcomm’s Wi-Fi business comes from their acquisition of Atheros in 2011 is paying major dividends for the company. Qualcomm is driving several trends in the Wi-Fi space, especially with their leadership in mesh networking like Google Wi-Fi. In fact, Qualcomm’s Mesh solution has allowed the company to achieve the number one position in retail mesh networking. Qualcomm says that nearly 40% of the US retail home Wi-Fi market is based on mesh now and that they have number one mesh market share. This market share also allows them to claim number one global Wi-Fi market share and enterprise/home/venue market share. All this Wi-Fi market share is important because down the road, Wi-Fi access points will be the core of how many people’s devices will interface with the internet at home. The Wi-Fi access point will become the front door to many consumers’ homes, and carriers are starting to realize the importance of this and adopting Qualcomm technologies as well. 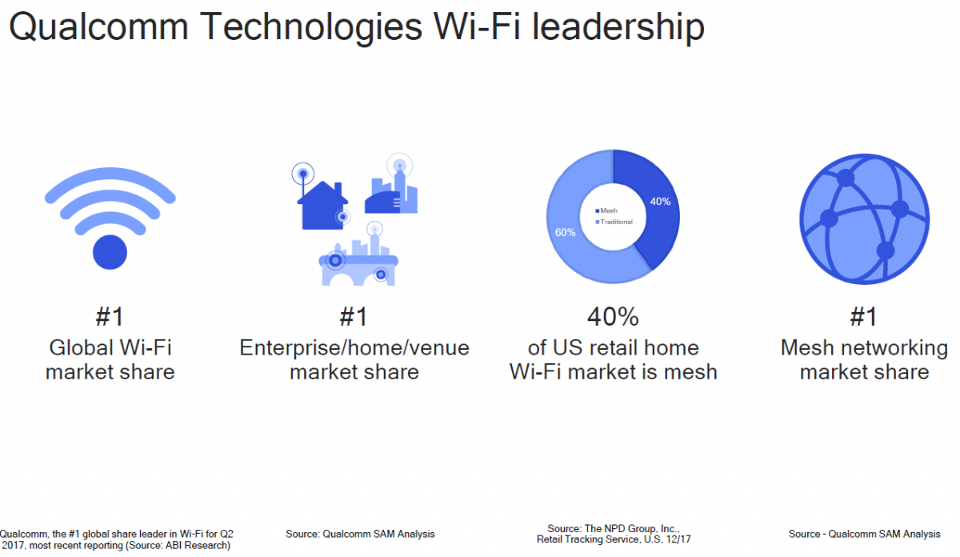 According to ABI Research, Qualcomm is #1 in WiFi, surpassing Broadcom

So if Qualcomm is gaining WiFi market share, who is losing it? Well, according to many sources like ABI Research, Broadcom is the one losing the WiFi revenue market share. Broadcom was formerly the WiFi king, but now it’s a two-horse market share race between Qualcomm and Broadcom. This makes me wonder about Broadcom’s motivation to buy Qualcomm, but also wondering if this is the first example of the results of Avago’s management style which is to cut R&D to the bone.

Many think a digital, wireless modem is all you need to make phone calls and consume data over mobile. The reality is that for a complete solution, it requires the digital and the analog end to communicate with the cell tower. Another major area of growth for Qualcomm is in their analog RF business. Right now, the major players in this space are Broadcom, Qorvo Inc., and Skyworks Solutions and there is an expectation of major growth for the industry. The expectation of growth is thanks to the increased need for wireless adoption thanks to IoT and 5G as well as other wireless technologies gaining traction. 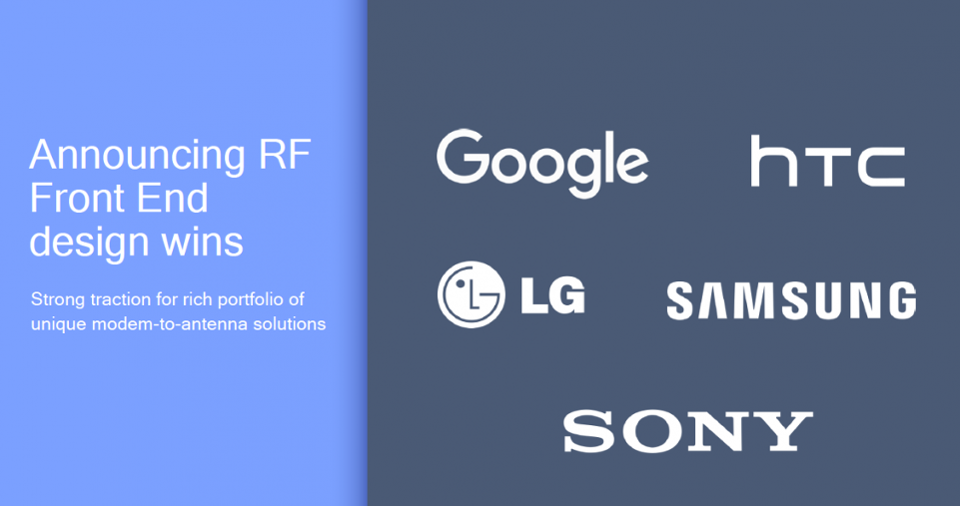 Qualcomm’s own RF efforts have started to heat up with the creation of their TDK joint venture and the subsequent modules that are built using the joint technologies. Qualcomm is now the only player that can deliver a complete end to end solution between the antenna and application processor. This end to end approach allows them to create very tightly integrated solutions that handle poor signal or extremely complicated band combinations that would otherwise be impossible. A good example is the work that Qualcomm is doing on 600 MHz that allows them to share antennas and other components between 700 MHz and 600 MHz bands on the same device. These kinds of unique solutions will likely not be the end of Qualcomm’s innovations in RF but rather the beginning as complexity increases with the introduction of 5G and IoT.

All rose petals and unicorns?
Qualcomm has successfully managed to diversify its business in a way that no longer makes the company wholly dependent on the ebb and flow of the smartphone industry. The issue was that Qualcomm wasn’t telling many people about it, until now. Obviously, mobile is still a large portion of Qualcomm’s overall revenues and businesses, but the company is making significant inroads in these other business segments. Qualcomm’s success in these categories is what enables the company to be less dependent on the success of the NXP Semiconductors acquisition or a Broadcom deal. The new data reinforces that the Broadcom deal would be a really bad one and while I believe that the NXP deal is very complementary to what Qualcomm is already doing, it does build upon the momentum that the company already has in these spaces. A standalone Qualcomm wouldn’t be all rose petals and unicorns, but certainly better than a disastrous Broadcom acquisition. We’re already seeing cracks in the Broadcom/Avago style of cutting R&D to the bone with WiFi market share losses, late to market with mesh WiFi, losing RF share, and being literally nowhere in 5G. No wonder Broadcom wants Qualcomm.