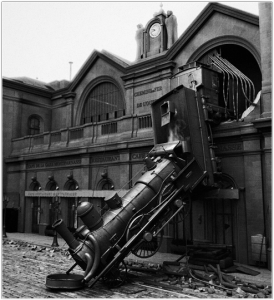 Google stopped selling the Nexus Q and cancelled all consumer pre-orders, saying buyers would get the unit for free.  It appeared obvious to just about everyone except Google that the Nexus Q value proposition was incredibly weak.  So how does one of the most powerful companies in the world allow a product so obviously not ready get to market?  It happens for many reasons and more often than you might think.  I’d like to characterize the many reasons products like this make it this far as I experienced it through my 20 years of product management and product marketing.

While I detail out the Nexus Q value proposition here, let me provide a small sample.  For $299, consumers get a cool looking black sphere for music and video streaming that can only pull content from the Google Play cloud.  To control it, you must have an Android phone or tablet, and if your friends want to add tracks to the music list they must have an Android device. The Q also came with a high quality, built-in amp and speaker jacks.  Net-net, it was $200 or 3X more than an Apple TV or Roku device if you are looking at it as a content streamer.  If you are audiophile, you will be comparing it to a Sonos, which while comparatively priced, can also stream from multiple cloud services, and be controlled by iOS and Android devices.

The press gave it the expected response.

The press reaction was brutal.   The best way to show just how bad it was is with the headlines:

Google I/O was a smashing success.  They launched a great Nexus 7 tablet with Project Butter and Google Now, some cool social and search features, and who will ever forget the Google Glass demo?  Google didn’t need to launch the Q to have what I would characterize as one of the more perfect developer conferences.

So why and how exactly do products like the nexus Q make all the way through the ideation, planning, execution, and launch phase without someone putting the brakes on?  There are many ways and reasons this happens that I outline below, and product managers need to pay heed to all of these potential pitfalls.  I am generically speaking about products, not specifically about the Nexus Q.

Some companies don’t solicit outside opinion by design.  Outside opinions can be via market research, consultants, tech analysts, etc.  The project is so secret that they put the team members in another building with limited access and have them sign NDAs.  This is done, obviously for security, and there are hundreds of examples of this that the industry finds out about after the fact.  This week in the Apple-Samsung trial, we all heard that the iPhone development was treated like this.  This secret method obviously works well for Apple and a handful of companies, but for other companies, not so great. Some other companies don’t solicit outside input because they just don’t see value in it.  Some say it’s too time consuming or too expensive.  That’s just code for “I don’t see the value”.  They figure they are the experts, have all the answers, and any outside inputs could lead to having the project derailed.

Living in an Alternate Universe

Sometimes, companies will solicit external input on a concept or product but don’t listen to the advice or heed it.  Many times you will hear the phrase, “well that’s only one piece of input we’ll incorporate.”  This usually means the outside input won’t be used or even heeded, because, quite frankly, the company “knows” more than the outsider giving the input.  Or so they think.  These kind of folks get outside input because the rule book says they needed to get it and once they did, it becomes a filled-in check box versus valued input.  The product planner may believe the input, but just not heed the outcome.  The end result is the same as not soliciting input.

Many times, a product will successfully make it down the gate process only for the PM to be surprised down the line by a cost over-run or an internal team missing a delivery date.  This could very well have happened to the Nexus Q.  I can imagine the Q had a very long list of required features and nice to have features.  Judging by what launched, the “must-have” features didn’t even ship.  I can see just a few features that could have been added to make the Q the must-have party device.  What happened next was where the damage was done.  So what is a product leader’s reaction if their product is hit with a significant cost overrun or schedule slip?  In the case of the Q, the impact was most likely minimized.  Look at many Google products that get sent out as “Beta” at Google.  Most of them do.  Google News and Shopping were betas for years and cost the consumer nothing but time to use.  The difference is that the Nexus Q was $299 and it was more like Alpha stage if you gauge on feature completeness.

The Emperor Has No Clothes

When I have been privy to post-mortems of train-wreck projects, many times it comes down to a lack of leadership.  The entire team had a decent vision, knew the customer and what they wanted, solicited external input, listened to it, and knew the downstream impacts of issues that existed if they trudged forward.  But the leader in charge felt they had to meet the date at all costs or didn’t listen to the team members.  The leader made a commitment to someone, whether it be to their VP, SVP or board of directors to deliver something by a certain date and they were going to do it come “hell or high water”.   Leaders are trained to listen, be decisive and stick to their guns, sometimes at big costs.

What’s Next for the Nexus Q?

I believe the team managing the Nexus Q had a deadline to hit with Google I/O , they got in over their heads on features and just couldn’t deliver.  And no one stopped the project.  The Nexus Q name and Google brand has been damaged, but I think it’s recoverable.  To maintain the Nexus Q price, Google will need to add a ton of features.  I am envisioning the “ultimate party device” where everyone who comes to the party can play videos, music and games from their own device and the cloud.  I can also see “party mode” where every picture, video clip, and social media post  taken at the party is shown on a large HDTV. If something like that is a bridge too far, then Google will need to pull the price lever.  The BOM cost cannot be over a $100 with the built-in 25W amp, so they have a lot to work with.   Whatever Google does, they need to make some decisive moves if they hope to be successful with living room devices.