Gartner and IDC are getting a lot of attention about their recent PC market statistics. It’s important to understand what the reports mean and don’t mean if you are to understand where OEMs Dell, Hewlett-Packard, Lenovo sit and where chip makers Advanced Micro Devices, Intel and NVIDIA lie. The PC market is declining…quickly. The good people at Statista created a nice infographic of Gartner’s quarterly estimates. 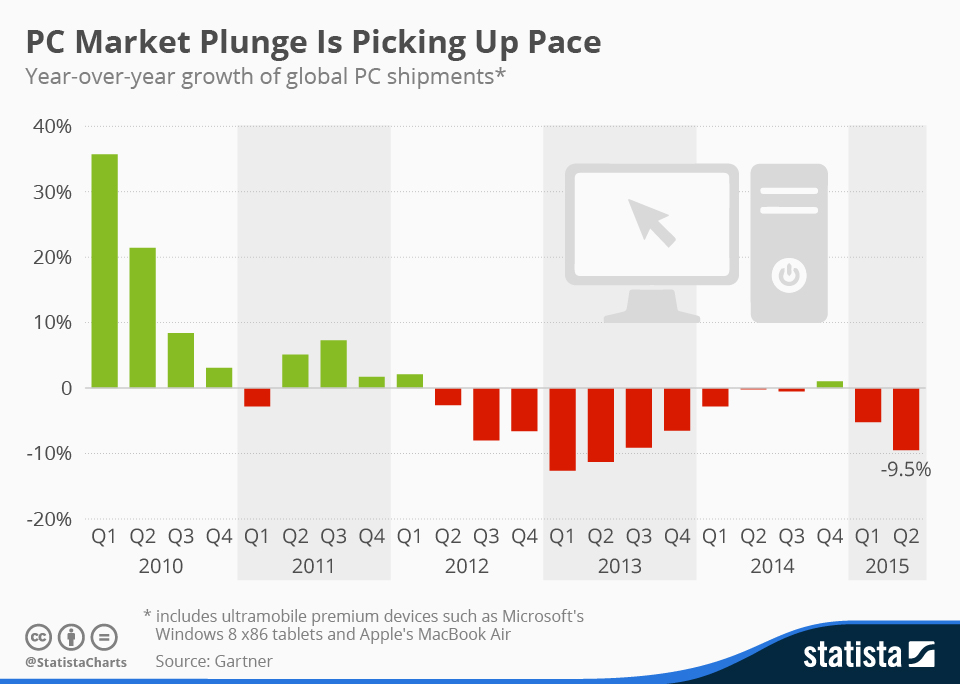 Gartner says the PC market is down 9.5%; IDC says it’s down 11.8%. Both firms agree that the PC market is declining, but they disagree by how much. I’ve been paying attention to quarterly market statistics for 15 years (60 quarters). First I was a customer at a semiconductor vendor, then I became somewhat of a competitor at a multinational research firm. Now, in my role is a complementor to the providers of technology market statistics, I thought I’d look at why disagreements like this can be good.

Here, I’m focusing on the publicly-available press releases from Gartner and IDC. Both of their headlines invoke the upcoming Windows 10 operating system from Microsoft.

PC Market Continues to Decline Ahead of Windows 10 Release, According to IDC

Then they list 3 factors contributing to the PC market’s decline, but they’re in a different order from each other, and Windows 10 isn’t even #1. If they’re listed in order of importance, then I like that the order is different. It means that Gartner and IDC both see the same things and are reacting to them differently. Same inputs, different outputs.

Their starting points are somewhat different: Gartner’s 2014Q2 is about half-a-million units higher than IDC’s. Their endpoints are very different: Gartner is more than two million units higher than IDC. So, when it’s time to calculate the year-on-year change, there’s a 1.7 million unit difference between the two data sources. IDC is estimating a bigger decline off a smaller base, thus the disagreement about rates of decline. And that’s ok, because they agree directionally: the PC market has declined by around 10%.

“Around 10%” is accurate enough for many purposes. Talking of accuracy, the reason for the apparent inconsistency in the table above is Gartner used one significant digit more than IDC did in their press release. That’s another topic, though.

Both are measuring the same thing–PC shipments–and their definitions of “PC” are similar.

IDC: PCs include Desktops, Portables, Ultraslim Notebooks, Chromebooks, and Workstations and do not include handhelds, x86 Servers and Tablets (i.e. iPad, or Tablets with detachable keyboards running either Windows or Android).

But their definitions of “shipments” are slightly different.

Gartner: The statistics are based on shipments selling into channels.

IDC: Shipments include shipments to distribution channels or end users.

It would seem that IDC could capture more shipments if their definition includes distribution channels or end users. But their market size estimate is smaller than Gartner’s. Maybe Gartner’s got a broader definition of channels? How are their methodologies different? To whom are they talking? There are a lot of questions. What should we do about the differences between these data sources?

Instead of asking ‘What are we going to do about these differences?’, I think we can ask ourselves ‘What are we going to do with these differences?’ I think we should embrace them. I don’t think one is more correct than the other. They both look at the same thing from different perspectives. They use the same inputs to create different outputs. And that forces us to consider the inputs for ourselves. It’s a little more work, but it leads to better understanding.

Further, I think the combination of both sources is more powerful than either one individually. Multiple inputs create a more reliable output. To me, a combined market estimate is better than a single market estimate. A consensus forecast is better than one source’s forecast. For companies who can afford to subscribe to data from more than one data source (Gartner, IDC, IHS , etc.), the insight gained from adding 1 + 1 can sometimes be greater than 2.