I spent this week at the 2014 Mobile World Congress in Barcelona, Spain. As is usual, I was on the lookout for new or disruptive mobile devices, technologies, usage models, software, and services. What I want to talk about in this column are mobile application processors and modems. If you are following this space in mobile, you know there is a fierce fight going on between Qualcomm, Intel and MediaTek for the hearts minds of handset makers, channel partners, carriers and even consumers. Many times, the handsets and tablets shown in the booth represents the biggest and best design wins, and those can represent the kind of business they will be getting. Talking about what is shown at a trade show is not an infallible method because many OEMs don’t allow the vendors to share the information, but it is better than nothing.

I walked around to the Intel, MediaTek, and Qualcomm booths and cataloged the different mobile designs they were showing off. There were some definitive patterns that arise from all three vendors.

Qualcomm showed off a dizzying array of hero smartphones and hero tablets.

In tablets, the story was very similar in the consumer space, as Qualcomm saw hero tablets from Sony (Xperia Z2), LG (G Pad), Lenovo (Yoga Tablet HD 10+) and carried over hero tablets from Amazon (HDX), Nokia (2520) and Google (ASUS Nexus 7). Like phones, Qualcomm is inside LTE versions of Apple’s Air.

In total, I tallied up 57 mobile designs and you can see a full list here. 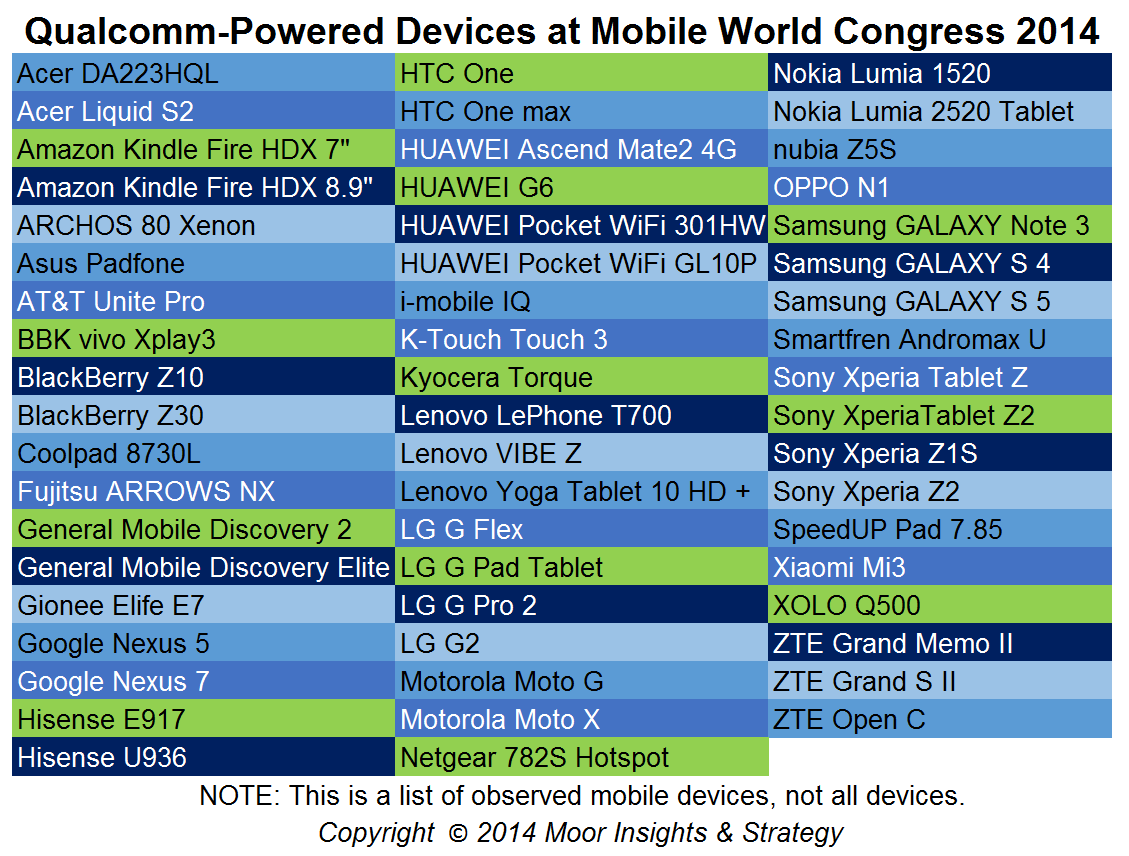 Intel’s design wins they were showing off were definitely mainstream tablet-heavy. This makes sense given Intel’s publicly stated 40M unit goal for 2014. Most of the OEMs shown are strong in PCs, like Dell, HP, Toshiba, and Acer, but haven’t made tremendous traction yet in mobility. Intel did, though have tablet wins with tablet heavyweights like ASUS, Lenovo and Samsung.

The smartphone situation was very different though, as there were no new name-brand designs rolled out at the show, which had to be a bit disappointing. The year isn’t over, though, and there could be more design wins on the way, particularly for the holiday selling season. There were very strong rumors that Intel’s LTE chips will be inside some of Samsung’s new Galaxy S5 handsets.

Overall, I counted 23 mobile designs. You can see the list here.

MediaTek’s designs in their booth were characterized primarily by lower-cost and Asian mobile brands like Gionee, Huawei, Oppo, and ZTE. The only premium global mobile brands shown at the booth were Sony and LG, but the products were in entry or mid-range products, not hero products. The one bright spot was Lenovo’s Yoga 10 Tablet.

I counted 19 mobile designs in the booth and MediaTek’s designs were what you would expect; low cost phones. You can see the complete list here.

What does it all mean?

Like I said before, documenting what chip vendors demonstrate at an event like MWC isn’t a total count of design wins, but provides insights into the form factors (phone, phablet, tablet, hotspot), and mix (entry, mid-range, premium, hero). Based on MWC show presence, Qualcomm appears to have dominated in both form factors and mix. Literally, nearly every hero and premium SKU has Qualcomm silicon inside. Beyond MWC, according to Qualcomm, they have 1,350 Snapdragon-based systems in production or announced, have 500 more in development and have 40 premium tablets in development. Intel is clearly making progress in tablets off the backs of its PC partners and they say they will end 2014 #2 in LTE. MediaTek is doing the same thing they have done for years, which is to focus on the low end of the market.