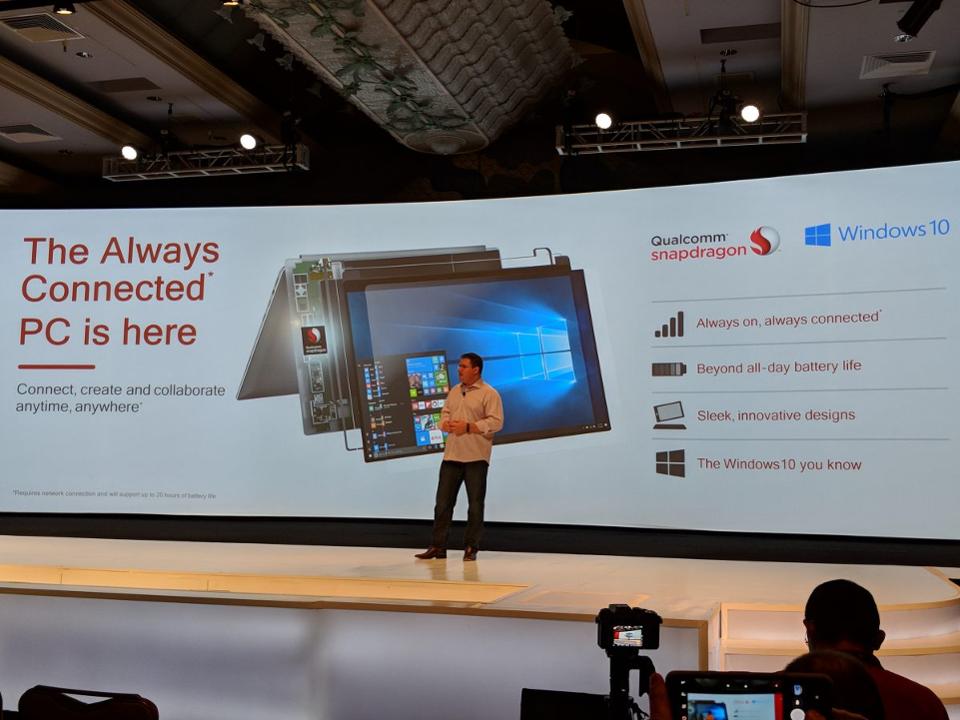 I am attending Qualcomm’s Snapdragon Summit this week in Maui (rough I know), which is the company’s once a year event to show off to press, analysts and the world what’s on deck for the mobile world and those markets and devices using mobile technologies like IoT and automotive. Yesterday’s big unveil was around Qualcomm’s version of the Always Connected PC (ACPC) and I wanted to talk about that here. By version, I mean that Intel has their ACPC flavor that leverages some different characteristics. What I want to focus on here is what it will take to make this category to be most successful. If you want the straight news on what was announced, you can find press releases from Qualcomm and Microsoft here and here.

Before I jump in here, I want to express just how important it is the PC market to do an ACPC. I do believe segments exist who value what the ACPC brings to the table (always connected, extreme battery life, very mobile form factor) and if executed with some of my suggestions below, could expand the PC TAM. The last decade has shown us that consumers and buyers are more attracted to PCs as they adopt smartphone attributes of battery life and always-on when married with the PC benefits of flexibility, display size, keyboard, and mouse. The ACPC is trying to better meld the benefits of the PC with the smartphone.

While the ACPC is very different value proposition from the fateful Windows RT days, some in the industry still make those comparisons. This is unfortunate and misdirected but expected. Therefore, it is vital that the first-out products must be deemed successful. To increase the odds of first-out success, I believe it will be important to more finely tune the target audience as this will direct optimal messaging, marketing, and distribution.

Right now, I see Qualcomm and Microsoft targeting consumers first, then enterprises. I like consumer-first as enterprises will want to evaluate the technology and system for a year before deploying. I’ll add that I absolutely think enterprise is a great market, but just not first. I’d like to see the consumer target market narrowed to a target market that values battery life and connectivity over software performance. Based on some small sample research we conducted recently, I believe students and gig economy workers who don’t run apps that require the highest-performance should be targeted first. This segment is moving from class-to-class, client-to-client and needs super-long battery life, always connected via LTE and WiFi, and spend a lot of time in email, browser, and Word.

By narrowing the target at first, I believe Qualcomm and Microsoft will improve the degree of success.

Publish a specification for ACPC

What is an ACPC? I can’t authoritatively tell you as I heard many different, some conflicting attributes, over the last year.  I believe an ACPC should be:

Yesterday, I heard various definitions of what an ACPC should be. A good example of this was battery life. I heard one week of use, 20 hours of use, 22 hours of use, one week standby, and 700 hours standby. The industry needs a common definition of an ACPC or I believe this will confuse consumer and businesses and when this happens, those parties don’t buy.

Therefore, what is acceptable software performance? Well, it depends on the user’s use cases and workloads. In today’s notebooks, some notebook and tablet users are happy with an Intel Celeron, some need a Core m3, some want an i5 and some an i7. Intel year after year has increased their ASP and has moved many users up in the stack.

This why having a narrower target is important as I outlined above as it’s easier to target applications to enhance. I believe an ACPC will run Microsoft App Store apps quite well. For my prescribed target market, Win32 Office 365 and Chrome performance will be vital. Crysis isn’t as important. Therefore it will be important for both Microsoft and Qualcomm to optimize their own apps and leverage their large ISV might to get other companies to optimize. These optimizations also apply to Win32 apps and USB devices that have some incompatibilities.

Get carriers to deliver

This isn’t the first time carriers and computers came together. With netbooks, carriers sold the devices as connected devices but made the terms onerous and didn’t have much of a clue how to sell a PC, either. The effort failed miserably. I have heard good words from the carriers on this new initiative, and given Qualcomm’s involvement a higher degree of success, but will carriers just be carriers? eSIM must be prevalent and fully supported, rates need to be more than fair and signup needs to be as simple as picking a carrier, logging in and adding a plan. I’d also like to see some big, early incentives. Carriers need to see this as a TAM expander, not just another device that eats bandwidth, or this will fail.

Align the OEMs and the channel

At the end of the day, customers don’t buy chips or operating systems, they buy PCs, applications, and services, and they buy through an OEM or a distribution channel. As the ACPC with extended battery life is a new category with a new value proposition, it will require a lot of education, and this is will require a lot of consistent reinforcement. This is where my #1 suggestion on everyone agreeing what an ACPC is, becomes vital. Imagine if everyone engaged in ACPC is telling an inconsistent story?

One way to align consistency is the MDF and channel programs, where everyone is incented to say the same thing.  This happens every day in every technology category and with the ACPC it will be vital.
Wrapping up
I give Qualcomm and Microsoft kudos for driving this latest chapter of the valuable ACPC initiative. I do believe there are market segments who will trade-off performance for battery life. Intel is also participating in the ACPC initiative, but the company is leveraging their raw performance differentiator. To increase the degree of success, I think the target market needs narrowing, there should be a consistent spec to determine what is-is not an ACPC, target market-popular apps and peripherals need quick optimization and finally, all this needs to culminate in the channel and OEMs. Without this, the ACPC won’t see the degree of success it needs to fulfill its long-term vision.