The self-driving car trend is an undeniable one, with the biggest automakers in the world adopting connected car platforms already and more coming on board every month, it seems. These include Volkswagen Group as well as General Motors, two of the three biggest automakers in the world. Google, Bosch Ltd., Audi AG, Tesla Motors and General Motors already have cars on the road, and some are already in consumer vehicles while others are for research purposes.

With the modernization and electrification of vehicles, electronics as a percentage of the BOM (bill of materials) of the car has skyrocketed, and we haven’t seen anything yet. This will only become a higher percentage as piloted and self-driving vehicles start to become more commonplace. Up until this point, silicon brand and security hasn’t really mattered all that much as long as the functionality was there, and as a result, vendors simply implemented whatever met the utility, was more cost effective and passed regulatory rules. 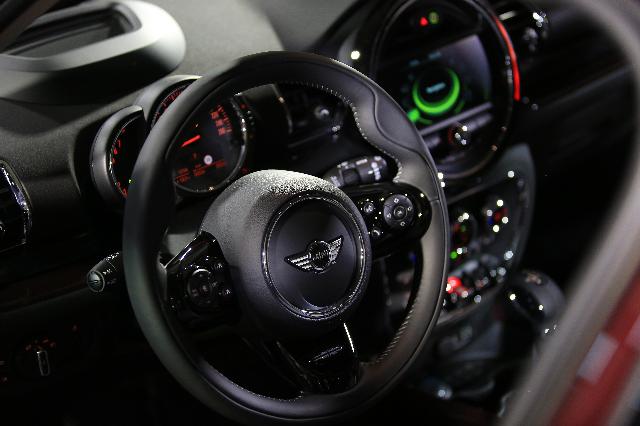 The steering wheel and dashboard sit inside a new Mini Clubman automobile, manufactured by Bayerische Motoren Werke AG (BMW), as it is unveiled in Berlin, Germany, on Wednesday, June 24, 2015. Mini, BMW’s urban-car brand, will cease production of its coupe, roadster and Paceman crossover, reversing course on a strategy of adding variants that failed to spark growth. Photographer: Krisztian Bocsi/Bloomberg

As the percentage of the BOM that is electronic components increases and features are added that could increase potential security risk, I believe that this will change, and branding and security will become more important.

I believe that if you are paying that much for a connected car experience, consumers will want to know what’s inside. Tesla Motors was a pioneer and understood this, which is why they promote NVIDIA so much. Auto makers see these connected car experiences as new revenue opportunities, and in order for many sub-segments of consumers to be convinced that these services and hardware are worth the money, they need to better illustrate value. Part of that value comes from a strong consumer brand, which can be supported by recognized technology companies, including the likes of Apple, Intel, NVIDIA and Qualcomm. Some of these systems come as part of much more expensive optional upgrades and attaching to well-known technology brands among millennials could help auto makers justify the costs.

In addition to branding, security or at least perceived security, will become an even more important factor in automobiles. Previously, people simply worried about people breaking into their cars with crowbars or wires, but now high-tech carjackers are breaking into cars remotely. Just think of all of the safety and security concerns with a vehicle that is fully in control of the driving experience at 65 Mph or more. Few really thinking that one through, yet.

One of the biggest potential concerns for automotive electronics security has been in the area of in-vehicle connectivity as it is seen as the primary vector of attack or vulnerability into a connected automotive system. In-vehicle connectivity is the gateway to the outside world, and if one can get out, one can get in. It’s the same challenge as enterprises and governments have every day.

There are also some non-technological challenges that exist in the enterprise tech industry related to security that are likely to spill over into the automotive industry. Those are most evident in the war between Cisco Systems, Huawei, the U.S. and Chinese governments. Perceived or real threat, both companies have huge issues in each other’s markets and as a result, have restricted business opportunities. The China 2016 mandate dictates that government entities must have full control over their hardware and software stacks, limiting U.S. involvement in the future. The same battle could be brewing in automotive electronics in the U.S. and Western Europe where similar concerns may be raised in terms of security, privacy and vehicle safety.

So what are the biggest chip makers doing inside cars? A lot. NVIDIA is doing pretty well inside of what many consider a leader in the electrification of cars, Tesla Motors.  In the U.S. connectivity market, Qualcomm has been the dominant provider of 3G/LTE connectivity in the car, with them powering almost all of General Motors vehicles as well as the OnStar service. Qualcomm’s challenge will be to maintain their current market share as the market continues to expand and welcome new players. Intel is also looking to challenge this position with a maturing portfolio of LTE products and partnerships with companies like Jaguar and Land Rover, owned by Tata Motors out of Mumbai, India.

However, Intel and Qualcomm both have a potential challenger in the telematics market place in the Chinese connectivity provider Hi-Sense technologies, owned by Huawei. Hi-Sense is looking to convince large U.S. and Western European automakers to adopt their lower-cost telematics solution. However, Hi-Sense is a relatively unknown name in the U.S., but is a large Chinese supplier of low-cost modem technologies that has struggled so far to take a foothold in the West. Now, through its partner and parent company, Huawei, who has a history in automotive technology integration, it’s looking for a way in to this growing market. This should be interesting.

There are a lot of opportunities in the connected car market in the coming years, and it looks like there will be no shortage of competitors. The real question will be whether or not system integrators, automakers, and chip makers will be able to overcome the perceptual and regulatory challenges in order to deliver solutions that add value to their products and ultimately help them improve the experience and sale price of vehicles with connected car experiences.

Automakers could find themselves in the unenviable position that datacenters found themselves in when they installed Huawei networking gear and were then asked by the U.S. government to stop. What’s different here is that it’s not that easy to rip and replace a telematics or self-driving system out once it has been installed into a car.

Unfortunately, the reality is that free markets between China and the U.S. don’t exist and the automakers and auto electronics makers like Volkswagen Group, General Motors, Google, Bosch Ltd., Audi AG, and Tesla Motors will need to start integrating that into their thinking.