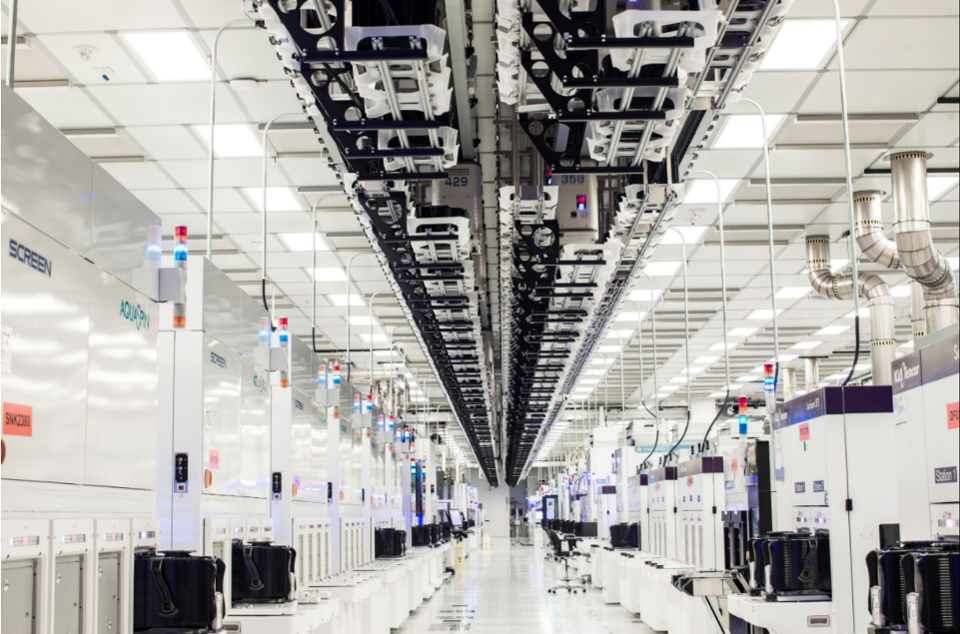 There has been more talk than ever in the past 18 months about the lack of high tech manufacturing in the US. This was highlighted in the recent election, and Apple was dragged through the mud a bit afterward with its China-only iPhone manufacturing. I was reminded last week that there is, in fact, bleeding edge technology manufacturing done in the US. I had the unique chance to tour the secret insides of GLOBALFOUNDRIES aka “GF” Fab 8 in Malta, New York, and want to share with you some of the key takeaways. After touring the facilities and meeting with senior executives, I can safely say the company’s claim of “the most advanced pure-play semiconductor factory campus in the U.S.” is accurate. If you want to listen to a podcast I did with Shrout Research analyst Ryan Shrout and Tom Caulfield, SVP of GlobalFoundries and GM, you can find it here.

First off, let me explain what a “fab” is for those who do not engage in “chippery.” A fab is a fancy name for a chip factory. There are many different classes of fabs, and the fabs that build chips with the most sophisticated technology are called “leading-edge.” There are only four companies with leading-edge fabs: GLOBALFOUNDRIES, Intel, Samsung Electronics, and Taiwan Semiconductor aka TSMC. Only GF and TSMC are pure-play “foundries” or those who build chips other companies design.  Intel and Samsung Electronics have some foundry business but are primarily are IDMs (integrated device manufacturers) and primarily build chips designed in-house. Intel’s foundry operations have been of a quick ramp but from a very small base. The Samsung Electronics foundry business has been hit or miss based on how many Apple designs it gets. 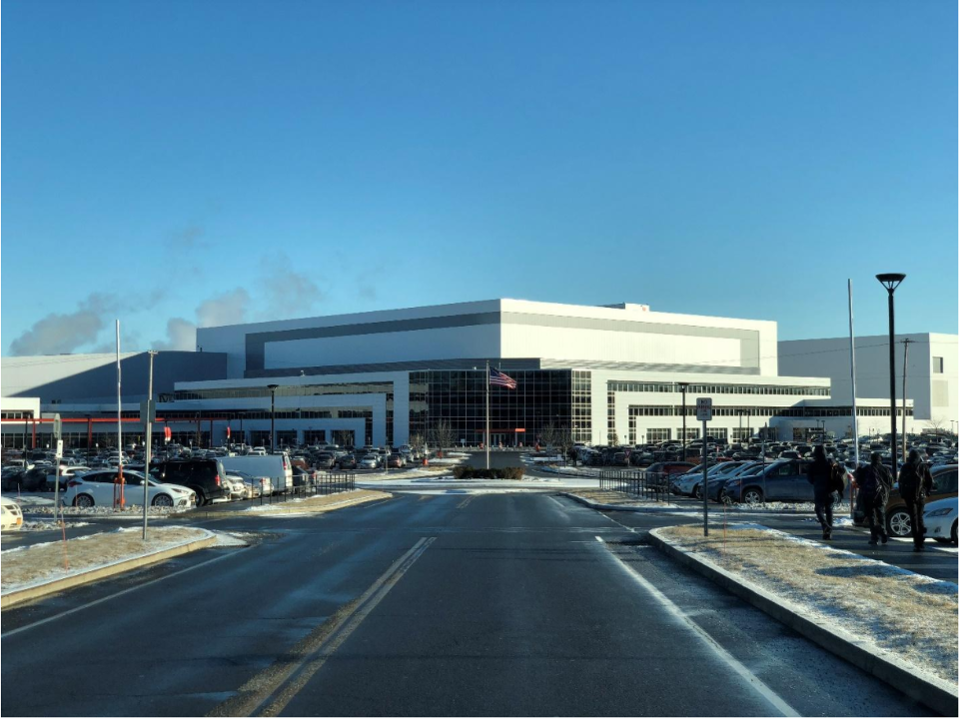 Before diving into Fab 8’s scale and the technical details, I wanted to first talk about the customers and products served from the fab. First off there is Advanced Micro Devices, where 100% of Ryzen, Epyc,  Vega Radeon and Polaris-based Radeon chips are built. These AMD products have resulted in a rebirth of the company which has driven the stock from $2 per share to where it stands today around $12.50. While unconfirmed, I also believe one of the AMD-based gaming console chips is built here as well.

AMD’s Epyc, Ryzen and Radeon Vega and Polaris are built at Fab 8.

IBM’s most sophisticated chips are starting to be built there too, including the recently launched POWER9 and the chip in the latest z14 mainframe. While unconfirmed, I also believe many of Apple’s 14nm A9 chips are built here given GF uses Samsung’s 14nm process and Apple required a second source. All these 14nm chips from AMD, IBM and Apple are very high-performance and compete with Intel Core and Xeon, NVIDIA GeForce, Quadro and Tesla and Qualcomm’s Snapdragon. 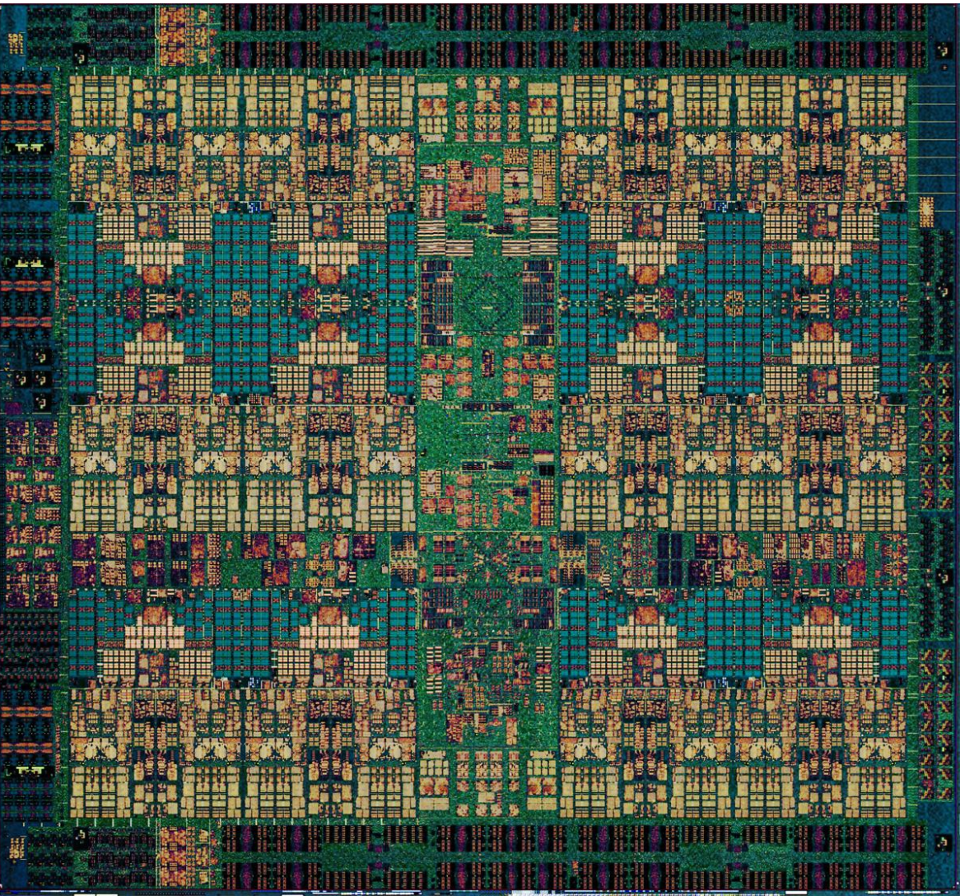 Leading-edge fabs are not cheap- they are prohibitively expensive and require an extremely complex and hard find ecosystem of universities like SUNY and Rensselaer, equipment suppliers like Applied Materials Inc. and KLA-Tencor Corp, material suppliers like DowDuPont Inc and Air Products and Chemicals, Inc., and advanced chip technology providers like IBM and Samsung Electronics. New York’s “Tech Valley” attracted this unique system and enabled Fab 8 to become a reality. New York offered GF $1.2B and in return, asked for a $3.2B GF investment, 1,200 direct headcount and $72M in payroll. What New York got back was much greater than what they asked for- GF made a $12B investment, created 3,300 direct headcounts, and pays $345M in payroll.

These are mind-boggling numbers when you think of it and New York made a good investment. One thing that struck me was the number of employees. While the clean rooms do not have many people inside them as they are extremely automated with robots and machines, all the supporting infrastructure does require many people. Fab 8 runs 24 hours a day, seven days a week in two, twelve-hour shifts. Most of the 3,300 employees are serving the infrastructure and supply needs of Fab 8, feeding and maintaining the robots and machines. Daily, Fab 8 requires the utility infrastructure of a small city, consuming 4 million gallons of water, 120 megawatts of electricity, and more than 11 million cubic feet of natural gas. Around 700 employees, researchers and scientists, are working on the next big thing as I outline below.

Currently, all of the chips manufactured in high-volume at Fab 8 are based on 14nm transistor gate widths, based on a jointly engineered technology with Samsung. While gate width is not the best indicator of cost per transistor anymore, it is still a factor. Leading-edge ASICs, CPUs, GPUs and networking chips use Fab 8’s “14LPP” technology. “LP” stands for “leading performance,” not “lowest power.”

Next up is a 12nm process called “12LP, which GF customers like AMD are already sampling with mass production already underway. AMD is citing April as their availability date for their new 2nd Generation Ryzens the company launched at CES 2018 and wrote about here. GF says 12LP provides a 15% circuit density improvement and a 10% performance boost which AMD echoed to me in January at CES. I consider this a “half-step”, and so does GF.

GF’s biggest leap in technology since 14nm will be “7LP” which is being developed and manufactured at Fab 8. GF says 7LP in mobile smartphone applications will deliver a 30% die cost reduction and a 40% performance boost over 14nm at a 55% power reduction. For higher-performance applications like CPUs for PCs and servers and graphics chips, GF is estimating an extra 10% performance bump over the smartphone figures. Risk production is slated to begin in the middle of this year, which would slate mass production a year later in 2019. This puts GF in the fast-follower camp with 7nm but should lower risk given later timeframes and the use of optical lithography.

GF Fab 8 is investing in EUV, and I saw one installed and calibrating EUV lithography machine and ten-ton cranes for three more with my own eyes. EUV, when combined with 7LP, could reduce mask layers by 20% over optical lithography, but I am glad GF is starting with optical as EUV is mind-bogglingly difficult. All you need to know about EUV lithography is that it starts with a 30,000-watt laser shot from three stories below the clean room, 50,000 times per second,  each time the laser fires it creates 2 laser pulses hitting tin droplets, the first pulse thins the droplet, the second pulse creates a plasma (like the sun), the resulting plasma generates the EUV light with 250 watts of power. No, I’m not kidding- 30,000 watts laser beams shot 36’ creating plasma as hot as the sun. Thanks to IBM Research’s Dan Corliss on educating me a bit more on the EUV process. 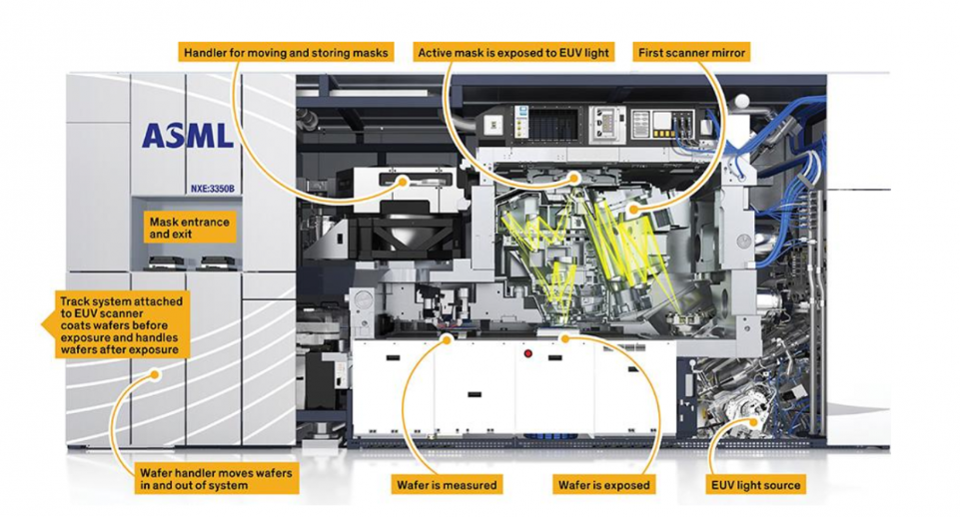 EUV lithography is tricky laser business and yet to be perfected

As the insatiable demand for high-performance silicon is increasing with CPUs, GPUs and ASICs, so does the need to layer different pieces of silicon on top of each other, which GF refers to as “packaging.” This is not to be confused with final, green organic packaging the die sits in. A good recent example is the layering of AMD’s Vega which stacks HBM2 memory on top of the GPU. GF is working on even more advanced layering techniques like silicon photonics. GF sees a big machine learning opportunity here, and I do too. 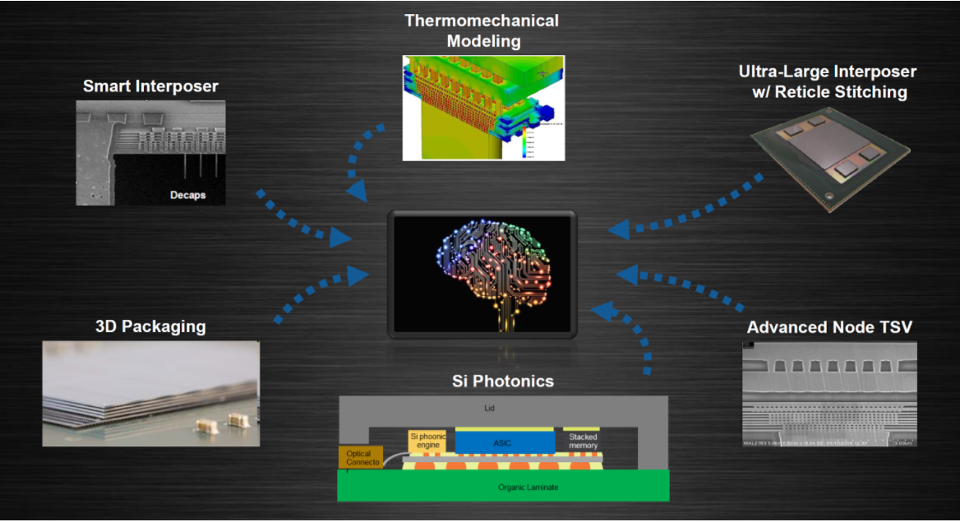 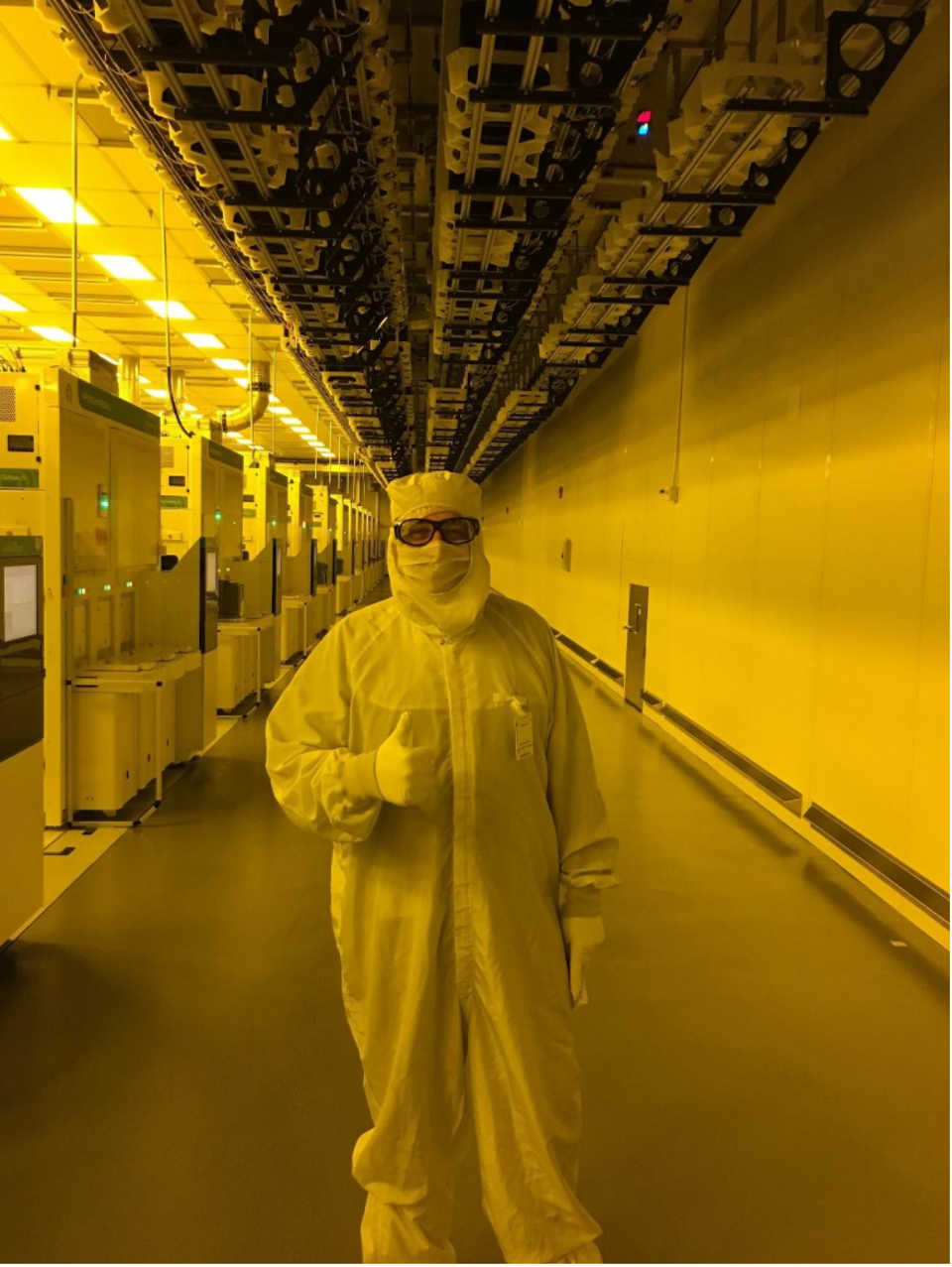 Unknown to many, in Malta, NY, GLOBALFOUNDRIES has the most advanced pure-play foundry in the U.S. and one of the sophisticated chip fabs on the planet with Fab 8. While I was a bit skeptical of GF’s performance five years ago, based on the company’s performance with 14nm and what they did for AMD is all the proof I need to become a believer. When I combine GF’s Fab 8 leading-edge capabilities with the industry-first FDX capabilities and what is happening with fully-depleted SOI and silicon germanium and how that helps 5G RF, GF’s full opportunity come into focus. To be fair, there is a tremendous amount of flawless execution that has to happen, but if GF does execute, there is no reason to think the company cannot take some serious share from Taiwan Semiconductor over the next three years.  GF could also make it more difficult for Samsung Electronics to expand their foundry business and for Intel to start driving more volume within its foundry operations.