Today, Motorola Mobility announced the Motorola RAZR i for Europe and Latin America.  The phone is very similar to 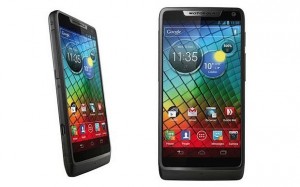 North America’s RAZR m, but instead of a Qualcomm, ARM-based SOC, it includes an Intel Atom-based X86 processor.   This announcement is significant for Intel and the industry for many reasons, including Intel’s first big brand phone in a unique industrial design and the increased use of Intel Inside which could become an industry disruptor.

Intel had its challenges in mobility over the past few years with its Menlow and Moorestown products as there were many promises made but very few smartphone products shipped.  Things changed dramatically with the delivery of the Intel’s Medfield SOC and with the Infineon wireless acquisition.  Medfield shocked all industry watchers in that it was the first Intel mobile SOC that performed well and got good battery life. Shocking too was Intel’s ability to use binary instruction set conversion in Android to make specific applications that embedded ARM instructions work well on the X86 platform.  So far, so good on compatibility as I haven’t even heard of any meaningful compatibility challenges with Android apps.

Medfield pulled in the first wave of phones from Lenovo and  ZTE in China, Lava in India, Orange in U.K. and France, and MegaFon in Russia. The phones were good at their price points, but not great, and the designs looked like derivatives of the Intel-designed phone. The phone industry watchers were pleased at a good start by Intel, but wanted to see a global brand in a unique phone.  This is where the Motorola RAZR i comes into play.

The Motorola RAZR i

In a discussion with Intel’s vice president and general manager of Intel’s Mobile and Communications Group, Mike Bell and Motorola, it was apparent that both sides were very excited.  I don’t mean the traditional “oh it’s a launch and I have to be excited” tone.  This was for real.

Like the RAZRM m, the RAZR i has an edge to edge, 4.3” Super AMOLED display, Gorilla Glass, aluminum display frame, KEVLAR backing, and splash proof coating. Unlike the RAZR m, the RAZR i is powered by an Intel Atom SOC clocked at 2GHz.   It has a single core SOC and is “hyperthreaded”, meaning it can process two operations, or threads, at the same time.  On paper, this approach should save power as most phone operations are single threaded and you don’t have to burn a full second core to do this.

Motorola and Intel said that the 2Ghz SOC will help with many different usage models, including web browsing, multitasking, games and imaging with its 8MP camera.  Without using the RAZR i or even reading detailed reviews, the faster web and multitasking messaging makes complete and total sense as Intel performs very well here and this can get only faster as they’ve boosted clocks to 2GHz.    The improvements on games makes sense, too, given it includes a very highly clocked Imagination Technologies graphics core and  should be even clocked higher with the CPU boost.  I will wait to use the phone and wait for reviews before commenting on the camera.  The features look very impressive as it can take 10 pictures in a second, but quality is key here, too, and I need to use a unit first.  These functions are primarily handled by the Hive-based ISP and don’t have a lot to do with a 2GHz processor anyways.

Motorola says that the RAZR i achieves “20 hours of combined usage time”.  The footnote says, “Battery life based on an average user profile that includes both usage and standby time.  Actual battery performance will vary and depend on signal strength, network configuration, features selected, and voice, data and other application usage patterns.”  I have to say that is quite vague.  What is more useful is what Apple discloses which comprises detailed talk time, web browsing, video, music, and standby.  I really cannot even comment on the RAZR i battery life until I see some of these figures broken out which I am sure will be available as reviewers put the phone through its paces.  As previous Intel-based phones have very respectable battery life in their class, I’d expect better battery life as Motorola has packed a 2,000 mAH battery inside but we will have to wait for reviews to see the impact of the Super AMOLED display and Motorola software load.

Intel has spent over $1B in marketing each year for at least the last 15 years.  They have built a highly-ranked brand on consumer awareness measurements, and amongst techies very high awareness and familiarity.  In the PC and server space they have high degrees of preference as well with the “processor-aware” crowd.  The smartphone market is different, though in that heavy-duty ingredient branding hasn’t been used… yet.  One major thing I noticed for this launch was the proliferation of Intel and Intel inside branding and sub-branding.  It is evident in the web, print and video assets shown at today’s event, even down to the Intel jingle at the end of the commercial. Below are are a few examples.

Kevlar backing of the RAZR i

This is a very significant industry dynamic as Intel is now running similar marketing “plays” in the smartphone as they have used in the PC market.  The impact on the PC market was pronounced as both the distribution channels and the PC makers became very dependent on Intel Inside dollars to fund their marketing operations. Imagine if this dynamic catches hold in the smartphone market.  It could be very disruptive to smartphone distribution, brands and consumers and could quite possibly give Intel the leg up they need to gain more handset design wins and sell even more phones.  Qualcomm, NVIDIA and TI will need to reevaluate how they combat something like this.

Some phone brands look at the PC market and want to stay as far away from that brand dynamic as possible  as they see Intel’s brand as dominating theirs.  Others see this as a great opportunity to leverage Intel’s brand, potential gain share, and amplify their own marketing dollars.  Industry watchers need to keep their eye on this dynamic as it will be a potential disruptor in the smartphone ecosystem.

The Motorola RAZR i smartphone announcement with Intel is very significant on many levels.  First, Intel gets a big-named brand in Motorola, who, while has faded in share of late has a very solid brand profile.  Secondly, the RAZR I has a unique industrial design with unique features which set it apart from the Intel-designed skins from the previous launches.  I am very, very interested to see how well the phone performs and in battery life given a highly-clocked Intel Atom at 2Ghz combined with a 2,000 mAH battery while still only 8.3mm thin.  Finally, and most significant, is Intel raising the stakes in smartphone component branding.  This branding dynamic will have more of an industry impact than even the RAZR i itself and has the potential of being a major disruptor.