Home automation for years has been the domain of home installers outfitting wealthy consumers with $10,000- $100,000 setups to control lights, home theater, security, air conditioning, and home audio.  After many fits 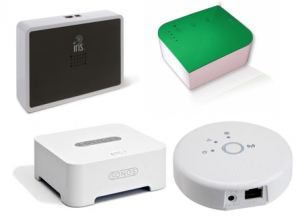 and starts, more mainstream home automation appears to be growing out of that rich niche as evidenced by all the DIY (do it yourself) products on the market. These are brands like Nest, Hue, Kwikset, Sonos, Korus, Dropcam, Honeywell, Yale, Iris, Insteon and Belkin that individually control you’re A/C, lights, locks, cameras, home audio, garage door, window shades, and anything with a plug. These new devices are great, but in aggregate when used at the same time actually create a new set of consumer problems which I want to explore in this column.

It seems like I can’t go a week without seeing a new announcement on a DIY home automation product.  CES and CEDIA are the trade show kings of this market and have rows or buildings dedicated to the category.  Even Amazon has jumped onto the bandwagon, opening up a home automation store within a store.  There are two distinct sets of people who are buying these devices; technology mavens and home automation enthusiasts. The mavens buy home automation because they want to be first with cool, new technology.  The enthusiasts have been experimenting for years and the new products are just their next generation.

The challenge with all these products comes in aggregate when consumers start buying a lot of them.  What if the consumer bought a Nest thermostat, Kwikset door lock, Phillips Hue lighting, Lutron light switch, a Sonos audio system, and a bunch of Belkin wireless plugs?  First, the consumer would have six different apps to setup, learn and use that all look and feel different.   Additionally, there aren’t easy ways to make the devices work as one system if you wanted to trigger an event after an event.  What if I wanted my outdoor lights to turn on after the garage door unlocks?  That’s not going to happen because it requires two separate apps.

There are two ways to get around this.  The first is to go to a service and device aggregator like AT&T with their Digital Life service where they provide one app and a consolidated wireless adapter box. The consumer makes a multi-year service agreement similar to a phone which decreases the initial cash outlay. Bundles start at $55 per month with two year commit and a $450 equipment charge to $65 per month with an $800 outlay. Like AT&T in cable services, the consumer is unlikely to get best in breed in hardware, software, or services.

The other approach is where a company enables consumers to buy the best in breed end point products, but integrates the hardware and software. This means creating one app from the disparate apps and consolidating all of the wireless adapters. One company, called Revolv, is intent on doing this exact thing. Revolv is pulling all the disparate wireless boxes into one box and pulling the disparate apps into one app.

At launch in Q4, Revolv says they will support the following devices with one wireless hub and one app:

As you can see, out of the box, Revolv is supporting multiple devices and protocols. The wireless hub is capable in the future of supporting a myrid set of different types of devices as it includes proprietary 900MHz and 433MHz adapters, and I expect many other devices based on Insteon, Z-Wave, WiFi and Zigbee. Revolv has a very open and comprehensive approach with a veteran team and investors, they’re not the only ones attempting to solve similar problems.  SmartThings is a Kickstarter project and Mi Casa Verde is another attempt to wade through multiple apps and multiple wireless devices.

Wireless home automation has been attempted for decades with minimal success. The technology has now improved to the point where it’s cost effective, and mobile platforms added to the ease of use and added a large ecosystem of app developers.  Home automation’s newfound success could hinder it given the multiple apps and multiple wireless protocols supported by different devices.  Companies like Revolv are taking different approaches to AT&T to help solve this very complex problem. In my next column on home automation, I will dive further into Revolv’ s smart home automation solution from a consumer’s point of view.