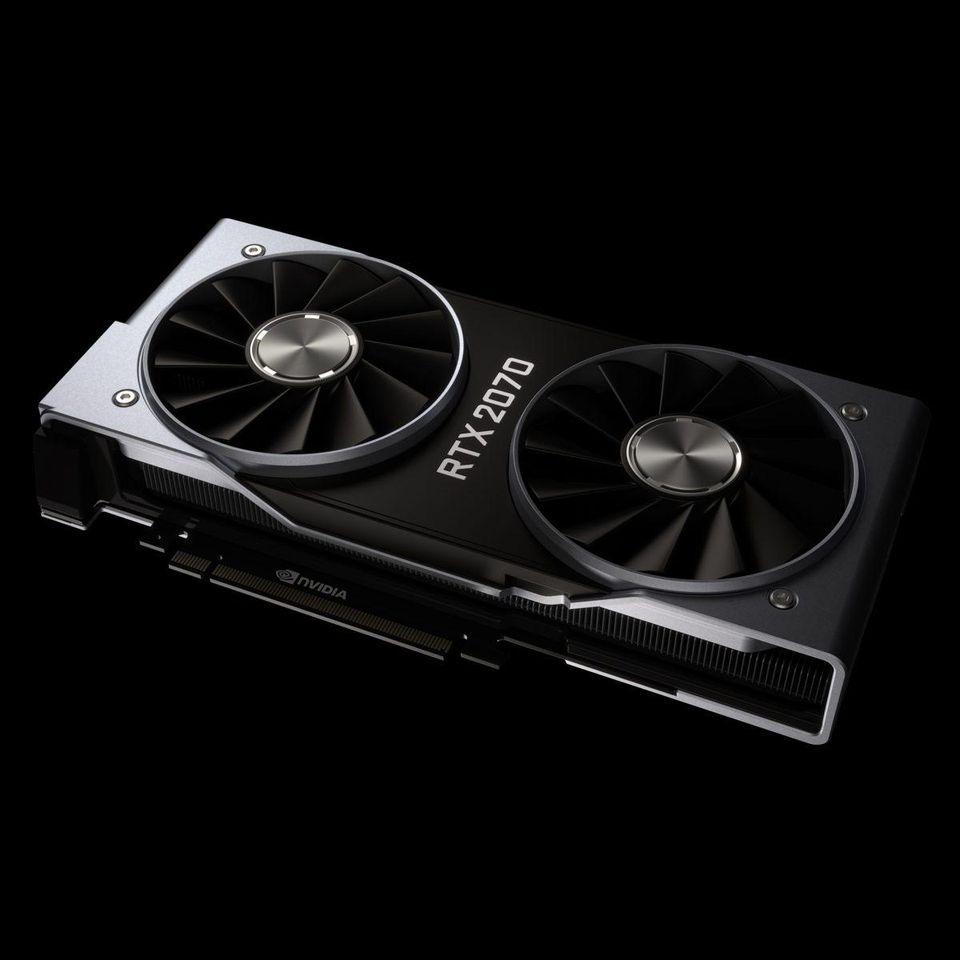 This week NVIDIA continued the rollout of its GeForce RTX 20 line of gaming graphics cards, with the release of the new mid-range RTX 2070. Significantly more affordable than the recently launched 2080 and 2080 Ti (which Moor Insights & Strategy Analyst Anshel Sag benchmarked and reviewed here), the RTX 2070 is also built on NVIDIA’s Turing architecture. The ‘70’ models are NVIDIA’s middle of the road offerings, and the 2070 should be compared to the GTX 1070 model of the previous generation. While I have not gotten the chance to personally review the new RTX 2070, I’ve been paying close attention to the press and reviews around it. Today I wanted to talk about the new graphics card and share a few of the themes that have emerged in its early coverage.

Like the GeForce RTX 2080 and RTX 2080 Ti, the 2070 features Ray Tracing (RT) cores and Tensor cores. The RTX 2070 certainly has fewer of these than the 2080 (36 RT and 288 Tensor cores, versus the 2080’s 46 and 368, respectively). Additionally, the 2070 sports 2,304 CUDA cores versus the 2080’s 2,944. While the 2070 packs fewer cores and less of a punch than the 2080, most reviewers concur that it deserves credit for being the least expensive option on the market capable of Ray Tracing (a technology that makes the lighting look more realistic within games). IGN points out that, at this point, it’s impossible to know how much the fewer RT cores will affect the performance of RT capabilities since this technology is still in its infancy. The 2070’s Turing architecture also renders it compatible with Deep Learning Super-Sampling (or DLSS) technology, which promises to utilize AI to create better imagery within games. Though there aren’t any games on the market yet that implement Ray Tracing and DLSS, early reviews seem to agree that the 2070 deserves kudos for being set up to handle these forward-looking technologies.  NVIDIA did announce that over 20 titles are in the works supporting DLSS.

The RTX 2070 features 8GB of GDDR6 memory with a 14Gbps memory clock (versus its predecessor’s GDDR5, with its 8Gps memory clock). Additionally, it features a 1710MHz factory-overclocked boost clock. Memory bandwidth is key to achieving 4K resolution, and the 2070 is a marked step up from its predecessor. Not only does it feature 448 Gbps of memory bandwidth, it’s worth noting that the 2070 sports the same memory configuration as the high-end 2080 (though the 2080 Ti kicks it up a notch to 616 Gbps). PCWorld says that the 2070 provides great 1440p and entry-level 4K. This seems to more or less be the consensus across the board. TechRadar notes that the 2070 puts 4K “within reach,” which is an accomplishment in itself for a mid-range graphics card. Another thing worth noting is that the RTX 2070 is faster than a GTX 1080 and that can only improve as RT Cores and Tensor Cores gain traction.

One thing that most reviewers dinged the 2070 for is its lack of support for SLI with NVLink. NVLink and SLI connectors are noticeably absent on the card, which means no multi-GPU configurations for the 2070.  TechRadar called this a “letdown,” lamenting the fact that users would have to drop money on a higher-end graphics card if they’re looking for this capability. However, most users still only use one graphics card and one can even see that both AMD and NVIDIA have put significantly less emphasis on multi-GPU configurations than they have in the past. Nowadays, most systems are running one or two GPUs and almost no systems run on three or four GPUs anymore which used to be a popular configuration for the ultimate gaming PCs.

While the flagship 2080 and 2080 Ti are undeniably impressive, the price tag on the cards is enough to turn off anyone but the most serious gamers with the deepest pockets. The Founder’s Edition of the 2070 will run for $600, while the AIB partner editions of the cards start for as low as $500. Because the AIB cards are going to be a solid $100 less expensive, I believe that these will be the cards that consumers will gravitate towards at first. The AIB partner cards will also have the most variation in design, capability, and pricing compared to NVIDIA’s Founder’s Edition RTX 2070. Prices for the RTX 2070 will stabilize around the lower price point and the GTX 1080 will become increasingly difficult to find as well.

Early reviewers are appreciative of the lower price tag, but some, such as TweakTown’s Anthony Garreffa, expressed caution about making any value judgment until the price point stabilizes. That’s fair, but pay attention as prices change it seems on a daily basis.  Hot Hardware concludes that the RTX 2070 represents the “best performance per dollar” available on the market right now, and IGN calls it “as close to a value proposition you’re going to find with a Turing-based card.”

All in all, the 2070 looks to be a solid offering that gives consumers a more affordable option to get their hands on the Turing architecture and the forward-looking technologies (such as Ray Tracing and DLSS) it enables. Right now, I believe that the RTX 2070 is best presented as a custom card from AIB partners that can find ways to optimize cost and performance. Additionally, there is still extra value in the Tensor and RT cores which, I believe, many are overlooking because of the lack of content for them right now. I believe it’s a mistake that some are putting zero value in these cores because NVIDIA has already announced a large group of developers and titles that will utilize one or all of the RTX technologies. I look forward to getting a chance to try one out firsthand.