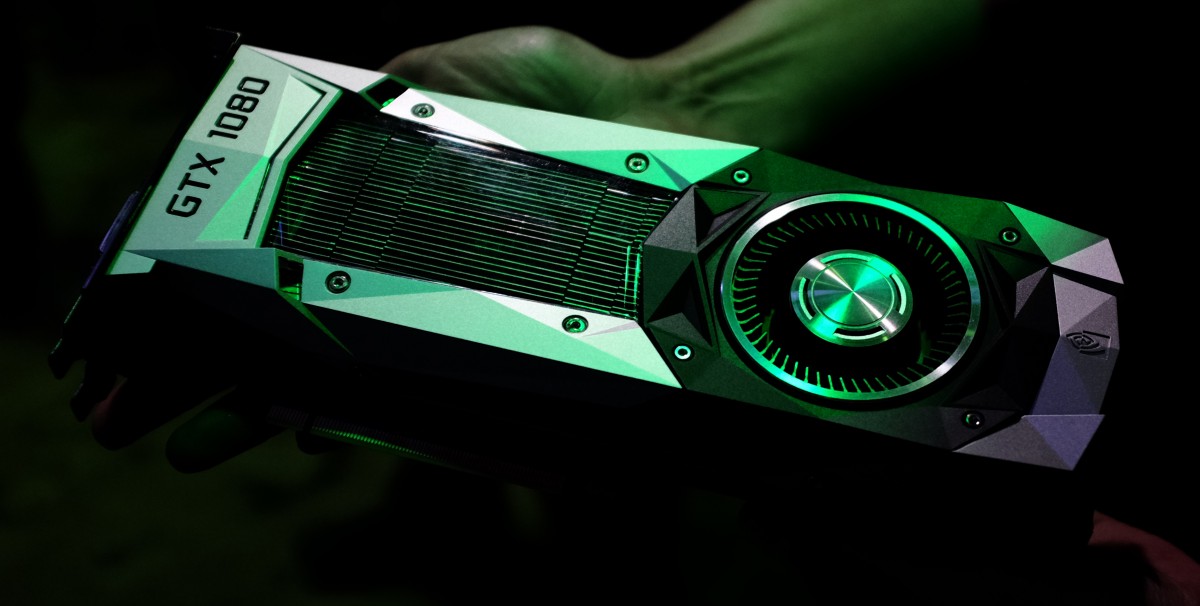 For our testing, we ran multiple performance benchmarks including the industry standard Futuremark 3DMark Fire Strike Ultra v1.1 as well as Valve’s SteamVR benchmark. For real game benchmarks, we tested multiple new games which include Rainbow 6 Siege, Ashes of the Singularity, Hitman and Doom. Some Rainbow 6 Siege was tested in (DirectX 11) DX11 while Ashes of the Singularity and Hitman were tested in DirectX 12 (DX12). Doom does not use DirectX so it was tested using OpenGL 4.5, however the game developer indicated at the GeForce GTX 1080 Editor’s Day that they would be releasing a Vulkan patch to the game shortly. Also, because Doom does not have a built-in game benchmark, we were only able to test FRAPS frame-rates for the 1080 over a certain period of time. Doom is a very new game and hopefully will add a benchmarking mode along with the Vulkan update. In terms of drivers, the NVIDIA GPUs were all tested using the 386.16 Windows 10 driver and Advanced Micro Devices GPUs were tested with the 16.5.2.1 driver.

The GPUs we tested were the GeForce GTX 1080, GeForce GTX 980 Ti and Radeon R9 Fury X. The test bench used for these results utilized an Intel Core i7 5960X 8 Core CPU along with an ASUS X99 Deluxe motherboard with 32GB of DDR4 2666 with a 512GB Samsung Evo SSD and Corsair CM750 PSU. Pricing of all GPUs was calculated using Newegg.com live data and in-stock models of the Fury X and 980 Ti excluding most overclocked versions of the 980 Ti since the version tested is not overclocked and none ofAdvanced Micro Devices’ Fury X GPUs are offered overclocked. The average of the GPUs listed on Newegg was compiled and compared against the frame rates of the games and benchmarks tested. The price of the GTX 1080 is being listed at is $699 because the Founder’s Edition of the card will be the only version available at launch and the foreseeable future and until we see other versions that match the $599 MSRP price we will have to go by that. However, we will include the $599 comparison so that you can see what the price per performance should be for the MSRP version of the GTX 1080. 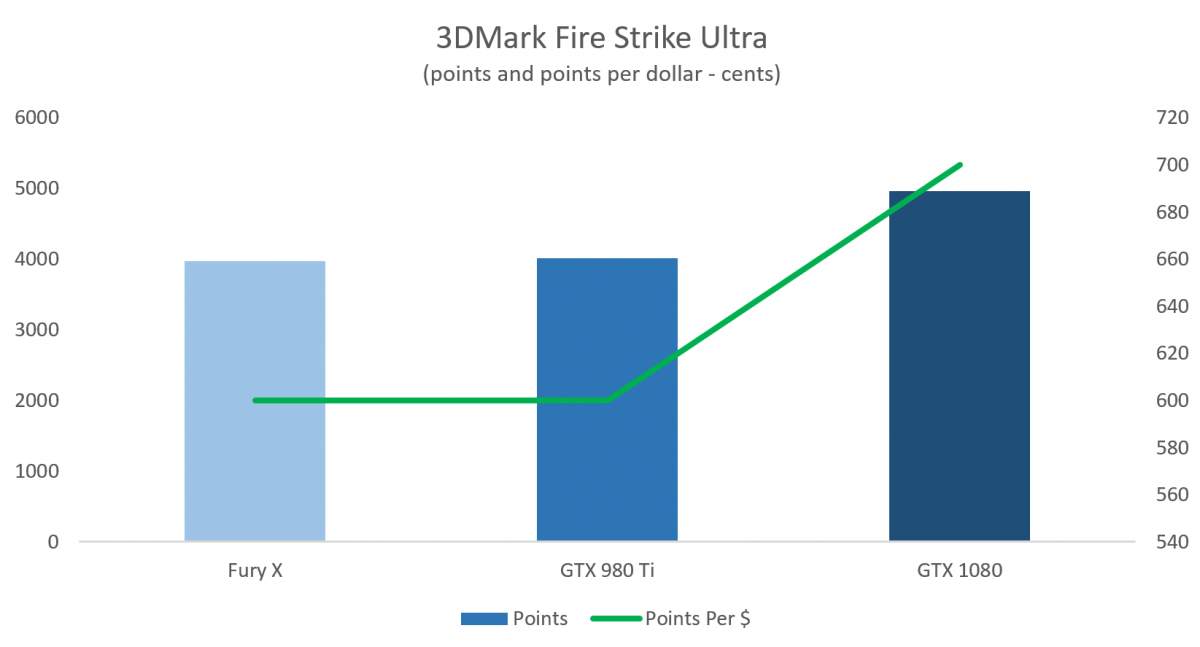 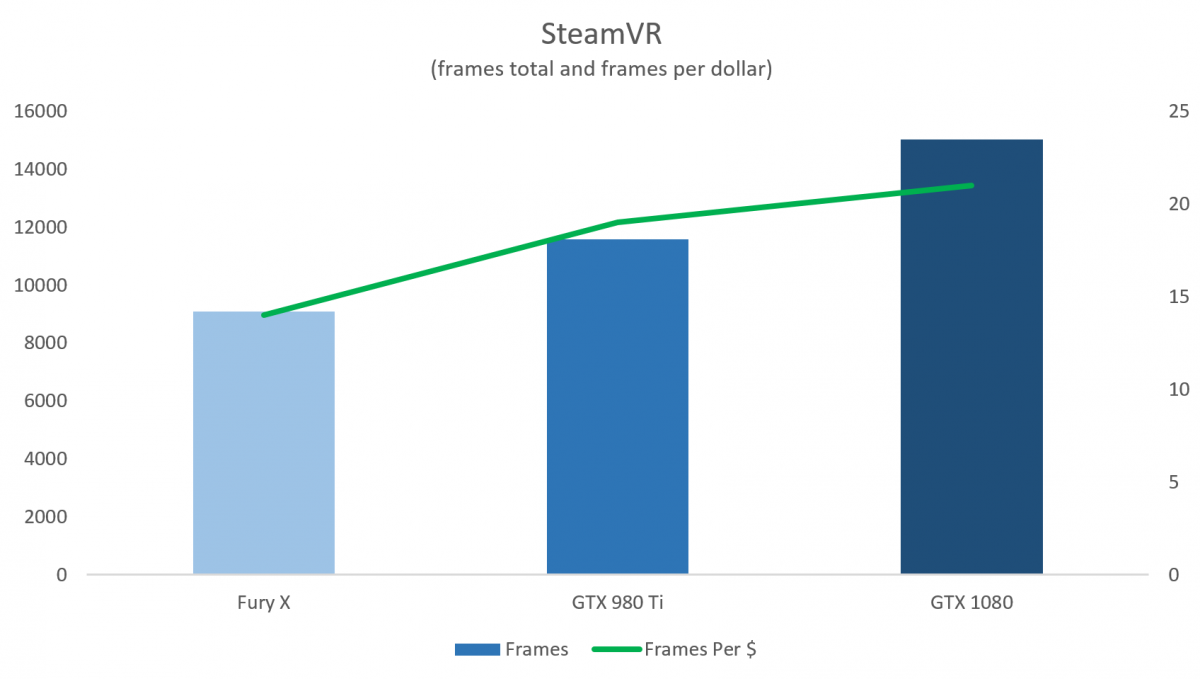 For the game benchmarks, we flipped the performance per dollar metric to dollars per FPS since the frame rates of all these games is significantly lower than the price of the GPU and make for some weird numbers. As a result, in this metric higher FPS is better and lower dollars per FPS is better, indicating more value. 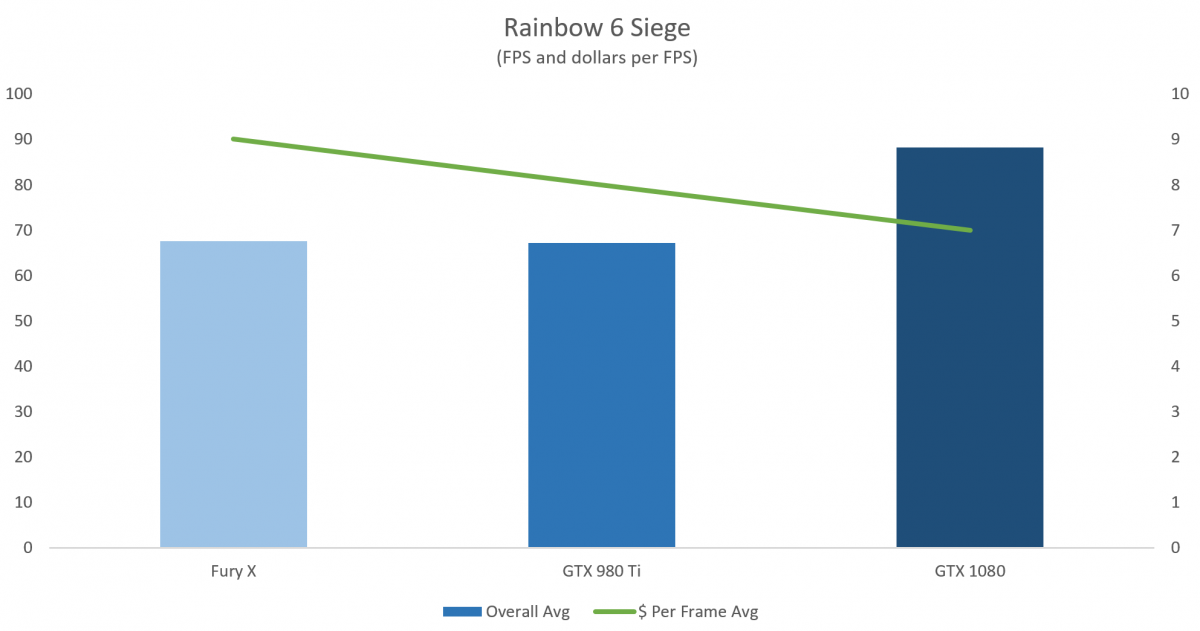 For Ashes of the Singularity, we tested all of the GPUs in DX12 which is where NVIDIA has struggled against Advanced Micro Devices. In Ashes, we saw the AMD Radeon Fury X scoring an average FPS of 42 while the GTX 980 Ti scored a lower 35.8 FPS. This is in line with most expectations and observations we’ve seen since this game came out. What was the most surprising was to see how much NVIDIA has improved DX12 performance with the GTX 1080 delivering 46.9 FPS. The GTX 1080 beats the Fury X by 12% which is a pretty big deal when you realize that the Fury X is beating the 980 Ti by 17%. This performance difference between the GTX 980 Ti and GTX 1080 comes out to about 30% from one generation to the next. In terms of dollars per FPS, we are looking at $15 for the Fury X, $16 for the 980 Ti and $14 for the 1080. At the $599 MSRP pricing, when available, this number comes down to $12 per frame for the 1080 which is still the best of the bunch.

For Hitman, we tested all three GPUs in DX12 mode even though they could also be run in DX11. This is because DX12 is the future API and that performance should be measured. In this benchmark, we saw The GTX 1080 once again winning by a sizeable margin at an average GPU FPS of 78.56 with the Fury X coming in at 67.93 FPS and the 980 Ti at 56.99. The GTX 1080 comes out to being about 16% faster than the Fury X in Hitman DX12 and 37% faster than the 980 Ti. This translates to the GTX 1080 winning the dollars per frame comparison again with $8 per FPS while the Fury X is $9 per FPS and 980 Ti $10 per FPS. If the $599 MSRP is considered, the 1080’s $ per FPS drops to $7 per FPS which is once again leading the pack. Additionally, we tested DX11 versus DX12 performance with the GTX 1080 and the GTX 1080 was actually faster in DX12 which traditionally was not the case with the previous generation GTX 980 Ti. In DX11 mode, the GTX 1080 delivered 75.79 FPS while in DX12 mode it was the previously stated 78.56 FPS, which indicates to me that Nvidia has done some serious work with their architecture and drivers to improve DX12 performance relative to DX11.

Last but not least was Doom, which unfortunately we weren’t able to test consistently across all GPUs. In this benchmark we used FRAPs to test the minimum, average and maximum frame rate while running the game at 1440P and using the absolute maximum graphical settings including the Nightmare settings for a few options. In our testing the GTX 1080 performed at an average of 103.11 FPS which is amazing when you consider that this is a brand new game and the GTX 1080 is already able to run it at 100 FPS with maximum settings. The minimum FPS was 72 and the maximum FPS was 149. This means that the GTX 1080 is such a good GPU that it is already able to run brand new release games at maximum frame rates and in games like Doom that’s really important because the game is extremely fast paced and you want as high and consistent of an FPS as possible.

In terms of overclocking and thermals, this GPU did extremely well. I wanted to verify NVIDIA’s claims about thermals and overclocking so we overclocked the GTX 1080 up to 2.138 GHz while running the fan at 100% (4000 RPM) and were able to get an artifact-free stable overclock and test of the SteamVR benchmark. During overclocking, with the fan at 100% the GPU never went over 61C which is about where NVIDIA had claimed they were able to overclock the GPU (they didn’t say what fan speed). Under normal testing, the highest temperature we ever saw with the GTX 1080 was during the SteamVR benchmark and that was 81C. 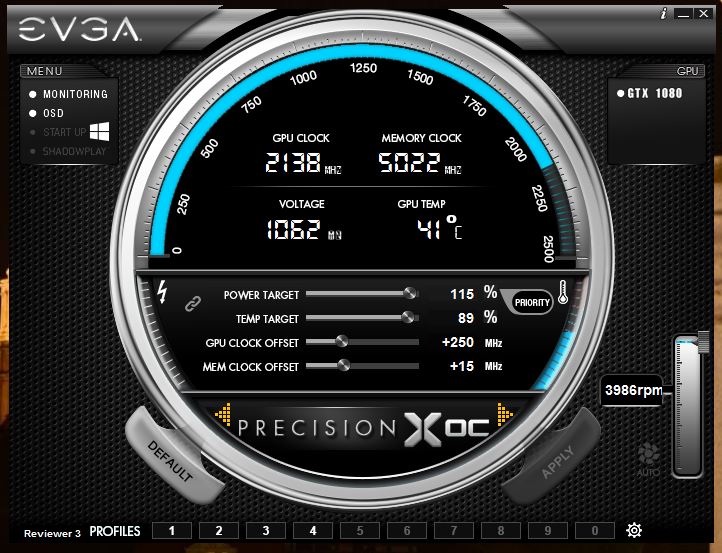 In SteamVR, overclock testing yielded an increase of about 10% which is pretty impressive considering the overclock was entirely free and we could very likely see AIBs accomplishing these kinds of overclocks and selling them to consumers. I believe that 16,457 frames as tested on the GTX 1080 may be the highest tested result among any single GPU configuration ever tested on SteamVR. 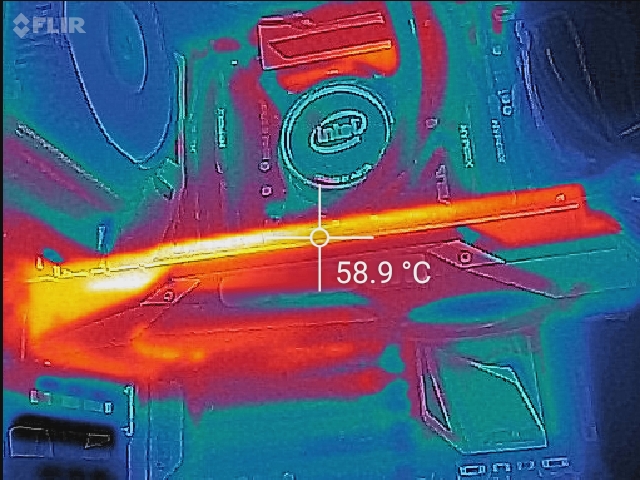 The GTX 1080 is an absolutely amazing enthusiast GPU from virtually any angle you look at it. NVIDIA has succeeded in not only making the fastest GPU, but also making one of the fastest graphics cards on earth. At the current $699 price for the Founder’s Edition, it still is a bit on the pricey side, but the level of performance is so great that it still is a better value than the GTX 980 Ti and Fury X when measuring FPS per dollar. I expect that the GTX 1070 will beat the GTX 1080 in terms of FPS per dollar, but that GPU is not going to be as fast or available for quite some time. The $599 MSRP price that has been stated for the GTX 1080 will be available from AIBs ‘soon’ but we do know that the first batches of the 1080 will be $699 Founders Edition cards. The $599 price, when available will make the GTX 1080 extremely hard to beat in nearly any metric and that alone is a testament to how great of a job NVIDIA has done with this GPU. Once the $599 and $379 versions of the GTX 1080 and 1070 become readily available, I would expect some serious downward pressures on GPU prices which will only benefit enthusiast gamers and the adoption of high-end VR.