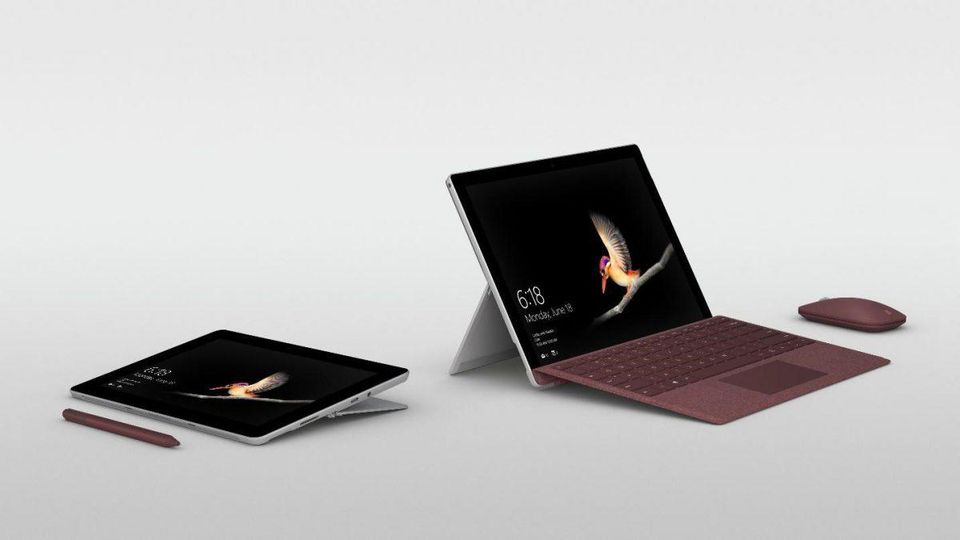 Since Microsoft introduced the Surface for Windows RT in 2012, the company never went directly head-to-head with the Apple iPad. For years, Microsoft and the Surface team intelligently focused on full-up, Windows detachable 2:1 computers that could run full Windows desktop programs and Store apps, and worked with multiple inputs- finger, keyboard, mouse and of course, pen. Surface Pro was modular, too, with docks for external devices like two 4K displays, mice, keyboard, printers, USB-sticks and even external storage. The Surface team created a hit with the Surface Pro which not only legitimized a new product category, and some would say, forced Apple’s hand to create iPad Pro which had Pencil input and optional keyboard.  Today, Microsoft announced the Surface Go, a 10”, Windows 10 detachable 2:1 computer starting at $399 that very much attempts to broadside the Apple iPad 9.7” (starting at $329) and iPad Pro 10.5” (starting at $649).

The Surface Go has a 10”, 3:2 ratio PixelSense display at 1,800×1,200 resolution, which equates to 217 PPI.  I haven’t seen or used the Go yet, so while I cannot give a testimony on the display quality, I do know that anything with the PixelSense brand has been high quality, so I will give Microsoft the benefit of the doubt. Go also supports pen input up to 4,096 pressure points, which is quite impressive for a $399 device, and certainly should be good enough to take notes and draw.

Surface Go is light at 1.15 pounds and thin at 8.3mm. Comparatively this is similar to the iPad at 1.03-1.05 lbs, but also consider the Go has a built-in kickstand. Go is a bit thicker, too, versus the iPad at 6.1-7.7mm, but this isn’t something anyone will notice. At this size, users can easily use it with one hand and pretty much carry it anywhere.

When I get a unit to test, I will be interested in running full Office 365 and gauge the experience. Much of that experience will be powered by an Intel 7th Generation Pentium Gold Processor 4415Y. This processor is a two core, four thread, Kaby-Lake processor running at 1.6GHz. base clocks and 4.5 watts, enabling a fanless design. I have never benchmarked this processor, but Microsoft says it should perform like the processor in the Surface Pro 3. I am hoping the compare is to the Core i5 version as that would be impressive. Again, I will have to run some benchmarks and use the system to tell you how it performs. The Surface team told me they enhanced Windows 10 for this unit to be more responsive, and I can’t wait to dig in.

Microsoft says the Surface Go can display videos for nine hours. The Surface team has used the local video playback metric which is easy to compare and many consumers have embraced it, but I am personally more interested in how long I can run Office and Edge without plugging in.  If the Surface Go were maximizing for battery life, it would have used a Qualcomm Snapdragon 835 or waited for the 850 which can deliver over 20 hours of video playback. Microsoft chose application compatibility and likely Office performance over battery life. I will have to test the Surface Go to see for sure. But then again, Apple quotes “up to 10 hours of surfing the web on Wi-Fi, watching video, or listening to music”, so maybe that was the metric.

As the Surface Go is a detachable 2:1, it has an optional keyboard and mouse.  The new Typecover has a healthy 1mm key travel, a “larger than you’d expect” glass trackpad and made of Alcantara like the other recent Surface products. Alcantara scared me at first, but I’ve grown to really like it as long as I’m not typing and eating a PB&J sandwich at the same time.  While I’ll have to test the unit to render an experience verdict, the Surface team has mastered the modular keyboard experience.

Like other Surfaces, and for that matter, Windows PCs, has a lot of external modularity. Go has a proprietary Surface Connect port for charging and docking. I have used my optional Surface Dock with other Surfaces to power two external displays, printer and a wired heavy-duty keyboard and mouse. The device also has one USB-C 3.1 port for data, video, and charging. I will be very interested to see what I can/cannot plug into this port and am excited if I can trickle charge it with a USB-C phone charger like I can with many of my Always Connected PCs. Like all other Surfaces that came before it, Go has a headphone jack and a MicroSDXC card reader to increase storage.

While initial versions of Surface Go come with 802.11ac WiFi, Microsoft says future versions will come optional with LTE in the fall. Details aren’t available yet on speeds, antenna configurations or carrier support.  I am hoping these will all come with Gigabit-class supporting 3-4X carrier aggregation, 256 QAM and 4×4 MIMO and it will be easy to choose from multiple carriers for service using eSIM.

If the new Surface Go delivers the experience as it should on paper, I think Microsoft will sell truckloads of them. While I don’t know the impact to the experience of the $399 model with 4GB RAM and 64GB eMMC storage, that opening price point is huge, and likely targeted to education. I really like that it appears that Microsoft stuck to the Surface brand promise with its magnesium chassis, full friction hinge, PixelSense Display with 4,096 point pressure points and tilt support, Windows Hello face unlock, Surface Dock capable and optional Alcantara keyboard and pen. Microsoft could have gone cheaper and damaged the brand, but it didn’t. I think Microsoft has a winner here, but I will need to evaluate it first.