While there has been a lot of debate on what “open” means, what everyone in technology can agree on is that open standards are one of the key drivers of industry growth and prosperity. Open technology standards enable profitable growth by allowing companies to share common specifications so everyone isn’t recreating the wheel every time. Standards are used to drive growth in every part of the tech industry from IoT to smartphones to the internet and to the datacenter. Today, a bevvy of tech industry giants announced a new server standard, called OpenCAPI, and includes support from Advanced Micro Devices, Dell EMC, Google, Hewlett Packard Enterprise, IBM, Mellanox Technologies, Micron Technology, NVIDIA and Xilinx. This is big, really big.

This announcement comes on the heels of the recently announced datacenter open standards CCIX and Gen-Z, just showing how much is at stake and in motion in the datacenter. I’m keeping this column short as I could easily write 10,000 words on every possible angle and tech detail, but I won’t here. I will publish follow-on columns from myself and the Moor Insights & Strategy analyst team.

OpenCAPI, a server accelerator standard for the most important workloads

OpenCAPI is a new standard to enable very high performance accelerators like FPGAs, graphics, network and storage accelerators that perform functions the datacenter server’s general purpose CPU isn’t optimized for. Acceleration is what all the cool kids are doing. The last thing Google CEO Sundar Pichai talked about at Google I/O was the TPU and the last thing Microsoft CEO Satya Nadella talked about at Ignite was FPGAs, all accelerators. Apple said in a recent article that they have the “biggest and baddest GPU farm cranking all the time”. Intel recently bought Altera for $16.7B and Nervana Systems for an estimated $350M.

Acceleration is what all the cool kids are doing

Accelerators are required to meet the new computing demands for artificial intelligence, machine learning, big data, analytics, security and high performance computing. Unless you are living under a rock, you’ll know these are all the hottest spots driving technology today. Accelerators need a very high-performance, low-latency, cache-coherent bus to connect to, and OpenCAPI was designed over many years to do just this. OpenCAPI has a very fast data transfer rate (at the PHY) at 25Mbit/second compared to PCIe 3 at 16Mbit/second. Cache-coherency means that the accelerator has equal access to main memory, which in traditional computing, is reserved for the general purpose CPU. PCIe is not cache-coherent.

If you are in the technology world, the word “CAPI” in OpenCAPI should sounds familiar as CAPI (Coherent Accelerator Processor Interface) is an accelerator standard invented by IBM and used across the OpenPower Consortium today. Many, many accelerators in the market support CAPI from companies like DRC, Alpha Data, BittWare, RedisLabs, Nallatech, Edico Genome and Semptian. IBM and its partners have done a great job building the CAPI ecosystem.

While CAPI was governed by IBM and metered across the OpenPOWER Consortium, OpenCAPI is completely open, governed by the OpenCAPI Consortium led by the companies I listed above. The OpenCAPI consortium says they plan to make the OpenCAPI specification fully available to the public at no charge before the end of the year. Mellanox Technologies, Micron, and Xilinx were CAPI supporters, OpenPOWER members, and are now part of OpenCAPI. NVIDIA and Google were part of OpenPOWER and are now OpenCAPI members. 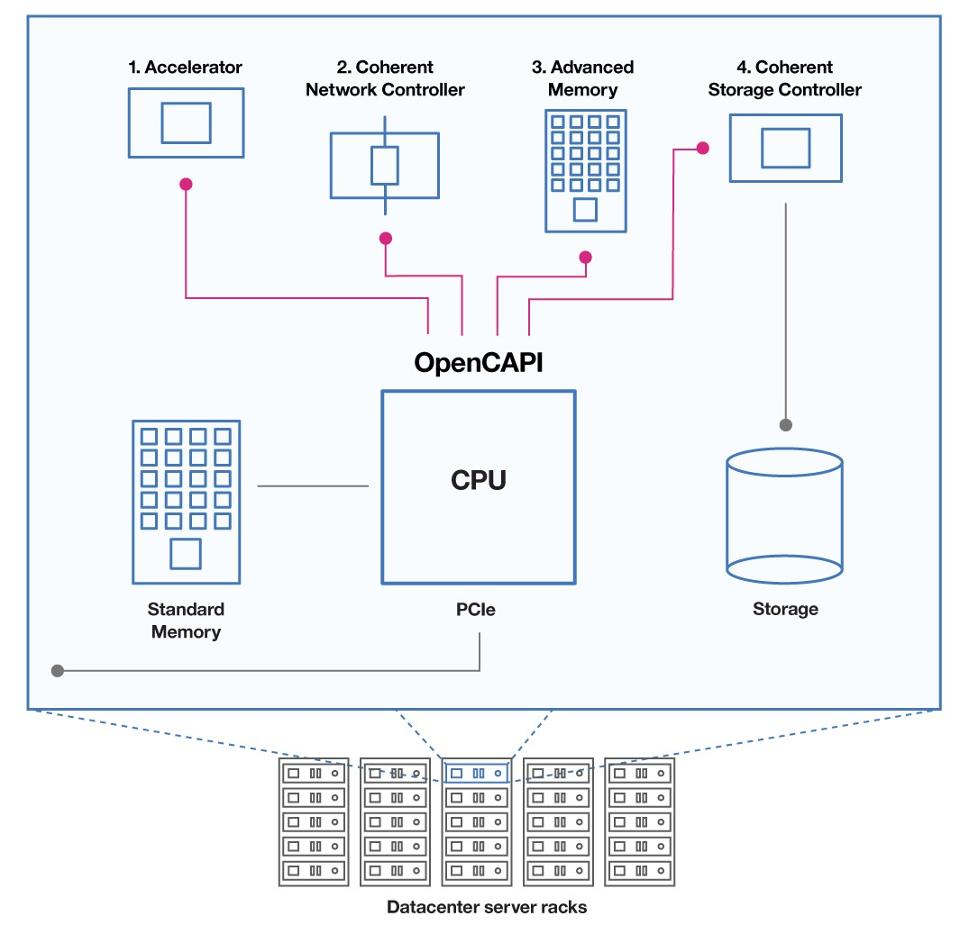 So what do CAPI-newcomers Advanced Micro Devices, Dell EMC, and Hewlett Packard Enterprise (HPE) bring to OpenCAPI? A lot. AMD brings their Radeon line of GPU accelerators and when paired with NVIDIA, you have 100% of the discrete GPU market. Dell EMC and HPE together are the largest server and storage vendors on the planet and when you add this to IBM’s server prowess with higher-end POWER8 and POWER9 it gets even bigger.

So does this mean Dell EMC and HPE will use OpenPOWER-based processors in the future? It’s possible but not probable. Both companies have their shared and unique reasons for being involved with OpenCAPI and I will drill down on this in a follow-up column. As system vendors, I know it’s very important to Dell EMC, HPE and IBM and their customers that competition and innovation is alive and well. And they will do what they need to do determine their own futures.

So what about Intel and why aren’t they part of OpenCAPI? Well, it’s complicated. I have not discussed OpenCAPI with Intel, but I am sure when the time I right, the company will discuss their new solutions for a high-speed, low-latency, coherent bus for accelerators. Intel supports acceleration as evidenced through the Altera and Nervana acquisitions as well as on-chip and on-package acceleration they already do in Xeons. Intel also has high-speed, low latency, coherent bus capabilities with QuickPath (QPI) and UltraPath Interconnect (UPI). Additionally, Intel today supports industry standards PCIe 3 with their server platforms, the bus which most all of the industry accelerators sit today. Given Intel commands 95% server unit market share, it’s important they participate in the future.

It’s one thing to support a standard and it’s another thing different to commit to products and dates for products on the day of the standards launch:

So where to from here? Well, compared to many industry standards groups, OpenCAPI is ahead of the curve on deliverables. It already has a spec, board, governance, tiering and products that should deliver in less than a year in 2H 2017. It’s crystal clear to me that OpenCAPI has been in development for many, many years. It’s really nice to see both Advanced Micro Devices and NVIDIA provide support but it sure would be nice if Intel participated in OpenCAPI given their weight in the datacenter. Future columns will dive into these areas more and also talk about how two other datacenter standards, CCIX and Gen-Z, fit into the standards scene.