Smart watches, fitness devices, and the consumer internet of  things (IoT) are all the rage these days.  Everyone is in on the consumer mobile IoT action including large companies like Sony (Smartwatch), Samsung (Gear),Qualcomm 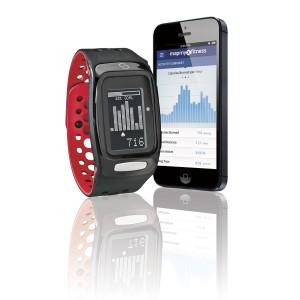 (Toq), Intel , Motorola (MotoActv) and smaller companies like Fitbit, Jawbone, and Pebble. I’m an avid Fitbit, Pebble and Polar user, have used Toq, MotoACTV, Pebble, and recently had the chance to use a fitness band called SYNC Burn that I’d like to tell you about, as I think it makes some nice trade-offs between features and price.  I think the best way to describe the watch is through “plusses” and “minuses”.

The consumer IoT market is exploding, and there are a dizzying array of smart watches and exercise bands and watches out on the market.  The consumer IoT market appears to be dividing into expensive, horizontally focused portable IoT devices and much less expensive vertical devices.  SYNC Burn is definitely a vertical fitness device and isn’t trying to be anything else, and does it quite well.  After having used the SYNC Burn fitness band for a few months, I have to say I liked it a lot.  I’ts distinctive in that it’s high quality, lasts a year on batteries, measures heart rate accurately without a chest band, waterproof and at $99 (Best Buy), it will be very hard to get anything better today.