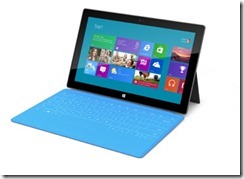 Yesterday, Microsoft announced Surface, a Microsoft-branded line of Windows tablets and convertibles. While details on battery life, pricing and availability were not available, Surface looks very impressive at first glance. The most unique feature is the thin keyboard case that converts the device into an extremely portable notebook. By competing with their own PC customers, Microsoft has changed the customer dynamic forever and will cause ripples all the way down the value chain.

Microsoft has a mixed history of making their own hardware products. On the plus side, we have the XBOX, mice and keyboards. XBOX is the dominant gaming and entertainment living room platform with one of the most innovative input devices, the gamer with Kinect. Microsoft has also had some big failures, too. The Kin phone was on the market a few months and the Zune was just recently discontinued. Both the Kin and Zune were nicely designed hardware, but both had certain fatal flaws, too. Kin consumer pricing blew it out of any reasonable price range for its target market. Zune forced users into a content acquisition model consumers just weren’t ready for and also faced intense competition from Apple’s iPod. While Surface details like pricing and availability were not available, assuming enough high-quality Windows Metro apps are available, the tablet looks very compelling… and that’s a problem for OEMs.

Since the days of DOS, Microsoft has never crossed the line and competed with its own PC customers in PCs, the HPs, Dells, Toshibas, and Lenovos of the world. When Microsoft got into Xbox, their customers did not want to get into that market. The only major friction point was discussion around Microsoft under-investing and deprioritizing PC gaming in lieu of Xbox game investments. When Microsoft launched Zune, PC OEMS did participate in the PMP market, but the Zune took the premium spot and left some differentiation room for its OEMs.

Before Surface, many OEMs I research were planning to launch Windows 8 and RT tablets. Some would be out for the October Windows launch, others would be out in Q1. Some tablets would be focused on the consumer market, others commercial and designs were in final prototype stages. Those designs could be in serious jeopardy now, but key details do not exist on Surface that would give better indication of an OEMs response. These are details like pricing, bundled software and services, target markets and distribution. Given Microsoft did not share details, one must now play out scenarios and do what-if games.

Microsoft could price Surface $100 above their OEMs. This would be a halo product strategy where Surface was the best of the best and aspirational, but wouldn’t sell that many. That is, unless it came pre-bundled with key services up front. This could be dangerous given consumer reaction to Zune’s all you can eat music plan. It would though “prime the pumps” like Ballmer indicated, paving the way for other OEMs to slot in. Microsoft could also narrow the target market, like going consumer only and not adding tools and features that would make it desirable to IT. This is an unlikely scenario given the Windows 8 and RT enterprise feature set and the popularization of BYOD. Surface will be in the enterprise on its own or get dragged in there by CIOs given the Microsoft brand and backing.

All the above scenarios are muddy and net-net only enable OEMs to participate in a low price leader position. This is similar to what the Android tablet manufacturers are experiencing today, which is ugly at best. A few companies are rising to the surface like Asus and Samsung, but still no one I talk to likes this market as no one is making any money in it and return rates and low levels of satisfaction run rampant. This is why OEMs were so excited by Windows 8. They saw how Android and in HPs case webOS turned out for them and came back to Microsoft.

With Surface, the dynamic between Microsoft and its customers changes…. forever. The announcement yesterday may be known as the day Microsoft delivered the iPad’s first real competition, but may also be known as the day Microsoft crossed the line with OEMs. Microsoft now is competing directly with its customers. Some OEMs will contemplate exiting the PC business entirely or exit the consumer market. Others will re-engage with Android. Some will run after Tizen, webOS or even plan to double down on their own OS like Samsung’s bada. Regardless, the PC market as we know it will be different from here on out. In some ways, that is a good thing, but long term could be a very dangerous game for Microsoft if the conclusion is that they have less customers for Windows.