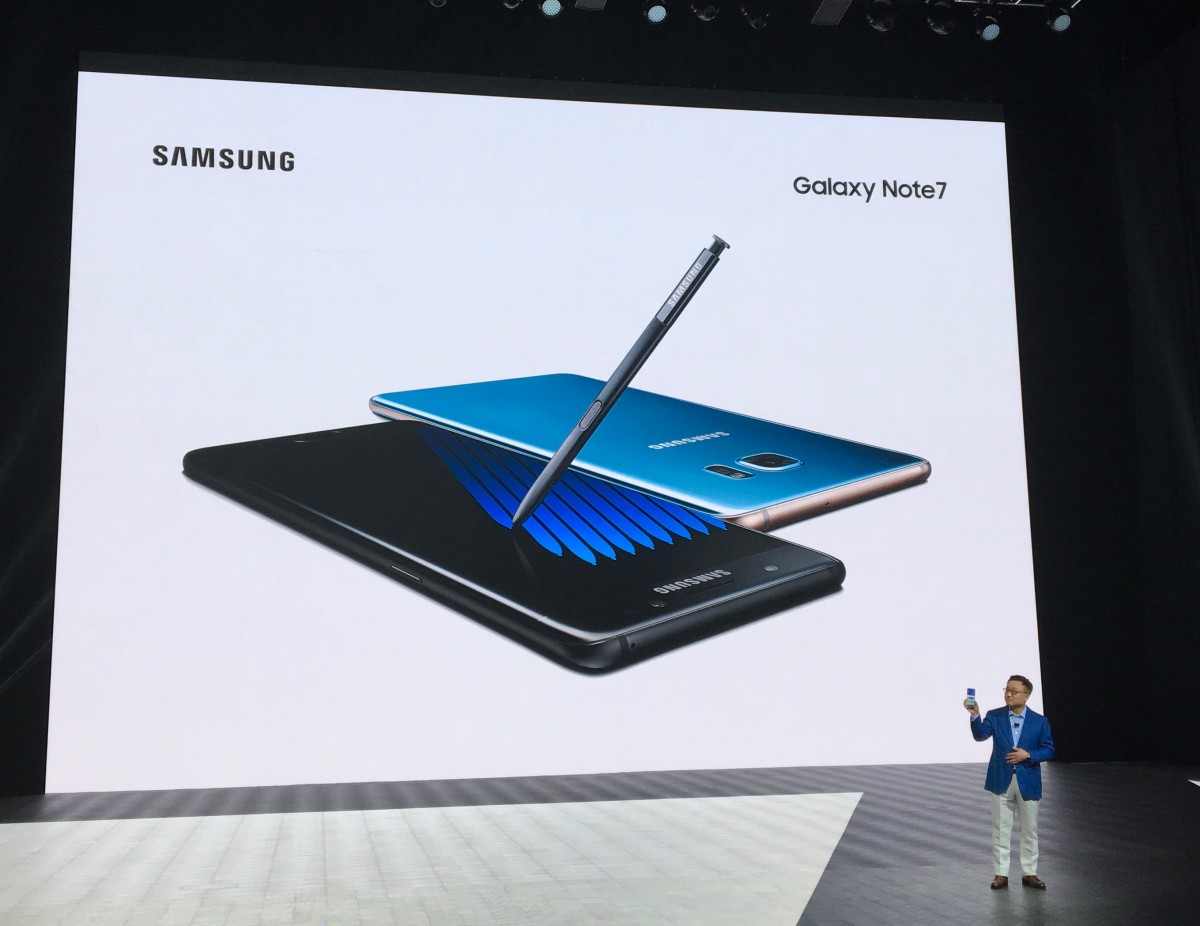 I attended the Samsung Galaxy Note7 launch in New York City a few weeks back and already wrote some of my thoughts about the Note7 from a consumer perspective, but there remains a lot more to be said about the device from an enterprise perspective. Samsung Electronics has invested a lot of time, effort, and money into making their devices, software and services more enterprise-worthy, and the Samsung Galaxy Note7 is the culmination of those efforts to date. Yes, it does have a beautiful 5.7” curved glass HDR, always-on display and a powerful new processor, but there are other features in the Note7 that make it a unique fit for the enterprise environment. And there’s more than just the physical device attributes and specifications and it extends to Samsung’s investments in security and infrastructure to enable easy-to-use and secure device experiences. It’s important to start strategically in the enterprise to put what Samsung did with the Note7 in context.

For the enterprise, Samsung Electronics is strategically focused on enabling IT to enforce security, management and purchasing policies while balancing a seamless, productive end user experience. As we have seen with BYOD, if IT can’t provide consumer-grade experiences, workers will just bring their own devices and all the security and manageability issues that come along for the ride. 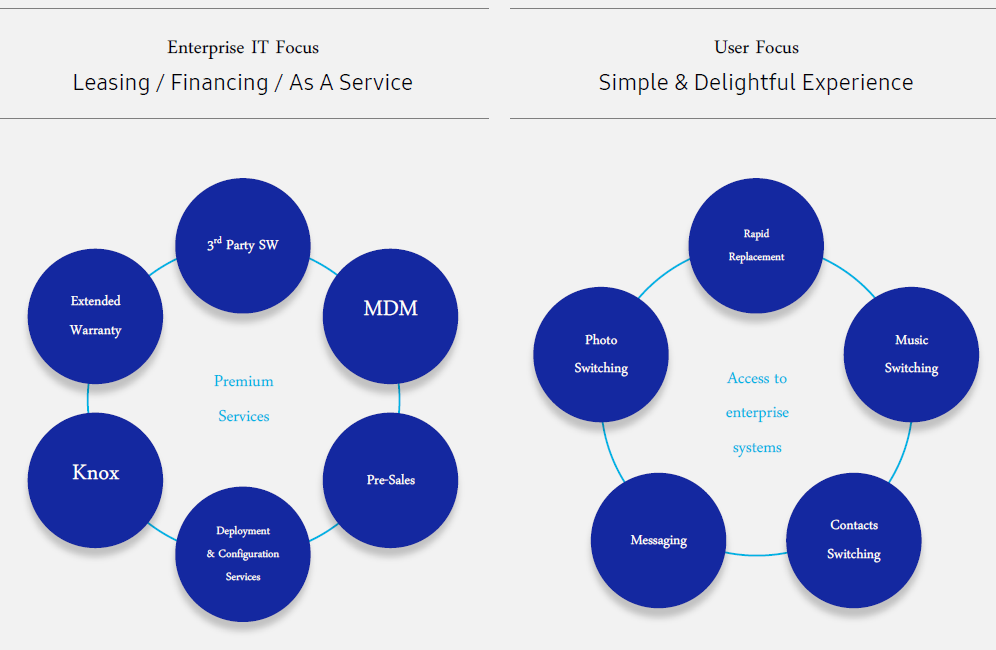 Samsung’s Knox is a cornerstone of the company’s security platform across all devices, including the Galaxy Note7 with what the company calls Knox “defense-grade mobile security” with approval for use with U.S. government classified data. Samsung also offers optional container solutions like Knox Workspace to help separate work and personal data to further protect sensitive data.

Samsung Knox has multiple layers of security starting with the Knox container going down to the secure environment for Android. Going beyond the secure environment for Android you reach the ARM Holdings TrustZone-based Integrity Measurement Architecture or TIMA which is the core of Samsung’s Knox platform. However, there are other layers to Samsung’s Knox platform including a trusted boot for the operating system and a hardware root of trust which establishes a separate hardware-based security processor to ensure the system does not get compromised by outside software. This architecture when combined with industry leading biometric security on the Galaxy Note 7 combine to deliver a good balance of user-friendliness and security. No one’s security system is infallible, but Knox is trusted by many businesses and governments across the globe.

The new Note7 also brings many other hardware features to the table that many of its competitors may have but not as a sum of all features. First and foremost, the Samsung Note7 has an extremely fast Qualcomm Snapdragon 820 processor which is a huge upgrade over the Exynos 7420 in the Note 5 translating to better performance and battery life. They also upgraded the storage capacity from 32GB to a standard 64GB which is unheard of from any smartphone manufacturer. Also included is an expandable memory slot for capacities up to 256GB which can be encrypted meaning that less sensitive data needs to be sent to the cloud. You could literally store everything that’s on your PC on your Note7. That’s awesome.

Adding to the across-the-board hardware improvements Samsung also beefed up the battery size to 3500 mAh from 3000 mAh and added USB Type-C fast charging as well as wireless charging which lets the business user work longer and in more places. USB-C is quickly become the corporate standard and the sooner users get this on their phones the better.

Did I mention that Samsung Electronics also made this new Note7 water resistant? That’s the first time Samsung has ever done that with any of their Note phones and means less devices get replaced due to water damage. Think of how many enterprise workers drop their phones in the toilet…. Or maybe not. 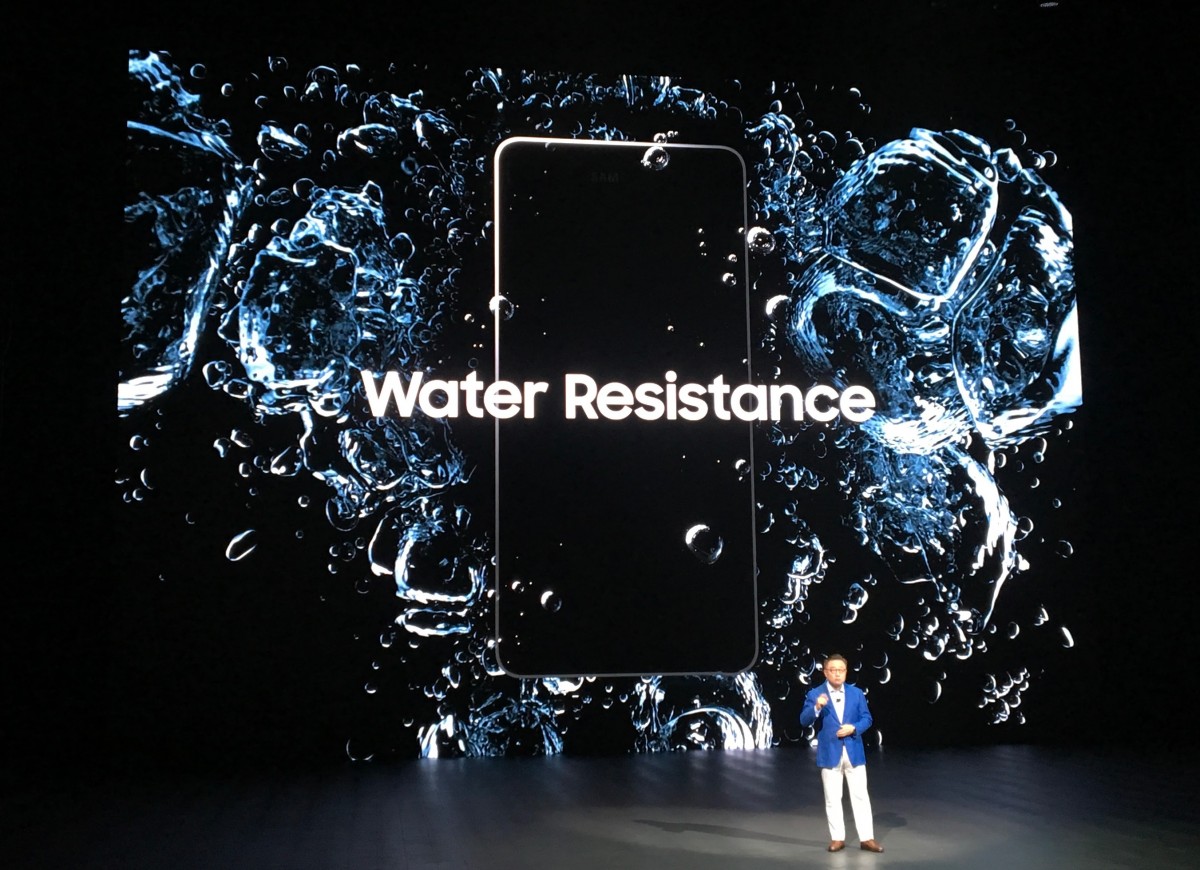 An important, new hardware feature of the Samsung Galaxy Note7 is the addition of a separate iris scanner to the front of the device. This is a scanner that is in addition to the front-facing camera for taking pictures and video, and operates independently of the camera sub-system. The purpose of the iris scanner is to add a second biometric method of authentication to make using the Note7 both easier and potentially more secure at the same time. With the existence of Samsung’s Knox security platform and its “government-certified enterprise-grade security”, companies and their users can feel better that the new iris scanner is being supported by a platform large governments and enterprises use. After all, your security is only as good as the security infrastructure around it. With the addition of the iris scanner, enterprises can now have users authenticate their devices with fingerprint scans like they normally would already and now with iris.

Secure Folder for the users

In addition to Knox Workspace for enterprise data and apps, Samsung introduced “Secure Folder”, an encrypted folder for user apps and data. The Secure Folder can be opened only by the user and can be done so by using iris scan, fingerprint scan, or password, further increasing security and protecting sensitive data. Between device login and access to Secure Folder or Workspace, the user has dual biometric authentication. I must note that both iris and fingerprint cannot be used to accomplish the same task at the same time. For instance, you cannot require both iris and fingerprint to login.

The Secure Folder is a great way for IT to reduce BYOD as the user now has a place they can put their personal apps and data inaccessible to IT. This was a missing element from vendors and what IT didn’t grock is that a personal folder actually helps reduce BYOD. I’m really excited about this one.

This new, multi-layered security approach from Samsung is sure to win over some security conscious enterprises that want to ensure that their data and their customers’ data is more protected. I have to add this disclaimer that no security system is infallible, all IT will eventually be compromised and enterprises should test their implementation with security researchers and testers.

To further make use of the new S Pen and always-on display, Samsung has also enabled a new feature called “screen off” memo. This feature enables a user to quickly jot down any notes to their device without needing to unlock the device. The user pulls out the pen and literally just starts writing on the screen that is still “off”, hence the name screen-off memos. This feature really allows the Samsung Galaxy Note7 to quite literally live up to its name. 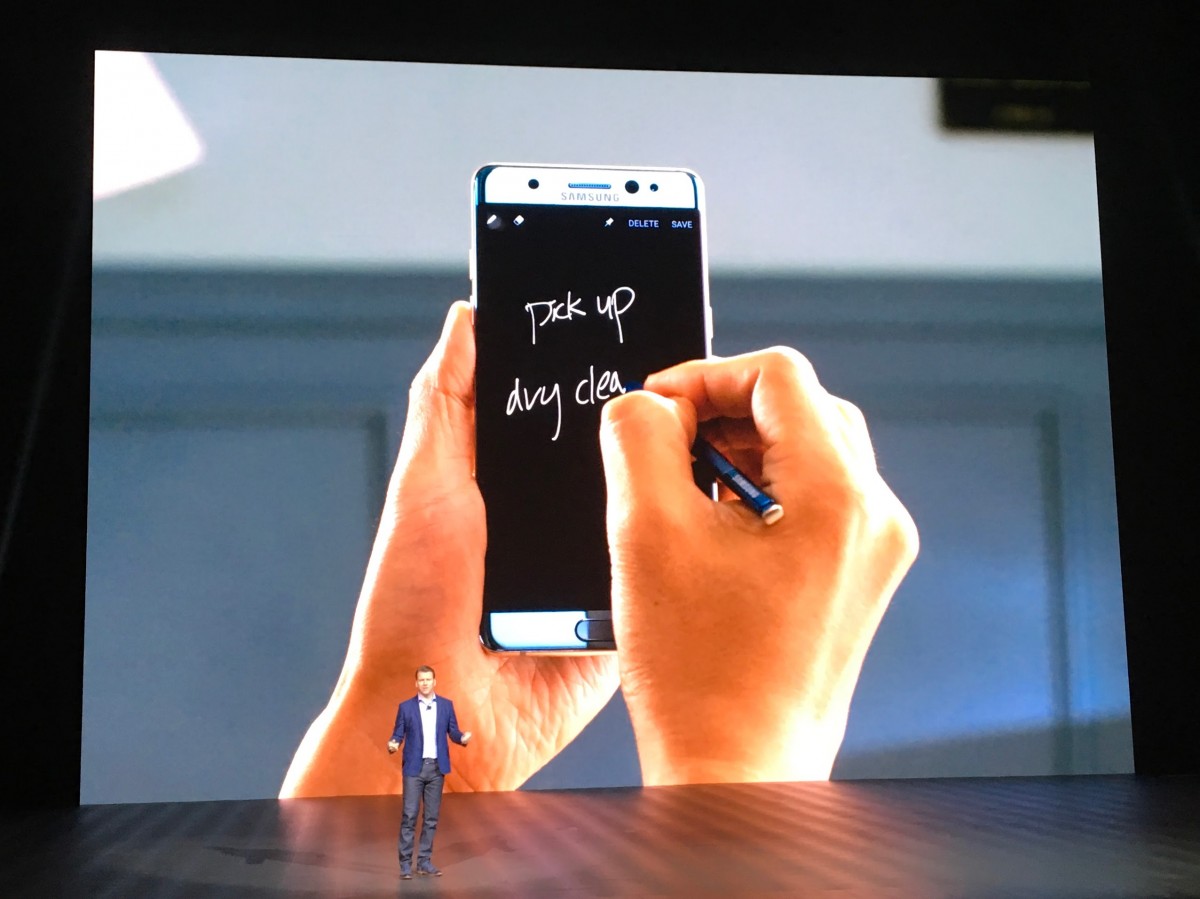 Samsung also consolidated the functions of what were previously four different note-taking applications into one application called Samsung Notes which both helps reduce device bloat as well as simplifies the user experience. I’m not a big pen note taker as I have typed my notes into Evernote and OneNote for years, but many have not, and I believe that Samsung may have removed that last objection to smartphone pen note taking. 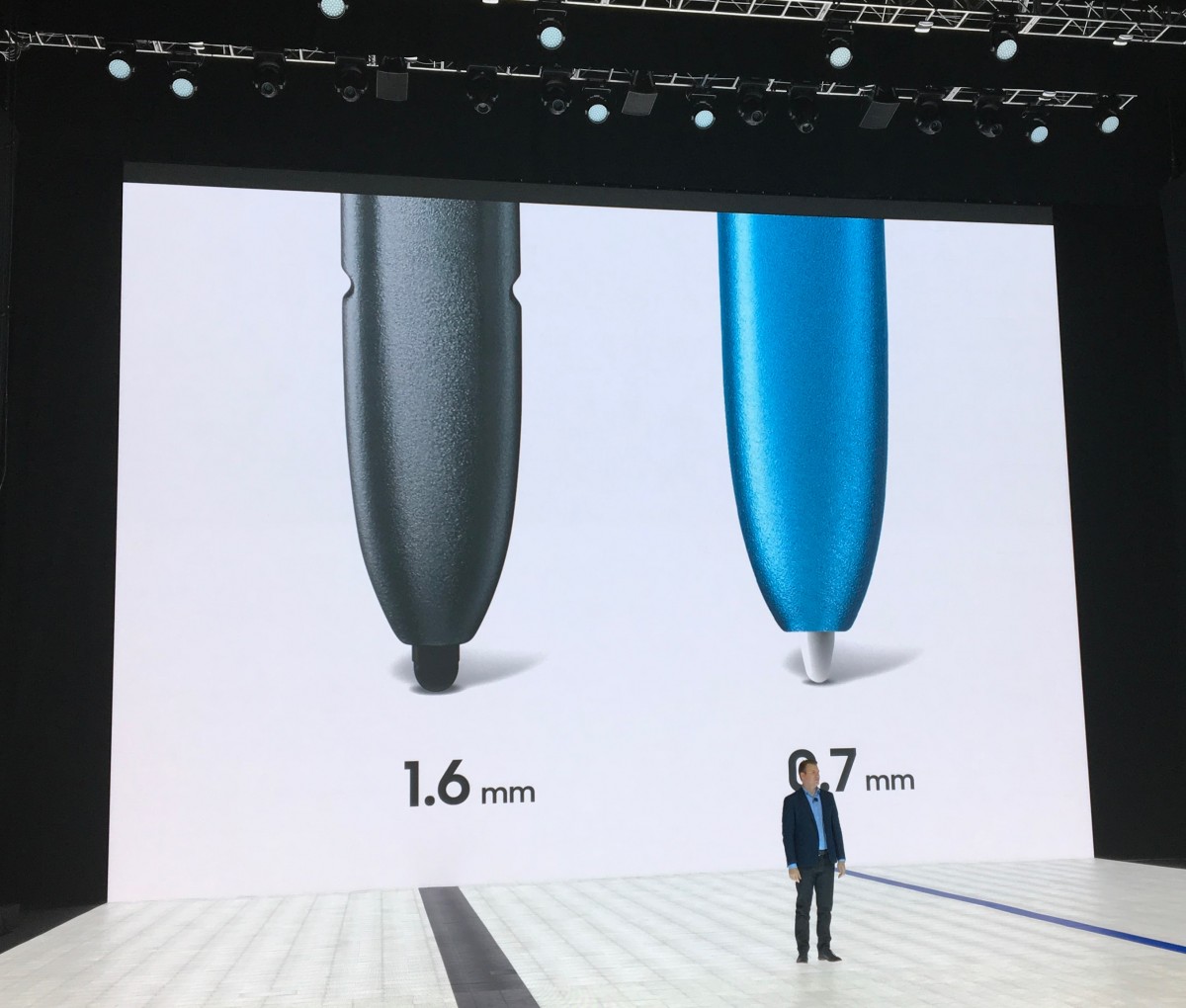 The Samsung Note7 may be the perfect smartphone for enterprise users with the fastest processor for Android phones, bigger battery, brighter screen, improved S Pen, water resistance and added layer of security with the iris scanner supported by Knox and a new Secure Folder for enterprise end users. There really isn’t much about the Samsung Note7 that there isn’t to like from an enterprise perspective. Sure, the new Type-C connector may be bothersome for some users at first as most of the enterprise is on Lightning or classic USB, but Samsung includes an adapter for classic USB and the future will be USB Type-C one way or another.

The Samsung Galaxy Note7 ticks all of the right check boxes and proves that the company listens to what their enterprise customers want. I’ve personally used the Note7 for around three weeks and will be following up with a hands-on.

The enterprise smartphone game just got a lot more interesting.

Disclaimer: No security system is infallible and all IT will eventually be compromised. Enterprises should test their implementation with security researchers and testers.