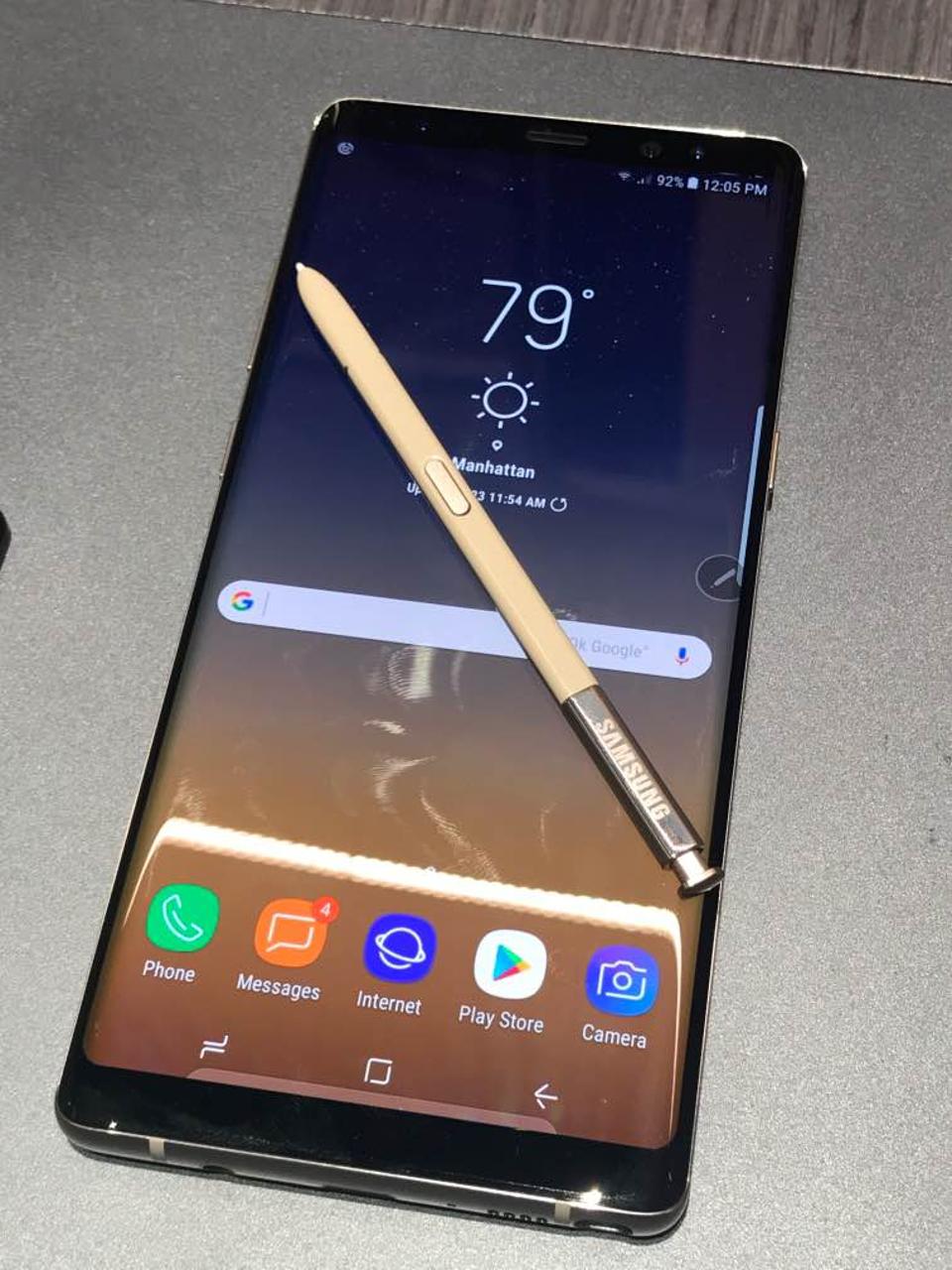 Samsung has long been the leader when it comes to enabling business users—ever since they released the original Note. Samsung’s history of continuously improving design, performance, and capability with the Note series has culminated in the Samsung Galaxy Note8. While there are many devices on the market that exist to compete with Samsung’s Galaxy S line of products, there aren’t many real competitors for the Note line. This new generation is no exception, with the company making additional tweaks to the Note8 to make it a tempting upgrade from the Galaxy S8+.

The Note8 takes what the company learned from the Note7 and Galaxy S8 and makes tweaks to improve it. The core pillars of Samsung’s Note line are screen size, productivity and S pen, and with the Note 8, these have been elevated to a new level. The new Note8 display is 6.3”, which is the biggest and highest resolution screen that Samsung has ever shipped, and with the Infinity Display, Samsung is doing it without making the phone all that much bigger. This new 6.3” display has a resolution of 2960×1440 which results in a pixel density of 521 PPI. This large display also allows for the ability to easily and smoothly do multi-window multitasking and is supported by improved multitasking capability. To accomplish this, Samsung bumped the performance of the Note8 by including 6GB of RAM in the Note8 (as opposed to 4GB in the S8 and Note7). The productivity capabilities are increased thanks to the S Pen, as well as the ability to take notes, live message, translate, screen write and Bixby Vision.

Samsung also knows that business users still care about the quality of their smartphone camera. The company leaned on its expert camera team to build its first dual camera for the Galaxy line into the Galaxy Note8. The dual camera in the Note8 features a bokeh feature that can either be done live or in a post, which allows for a better user experience. The dual camera is also capable of dual capture, meaning that the wide-angle camera and telephoto camera can capture simultaneously, allowing for users to pick the better version of the same photo. Both the wide-angle and telephoto cameras have OIS, which is important for capturing sharper images taken in low-light quality, and a smooth transition of experience between cameras when zooming. The wide-angle camera is 12MP with dual pixel capability and an aperture of f/1.7, while the telephoto is a 12MP with an aperture of f/2.4—there is still some noticeable difference in low light performance.

The Note8 is still fundamentally a business-focused device, so it comes as no surprise that they’ve added the ability to discretely take notes on the Note8 with Screen Off Memo. The Note8 also has Iris authentication, which originally premiered in the Note family, and has been perfected in the Note8. This capability allows for authentication without needing to touch the screen or a fingerprint sensor. Samsung has also enhanced the DeX capabilities in the Note8, making it even more enterprise friendly—for example, the update to Knox 2.9. Knox is the foundation of Samsung’s enterprise and business capabilities, ensuring robust and trusted security and manageability. The new Knox 2.9 has strengthened security, improved user experience, and ensured smoother deployment with Knox Configure and in-depth controls for IT administrators. The Note8 will also ship with Google ’s Android 7.1.1 operating system—not quite the latest Android 8.0, but I’m sure it will likely get updated soon.

When it comes to connectivity, Samsung is keeping things at the highest level of performance—I was glad to see it has support for Gigabit LTE, depending on the market and carrier availability. This Cat. 16 LTE modem (paired with the MU-MIMO Wi-Fi capability and Bluetooth 5 support) puts the Note8 in a small exclusive group of devices: those that can boast the fastest of all flavors of wireless connectivity. Connectivity is crucial to businessusers; without a reliable and fast connection, emails and applications don’t get downloaded and calls can get dropped. Business users really are among the toughest users to satisfy when it comes to smartphones, and their usage is among the highest.

The Samsung Galaxy Note 8 will be available in two colors: Midnight Black and Orchid Gray. In the US, the Note8 will be available on AT&T , C Spire, Cricket, Sprint, Straight Talk, T-Mobile , US Cellular, Verizon Wireless and Xfinity Mobile. Pre-orders begin on August 24th, and the device will be in stores beginning September 15th. An added bonus—those who pre-order between August 24th and September 24th can either get a free Gear 360 camera, or a free Galaxy Foundation kit with a 128GB EVO+ microSD card and Fast Wireless Charging Convertible. As always, Samsung is trying to sweeten the deal with its latest and greatest device—while it isn’t including a GearVR headset this time, the choice between a free camera or memory card and charger is great for business users. For the record though, the Note8 will be compatible with the new Gear VR with Controller (available September 15th for $129).

Business users have been waiting a long time for a device with a stylus, and I believe that Samsung’s new Note8 is going to set the new standard. It is great to see Samsung continuing to innovate, and breathe new life into the Note family. In my opinion, the Note8 is overall going to be the new standard for a flagship phone, and it gives enterprise and commercial users another quality choice. There will be more devices launching this fall, but it’ll be hard for them to match the design, productivity and security capabilities of the Note8. I can’t wait to get one of these in my hands to test drive it as a business user and kick the tires myself.