Tablets are a tough market. Unless you are Apple, Samsung, Amazon, Lenovo, or ASUS, the tablet market hasn’t been 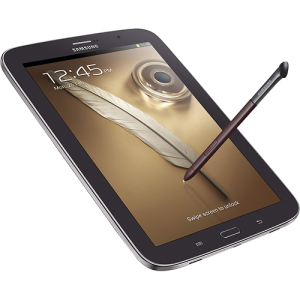 very kind to you. Just because you do well in smartphones or personal computers doesn’t guarantee you will do well in tablets, either. Tablet makers will do everything to differentiate their tablets. Amazon subsidizes their cheap tablets with a proprietary app and media store and also has direct video chat with a “helper” called “Mayday”. Apple had first mover tablet advantage and now differentiates on experience, quality, the biggest tablet app store, and brand. Samsung has adopted the “spray and pray” approach that actually works well for huge, 800 pound gorilla companies. Whatever the input method, screen size, or price, Samsung will have something to offer you. One of Samsung’s biggest methods of differentiation is on input method, featured in the Samsung Galaxy Note product line using the S-Pen.

The Samsung Galaxy Note line of tablets use a pen, the “S-Pen”, to control the tablet, but also to draw with, take notes and annotate. I had the chance to use the Samsung Galaxy Note 8 for a month and I wanted to share information that should help you decide whether you buy one or not. This isn’t a comprehensive review. You can find those all over the web. This is is a list of important things based on my nearly 25 years strategizing, analyzing, planning, developing, launching and managing 100′s of products in my career.

Here are some things I think you need to know:

NOTE: While most of my product evaluations go directly to my analyst client base, I will do some evaluations publicly for a broader audience like Forbes.  These public evaluations are for high-volume, well-distributed or unique products.