Every year hundreds of thousands of mobile experts and mobile enthusiasts converge upon Barcelona for the annual Mobile World Congress. I attended this year’s Mobile World Congress 2016 (MWC 2016) in Barcelona and expected there to be a huge trend towards VR which Moor Insights & Strategy VR head Anshel Sag has covered extensively. This year’s Mobile World Congress as well as CES only a little over a month ago were both very heavily focused on VR playback. As a result of this, content has become one of the most desirable areas for VR in order to feed the demand for VR content created by all of these new VR headsets. For MWC 2016 mobile VR capture suddenly became a big thing for all of the major OEMs. At this year’s show I got an extensive opportunity to play with Samsung Electronics’ new Gear 360 VR camera as well as their new Samsung Galaxy S7 smartphone. Both of them seemed surprisingly easy to use and extremely fast. 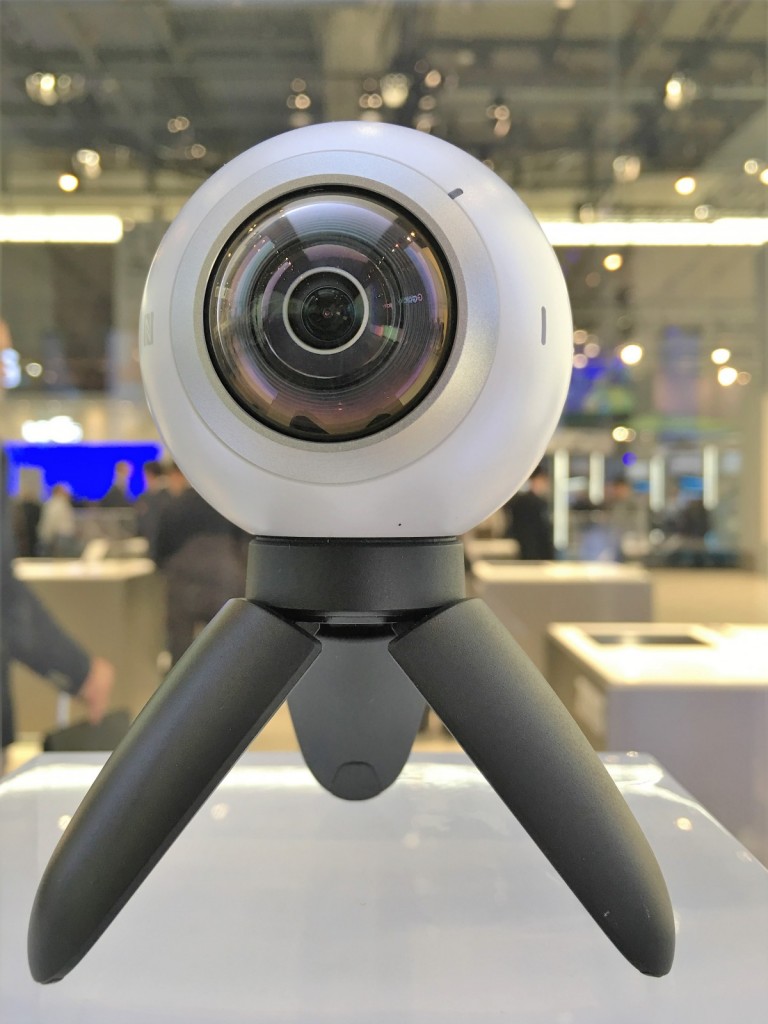 For success, VR playback and content must be robust

The world of VR is split into two different areas, tethered PC VR and mobile VR. The reason why so many companies are going after mobile VR is because that’s where all of the volume is expected to be in VR. As a result, you have companies like Samsung Electronics and LG Electronics introducing products for mobile VR as well as companies like Apple and Google hiring lots of staff to build their own VR solutions.

However, even with all of the hardware in the universe, nobody will buy any of it if there isn’t enough compelling content. Without good content that gets consumers excited, there’s no future for VR. However, in order for VR content to be successful there also needs to be a reasonably big install base to support the development of that content. This is where mobile VR has the best chance because it has the biggest opportunity to grow quickly enough into a seriously addressable market. Heck, even Google’s own Google Cardboard has now shipped over 5 million cardboards globally and that is literally a piece of cardboard you put your phone in.

The Gear 360 VR is Samsung’s own solution to the VR content problem, it is a 360-degree VR camera that you can control wirelessly. It has two wide angle cameras that are computationally stitched together and then remove key-stoning in order to give a natural 360 appearance. It has a removable battery and microSD storage. It also has the ability to stream directly to the Gear VR headset or the Galaxy S7 for control purposes. Samsung has created this camera as an integrated solution that allows for both the creation and consumption of VR content on their phones with the Gear VR headset.

In order to use it you have to open the Samsung Galaxy S7 application, choose to take a photo or video and then preview it on the phone. This preview is streamed directly over Wi-Fi and all you have to do is hit record and it will record locally onto the camera. It also allows you to import it wirelessly through the application onto the phone. 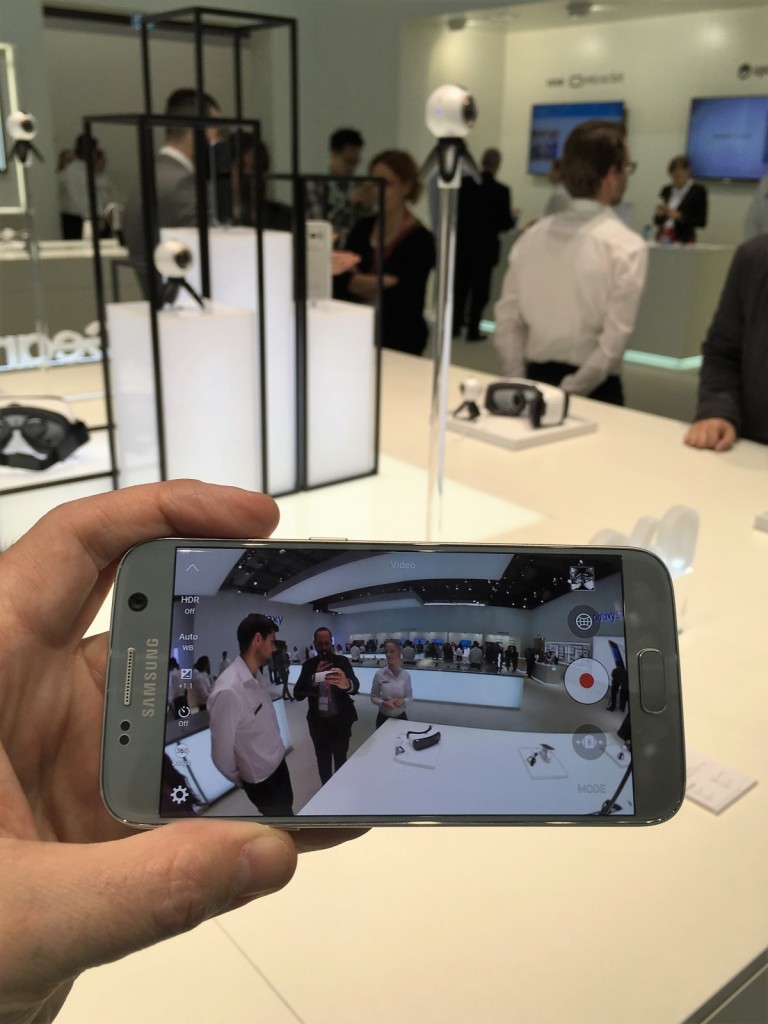 It stitches the video together in what seems like real-time and creates a pretty seamless solution for a mobile experience. Alternatively, if you aren’t desperately in need of having content immediately on the go, you can always move the content over to the PC via SD card and edit it there. What makes this camera great is that you can watch the content on your Gear VR, your phone or even your PC, the choice is yours. It wasn’t necessarily the highest quality video I’ve seen before, but the novelty of it distracted me from concerns or thoughts of quality. 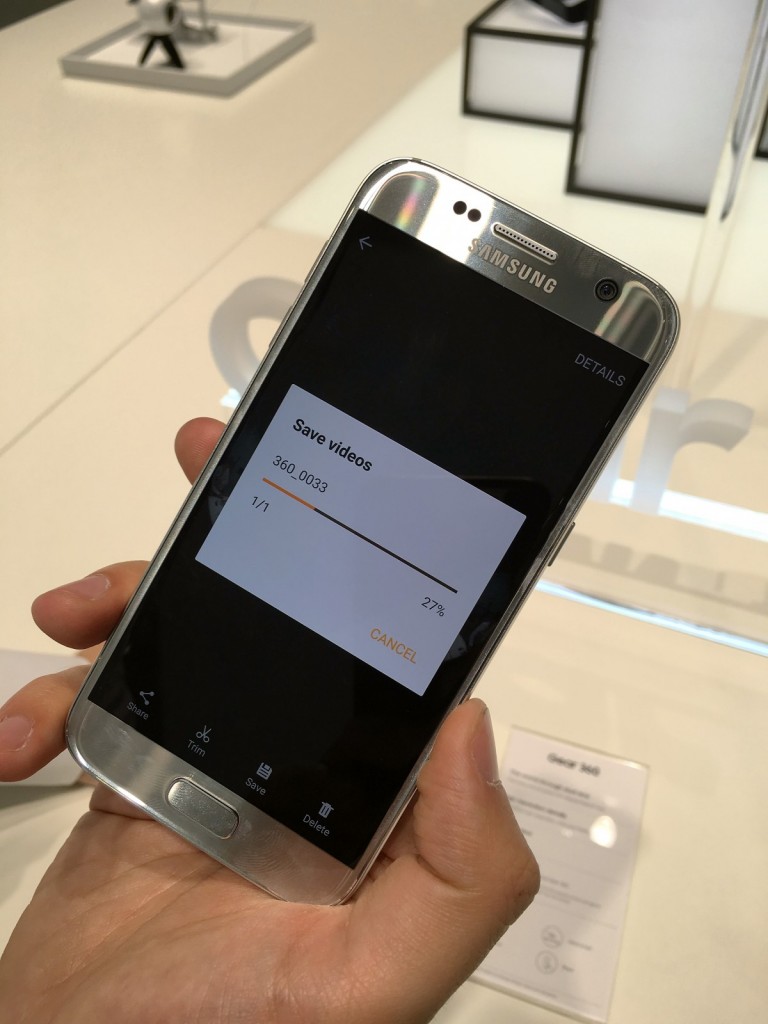 Having this camera in normal daily situations could actually prove pretty useful for a lot of applications, which is probably what Samsung Electronics is banking on. It could be used for weddings, birthday parties, graduations, actual births, you can now record the entire reaction of everyone in the room rather than having to focus on just one person. It can also be used for educational purposes like hands on activities where seeing the surroundings is extremely valuable like geography and nature. It could also be used by real estate agents to show what a property looks like to remote buyers or simply for previewing purposes. It can also be useful in sporting events and outdoor activities where there is always more going on than meets the eye at first glance. 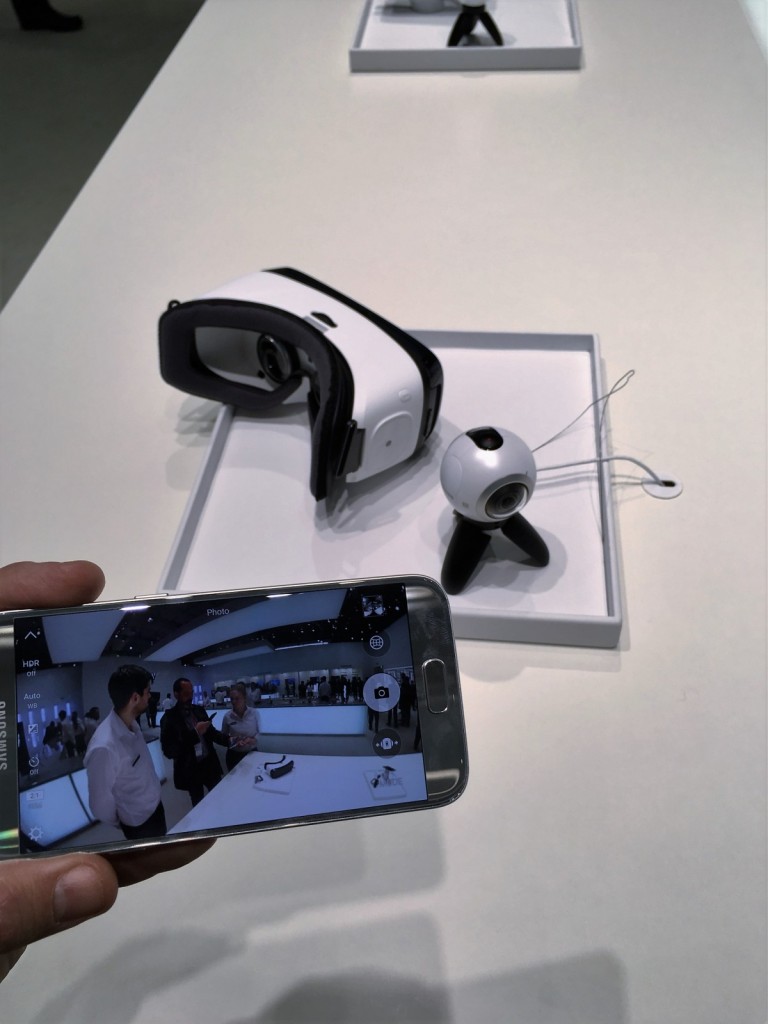 I am sure there will be plenty of peripherals and wearable applications for these 360-degree VR cameras and the great thing about tech is that someone will eventually invent something really cool for this class of camera.

Even though this camera is really fun and easy to use, consuming its content could still prove problematic for some. The Gear VR still has a chance of making you sick. This is due to the fact that they haven’t added strobing to the HMD or the phone to compensate for lag. As a result, there are still some situations where a user could find themselves getting sick if the content is too intense.

HMD maker IonVR has done a lot of work on their headset to reduce sickness and increase the satisfaction of the experience.

VR is the hot new thing and everyone is jumping aboard, some companies have already jumped on-board and others are just getting on. Samsung Electronics has already been committed to VR with their Gear VR, but they are furthering their commitment to VR by creating a 360 VR camera, the Gear 360 VR. This is because even though we have VR headsets, there still isn’t enough content out there to make it a compelling experience for many. The Samsung Electronics Gear 360 VR camera could help solve that content problem by helping users to easily create 360-degree VR content and consume it and share it.

There are other 360-degree VR cameras out there already and others in development, but Samsung’s commitment shows that they are committed to helping move VR forward. This includes pricing it according to what the market is willing to absorb, which means it needs to be $199 or less in order to drive serious volume. My personal experience was that it was better than I expected, but there are still some issues on the mobile HMD side for Samsung Electronics that could still cause nausea. I haven’t used the Gear 360 VR for any extended periods of time, but the short amount of time that I did get at MWC 2016 was a mostly positive experience.