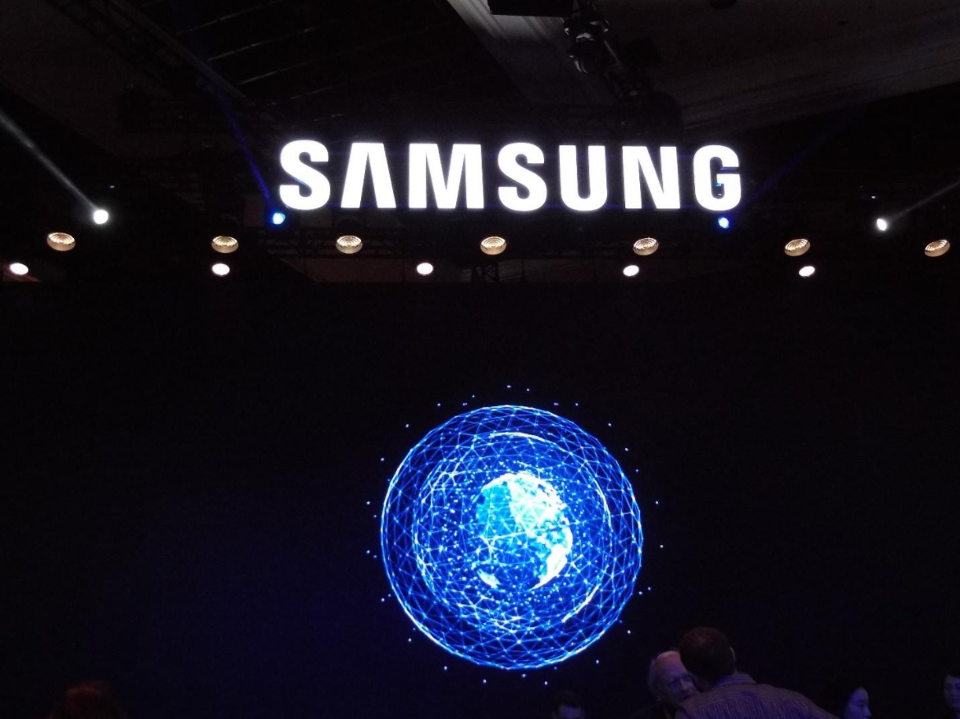 Last week, I and several other members of the Moor Insights & Strategy team attended CES 2018 in Las Vegas. One of the companies I was most looking forward to hearing from was Samsung, particularly in the realm of IoT and the smart home sector. Samsung is the 800lb gorilla and owns consumer electronics and typically, the industry follows their lead. The company’s keynote last Monday did not disappoint, and there were plenty of new announcements to chew on. Here’s my recap of Samsung’s CES 2018 address, the big news stories that came out of it, and a few of my opinions on it.

Tim Baxter, President and CEO of Samsung Electronics North America, kicked off the address by reminding the audience that Samsung leads global market share in smartphones, TVs, and wait for it—refrigerators. Baxter touted the $14 Billion Samsung spent on R&D this past year to develop the latest technologies, and the new technologies and subsidiaries it has brought under the Samsung fold—Samsung Pay, SmartThings, Harman, and Dacor, to name a few. Baxter reiterated Samsung’s previous promise that all Samsung devices would be IoT-enabled by 2020, claiming that already 90% of the company’s TVs, appliances, smartphones and tablets were already there. That 2020 date is huge and I think now we can say that voice UI is close to going mainstream. This doesn’t mean perfect, but certainly, it will be on more devices than not in 2020. 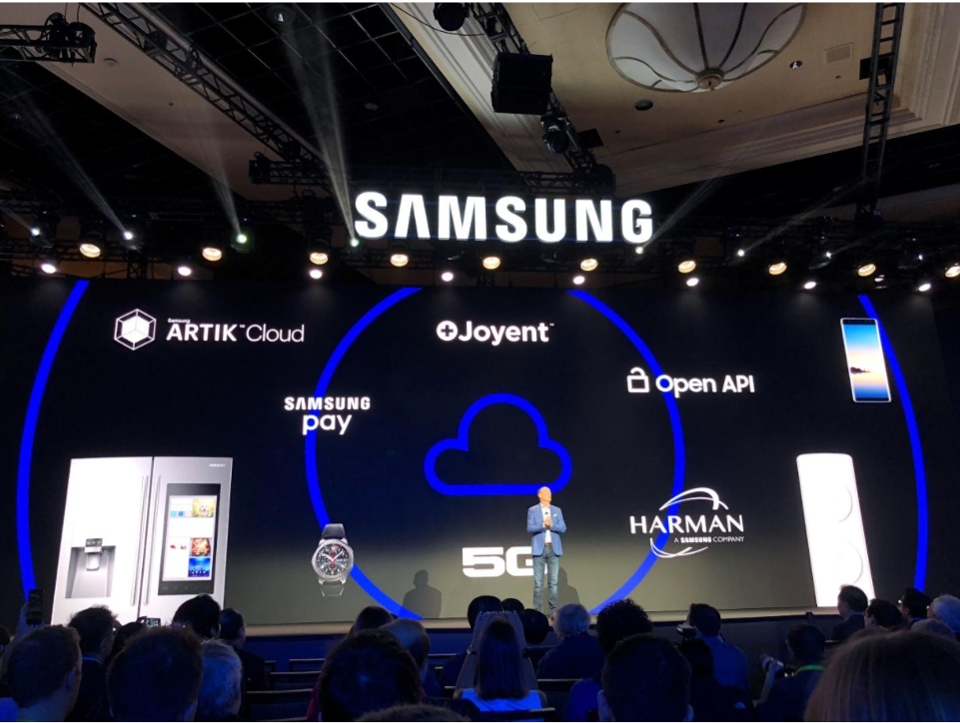 Baxter went on to make the first big announcement of the day—that Samsung Knox technology would be coming to more all of Samsung’s consumer tech products, including Tizen-based TVs, signage, and Family Hub. This is a great move in my mind—security is the biggest risk when it comes to IoT, and it’s good to see Samsung taking it seriously.  This is a big deal because of the risk that unprotected IoT devices have. If you recall, botnet Mirai was created on the backs of unprotected IoT devices. With Spectre and Meltdown, we could also have a 500M unit army of Android smartphone bots to do global damage.

Next, Baxter introduced HS Kim, Head of Samsung’s Consumer Electronics Division and Samsung Research, to talk at greater length about Samsung’s vision for IoT. Samsung’s strategy has three major components: seamless connectivity between devices (with open innovation), having a single cloud to manage all these devices, and lastly—the devices must be intelligent. Kim announced that this spring Samsung would be uniting all of its IoT applications—Samsung Connect, Smart Home, Smart View, and others—into a single SmartThings app, which Samsung says will allow consumers to directly access and control any of their SmartThings-enabled devices from their phones, TV, or car. To get the industry where it needs to be for home IoT growth, first, the walled gardens will build out their interconnectedness followed by the walled gardens some day talking to each other. We’re not where we need to be but headed in the right direction.

Samsung also announced Bixby, available on Galaxy 8 series phones today, will be made available on TVs and the Family Hub. Samsung telegraphed this at their developer conference and it’s nice to see it as official. We can now see more proof of Samsung making their products interconnected and more intelligent so they work better together as a system with consistent voice controls.

Speaking of cars—Samsung also announced at CES that would be connecting HARMAN Ignite to the SmartThings Cloud. In my opinion, the work Samsung is doing with the Harman self-driving and dashboard experience is one of the company’s most overlooked projects—Harman is in almost every car built today. 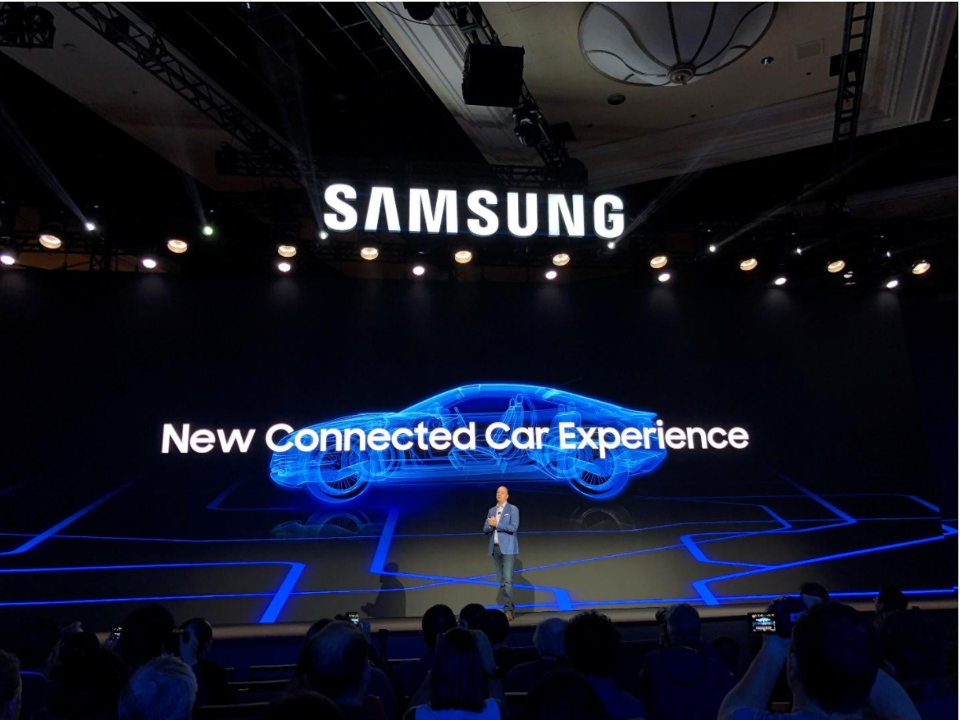 Kim went on to discuss AI and Bixby. Samsung is working to incorporate its Bixby intelligence service into more and more of its devices, with Bixby voice control coming to its Smart TVs and Family Hub refrigerators this year. Kim made the pledge that not only would all Samsung devices be IoT-enabled by 2020, but would also be “intelligent”. Samsung is burning the bridges and going all in on Bixby—we’ll see how it pays off in the coming years. Bixby has a long way to go and as long as I see continued improvements, the number of “seats” won’t be an issue.

Next, Joe Stinziano (Executive VP of Samsung Electronics America) took the stage to talk more about Samsung’s new 2018 Smart TVs. They will be Bixby-voice enabled, and will include the new SmartThings app—the largest screen in your home can now act as the dashboard for your entire IoT ecosystem. Since you’re connected to the rest of your smart home, you can ask it to “dim the lights” when you’re ready to start watching something—pretty neat. On a similar note, the 2018 Family Hub refrigerators will also be connected to the SmartThings app and will boast several new features, such as the ability to recognize individual family member’s voices and deliver personalized info such as news and calendar items. 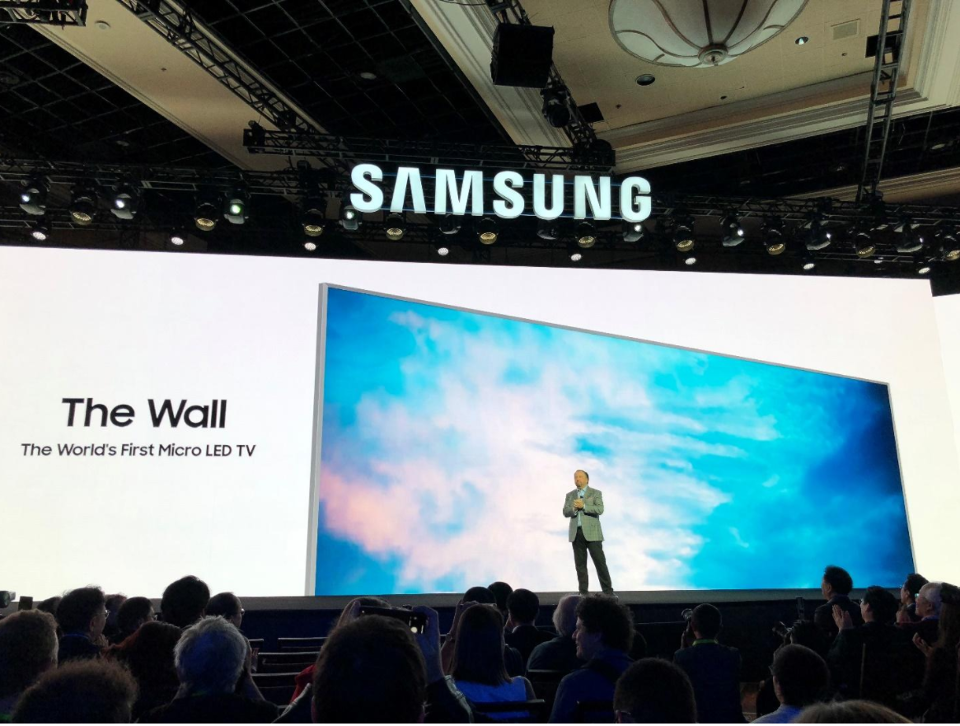 Alanna Cotton, VP of Samsung Electronics America, took the stage next to talk devices. After recapping the previous year’s new products, she introduced the new Notebook 9 Pen. The new 2-in-1 PC is extremely light (at 2.2 lbs.) and portable, and Samsung is marketing it as a notebook that meets all the needs of the “modern, mobile workforce.” From what I’ve seen it looks like a great product, but I will say that if Samsung is going to drive serious volume with it, it’s going to need to radically change its distribution and marketing schemes. 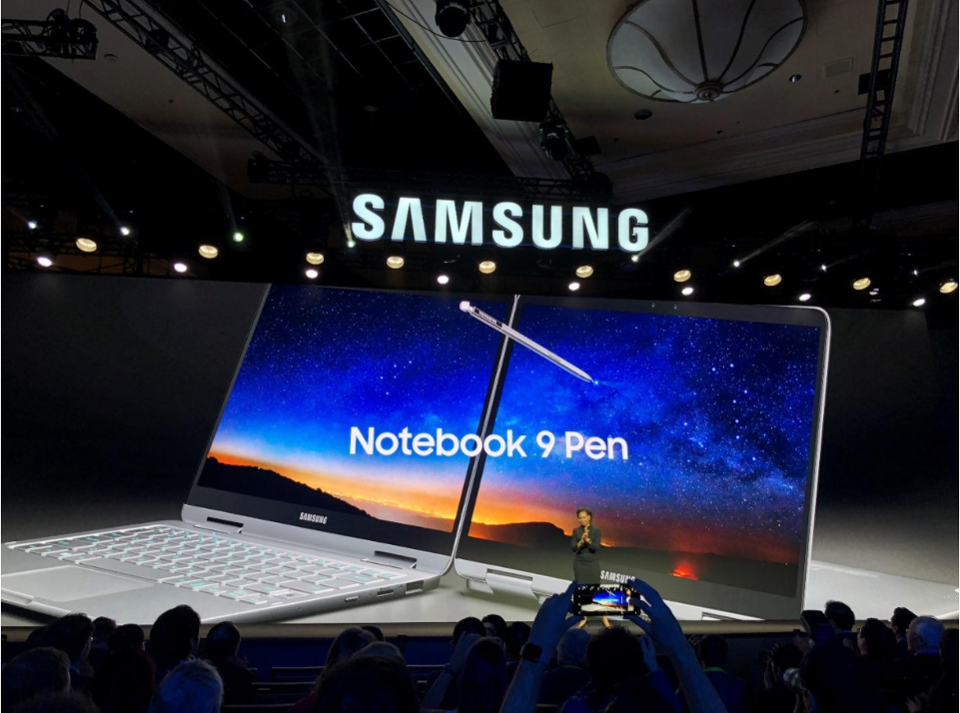 Cotton went on to introduce the Samsung Flip, a 55-inch “digital flip chart,” which Samsung says will simplify and redefine office collaboration. Group members are able to connect to Flip via their smartphones or laptops, and as many as four people can share/markup content on the screen at the same time (using either the fingers or an embedded pen). Flip reminds me more of Cisco Spark Board and Google Jamboard than Microsoft Surface Hub and Skype—it looks built to collaborate on images, not documents. I need to do more research on Flip before I say any more. 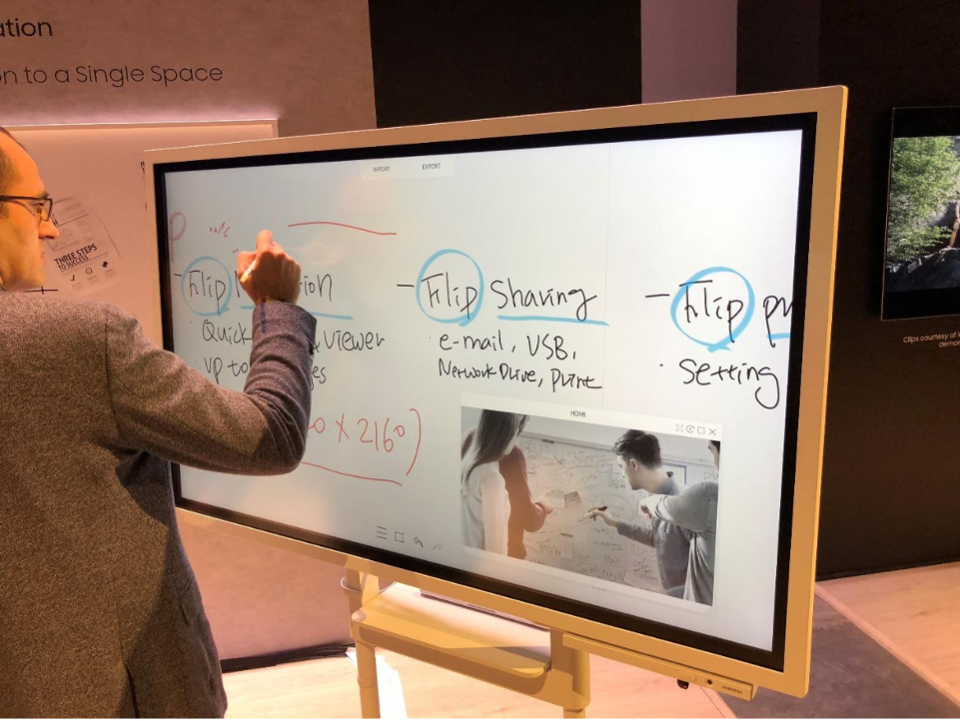 At this point, Tim Baxter returned to the stage round out the address. He concluded things with a segment on Samsung’s work towards 5G enablement, and what the technology could mean for the future of autonomous vehicles and more. Baxter touted Samsung’s role in bringing about 3G and 4G technologies, stating that it is “only natural” that the company is taking the lead in 5G. He cited Samsung’s partnering with wireless carriers and broadband providers to conduct some of the first customer 5G trials around the world, as well as Samsung’s recent announcement that Verizon has selected Samsung for the launch of its first 5G commercial service in Sacramento, CA.

I see Samsung Electronics as the 5G “dark horse” to both Qualcomm, Intel, Huawei, and Ericsson. The most interesting thing is that Samsung creates technology that spans the 5G tower to the device to the silicon. The company has traditionally had big success in Korea as you might imagine and are making progress with Verizon in the U.S. with fixed 5G. Fixed 5G replaces the need to lay fiber from the pole to the home.

All in all, I thought it was an informative and engaging address, with just the right mix of big-picture items and new product announcements. The biggest thing that struck me was that Samsung finally made the shift from home “products” to “solutions”. It wasn’t as evident at the keynote but it was on the show floor. The CES floor experience was less focused on products and more focused on benefits.

The Wall was the runaway hit of the show for sure. The new Notebook 9 Pen looks like a solid offering, as does Flip, Samsung’s new workplace collaboration tool. I came away from the afternoon with a better understanding of Samsung’s IoT agenda, and it looks like the company is making good inroads on its stated goal to have all of its devices IoT-enabled and intelligent by 2020. I expect we’ll continue to see more and more of Samsung’s products infused with Bixby and integrated into the new, unified SmartThings app. That’s all for now—I will continue to monitor with interest and look forward to the march to MWC.