Over the course of the Windows 8/RT industry discussions, ARM-based tablets have received the lion’s share of the discussion.  This has been particularly true with Microsoft’s announcement of Surface RT.  Does this mean 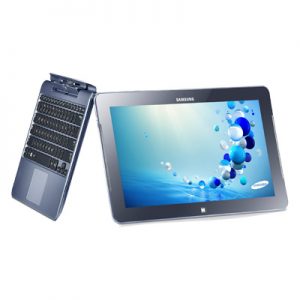 First, just in case you were living under a rock for the past two years, two Windows operating systems exist, Windows RT and Windows 8.  Both run the newer Metro tile-based apps. Windows 8 devices will run those apps and all previous Windows 7 desktop applications and Windows RT devices come pre-loaded with Microsoft Office.

One of the major weaknesses of Windows RT devices is that they currently have no way to sync files so they are accessible offline.  With the Samsung 500T, I can install Sugarsync, Box, Dropbox or SkyDrive and have a folder of files that is accessible and synced, online and off.  This isn’t some corner case usage model for me as I have working like this for years and for me is a requirement for a “PC”.  I can even sync files with my iPad, so it’s not like this is foreign to tablets or even phones.  I do expect Microsoft to eventually add this capability but it’s just not here now which was very dissapointing.  They will need to write an ARM-based, desktop compatible connector to achieve this.

Windows RT devices come standard with key Office apps like Word, PowerPoint, Excel and OneNote, but it doesn’t come with Outlook.  With my Surface, I bounce back and forth between Metro-based Mail and Desktop Office, which is a bit of a shocker when in work-mode.  On the Samsung 500T, I can take advantage of Office’s features I us a lot like rich email salutations, filters, social media connectors, Word-like formatting, mail-merge, and reply with meeting.  I have to admit, I was surprised how responsive Outlook was with CloverTrail.  Intel really did their homework on the Atom Z2760 and Outlook.  I must point out that Outlook is an adder, a $199 adder, so this isn’t free, but a requirement for me when doing heavy duty work.  The Metro email app is good, but not good enough to run my business from.

The Windows App Store does not currently have many games, but I am optimistic given the amount of Windows game developers out there.  One of the advantages of the Samsung 500T is that it can run legacy apps and games.  It’s not like you would want to run the latest Call of Duty game, but certainly you can run some of the lighter weight desktop games.  For instance, my son, as I have written many times before, plays a game called Wizard101 from KingsIsle Entertainment.  He literally plays this every day, and because Intel’s CloverTrail will run Windows desktop apps, he can play his favorite game.

It’s hard to buy a printer without an integrated scanner, fax and copy machine built in.  I had no problem network printing from Surface, but I couldn’t install any of the advanced features that made the scanner work.  The Samsung 500T loaded the entire driver and app set and I could use all of the features.  The one I appreciate most is where I scan a document and it automatically shows up in the “My Documents” folder of the 500T.

Because the 500T can run Windows 7 desktop apps, it runs full Evernote.  My entire life is on Evernote and I have been paperless for years because of it.  Quite frankly, Evernote for Metro is unusable.  It doesn’t sync in the background, crashes a lot, doesn’t handle viewing or adding attachments properly, cannot format, does not support audio notes, and does not support “Places”.  Other than that it’s great. The Evernote folks have been busy working on their iOS and OSX upgrades but I sure hope they get to Windows 8.

I will never understand why some tablets have such crummy cameras.  This includes the iPad and Surface, too.  It literally costs a few dollars to improve it.  I get the segmentation reasons and that every penny counts, but we are talking $500-700 devices.  I was quite pleased with the 500T’s camera as it captured stills at 8MP and vide at 1080P.  This is comparison to Surface’s 1MP still and 800P video capabilities.  Why would anyone want to take pictures or videos with a tablet given it looks so geeky?  In meetings I take pictures of white boards and even slides being presented.  Also, because cameras drain so much smartphone battery life, many times I will use a tablet because it will last so much longer.  So yes, I am the geek taking photos and videos of their kid’s volleyball game with the tablet.

Most people expected some monumental difference in battery life between Intel and ARM-based tablets.  I did a year ago, too.  I have not experienced any discernible difference between the 500T and Surface but some reviewers have noticed differences.  Given no one even thought Intel could even show up to this tablet battery life battle, Intel has proven a lot.

From cold start, the Samsung 500T started up extremely quick in around 13 seconds.  This is in sharp contrast to Surface which took around 29 seconds to start.  I think the last major update slowed the cold boot start for Surface, which is odd.  Users won’t need to do this often unless they run out of battery life because both devices support connected standby. The Samsung 500T and Surface, once on started immediately came to life and had updated content.

The Samsung 500T is a full PC, meaning you get the advantages and disadvantages of a PC.  It is very easy to load an app that can bring it to its knees, like a video encoding app or game like Call of Duty.  If you want to run a program like that, you’d be better off getting an Ultrabook or ultrathin, but be prepared to pay a lot more.  So I did need to be aware of what was running in desktop if I noticed something was slow in Metro.

It’s also real easy to run out of storage.  I loved the synced files, but it does require that you have enough to store the data.  This may sound trite, but for many basic users, this is difficult.  Finally, I did notice that when I did restart or turn the 500T off, some app or process would keep it from shutting down.  Just like a full Windows PC.

Where to From Here?

This blog is about sharing my initial experiences with the Samsung 500T and not meant to be a sweeping analyst opinion piece on Intel versus ARM.  I will follow up with that as soon as I have used more Windows RT and Windows 8 systems.  That’s only fair. What I can say is that Intel has delivered every bit as good of a tablet experience as anything ARM-based companies have delivered so far, if you know how to navigate a Windows PC.  The Samsung 500T is responsive, thin, light and has good battery life.  In addition, it runs Windows 7 desktop apps, too, unlike Windows RT devices like Surface.  That cuts both ways in that an unsophisticated user could easily make a mistake and flood it with too much processing and/or storage from a Windows 7 desktop app.  But if you know what you are doing, you won’t do that.

What I can definitively say right now is that it is “game-on” between Intel, NVIDIA and Qualcomm in the Windows mobile space.