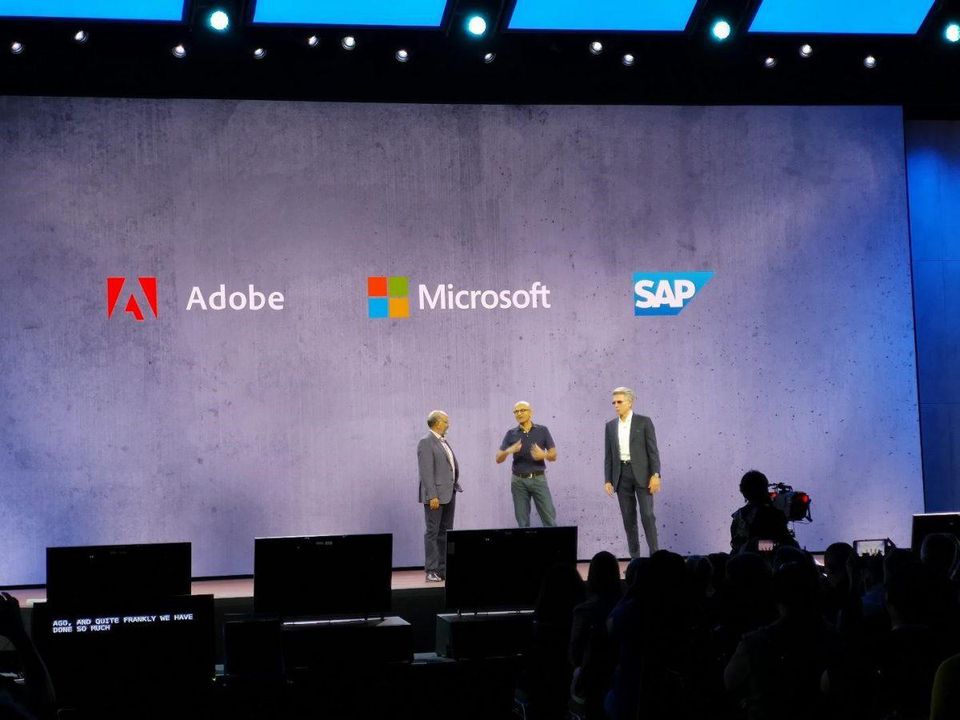 This week I’m attending Microsoft Ignite 2018 in Orlando, FL, the tech giant’s annual customer and CIO conference. In comparison, Microsoft Build is primarily for developers and its ecosystem and Inspire is for its partners and channels. I make a point to attend the Ignite (see my coverage of Ignite 2017 and Ignite 2016 if interested). The last couple of years have all been about Microsoft’s moves from a creator of on-prem solutions to Azure XaaS and cloud solutions. Moor Insights & Strategy analysts Chris Wilder and Karl Freund will be covering the IoT and ML news to come out of the event respectively. I’ll be breaking my coverage into three different blogs—today’s will cover the new Open Data Initiative and cybersecurity, while the next will cover Microsoft’s vision for the modern workplace and finally a piece on Surface Hub 2. Without further ado, let’s dive in.

Without a doubt the biggest piece of news from Day 1 of the conference was the unveiling of the new Open Data Initiative (ODI)—a joint effort between longtime partners and sometimes competitors Microsoft, Adobe, and SAP that should allow enterprises to better connect, utilize, and govern their data, while supporting privacy and security initiatives.

Many businesses today are unable to get a full picture of their customer interactions and operations due to data being locked up in internal and external “silos.” The ODI seeks to eliminate these silos and liberate the data within so that businesses can fully leverage it. This problem is amplified when enterprises want to apply ML or even real-time ML. Most of the time to do ML training is “data cleansing” or getting the data into regimented and more standardized formats. Each company, whether it be Microsoft, Adobe, SAP, Salesforce.com Inc and Oracle have different formats and the data is likely in different places. The ODI, on the new organization’s words, is based on three notions:

To accomplish this, the three companies are planning on improving interoperability and the ability to exchange data between their respective applications and platforms, through a common data model and data lake service on Microsoft Azure. Users running Adobe Experience Cloud, Adobe Experience Platform, SAP C/4HANA, SAP S/4HANA, and, of course, Microsoft 365, will all be able to benefit from this unified data store. Enterprises should be able to more easily move their various data to and from the data lake to suit their needs, create data-driven digital feedback loops, and design smart applications that comprehend data from offerings across Adobe, SAP, Microsoft, and their partners’ portfolios.

I had the chance to do some NDA briefings with Microsoft, SAP and Adobe and all I can say is that this is not a paper launch, there has been a lot of work already done, but not complete yet.

ODI is exactly what enterprise customers are looking for and is a brilliant move for the companies. SalesForce and Oracle are looking like serious outsiders right about now, but Microsoft CEO Satya Nadella made it clear at the conference that there is a standing invitation for “others” to join.

Microsoft also took the opportunity Day 1 to unveil its biggest round of enterprise security announcements since RSA earlier this year (read my coverage of that event here). First, it announced Microsoft Threat Protection, its most comprehensive, end-to-end security solution. For those who have been following Microsoft security, MTP is Advanced Threat Protection (ATP) plus new data. MTP integrates all of the company’s threat protection solutions (spanning email, PCs, docs, identities, and infrastructure) into one unified Microsoft 365 experience. MTP leverages intelligence and the company’s vast wealth of data and should, on paper, better protect against, detect, and if necessary, mitigate the effects of cyber threats.

Microsoft also announced that Microsoft Secure Score, originally announced at RSA 2018, is expanding to cover all of Microsoft 365. Secure Score is billed by Microsoft as the only “dynamic enterprise report card for cybersecurity” in the industry and based upon my analysis, this is true. This offering provides customers with an overall benchmark score, allows them to compare their score with other similar organizations’ results, and provides security recommendations that Microsoft says can reduce the chances of a breach by as much as thirtyfold. Microsoft also announced that Secure Score is coming to the Azure Security Center, to cover hybrid cloud workloads. I’ve been bullish on Secure Score since its unveiling—I’ve long held that the enterprise needs a proper, standardized security benchmark system. I’m excited to see the scope grow as more data and use cases is better security.

Another new feature Microsoft introduced at Ignite was password-free sign-in via the Microsoft Authenticator app. Instead of utilizing passwords, which as Microsoft says, is the number 1 security liability for businesses, users can now use multifactor authentication (biometrics, phone, PIN, etc.) to log into thousands of Azure Active Directory connected apps. Microsoft says this can reduce compromise by as much as 99.9%—if true, I would say this makes going password-less a no-brainer.  Consumers can use the authenticator app today (I use it), but this extends to anyone in AD. All I can say is it’s about time.

Microsoft also announced that it was bringing Azure confidential computing to its new DC series of Azure virtual machines, backed by Intel Xeon processor SGX technology. Azure confidential computing, for those unfamiliar, is Microsoft’s first-of-its-kind solution for protecting data while it’s being processed in the public cloud. This will be available in preview in early October.  Data needs to be secured at rest, in motion and when being processed and this completes the circle.

At the event, we also learned that Microsoft is introducing a new unified labeling experience within its Security & Compliance Center, which should create a more integrated, standardized approach to creating labels for data sensitivity and retention. Google announced features like this for GSuite a few shows ago,  This feature gets most if not all Microsoft products in alignment and makes it easier to go “all in” on Microsoft 365, EMM and Azure.

The last security related item I wanted to touch upon is Microsoft’s Defending Democracy program, designed to protect political campaigns from hacking, increase electoral security, defend against disinformation, and make online political advertising more transparent. A key part of this initiative is Microsoft’s new AccountGuard service, which extends state-of-the-art cybersecurity to political candidates and campaign offices at all levels of government, free of charge. Microsoft announced that in AccountGuard’s first month of operation, it onboarded over 30 organizations. The company plans to eventually extend the Defending Democracy program to democracies across the globe.

Microsoft is surely becoming one of the “go-to” security companies, one that can secure data at rest, in motion and being processed whether it be on-prem or cloud clients, servers and IoT.

As you can see, there was plenty to chew on. The Open Data Initiative is the biggest piece of news here. I think it’s a smart move by Adobe, SAP, and Microsoft that has the potential to usher in a new, more open era of enterprise data governance. I look forward to seeing whether or not some other big enterprise players (cough, cough, SalesForce.com and Oracle) to get on board. The security announcements all demonstrate Microsoft’s continued commitment to keeping customers’ data safe. Stay tuned Part 2 of my Ignite 2018 coverage, in which we’ll dive into Microsoft’s vision for the modern workplace.