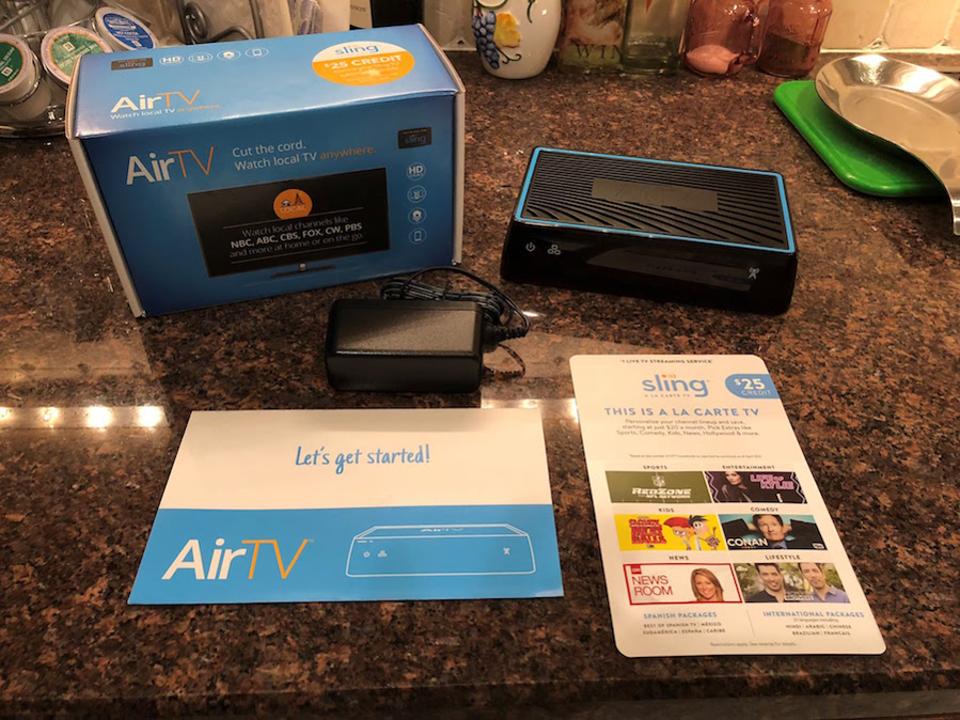 In my past several columns, I’ve been making the case that it’s never been a better time for consumers to cut the cord from their current cable or satellite provider, due to the plethora of low-cost “Over The Top” (OTT) premium content services now available for streaming. When combined with an “Over The Air” (OTA) solution (which allows you to capture local channels in HD, free of charge) the decision to cut the cord almost becomes a no-brainer. A new solution called AirTV, while not perfect, delivers on this promise and should be seriously considered by any consumer looking to cut the cord.

The major accomplishment of AirTV—and it cannot be overstated—is that it captures OTA content at a single point and it distributes it within the home. In this regard, AirTV is ultimately an “OTA”-style Slingbox. It utilizes an OTA tuner and uses the Sling TV app to seamlessly integrate OTA and Sling TV channels together. The consumer simply attaches an antenna to AirTV’s coaxial jack, connects AirTV to their home network via wireless or Ethernet, and “streams” OTA channels to other TVs in the home, using any of the major streaming devices (Roku, AirTV, Amazon Fire TV or Apple  TV, for example). The exciting thing about this approach is that OTA channels could be streamed from the home to any other mobile “on the go” device with an Internet connection—just like with a Slingbox. 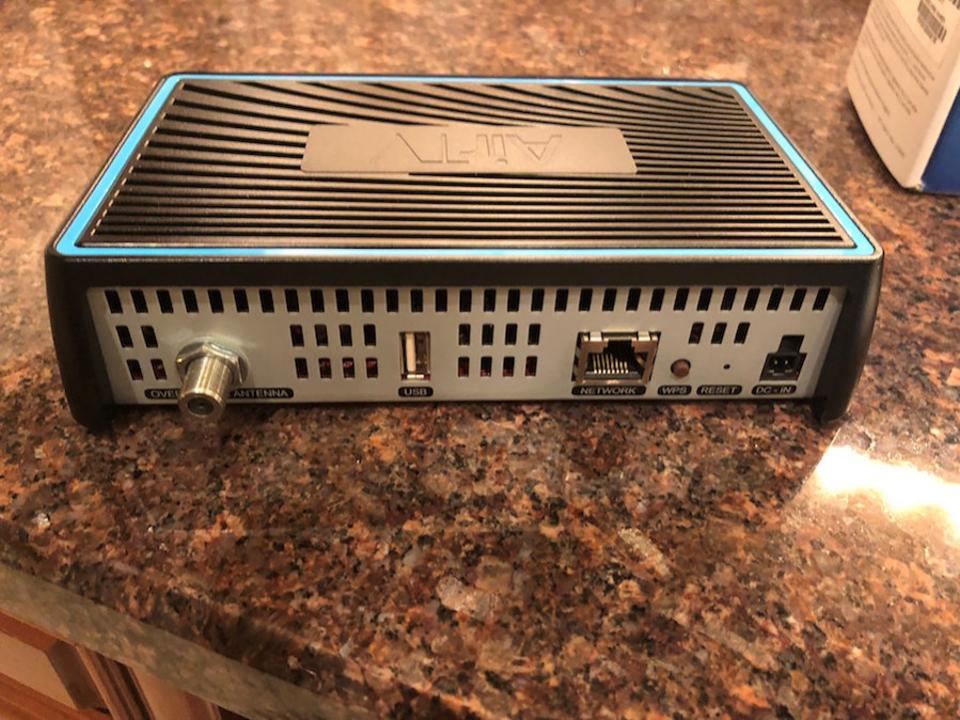 The AirTV view from behind.

Ideally, you’ll want to set up this new AirTV unit near a window seeing as it will need to be connected to a decent amplified antenna. In my testing, I used a General Electric Pro Crystal HD Amplified Antenna, which I purchased for $27.99 from my local Target. I had reasonable results with it, and was able to get access to about 20 local OTA channels (including the local ABC, CBS and NBC affiliates in the Princeton, New Jersey area). However, as with any undertaking like this, I’d strongly encourage consumers not to economize their antenna purchase and even consider mounting the antenna on the roof to maximize reception. Again, Mohu (www.gomohu.com) and Winegard (www.winegard.com) are among the leaders in the antenna space and offer numerous options for you to consider.

For the sake of the review, I decided to connect to my home network via a wireless connection—most consumers will not have easy access to a router for a hard-wired LAN connection. AirTV’s integrated wireless capability is based on 802.11n—disappointing given that the world has migrated to the significantly faster 802.11ac specification over the past several years. Since I wanted to test the wireless range of AirTV with several other devices inside of my mom’s 1,800 square foot home, I was concerned that I would sacrifice video quality due to the slow wireless spec—more on this later.
One word of caution: during the initial setup I had to do a hard reset, and because I was facing the unit from the front, I kept holding in the WPS button thinking that it would reset the unit. However, like many other products, you need a paper clip to insert into a small hole in the rear of the unit to initiate the hard reset. One of the setup screens with the AirTV and Sling TV app has misleading text about this, so I ended up wasting about 45 minutes before I discovered the error.  Once I moved beyond that hiccup, however, setup was a breeze.  Still, this problem resulted in wasting 45 minutes of my life that I will never get back. 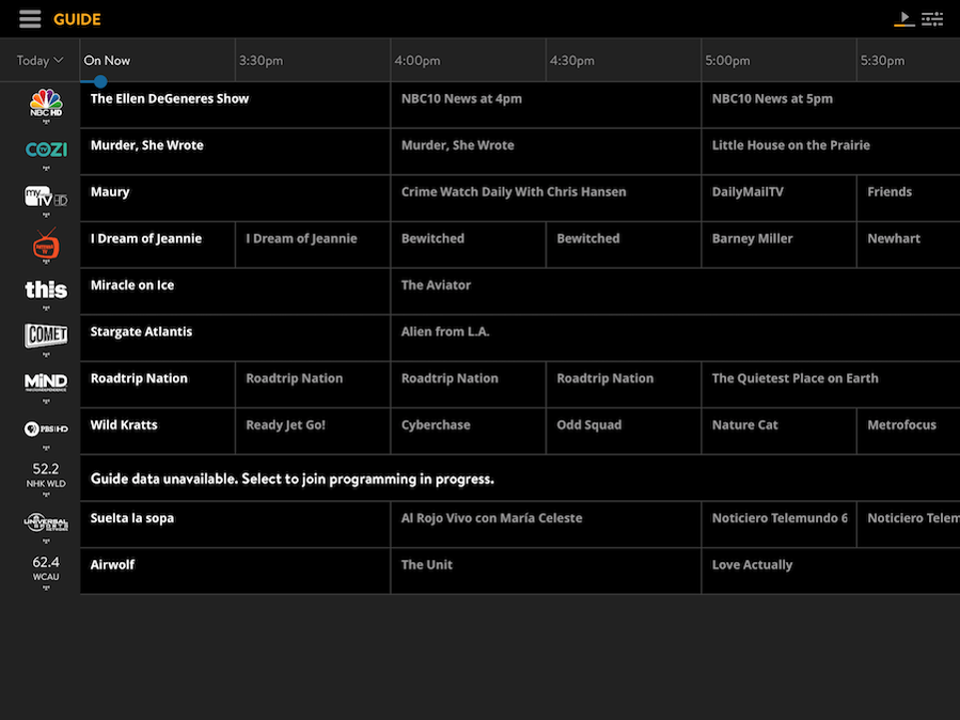 After you physically set up AirTV and attach it to an antenna, you simply plug the unit in to an AC outlet;  there is no power “on” or “off” button. Setup is enabled by downloading the AirTV and Sling TV apps, available in both the Apple  and Google Play app stores. Although the instructions don’t explicitly state this, which app you need to download depends on how you will use your AirTV unit. The Sling TV app will allow you to integrate the OTA channels that AirTV has access to. This is marvelous from a user experience standpoint, because you get all the benefits of a traditional linear channel guide that most consumers are already used to with their cable or satellite provider. The AirTV app, on the other hand, gives you simple and basic access to your available OTA channels based on the zip code that you provide during product setup.  Which one should you select? If you’re already a Sling TV customer, using the Sling TV app makes much more sense due to the integrated OTA and OTT content experience that it creates. Having said that, I noticed that I was not able to access my AirTV’s OTA channels when I was using the Apple TV and Roku’s Sling TV apps to watch content on large television screens. I was able to access to both OTA and OTT content (Sling TV channels that I’ve subscribed to) on the Sling TV app using my Apple  iPad. 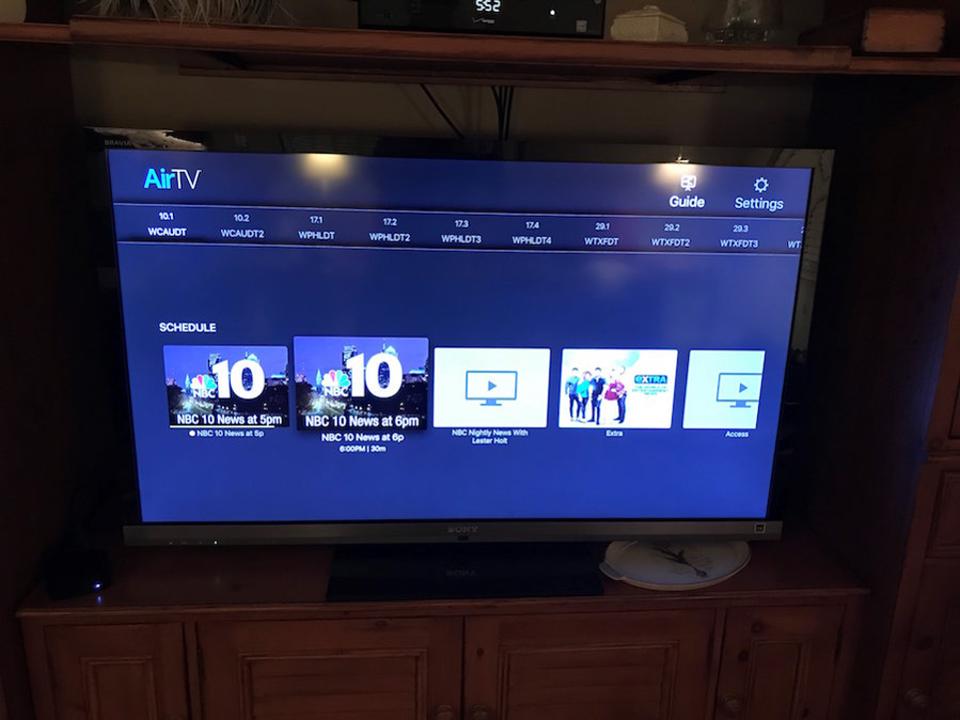 The AirTV app is intended for consumers who are not committed to the Sling TV service. The AirTV app (available on Roku, Amazon Fire TV, Apple TV and Google platforms), allows easy access to your AirTV and OTA channels on your large format television, as long as that TV is in the home where the AirTV is located. The tradeoff is that you lose the Sling TV app’s content integration—but you still have access to the numerous OTT streaming services (e.g. Netflix , Hulu, HBO NOW, etc.) available on the major streamer devices. Overall, the AirTV app provides more flexibility; most consumers will want to watch OTA channels on their large home televisions, and they already have pre-existing subscriptions with the major OTT services.

As I mentioned above, my initial concern was that AirTV’s 802.11n wireless capability would provide a poor viewing experience with other devices in my mom’s home. My mom has decent, though not exceptional broadband connectivity (80Mbps), and her router is 802.11ac enabled. Still, I really thought that the AirTV’s relatively slow wireless spec would be a bottleneck.

To my delight, I was able to access all HD OTA channels that AirTV was able to access in high quality video. If AirTV was already tuned to a specific channel, I experienced almost zero latency. I did see some modest (3-4 seconds) latency when I changed channels (which I expected to), but I did not experience any pixelization or video artifacts when tuning to a new channel. I was able to watch my woeful New York Giants (whose games are contractually obligated to be locally broadcast every weekend) from my mother’s home in New Jersey, on my iPhone X, using the AirTV app—and my video experience was enthrallingly strong, even on a LTE cellular connection. In approximately 12 hours of video consumption over the Christmas weekend (in indoor and outdoor usage situations), I did not encounter a single instance where the video froze or stalled. Much credit for this terrific video quality is due to the Pixelworks transcoder technology embedded in AirTV, which efficiently compresses/decompresses video content prior to transmission.

One final note: AirTV is apparently equipped with a dual tuner. Although I wasn’t able to test this during my weekend evaluation, AirTV is built to support two simultaneous streams of OTA content—though only one OTA channel can be accessed outside the home.

At an affordable $119.99 (which will easily pay for itself in just a few months), this new AirTV release is a powerful product that I count among the best cord-cutting solutions in the market. I’m not thrilled about the fact that the Sling TV and AirTV apps can only access my OTA channels on mobile devices when I’m outside of my home—I absolutely would like the opportunity to watch that content on a large format TV. AirTV also comes up short by not providing any type of DVR support for the OTA channels that it captures, even though there is USB port on the product which presumably could be used for that function (the www.airtv.net site is mum on the subject). These quibbles aside, AirTV’s ability to stream OTA content to other devices inside the home, as well as outside the home (even if only on mobile devices), is a breakthrough that many consumers will find incredibly useful during their daily commute or when vacationing.

This new AirTV model is now available for sale via the www.AirTV.net Web site and the product is now shipping.