Amazon.com today released for sale a tablet that sounded too good to be true…. a 7″ quad core tablet for a mere $50. It took me about 15 minutes to realize that there were a lot of “fine print” to the deal and I think you need to be aware of them before you buy or before you recommend it to friends and family.

Ad subsidized- Like some of its past products, Amazon.com is subsidizing the tablet by showing you ads on the lock screen. But you don’t know that until after you have added it to your cart and are about to check out. Someone said I should have known that because the line listing says with “special offers”. Since when was an ad a “special offer”? If you don’t want ads, then Amazon.com will let you pay them $15 more to remove the ads. 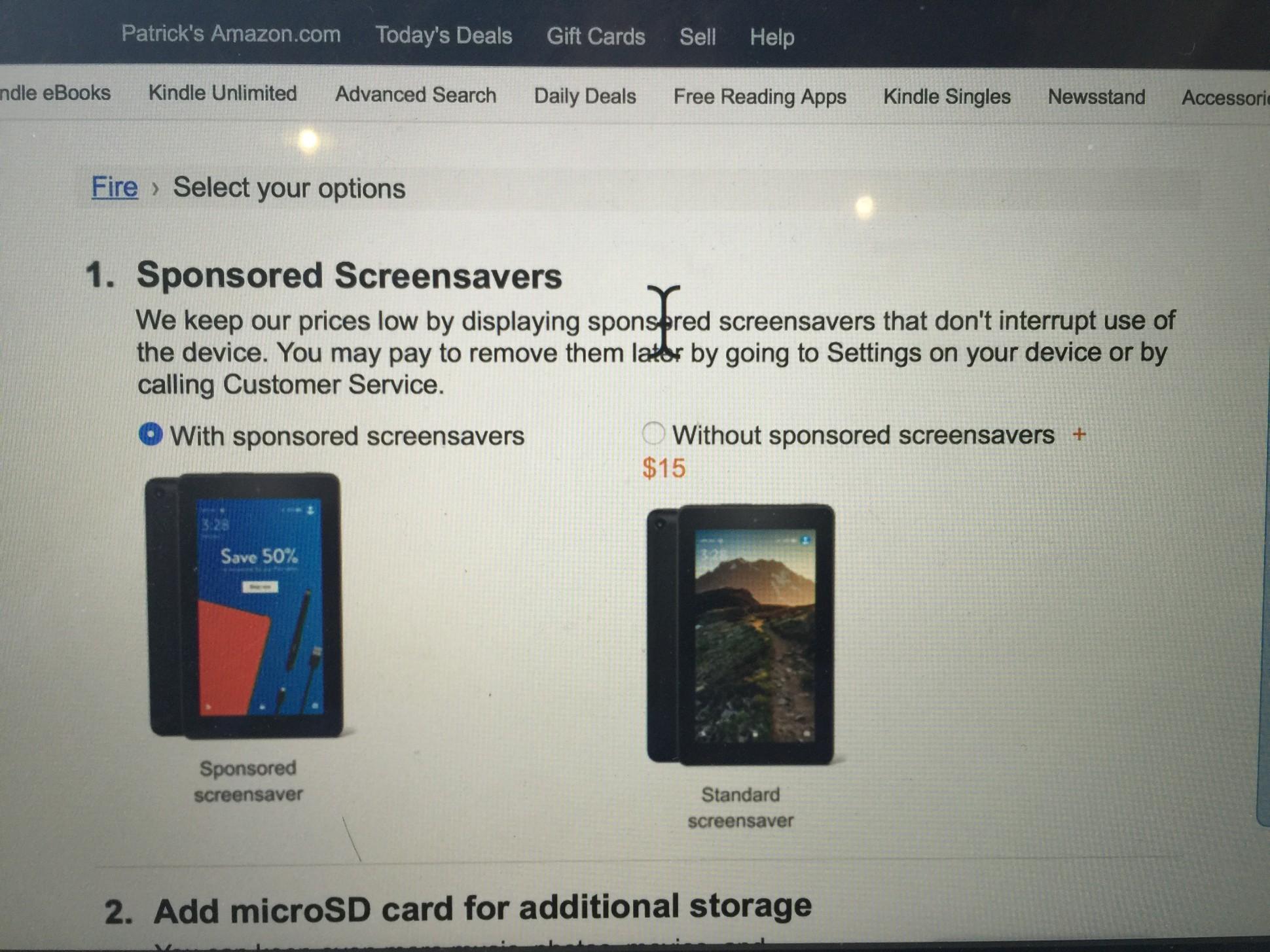 Generic quad core processor and generic graphics- Amazon.com isn’t saying which brand of processor it has on-board, but Amazon.com must think it’s pretty special as it is the #2 feature listed after the display. It is most likely a processor based on ARM Holdings low-end A7 processors in the lowest end phones today in the U.S. These cores are nearly half the performance of the A9 cores. It could be the Intel Atom Z3740. No one knows. Without listing what the processor is, I have to assume that it isn’t very good, so I have to I expect the tablet to feel very slow, especially with the overlay Amazon places on top of generic Android.

Graphics aren’t even mentioned but of course graphics are included. I’m not expecting graphics-intensive games to play well on this tablet but I could be wrong. I’ll need to test it myself to be sure. Or if Amazon would cite what kind of graphics processor it is, I could estimate how it would perform.

(UPDATE: Both Imagination Technologies, here, and Mediatek here, kindly reached out to me over Twitter and told me the following:

Mediatek’s comment over Twitter, in what I’m sure is an honest mistake, contradicts what Amazon’s developer page states. Amazon’s developer page states that the $50 tablet has the Mediatek MT8127 D, not the MT8135. The MT8127 is a much lower performer than the MT8135. I did some digging and found Mediatek’s MT8127 product page. As I had predicted, the MT8127 has four ARM Holdings A7 processor cores, lower than the A9, A15 or A53. I do not know exactly what the “D” stands for as I could not find any web documentation, but I’m assuming it’s just a non-architectural revision. Additionally, according to Mediatek’s MT8127 product page, the processor does not come with Imagination graphics, but rather ARM Holdings Mali graphics.

Now that we now know what processors are inside (kind of), I am looking forward to running benchmarks on the tablet. Only benchmarks of the tablet itself are valid as any change in memory capacity, speed, and software loads, among many things,  can impact performance.)

1GB RAM- Most modern-day tablets have 2GB of RAM or memory. Having less memory generally means the tablet will most likely be very slow as it swaps data back and forth between faster memory and slower storage.

5GB available storage- The Fire comes with 8GB of storage, 5GB which is available for books, videos, apps and games. 5GB is about the least amount of storage one can get on a modern day tablet in the U.S. It limits you to a few apps, videos, and games. Essentially you are forced to upgrade to an SD card if you want to have a usable tablet and Amazon.com would be glad to sell you a 32GB card for an extra $19.99.

SD (not HD) Display- The Amazon.com Fire will not display videos in 720P or 1080P resolution. This means you are stuck with standard definition content display playback. For lack of a better term, the tablet will play it back at 600P. I really like that the display is IPS, but that 1,024×600 resolution is weak and you will no doubt be able to see pixels as you watch videos.

Oh and if you previously had an Android phone or tablet and bought your apps, games, movies off of Google Play, they will not run on this tablet.

You could download your music however, but make sure you upgrade the storage first for an extra $19.99. Amazon.com says that their store has “300,000 apps and games” but be aware that this is order of magnitude lower than what you can get from Google Play. Statista says that as of July, 2015, the Google Play Store had 1.6M apps. Oh and those apps like your kid’s volleyball club? It probably won’t be on the Amazon store. My kid’s clubs aren’t.

Includes power adapter- This is good as most low cost tablets don’t include one.

Durability versus iPad Air- Amazon.com is saying that the tablet is “almost 2x more durable than the latest iPad Air.” I could find absolutely no details on what this means or how it was tested. Is this if you drop it on its display, its side, or the back? If such a big claim is made like that I think the consumer deserves an explanation.

Some people may be thinking, “what do you expect from a $50 tablet”? It is “buyer beware” and I want to make sure those consumers know that some great deals are truly to good to be true. If you were wondering, I did place my order for one to test the experience and run a few industry standard benchmarks on it. Let me know in the comments section if I should test something.