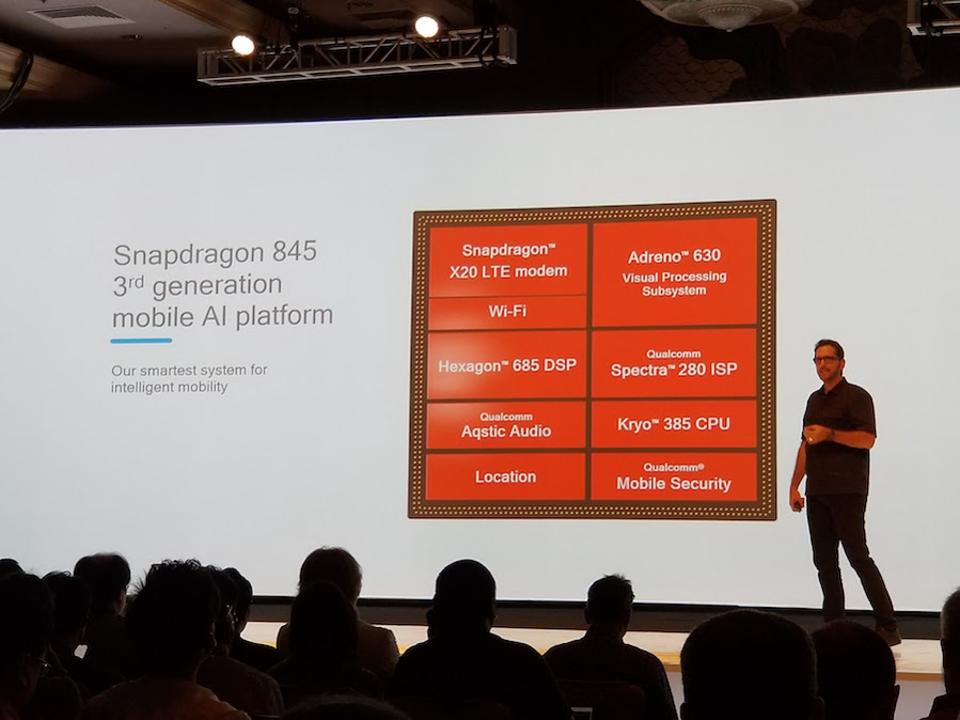 Qualcomm  has finally lifted the veil off its Snapdragon 845 processor. It has been one of the most awaited announcements of the year, with products based on it expected to be available in the first half of 2018. Qualcomm’s  Snapdragon 845 represents a sizeable uplift in the company’s flagship SoC offerings with significant improvements across the board while remaining on Samsung’s 10nm process node. The decisions that Qualcomm made with the Snapdragon 845 are indicative of where the company believes the market is going, and likely where many Android manufacturers will go with their flagship phones.

Qualcomm made major improvements at the core of the Snapdragon 845, with its new Kryo 385 CPU. This CPU incorporates customized versions of ARM’s newest A75 and A55 CPU cores. The A75 CPU cores are up to 30% faster than the previous generation, clocking as high as 2.8 GHz. Qualcomm has also implemented 2MB of L3 cache, which is designed to improve efficiency and latency across the CPU. ARM’s DynamIQ system controller is also inside of the Kryo 385, which Qualcomm QCOM +0.45% says will help further improve efficiency and latency—particularly in tasks like AI.

Qualcomm has made equally impressive performance improvements in the GPU—or as Qualcomm  refers to it, the “visual processing subsystem.” Qualcomm ’s new Adreno 630 GPU is the next generation of the company’s graphics IP, featuring a complete rework from the ground up. As a result of this complete architectural redesign, the GPU boasts a performance increase of 30% over the Snapdragon 835. Similarly, the new architecture also enables it to maintain the same level of performance with a 30% power reduction (which may be more beneficial for thinner and smaller form factors). All told, Qualcomm  is accomplishing a significant amount of performance and power reduction all while still using Samsung’s 10nm process node.

Another significant improvement is the Snapdragon 845’s image signal processor (ISP), the Spectra 280 ISP. This ISP is the core of what allows Qualcomm  to enable its OEMs to have such great camera experiences. With the new Spectra ISP, there is a much stronger focus on pixel quality and color volume, which results in more accurate, more vibrant and more lifelike photos and video. Qualcomm is going to be the first with Ultra HD Premium video recording, which translates to being able to capture 4K HDR video footage. Qualcomm is leading the charge with video once again, as it was with the first 4K video capture, and it’s great to see the company empowering the ecosystem by helping to seed it with user-generated HDR content. The new Spectra 280 ISP will allow next year’s smartphones that are already equipped with HDR-capable displays to also record videos in HDR as well, which will improve the user experience.

In addition to the new CPU, GPU, and ISP, Qualcomm  has also integrated a new Hexagon 685 DSP, designed to help accelerate many different types of workloads at low power (including voice and image recognition). These workloads include AI inference, but because of the way Qualcomm’s  Snapdragon processors perform AI inference, there isn’t one specific processor for AI. The whole chip is used to accelerate AI inference—as a result, Qualcomm can support more AI frameworks in mobile than anyone else does, at blazing real-time speed. Qualcomm is at the forefront of AI and machine learning, and the company has been too busy working on it to tell anyone how much it’s already accomplished. In fact, there’s so much to talk about there, that we’ll have to save it for another blog.

In case all these improvements weren’t enough, Qualcomm also decided to include a new Secure Processing Unit: a new ‘secure vault’ where Qualcomm isolates all of the mission-critical security functions from the rest of the SoC. These security functions include digital key management for user passwords, application data, and other sensitive user information, such as biometric data. Hackers are always finding ways to defeat the previous generation of secure software and hardware; it was likely necessary for Qualcomm to implement this new Secure Processing Unit. The need is particularly evident when you consider how much payment data and biometric user data is passing through smartphones today.

Qualcomm claims it can achieve 1 Gbps with as little as 10 MHz of available licensed spectrum (when combined with unlicensed), but that seems like a stretch. What is notable, however, is that the Snapdragon X20 inside of the Snapdragon 845 also brings dual SIM, dual VoLTE capability to the platform, making both SIMs equal in ability. Also, with the new Bluetooth TruWireless technology, Qualcomm has solved a major pain point with Bluetooth connectivity—Snapdragon 845 allows virtually infinite Bluetooth connections. This should change how many users’ phones will interact with the numerous Bluetooth devices around them.

When you look at all of the essential improvements and performance uplifts that the Snapdragon 845 is bringing to market, you start to realize how significant this little chip is. We’re seeing 30% performance improvements on the SoC almost across the board. There’s no doubt that the next generation of smartphones featuring Qualcomm’s new processor is going to put this past year’s to shame—especially when you consider sheer performance, AI capabilities, and visual quality improvements. 2018 is looking promising for flagship phones.