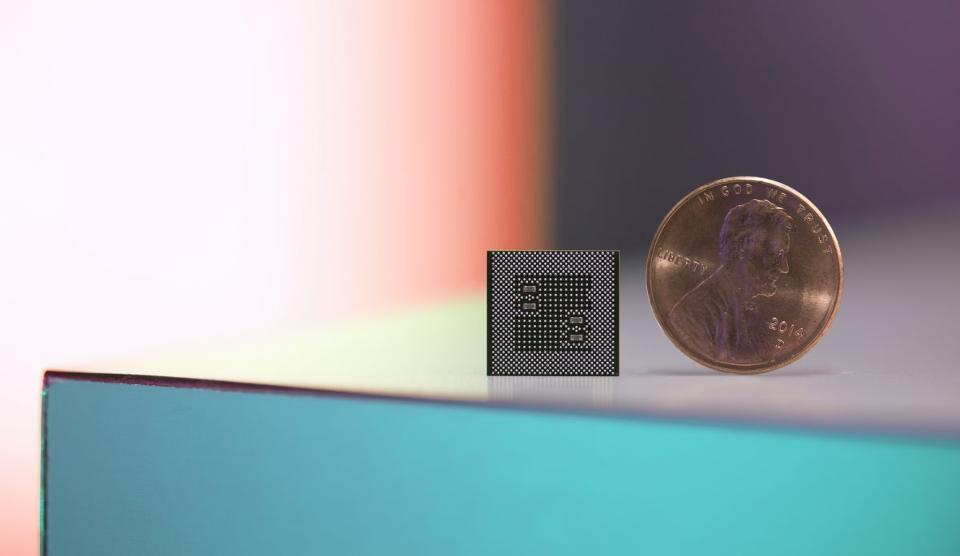 Qualcomm has been known as one of the leading wireless chip suppliers and has also been considered one of the best SoC makers. Qualcomm has shifted from calling the Snapdragon 835 an SoC or chip and transitioned towards calling it a platform. This is fair considering how many different processors reside on a Snapdragon SoC, but at the same time it is still a system on a chip, so both are fair. I believe Qualcomm is moving in this direction, because certain components of the SoC are becoming commoditized, and the focus should be on whole system performance and battery life, rather than individual components.

However, to test a whole SoC’s performance you would need to develop your own manual tools to test application performance and power consumption. As a result, many performance metrics are focused on individual, easily quantifiable components like the CPU and GPU. So many benchmarks for smartphone performance are done via testing the phone’s CPU and GPU performance. Some test for memory and latency, and others test overall browser performance. Other than that, there aren’t easy ways of testing the SoC’s DSP, Video Engine, ISP, Modem, Sensors, Wi-Fi, all which reside on the same chip as the CPU and GPU.

For our testing, we used several synthetic benchmarks and some real-world benchmarks. These benchmarks, as many might tell you, are not always representative of final device performance, especially considering the Snapdragon 835 device Qualcomm gave to us was their own development platform and not a commercial device. Once commercial devices roll out, then we will have a real idea of the Snapdragon 835’s performance. Considering past Snapdragon previews, I would expect companies like Samsung Electronics and Motorola and other Qualcomm customers will likely be close to these numbers and maybe even beat them with their own system designs.

Testing: We compared the Snapdragon 835 against the Google Pixel with a Snapdragon 821. We also included the iPhone 7 Plus with Apple AAPL -0.03%’s A10 SoC and the Huawei Mate 9 featuring its Kirin 960 SoC. These are all supposed to represent the fastest SoCs available in North America.

AnTuTu: While I am not the biggest fan of AnTuTu, users like it for a quick performance check, and it has improved over time. It is also usually one of the first benchmarks seen when a new device comes out. In terms of performance, the Snapdragon 835 is the fastest SoC of the four devices, slightly beating the Apple A10 in the iPhone 7 Plus by about 2%—almost within the margin of error, but we ran these tests multiple times and got these average results. The Snapdragon 835 is 30% faster than the Huawei Mate 9 and 36% faster than the Snapdragon 821. 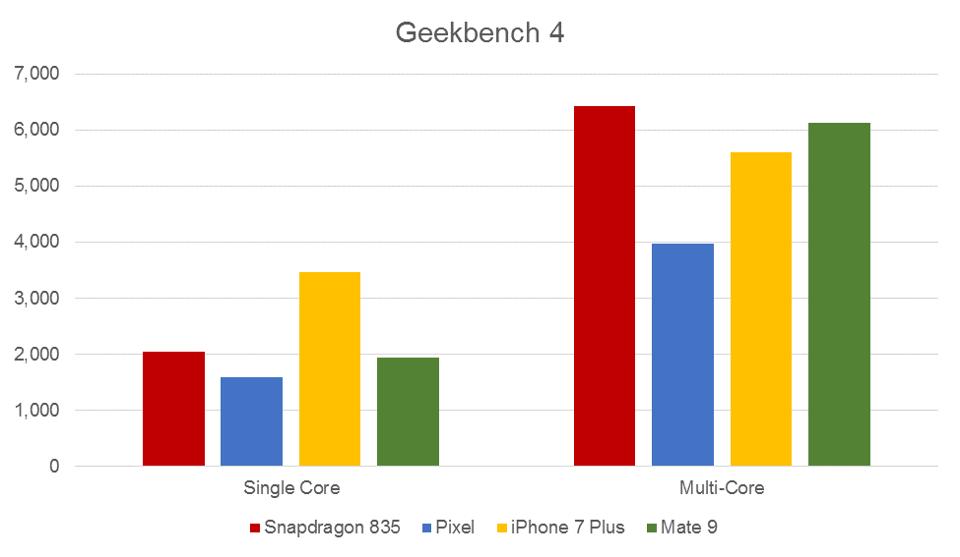 3DMark: 3DMark is a graphics benchmark that comes from the PC gaming world and is designed to simulate high performance graphics mobile scenarios. It is one of the most consistent benchmarks, but it is still synthetic and only measures the performance of the GPU and little else in the SoC. In 3DMark, the Snapdragon 835 beats the other SoCs by 30% and up to 41% against the A10 inside the iPhone 7 Plus. The GPU may be where the Snapdragon 835 performs best against the competition.

GFXBench: In addition to 3DMark, we tested GFXBench, which is also a graphical benchmark but behaves differently from 3DMark. We run both for consistency and variation between different tests. Because different devices run at different resolutions, the result that matters is the “Manhattan Offscreen” test, which tests the GPU irrespective of the device resolution.

JavaScript: JavaScript benchmarks are designed to test both browser performance and apps that run JavaScript. Here we are looking for the lowest score, as opposed to highest. Both Kraken and Sunspider are a bit dated but still show how fast each SoC performs. In Kraken, the A10 was twice as fast as the Snapdragon 835, while the Snapdragon 835 was 15 to 18% percent between the Pixel and Mate 9. 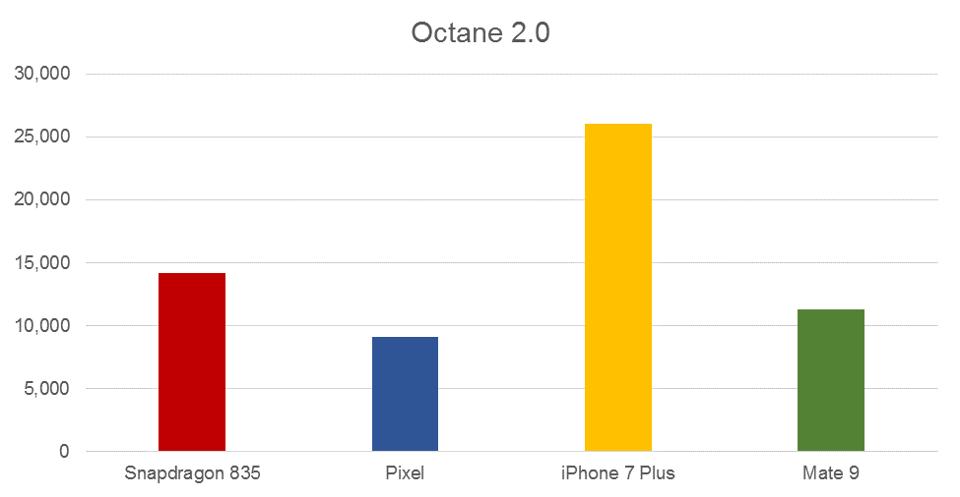 Conclusion: The Snapdragon 835 is an improvement over the Snapdragon 821 and other competitors’ chips in many ways. We did not test for power consumption, but from the testing that Qualcomm showed us on their development boards, the Snapdragon 835 lowers power about 30%. Granted, what they showed us were 4K video encoding and VR applications, but those are valid applications for today and the future. Based on our testing, the Snapdragon 835 platform looks to be a welcome addition to the Android family of SoCs and should elevate devices that use it to high-performance levels rarely seen before.