Last Thursday at Qualcomm’s Financial Analyst Day the company made a slew of chip announcements ranging from the industry’s 1 Gbps wireless LTE modem to a custom designed smartwatch SoC and platform called “Snapdragon Wear 2100 SoC”. In between those, Qualcomm also announced a few very overlooked chips that help strengthen Qualcomm’s position in the mid-tier of the market, which is still the fastest growing portion of the smartphone. Contrary to some beliefs, Qualcomm is not reducing its focus on the smartphone market, but rather refocusing their efforts to better utilize their vast portfolio of smartphone IP in SoCs. These new chip announcements are all perfect examples of this new focus, giving added value where Qualcomm can with their own IP without undercutting the high-end.

The Snapdragon X16 LTE Advanced Pro Gigabit modem is the most complex piece of this puzzle and also the crown jewel of Qualcomm’s financial analyst day announcements. As a result, I’ve written a separate piece detailing all of the technological improvements and implications. The X16 LTE modem harnesses Qualcomm’s latest and greatest R&D and modem technologies that could allow Qualcomm to continue to push the wireless envelope (literally) and help maintain their current leadership. Since modems is arguably one of Qualcomm’s strongest technological areas, it makes sense that they would announce this alongside all these other chips. That leads me to the next chips announcements, those are the Snapdragon 625, Snapdragon 435 and Snapdragon 425.

The Snapdragon 625, 435 and 425 are by no means Qualcomm’s highest-end processors, in fact they are squarely intended for the middle range of the market. All of these chips are updates on older chips like the Snapdragon 617, Snapdragon 430 and Snapdragon 410/415. The Snapdragon 625 is the fastest and most technologically advanced of the bunch. It is Qualcomm’s first mid-range smartphone chip that features the latest 14nm FinFET process technology that Qualcomm says helps reduce power by up to 35% over the previous generation Snapdragon 617. These power savings are huge because that means smartphone OEMs that utilize these chips can really see some crazy power savings thanks to the eight lower performance/power A53 CPU cores and the new X9 LTE modem with Cat. 7 down (300 mbps) and Cat 13 up (150 Mbps) support. It also has 802.11ac MU-MIMO wireless capabilities, which is something that has traditionally only been for high-end smartphone chips. 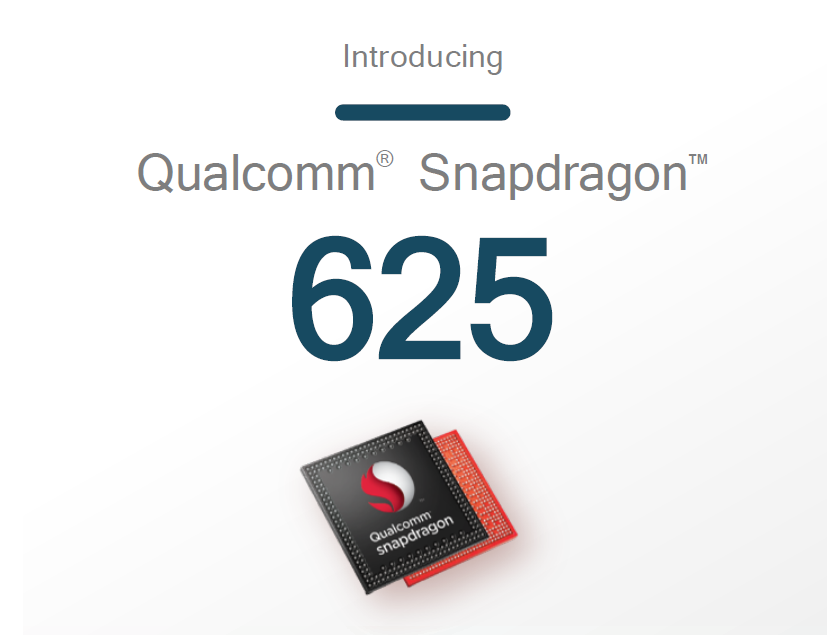 Qualcomm also added their 500 series Adreno GPU with the Adreno 506 in the Snapdragon 625, giving it extremely high graphical capabilities. They also added Qualcomm’s own high-end ISPs and DSPs to enable dual high-resolution cameras, up to 24-megapixel main camera and 13-megapixel front-facing cameras. For good measure, it also has Qualcomm’s latest QuickCharge 3.0 charging technology which is one of the fastest charging technologies I have seen to date.

This chip from top to bottom screams that it is intended for the Chinese smartphone market and I believe the likes of Xiaomi and ZTE will very eager to get their hands on these chips. Even though I am by no measure a fan of eight-core CPU SoC designs with eight A53 CPU cores, there is no denying that the Chinese market and Qualcomm’s Chinese customers are demanding them and they’re filling a need. Even so, this chip will still very likely be very popular in China, especially with its 4K hardware encode and decode capabilities, that should prove pretty popular as 4K displays continue get cheaper and more market penetration.

The Snapdragon 435 and 425 chips are also ARM Cortex A53-based SoCs, however they are 28nm processors, making them more affordable for OEMs as they are not using a leading edge process. The 435 is a slight upgrade from the Snapdragon 430, that has an eight core processor and adds a Cat 6 LTE modem which means download speeds of up to 300 Mbps and 2x CA, something that is becoming standard across the world. The Snapdragon 435 also adds differentiated features like an integrated Hexagon DSP and QuickCharge 3.0 which makes it an extremely attractive entry-level smartphone chip. The Snapdragon 425 on the other hand is only a quad core processor SoC, and is designed to replace the Snapdragon 410 and 415. However, it was designed to up the specs of Qualcomm’s entry-level SoCs and integrates a lot of technologies that smartphone vendors playing in that area might want to see in a single chip. Namely, those features are HD display at 60 Hz support as well as dual 13-megapixel camera support, 1080P video and a Cat 4 LTE modem with 2×10 CA for maximum download speeds of up to 150 Mbps. However, both the 435 and 425 also feature 802.11ac MU-MIMO wireless capability which shows Qualcomm bringing their wireless leadership with MU-MIMO all the way down to the 400-tier of SoCs. Qualcomm also included their QuickCharge 2.0 charging technology as well as their DSP and sensor hub to lower development costs for the OEMs in this price sensitive space.

What makes the Snapdragon 625, 435 and 425 so interesting is that they are all software and pin compatible so that OEMs in China and other developing markets can save money on PCB designs and software development. Qualcomm is clearly making these chips as a way to open up their potential customer base and take away customers from the likes of AllWinner, MediaTek, Rockchip and Spreadtrum. This is also where a few of Huawei’s HiSilicon chip live.

Qualcomm’s last chip announcement was probably the one that got the most attention outside of their LTE Advanced Pro X16 modem and that was the Snapdragon Wear chip. The Snapdragon Wear 2100 SoC is the first chip in their family of SoCs squarely aimed at the wearable market. Previously, Qualcomm simply repurposed some of their most capable low-cost chips like the Snapdragon 400 in order to satisfy short term demand for decent SoCs. In fact, most current generation smartwatches from Huawei, Motorola, LG and others feature Qualcomm’s Snapdragon 400. To me, this always seemed like a short-term fix until they actually built a purpose-built chip for wearables, which is exactly what the Snapdragon Wear 2100 SoC is designed to be. 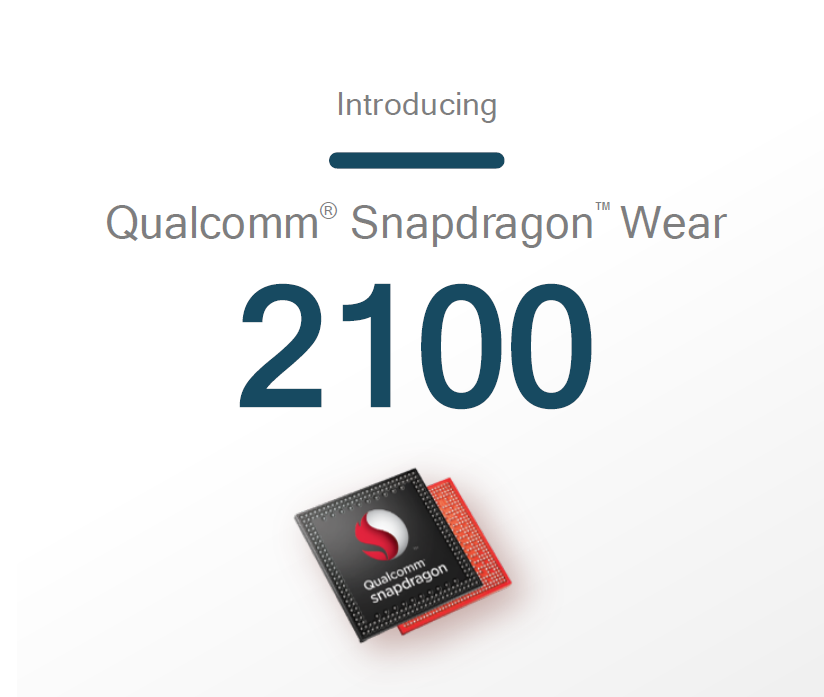 The Snapdragon Wear 2100 is first and foremost 30% smaller than the Snapdragon 400 which should leave more room for other components and frees up space for more battery or an overall thinner device. Qualcomm says the Snapdragon Wear 2100 is also 25% lower power than the Snapdragon 400 series processors which means that wearables with this processor should expect to have much longer battery life than ever before. The Snapdragon Wear 2100 has a quad core CPU with ARM Cortex-A7 cores which are clocked around 1 GHz paired with an Adreno 304 GPU and 400 MHz LPDDR3. This design makes a lot of sense when you think about the power sensitivity of most watches and how small their batteries are. Because of the move from A53 to A7 CPU cores, there should be a significant reduction in power consumption and very little difference in terms of performance as most wearables really don’t do much heavy on-board computing. Most compute is offloaded to the smartphone or cloud to save on power and improve on performance. This tiny little chip also features Qualcomm’s X5 LTE modem which allows for untethered voice and data like what AT&T offers with number sync that allows both your smartwatch and smartphone to share the same number and both take calls and use data. The Snapdragon Wear 2100 also has a built-in sensor hub like the Snapdragon 425. This once again shows Qualcomm harnessing their various IP advantages in modem, sensors and graphics to make their SoC the superior solution. I fully expect to see the Snapdragon Wear 2100 in a multitude of wearables this year, although Qualcomm hasn’t given any guidance of when devices with this chip will be available.

Qualcomm’s announcements yesterday at their Financial Analyst Day marked a major shift by the company to go after more of the mid-range market and to take the fight to their competitors. They are doing this with their renewed focus on their IP that gives them an advantage over their competitors like their modems, GPUs, ISPs, DSPs and other processors. It will be interesting to see how this renewed focus and improved new chips will attract Asian OEMs towards Qualcomm’s products and how many wearable manufacturers adopt their Snapdragon Wear platform.