Broadcom has held the unit share lead in Wi-Fi for years, typically being first to market with new Wi-Fi chips and reference designs that support the latest standards at attractive prices. Things could change as Qualcomm appears to have leapt over Broadcom with its new MU-MIMO (multi-user, multiple-input, multiple-output) Wi-Fi radio approach that comes straight from the carrier world where Qualcomm is the clear market and technology leader. I got the chance to see Qualcomm’s MU-MIMO solution in action at their latest industry analyst event in San Diego and I wanted to share with you my findings. Let me provide some background first.

While the speed of the newest “AC” Wi-Fi routers for the home greatly outperforms the speed of the best cable modem service, speed is still important particularly for intra-home communications and concurrency, and dealing with the average of seven devices inside the house, this is becoming even more important. Personally, I have 20-25 devices connected at one time. These are my personal devices, but also my wife’s, those of three kids and digital home devices like Wi-Fi thermostats, Wi-Fi lights, and a distributed music system, so congestion is a big deal to me. This brings us to MU-MIMO.

MU-MIMO was made for crowded home networks as it allows up to three devices to receive data at the same time, versus today’s technology that can only send one “packet” per user at the same time. Today’s “non” MU-MIMO technology only allows devices, one packet at a time, to receive data in a “round-robin” fashion. Interestingly, even non MU-MIMO devices would benefit if you had a MU-MIMO Wi-Fi router. This is because each of the legacy devices gets more airtime as the MU-MIMO clients are served as a group, and not in this “round-robin” fashion. This may seem a bit abstract, so let me explain what I saw live in the Qualcomm demo inside the lab.

The demo I saw included three client devices (two antennas each) and one Wi-Fi router (4 antennas), all of which support “AC” MU-MIMO along with “AC” and “N” non MU-MIMO. The demo then stuffed as much data as could be stuffed onto an “N” network, a good proxy for today’s typical home networks.

So essentially, in Qualcomm’s MU-MIMO demonstration, it showed a 3.6X improvement in speed versus the “N” device and a 3X improvement over a standard AC device. 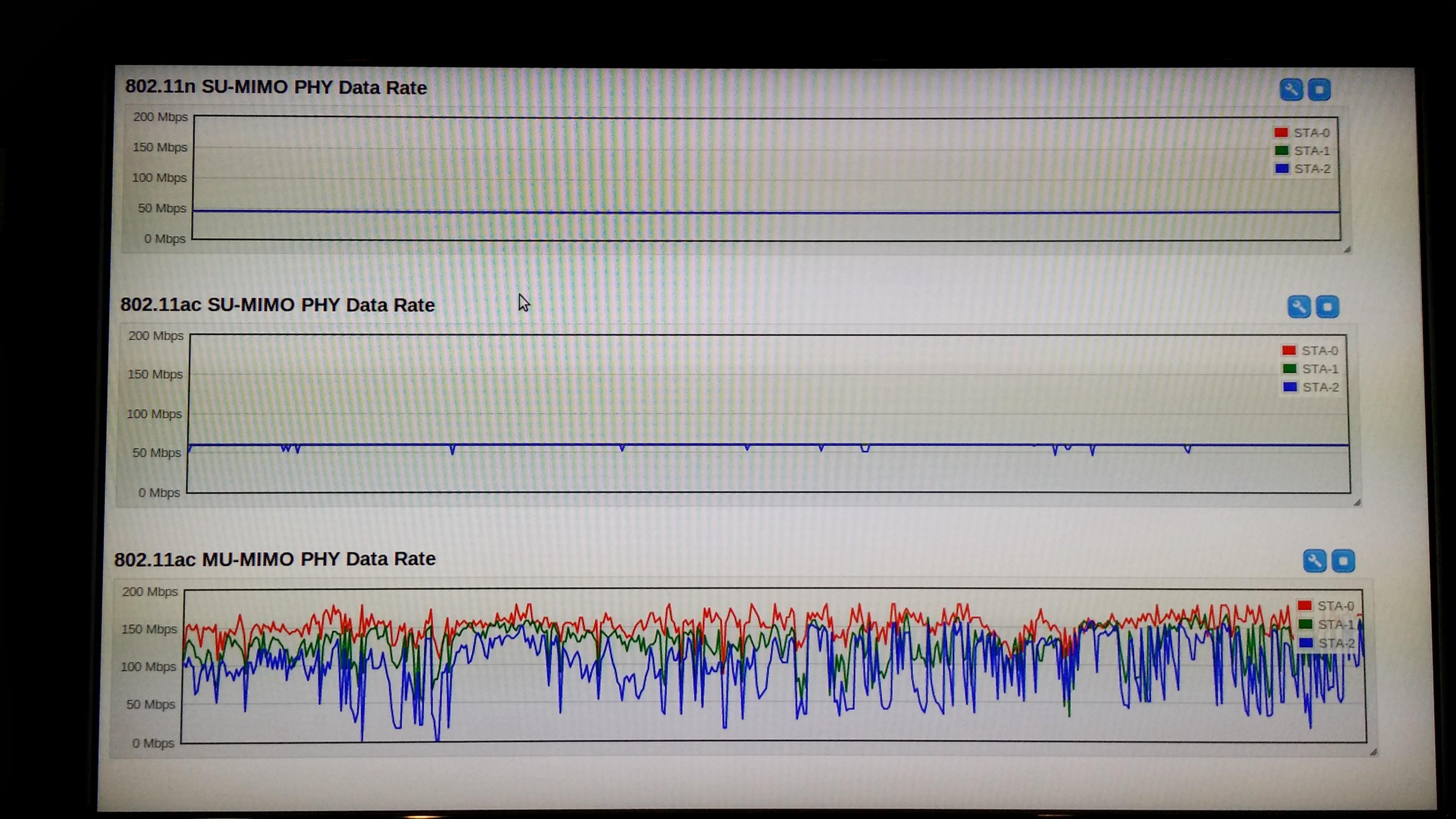 Starting at AC speeds where three devices would get around 117Mbps each (350Mbps/3 devices), using MU-MIMO, the speed would increase to around 303Mbps each (910Mbps/3 devices) per device compared to an “AC” SU-MIMO network. This is a 2.5X improvement for each of the three devices. Again, the cool part is that even non MU-MIMO devices benefit, as the airwaves are clearer for them to operate. Technically, the MU-MIMO devices are served faster as a group, leaving more time for the non-MU-MIMO devices to send/receive data. 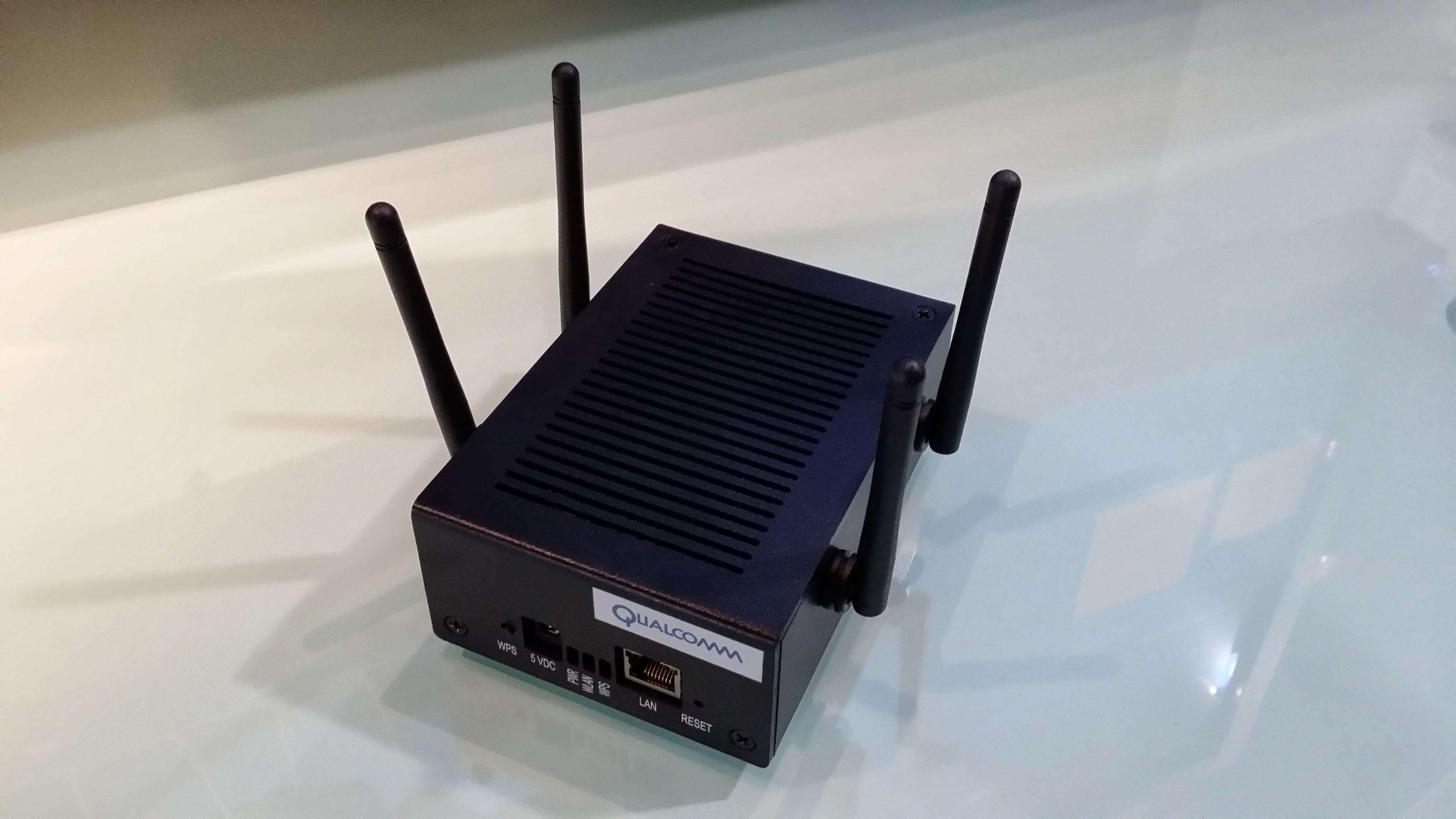 So what does all this techno-babble mean? Essentially, it means that by adding one feature to your next router and device, you could get up to a 2.5X (N) to 3.6X (AC with MU-MIMO) boost in speed with an MU-MIMO device. When you think of that in the context of other technologies you buy day-to-day, that’s impressive. In terms of real user improvement given you have a big, it all means getting your videos, files, and music faster and may even help with game latency and video quality as MU-MIMO improves true, effective speed and reduces latency.

So what about Broadcom’s new 5G Xtream technology? Essentially, it adds another radio to the existing platform, but uses the same technology they’ve been shipping for over a year. It does not support MU-MIMO, and was interestingly announced right after Qualcomm’s MU-MIMO launch, appearing a bit reactive. I look forward to third party reviews to compare MU-MIMO to Xtream, I will need to a bit more research on this and may do a follow-up.

Net-net, Qualcomm’s use of MU-MIMO in its WiFi silicon brings features to the table that make a real user difference and am looking forward to routers supporting this technology.

Additionally, I’ll be tracking MU-MIMO rollouts and will also be drilling into enterprise applications, too.