5G is a technology that many (including I) believe will be transformative above and beyond enabling 10X speeds on our smartphones, tablets, and PCs. 5G will be the key to accelerating productization of self-driving cars, stylish AR glasses, flexible and robotic factories, and even drones. I am currently attending Qualcomm’s 4G-5G Summit in Hong Kong to get the latest and greatest updates on where 5G really sits. Let me just say we are closer than anyone would imagine we would be five years ago, commercial deployments commencing in the first half of 2019.

The 4G-5G Summit is attended by over 2,500 people from 70 countries making 5G a reality, representing carriers, carrier equipment providers, smartphone OEM, and ODMs, and software providers from around the world. The event is the “last mile” of 5G deployment, where business deals happen between the carriers, distributor, OEM, ODM and software developer. This event is a decade after Qualcomm began orchestrating the industry on 5G research, academia, standards, and IP creation, governments, regulators, network and system simulations, and interoperability testing. Beyond the wireless industry, there are content providers like streaming media companies.

By orchestrating, I mean bringing the ecosystem together, moving it along at a rapid pace, identifying gaps, and aligning ways to fill those gaps. It also means providing a vision for what is possible from an end user and business point of view. 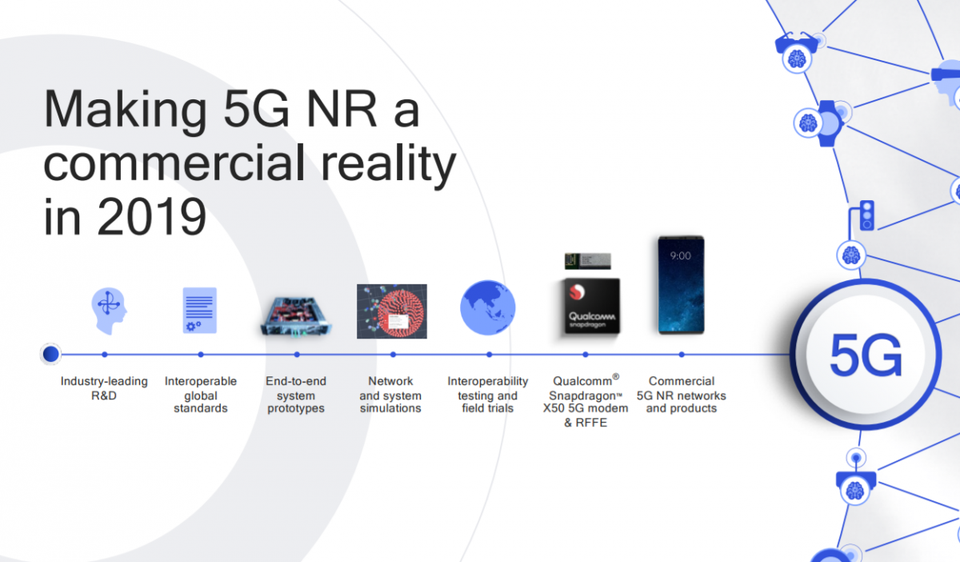 Qualcomm orchestrates most of the 5G industry (Qualcomm). QUALCOMM

A great example of Qualcomm’s 5G leadership and orchestration was Day 1 of the 4G-5G Summit, where the company set up 600 match-making events between carriers, smartphone OEM and ODM, distributors and software providers. In these meetings, the pieces required to be put in place are somewhat finalized. Agreements are made up and down the value chain in preparation for the 1H 2019 commercial launches around the world. One example could be ensuring a carrier who has an impending 5G rollout has the right smartphones with the right bands in the right volumes at the right times.

Does this 1H 2019 timeframe sound aggressive? It’s not. According to Qualcomm President Cristiano Amon, “every Qualcomm Android partner with flagship Android phones will have 5G NR phones in 2019.” Qualcomm’s partners include every leading Android handset on the planet.  In fact, Qualcomm is driving the 5G ecosystem forward with over 18 global carriers and over 20 handset and mobile hotspot OEMs and working with carrier equipment manufacturers Ericsson, Nokia, Samsung Electronics, Huawei Technologies, DT Mobile, and ZTE.

OEMs committed to Qualcomm 5G NR in 2019, including Google.   QUALCOMM

This kind of leadership and orchestration by Qualcomm is nothing new. It did the same for 2G CDMA, 3G (US, Korea, China, then Europe), 4G globally and now for 5G. It’s important, though, to recognize that 5G isn’t “done”. Release 15 is beginning to deploy and trials are happening on the road to commercialization, but there is a tremendous amount of work to do on finalizing it. Beyond the initial 5G deployment, there are many features in future releases that will impact the next ten years. For the next ten years of 5G, like there was for 4G, there is still significant work to be done on standards development, IP creation, network, and system simulations and interoperability testing. Beyond Release 15, Release 16 and 17 enable 5G NR for massive IoT, mission-critical services, car to car communications (C-V2X) and a new backhaul.  This will cost Qualcomm an extensive investment in time, people and resources and will be required to fulfill the complete 5G vision. 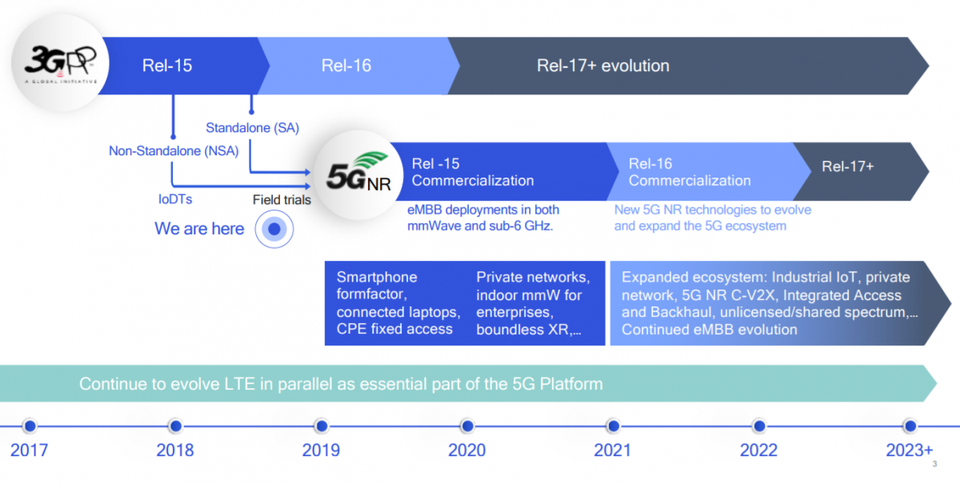 One thing that has been bugging me lately is Qualcomm’s motivation to do this and what could be the U.S. and other regulatory agencies and other companies’ desires to derail it. Qualcomm invests billions in R&D and industry orchestration. It monetizes this work by licensing its IP and selling its chips. If it becomes unprofitable to create IP and invest in creating ecosystems, it makes less sense that companies like Qualcomm have less motivation to do it.

I can make a case that if Qualcomm’s 5G motivations were to wane, the U.S.’s ability to lead the world in 5G wanes. Sure, there are other important, American companies engaged in 5G, but I believe none who can move the world as quickly and comprehensively and solve the biggest wireless problems as Qualcomm. There might be a handful of people who understand 5G modulation and I can argue most of them work for Qualcomm.

Qualcomm is orchestrating nearly every OEM, ODM, carrier, and equipment makers globally.  It has the first (and only) mobile 5G NR commercial platform, including the first commercial modem, transceiver, and mobile reference design, RF front end for initial 5G launches. These “firsts” enable carrier equipment manufacturers, carriers, OEMs, and ODMs to work their magic as quickly as possible. I can guarantee that if Qualcomm pulled the investment reigns back, 5G would slow down and the U.S. would most likely lose its global 5G advantage.

The duality of several US government agencies’ views on Qualcomm seems strange to me. On the one hand, CFIUS and the Administration view Qualcomm as a “national treasure” and key to driving US leadership in global 5G. On the other, the FTC seems bent on derailing Qualcomm’s 5G innovation engine by going after its IP business. Similarly, the ITC judge’s extraordinary (Initial Determination) recommendation to nothold Apple accountable for infringing Qualcomm’s IP could also potentially undermine Qualcomm’s IP business and 5G efforts.

If it was critical for the U.S. Government to not let Broadcom destroy the U.S.’s ability to lead in global 5G (by protecting Qualcomm), why then would the U.S. FTC and ITC subsequently jeopardize it by undermining Qualcomm?  The duality is odd, to say the least, and their objectives really need to get aligned.