Last week, much of the PC, server, and tablet electronics component, operating system and ODM world came together in Taiwan for Computex. Companies like Advanced Micro Devices, ARM Holdings, Intel, MediaTek Inc., Microsoft, NVIDIA and Qualcomm were all there on hand to take part in the festivities. I’m going to focus on Qualcomm’s presence there, which was substantial. Qualcomm is normally a very reserved company, but in an understandable move, Qualcomm spent a lot of their public Computex time doing direct competitive comparisons, specifically on the modem side of things. Qualcomm’s announcements at Computex were primarily around their new Wi-Fi chipsets and partner announcements, but they also called out their competitors on having sub-par LTE connectivity. They also talked in detail about markets like wearables and tablets where the company isn’t as dominant.

Qualcomm’s Computex activities were mostly surrounding their new MU-MIMO chipset announcements as well as attempting to extend their market share dominance of the LTE market with a partnership with AllWinner. In fact, Computex itself seemed like Qualcomm was trying to assert their dominance in everything wireless, be it Wi-Fi or LTE. During their press conference, Qualcomm showed a series of slides comparing themselves against competitors, A, B and C. Qualcomm was not shy about who these competitors were, but they avoided directly naming each competitor. I think MediaTek Inc. was “A”, Samsung “B” and Intel “C”, but I can’t say for sure. During their presentation, Qualcomm went as far as to claim that one of their competitors wasn’t even worth mentioning because they don’t really ship in any substantial amount of phones. I surmised that was a shot at Intel, even though they have made big strides with their 7160/7260 modem. 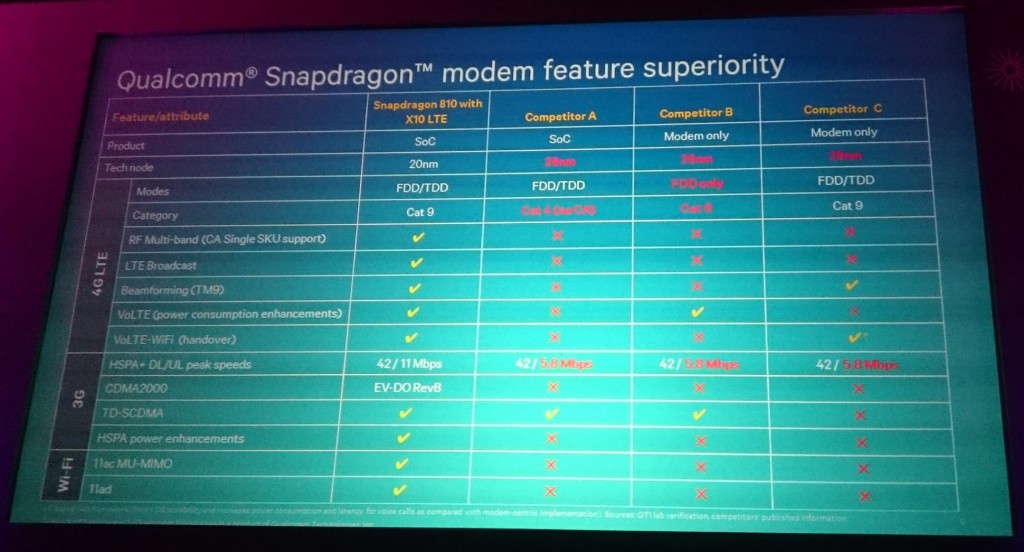 Qualcomm wanted to back up the claims in a live demo room with Rohde and Schwarz LTE and 3G test equipment next door showing different performance and power consumption when streaming HD video over different chipset makers. They did these comparisons over both 3G and 4G in order to show both Qualcomm’s potential customers (OEMs) and others in Asia, where LTE isn’t as ubiquitous that their 3G is also superior. This event was a clear show by Qualcomm that they wanted their OEM and ODM partners to understand that they were still the superior connectivity solution in both 3G and 4G and their advantages in 3G were actually even greater than in 4G. We did test a Qualcomm modem versus a Samsung modem and did see similar results. You can find our results here. We have not tested a MediaTek Inc. or Intel modem yet. 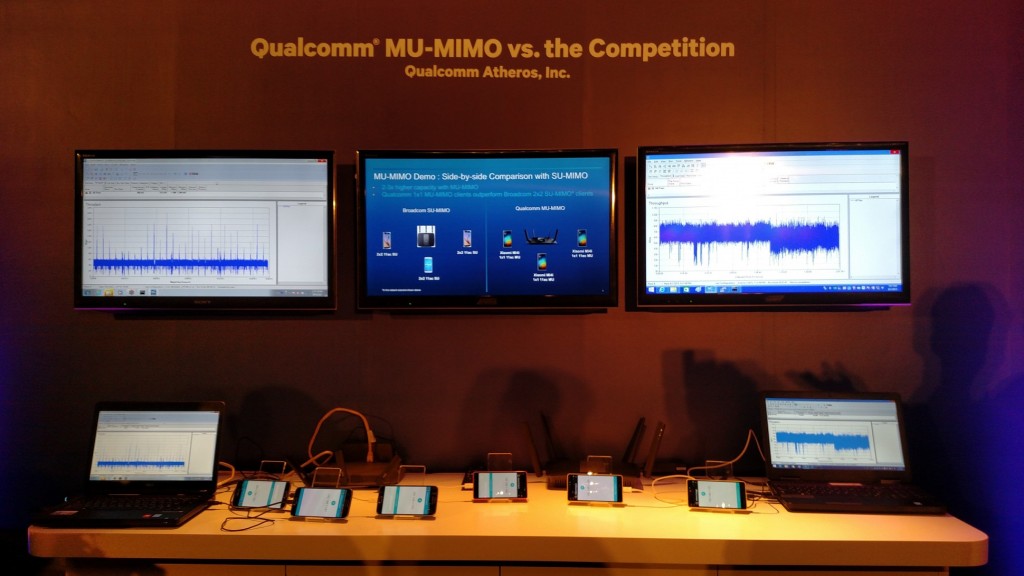 As part of the company’s three-pronged IoE (Internet of Everything) strategy which is really their IoT strategy, Qualcomm talked about their wearable strategy and how we are still in the fledging phase of the wearable industry. In a room full of analysts, there was arguably some hesitance to such statements, but the reality is that wearables really still are in their infancy and we are only starting to scratch the surface of what wearables can do in both consumer and the enterprise.

Qualcomm’s vision of the wearable industry is that people will ultimately have multiple wearables at the same time and that one of the biggest potential opportunities is in eye glasses where nearly 2 billion people wear glasses daily around the globe. Hard to buy into that given the Google Glass disaster that I personally experienced, but I can see a day when the capabilities are embedded in normal looking glasses. Other examples of wearable opportunities were given as kid watches, which aren’t as popular in the US, but are wildly popular in other regions of the world where there is less stigma.

Qualcomm also indicated that they are not interested in creating new chips specifically dedicated for the wearable opportunity. They believe that they have a broad enough spectrum of chips already within their portfolio to fit the different needs of different wearables. It remains to be seen if this is the right strategy when it comes to wearables, because after all, Qualcomm’s first wearable was an ARM Holdings Cortex-M3 and still had plenty of capabilities. Qualcomm did say that they learned a lot of lessons from their Toq watch and that those lessons are being applied today. That includes the 20+ wearables in 30 countries that they are already in today as well as the dozens more under development. However, wearables actually have a longer (18 month) development cycle than smartphones do, so seeing those come to realization will take longer than a smartphone.

There has been a lot of talk about how the tablet market has become saturated and opportunities for growth are limited. Qualcomm and their partners are talking about reversing the downward ASP trend and push tablets into a new era of functionality and usability. From what it seems, their two primary drivers of this are LTE connectivity and larger displays (over 10”). They want to find compelling reasons for why consumers would replace their current tablets. They believe these to be entertainment, productivity and a ‘connected experience’.

However, the problem with an ‘always connected’ 4G LTE experience is that in many areas, the carriers are still making it difficult to utilize a tablet in a way that doesn’t become a burden. Currently, going to a Verizon store, you have to pay $10 for monthly access in order to use the embedded 4G LTE functionality of any tablet you buy. That comes out to $120 a year in order to simply use data from a data bucket you are already paying for. This is better than the $30 a month plans that tablets used to have, but I do not believe that these prices are low enough to encourage LTE tablet usage unless the price of the tablet is subsidized. Realistically, most tablets are purchased outright, unlike phones, so people don’t want to incur additional monthly costs on something they’ve likely already paid $499+.

All of this neatly ties into Qualcomm’s announcement at Computex that they would be partnering with AllWinner in creating a platform that utilizes 4G LTE for tablets. AllWinner is a major player in the Chinese white label market and as a result, putting LTE into more tablets in such segments of the market could invariably increase ASPs and overall LTE tablet shipments.

Computex turned out to be an interesting one for Qualcomm watchers. The company really showed its teeth in their AllWinner announcement, showing their ambitions in the Chinese market. They also made their dominance in LTE and Wi-Fi wireless a key point and they weren’t afraid of naming and shaming their competition. This uncharacteristic behavior from Qualcomm may end up fueling even more competitive dialogue between the different SoC makers, and ultimately will result in more wars of words. Qualcomm also showed how they plan to expand further into existing markets that maybe haven’t been as strong for them, or are still growing, but their future in those markets remains to be seen. Right now, they clearly still rule the smartphone roost.