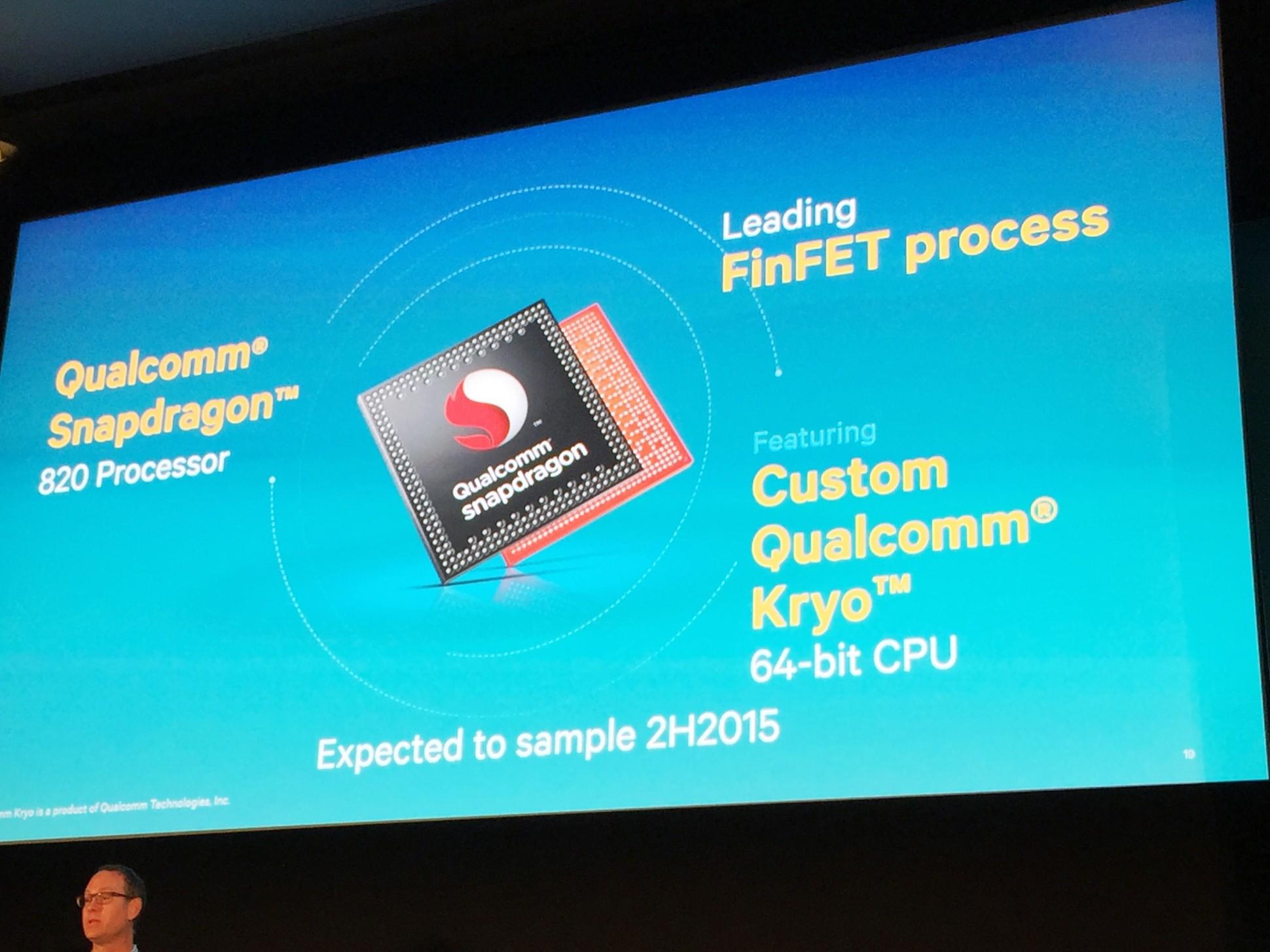 The Snapdragon 820 is being positioned by Qualcomm as the premium-tier smartphone SoC that will enable the best possible VR, photography and computer vision experiences in mobile. All of this will be backed by the backbone of the SoC, the CPU cores, which are once again a return to Qualcomm’s own custom design rather than something off-the-shelf from ARM. This means that Kryo will be a custom-built 64-bit architecture which is optimized for mobile, much like the previous CPU family which was called Krait. The last custom CPU that Qualcomm put in their SoCs was the 32-bit Krait 450 which sat in the Snapdragon 805, which if you believe it, will be 2 years old when the Snapdragon 820 arrives. Kryo will have 4 custom CPU cores. Not 8, not 10, but 4 cores. I’m glad to see Qualcomm heading back down the Apple A-Series route and a prior route where Qualcomm had seen most of its success on its 32-bit Snapdragons.

I wrote a paper entitled “Do 8 Cores Really matter In Smartphones” where we ran tests proving more CPU cores doesn’t necessarily provide a better smartphone experience or improve smartphone performance. You can find that paper here.

In fact, Qualcomm actually says that the Kryo CPU inside of the Snapdragon 820 is designed with heterogeneous computing in mind and is designed for peak performance and maximum power savings. With these claims come numbers, some pretty aggressive numbers. Qualcomm says that the Snapdragon 820 will not only be up to two times faster in CPU performance when compared to the Snapdragon 810, but that it will also be two times more power efficient as well. This will be a blessing to the many people that complained about the Snapdragon 810’s performance and thermal issues. A lot of this is thanks to the new CPU design, but some of it is also thanks to the shrink of the chip fabrication process from 20nm in the Snapdragon 810 to 14nm FinFET in the Snapdragon 820. While it isn’t official who Qualcomm is using for this fab process, it can almost surely be assumed to be Samsung. Samsung’s own Exynos 7420 is already a 14nm processor and Samsung has been shipping them in the millions inside of all their latest high-end phones. We have already seen the huge power and performance improvements that Samsung gained by going to 14nm, add that to Qualcomm’s new custom architecture designed for 14nm and you’ve got yourself a pretty powerful chip.

Part of the Snapdragon 820’s stated power savings also comes from the company’s new Symphony System Manager which is a new comprehensive SoC system manager and scheduler for all the different processors on the SoC. Qualcomm says this new Symphony System Manager will help the SoC’s different processors, CPU, GPU, DSP, ISP, etc. to work more closely together in ways that improve performance and reduce power. This includes efficiently scheduling tasks across all the different parts of the SoC to ensure maximum performance and power efficiency. Some of these benefits can come from deciding which loads belong best on which processor, which may have changed from the previous generation as virtually every component of the Snapdragon 820 has been improved upon from the last generation. Not to mention more API support for the Snapdragon 820 and improved efficiency may make it more reasonable to put certain tasks on the new Hexagon 680 DSP rather than on the CPU or GPU. Additionally, the new Adreno 530 GPU may be more appropriate for certain tasks like OpenCL compute than the CPU this generation and may prefer the GPU in those scenarios. Ultimately, the Symphony System Manager is Qualcomm reworking how their different heterogeneous processors work together in the SoC to improve performance and power consumption because they’re all so different from the previous generation.

For now, the Snapdragon 820 really looks like Qualcomm’s attempt to bring the company back to its days of greatness.

From everything we’ve seen on paper, it really does look like they’ve made quite the effort and are looking to reclaim the crown as the best SoC in the land, without any ifs ands or buts.

Since we won’t be seeing a Snapdragon 820 in a consumer device until Q1 2016, it remains difficult to evaluate now whether or not this chip will be a good one. All of the improvements that Qualcomm has disclosed thus far make it appear that they have a potentially successful chip on their hands and that some of the companies that may have shied away from their highest end chip this year might not do the same next year. It may also mean that we should see some really great phones from Qualcomm’s usual customers next year with significantly improved performance and battery life.