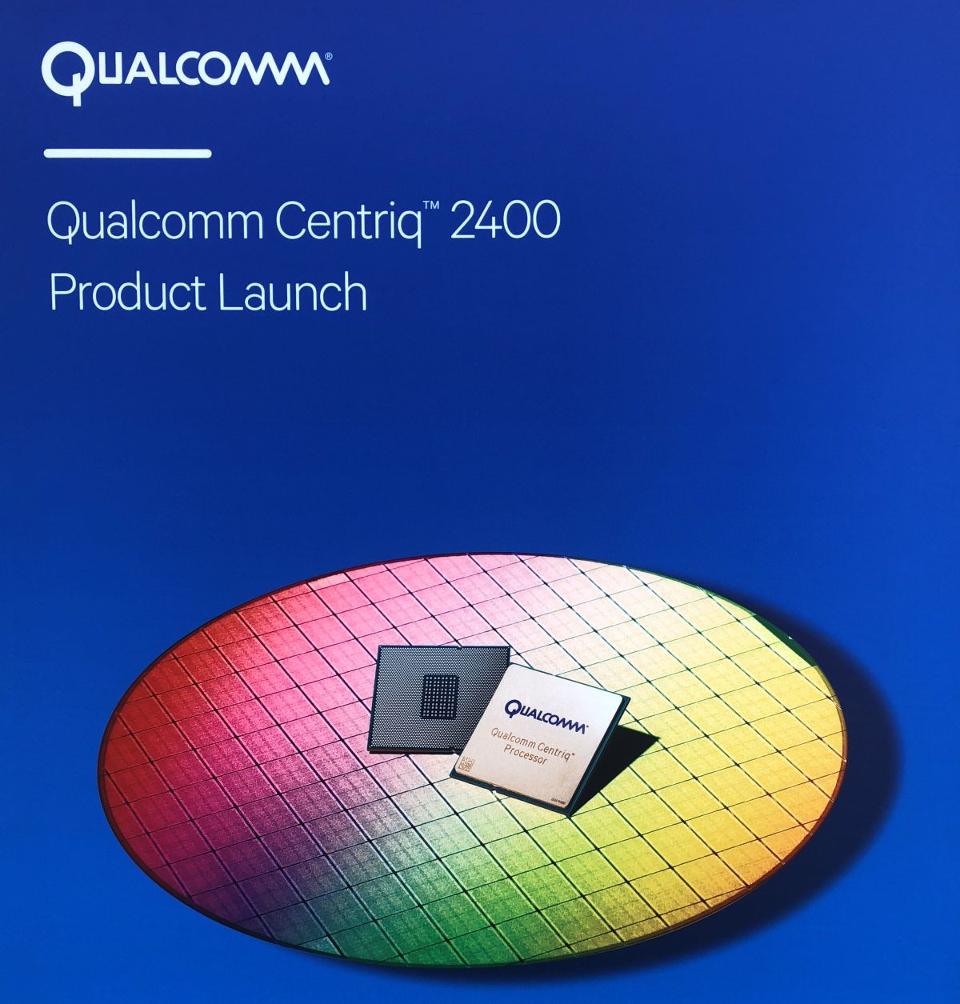 This week, Qualcomm officially jumped into the server chip market with the launch of its Centriq 2400 SoC (System on a Chip) in a server market that has seen a steady stream of product launches from Advanced Micro Devices  and Intel .  Though Qualcomm announced Centriq some time ago, this launch represents a significant shift in the industry as we see the first performant Arm based server chip. For years, the question has been “can Arm find a place in the datacenter?” Based on what Qualcomm delivered, I believe the answer is “yes.”

Centriq is Qualcomm ’s 48-core server processor comprised of 24 core pairs connected via a 250GB/s ring topology. This represents the highest number of cores per socket available in the server market. It was designed on the ARMv8 architecture to support scale-out datacenter architectures commonly seen in cloud environments.

The Centriq lineup will have three shipping SKUs:

Centriq lineup
Centriq will only support single socket server motherboard designs. Moreover, from the demonstrations shown at Qualcomm ’s launch event – it appears half-width “brick designs” are what the market can expect to see from hardware vendors. This would make sense as Qualcomm focused its entire event on demonstrating cloud affinity.
This is not your average Arm chip

Over the last five years, several Arm vendors have come and gone from the server market. Calxeda, Applied Micro, and even AMD attempted a run at the ARM market with its A1100 launch. Even Samsung made a run at the server space before pulling the plug before the product development was even complete. Perhaps most ironic was the failed Arm play from Broadcom with its “Vulcan” processor.

The reason why companies failed in the past came down to performance. Arm server chips just couldn’t match the performance of their x86 counterparts. Even in the low end of the market, Intel was able to stave off Arm with the position of Xeon D.

Things are different this time around. Qualcomm  claimed pretty impressive performance numbers during its launch event. When running SPECint_2006, the Centriq 2460 saw about 7% better performance than the Intel Purley Platinum 8160. Granted,  Qualcomm is comparing its 48 cores against 24 Skylake cores, but it is a competitive socket.

However, cloud providers do not just look at raw performance. “Price/performance” is a key measurement for success in the cloud as this articulates amount of productivity per dollar. This is where Centriq has a real story, claiming up to a 4x advantage over Purley.
Centriq is tailored for cloud environments

If it has not yet been obvious, Qualcomm is targeting cloud providers with Centriq. Not just Azure, Amazon.com , Google, Alibaba and the like, but also the tier two players who provide “as a Service” to consumers. This seems like a good fit for a few reasons:

One of the more impressive takeaways from the Centriq launch was the lineup of ecosystem partners demonstrating their wares on Centriq. NoSQL, Bioinformatics, video processing, AI, cloud infrastructure. There was a breadth of technology partners that spanned the entire ecosystem on display. Qualcomm was smart to recognize the importance of this robust ecosystem and smarter still to develop those relationships.

The key for Qualcomm  will be driving value from these partnerships in the Centriq ecosystem. What does this mean? Developing an understanding of where Centriq can win and working with partners to build the compelling evidence that can move a potential customer through the inertia of adopting an alternative architecture.

Centriq is not a match for every workload and every use case. For workloads that require high “per core” performance, look elsewhere. I do not expect to see an SAP HANA server reference architecture based on Centriq.

However, that is not where Qualcomm is aiming. Qualcomm has its sights set on cloud scale-out architectures – with an emphasis on scale out. They designed and built a CPU that should support those workloads that benefit from many, well-performing cores—highly threaded applications such as many big data and analytics distributions.

For Centriq to find success, there are a few things that have to happen:

Qualcomm has all the ingredients for success: a compelling part, a strong (and growing) ecosystem, and the right relationships with key customers. It will be exciting to watch how this disruption plays out in the market, but it is mandatory for Centriq to move far beyond its Arm predecessors.