At Computex 2015, Qualcomm and their partners made a series of major MU-MIMO Wi-Fi announcements on both the client and wireless AP (router) side. If you don’t know what this technology is, you can read up on it here. Qualcomm has been leading the industry MU-MIMO Wi-Fi charge with their own flavor known as MU|EFX. They started their MU-MIMO Wi-Fi push with commercial access points, where they’ve traditionally had the strongest market penetration and also have had penetration in consumer, too. With today’s announcements the company is making more strides forward in terms of client Wi-Fi connectivity. None of this can be good for Broadcom, who recently agree to be acquired by Avago Technologies, who has traditionally been strong in in the consumer Wi-Fi access point space and in iPhone WiFi. Qualcomm’s momentum appears to be growing in the client computing space and that may come at the cost of their competitors’ market share and profitability, but Broadcom has always shown to be a fierce competitor. And we have no idea what the combined Avago Technologies – Broadcom tie up will bring for a while.

Qualcomm’s market share strength in enterprise Wi-Fi and carrier capabilities drove them to deploy new, enterprise-friendly and industrial-grade technologies like MU-MIMO. As a result of that, Qualcomm has become the leader in this space and doesn’t appear to be slowing any time soon. This has cast some doubt on Broadcom’s future Wi-Fi leadership in the consumer space as Qualcomm has expanded their MU-MIMO scope beyond enterprise APs and really looked towards integrating MU-MIMO across all of their products. Broadcom’s branding for their latest generation of Wi-Fi chipsets also hasn’t helped them much either as they’ve been pushing 11AC as a ‘5G’ Wi-Fi technology. This has been seen unfortunately by some to be a disingenuous marketing ploy by the company to ride on the futuristic hopes and buzzwords of “5G wireless” technology.

Broadcom has released their own 4×4 MU-MIMO part called the BCM4366, but most of Broadcom’s customers are set-top box manufacturers and the occasional router manufacturer. In fact, the D-Link DIR-895L uses Broadcom’s chipset, but it isn’t an enterprise device as its considered a consumer gaming router. The situation is very similar for another one of Qualcomm’s biggest competitors, Quantenna, who has had some service provider success.

Qualcomm’s latest announcement at Computex involves two parts, the QCA9984 and QCA9994, which are chipsets for home routers and enterprise access points, respectively. These new chips bring enhanced MU-MIMO capability with support for up to four simultaneous streams. This is in contrast to the previous generation which could serve up to three streams at a time. These new chips also bring support for wider channels of up to 160 MHz and 80+80 MHz non-contiguous 11AC, which doubles the capacity over currently available 80 MHz channels. The QCA9994 for enterprise access points is also capable of supporting narrower channels of 5 and 10 MHz for public safety applications. Qualcomm’s new chipsets are also package compatible with the previous generation, which on a hardware design and manufacturing standpoint makes them relatively easy to transition to from existing Qualcomm-based products. 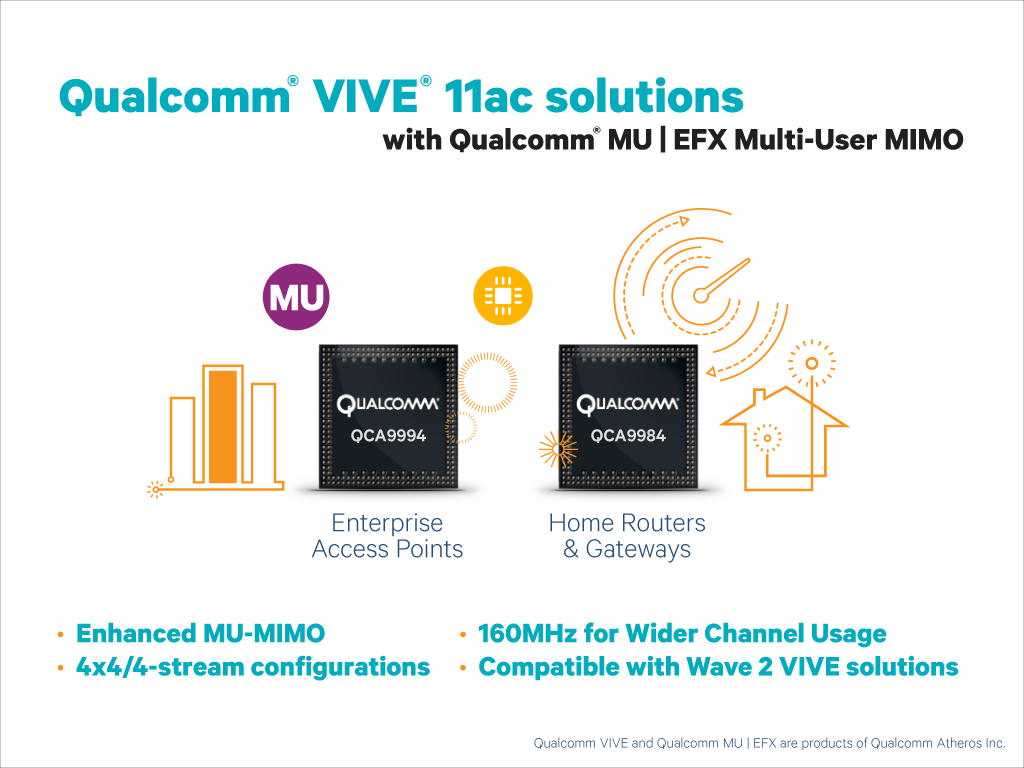 As mentioned earlier, these announcements are an evolution of Qualcomm’s already strong leadership in the MU-MIMO arena, especially pertaining to the enterprise access points. This includes Aruba, now a Hewlett-Packard company, who has the #2 market share rank in the enterprise. However, Qualcomm also has some designs in the consumer router space with brands like Linksys and Belkin that have openly said that all of their 11AC products will have MU-MIMO. They also have Netgear onboard as well as Amped Wireless coming out with their AC2600 router with MU-MIMO, which increases the company’s partnerships in consumer MU-MIMO.

Qualcomm’s success isn’t limited to enterprise access points and routers, as they also have been working with companies like Acer, Dell, Samsung, ZTE and Xiaomi on end point solutions which range from laptops all the way down to smartphones. These include Xiaomi’s critically acclaimed Mi note Pro and Mi4i, both of which are already in-market. That means that some manufacturers, if they use Qualcomm’s Wi-Fi, it could enable certain features purely through firmware updates, giving products more longevity and giving users added value.

Qualcomm is taking this year’s Computex to reassert their dominance in MU-MIMO, especially in the enterprise space with a growing consumer presence. Qualcomm isn’t simply satisfied with their current lead in enterprise MU-MIMO, as they’re continuing to improve upon their offerings there while also expanding into the endpoint market. Qualcomm’s push into endpoint MU-MIMO Wi-Fi stands to further hurt Broadcom in a business that they’ve traditionally been very successful in. Qualcomm’s overall leadership with MU-MIMO has helped the company transition itself into a more relevant player in the Wi-Fi space, as traditionally happens with major technology inflection points like with 11AC and MU-MIMO. The push to 5 GHz WiFi with 11AC and MU-MIMO will vastly improve users’ Wi-Fi experience while also increasing the capacity of networks and Qualcomm seems very well positioned to provide the solutions to enable those improvements.