The Pebble watch started as a Kickstarter project  that exceeded their $100K funding goal by over $10M over a year ago in May, 2012.  The watch is currently shipping directly from Pebble and you can also buy it at Best Buy 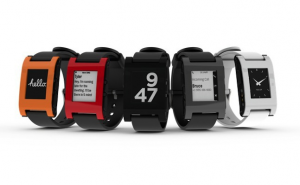 for $149.99.  Pebble supports basic peer-to-peer functionality for Android and iOS phones and sports a low res e-ink style display. Built into the core Pebble OS, it supports notifications for calls, texts, calendar events, email, Google Talk, and Facebook notifications.  So basically, whenever your phone gets a notification, Pebble gets one.  Through 3rd party apps I installed, I could control my phone’s music player, extend RunKeeper, see Twitter and Facebook feeds, see the weather, view photos, view calendar, page my phone, and respond to texts.  Sounds robust and valuable, right? Well, not really.  The best way to go through the experience is discuss highs and lows.

Pebble right now is a classic “tweener”.  Let’s look at fitness devices as an example.  Pebble is not like a FitBit One, FitBit Flex or Jawbone UP that tracks sleep, movement, calories yet inexpensive, stylish or easy to hide. Nor is it like the $249 MotoActv that has a color display, heart rate monitor, embedded GPS tracker and built-in music player.  Pebble is smack dab in the middle of the devices while trying to get developers to do more. A tweener is never a good place to stay for long as it usually ends in death.

Pebble needs to be more “general purpose” like a phone, tablet, PC or more “focused” like a sports watch or game console.  To do this, I believe Pebble will need to change dramatically. To go more “general purpose”, Pebble needs a complete overhaul in UI that would enable a lot more input functionality via, let’s say, voice.  Even with added features, it would take a lot to get over the “nerd factor”.  I could see non-nerds getting comfortable with Pebble functionality if it somehow embedded into their favorite Omega, Breitling, TAG Heuer, Citizen, or Burberry watches.

To get more “focused” Pebble needs to identify a unique problem for a unique audience that only it can solve…. and then go solve it.  I could see a customized “Pebble-like” device solving some very unique living room gaming challenges with a multi-axis (more than 3) accelerometer.  I could see specialty watches for firefighters and policemen, too.  The list goes on and on, but unfortunately, this is just not what Pebble is.

Until Pebble and other devices like Pebble are semi-concealable or get more focused on solving focused problems, it will remain the nerd’s watch.  The world needs and loves nerds, but I don’t think it’s a very large market in the near future.