Many different PC vendors announced new systems at CES 2017, with some launching entirely new lines of PC gaming hardware. Companies like Lenovo and Samsung Electronics launched new brands for their gaming notebooks, while others like Dell and Hewlett-Packard introduced new products and updated existing ones that had just been introduced late last year. With the introduction of the new Intel 7th Gen Core processors, many vendors are refreshing some of their still relatively new gaming laptops and introducing new ones as well. Many of them also support virtual reality (VR) natively with their GPU offerings, giving gamers more value and growing the market for PC VR.

At CES 2017, Lenovo showed off their new brand of gaming products, named Lenovo Legion. They are introducing two new 15.6” laptops with eSports and PC gaming in mind. These laptops, the Legion Y520 and the Y720 are based on the new Intel 7th Gen Core architecture and feature NVIDIA’s latest GTX 10 Series of graphics chips. The Legion Y750 will feature a 4K display and NVIDIA GTX 1060 GPU and cost $1399 and will debut in February, while the Y520 will come with a 1080p display and NVIDIA GTX 1050 and come in at a much lower $899 price point. This is very important because lots of laptop manufacturers are starting to address the lower-end of the PC gaming market thanks to lower-cost high performance graphics chips from Advanced Micro Devices (AMD) and NVIDIA. This is enabling real gaming experiences from the biggest PC OEMs that come in well under $1000.

Dell announced their new Dell Inspiron 15 gaming laptop at CES 2017. This laptop features dedicated cooling solutions to allow for better sustained gaming performance while using the 7th Gen Intel core processors paired with NVIDIA’s GeForce GTX 1050 or GTX 1050 Ti GPUs. Dell is also including a 1080p like Lenovo’s Y520. Dell equipped this Inspiron 15 gaming laptop with a 74 Watt hour (Wh) battery, which should allow for some long gaming sessions or just extended browsing. Dell made this laptop available starting January 5th starting $799. Dell has also updated their Alienware 13, 15 and 17 notebooks. They’ve added 99 Wh batteries for their 15 and 17” laptops as well as are offering less-expensive GTX 1050 and 1050 Ti GPU options on them as well which bring them down to $1199 and $1299. They’re also upgrading their desktop, the Aurora R5, which I recently reviewed to the new 7th Gen Core processors as well. 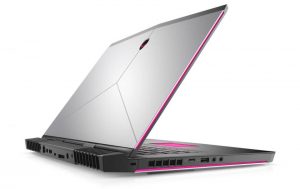 In addition to Lenovo and Dell, Samsung introduced their first ever gaming line of notebooks at CES, the Odyssey gaming notebooks. Samsung is launching with 15 and 17 inch versions of the notebook and feature Intel’s 7th Gen Core processors paired with NVIDIA’s 10-Series of graphics chips. Both models come with DDR4 RAM and PCIe SSDs, which are a nod to the company’s memory leadership. The design ID of Samsung’s new Odyssey laptops sits somewhere between HP’s Omen and Razer’s Blade line of notebooks. The biggest problem for Samsung’s gaming offerings is that they don’t have a gaming pedigree among the PC gaming audience to command a premium and that their notebooks are priced at a starting price of $1,199. I hope that Samsung can reconfigure their marketing or positioning, because a lot of gamers are going to look at their prices and specs and have a hard time understanding.

While HP didn’t announce any new gaming PCs or notebooks, the company did announce their new 35” curved gaming monitor with the Omen X 35. This monitor features a 21:9 aspect ratio and a 3440×1440 resolution which is spread across the curved 35.03-inch display. This monitor also features a 100Hz refresh rate and supports NVIDIA’s G-Sync panel self-refresh technology for smoother gaming and less judder.

Razer was also at CES 2017 and showed off two concept products, codenamed Project Ariana and Project Valerie. Project Ariana is the company’s gaming projector, which projects over a TV to create a more immersive gaming experience. Project Valerie is the company’s three-display gaming laptop which somehow packs three displays into a single laptop form factor. This prototype was made famous internationally in the last day of CES after it was reported that two of the prototypes were stolen from the show floor. While it remains to be seen if either prototype ever makes it to production, they still offer innovative new products for the PC gaming market.

Finally, Acer introduced three new gaming notebooks, the Aspire V Nitro Black Edition, and the Aspire VX 15 and 17. They also upgraded some of their existing notebooks like the Predator 17X with Windows 10 and 7th Gen Core processors from Intel as well as NVIDIA’s GeForce GTX 10 Series. The most interesting of the Acer offerings that hadn’t already been announced was the Aspire VX 15 notebook, because it offers a competitive product to Dell’s Inspiron 15 for the same starting price of $799. Acer is also finally offering their Predator 21X gaming notebook that they first showed off at IFA 2016 for $8999. It features a 21” curved display, dual GTX 1080 graphics chips and a fully mechanical gaming keyboard.

CES 2017 was a good sign of the health of the PC gaming industry. While the PC market continues to struggle in places, PC gaming continues to show strength. The commitment to new products and the introduction of new product lines with better designs and new features illustrate how much the market has grown since a few years ago. Previously, PC gaming was only a few small boutique and OEM builders, but today it’s become mainstream and CES 2017 has illustrated that. It’s also good that there is now a healthy spectrum of performance and price options in the PC gaming market and that there are now a plethora of systems that also support VR from virtually every OEM.