The OpenPOWER Foundation, a collection of companies that have coalesced around IBM’s POWER architecture recently had their OpenPOWER Summit in San Jose, California. OpenPOWER was founded by IBM, Google, Tyan and Mellanox to coalesce around IBM’s approach towards opening up the POWER architecture to anyone that wishes to license it or build their IP into it. IBM provided the CPU, memory and accelerator architecture and all of the other founding members provided some other component of HPC that was needed to create a complete solution. IBM holds their OpenPOWER Summit every year in San Jose California alongside their partner NVIDIA in the same convention center with some overlap between the two. The OpenPOWER Foundation keeps making progress, year after year, and at this year’s OpenPOWER Summit, they moved even more steps closer to the deployment of complete OpenPOWER systems. IBM, Google, Rackspace (Rackspace Hosting) and others offered even more support, products and R&D towards the cause. 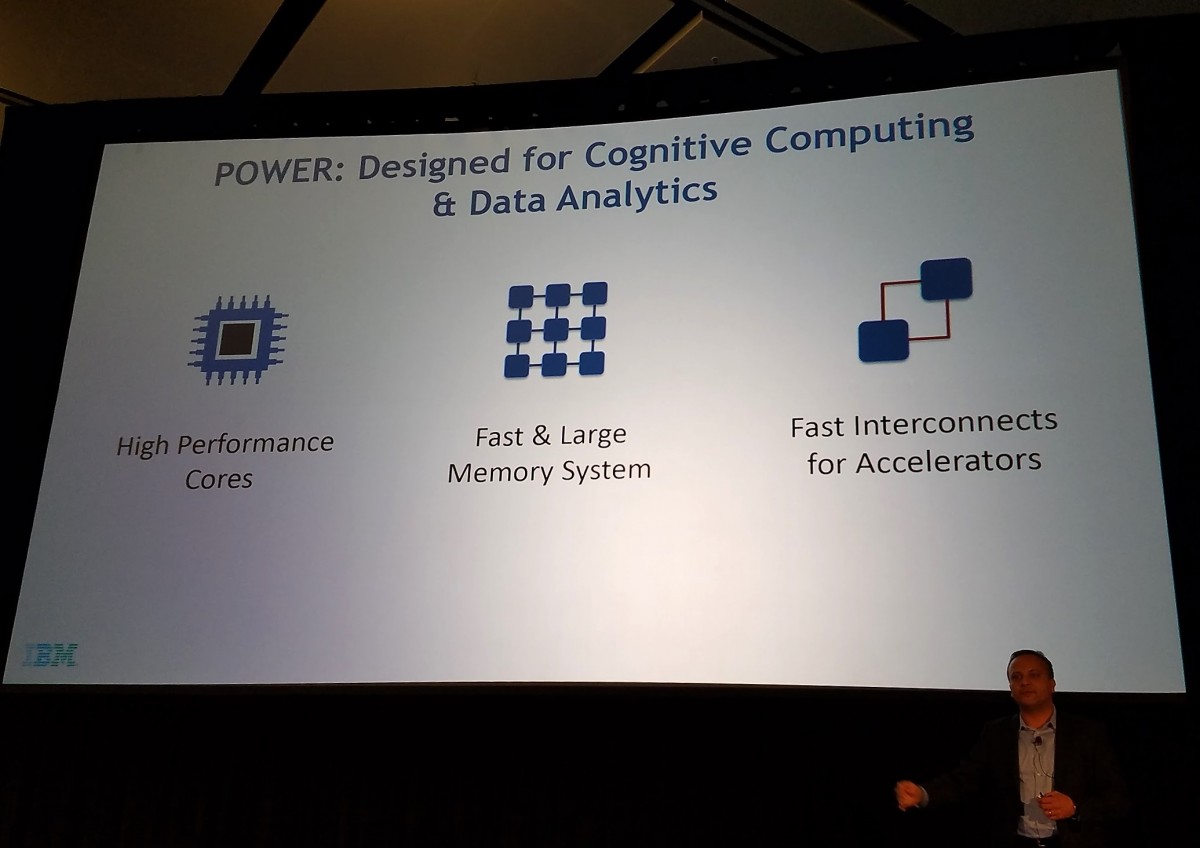 At this year’s OpenPOWER Summit, one of the biggest moves forward came from Google in terms of an increased commitment and involvement compared to previous years. Google had previously announced motherboards using OpenPOWER and that they would port software. This year they announced that this porting was nearly complete with a “majority” ported to date. However, Google would not commit to deploying these systems en masse. Google’s decision on what compute they decide to use in their datacenter is purely based upon what Google’s Maira Mahony calls, “performance per TCO dollar.” According to Mahoney, for many of Google’s employees enabling POWER systems is merely a configuration change and doesn’t put too much of a burden on them to change. 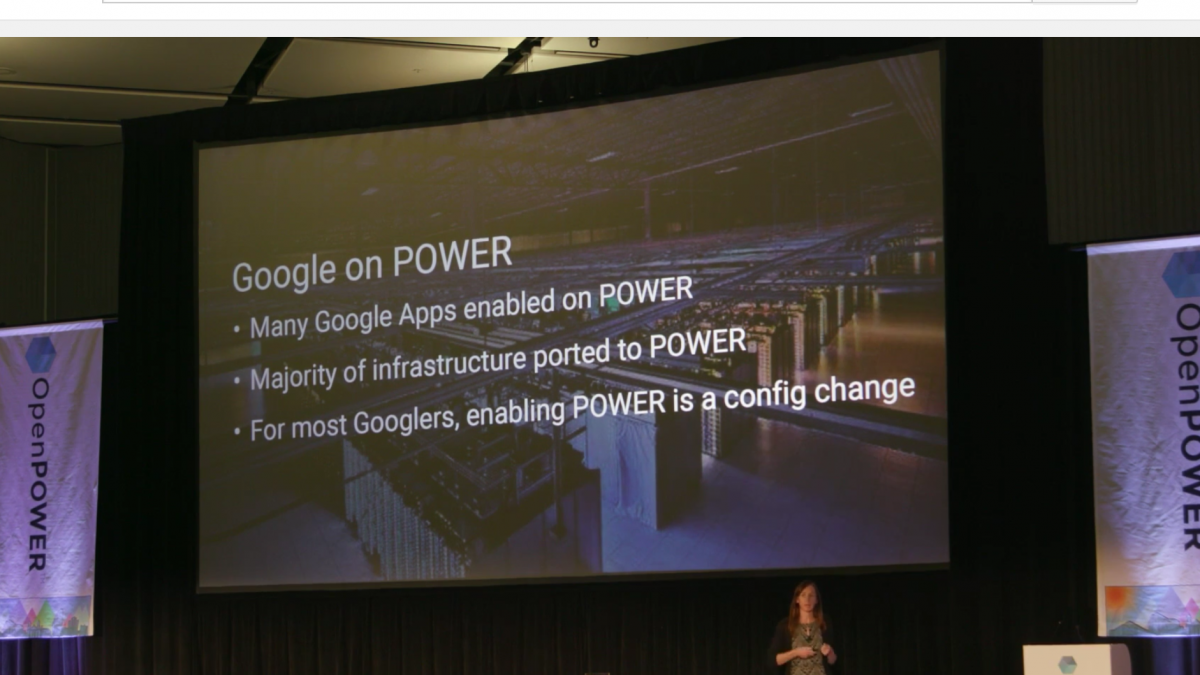 Google’s Maira Mahony talks through what they have accomplished with OpenPOWER (Credit: YouTube)

Google also announced that they are developing a next-generation OpenPOWER and Open Compute Project form factor server. Google is working with Rackspace to co-develop an open server specification based on the new IBM POWER9 architecture and the two companies will submit a candidate server design to the Open Compute Project.

It’s not in Google’s best interest to do full deployment commit as it gives them better negotiation leverage with both Intel and OpenPOWER members.

This progress shows how many companies are working together to make OpenPOWER work in more than just a theoretical capacity, but in a truly competitive manner that could give the competition a run for their money. Rackspace’s own manage cloud computing platform could really stand to benefit from the increased performance from the OpenPOWER platform and added acceleration from a whole host of accelerators, be their CAPI-based accelerators or NVIDIA accelerators using NVLink. More performance per dollar could be better for a company like Rackspace who wants to deliver the best performance per dollar to their customers.

Added support from Google and Rackspace is extremely valuable to OpenPOWER but IBM’s contributions have been the most critical to OpenPOWER’s success since its founding. IBM, in collaboration with NVIDIA and Wistron, plans to release its second-generation of OpenPOWER HPC server, which includes NVIDIA’s Tesla P100 compute co-processors and NVLink interconnects as well as IBM’s POWER8 processors connected directly through NVLink. These systems will be available in Q4 2016. IBM also announced that they plan to add systems to their line of LC servers. IBM is planning on adding Open Compute Project-compliant systems to their POWER Systems LC portfolio for cognitive and big data applications. IBM’s plans are in addition to three other OpenPOWER Foundation members also announcing that they have plans for Open POWER-based Open Computer Project-complaint systems like Mark III Systems, Penguin Computing and Stack Velocity.

In addition to the increased involvement from some of OpenPOWER’s biggest members, there were 50 new OpenPOWER infrastructure announcements from a broad range of members and partners. Bittware, IBM, Mellanox and Xilinx announced more than a dozen new Coherent Accelerator Processor Interface (CAPI) solutions. Alpha Data unveiled a new Xilinix-based FPGA CAPI hardware card at the summit as well. Edico’s DRAGEN processor which was developed in collaboration with Xilinx and IBM is based on Xilinx’s FPGA running on IBM’s POWER Systems LC class. Supermicro is also currently developing two new POWER-based servers for IBM which are based on the company’s ‘Ultra’ architecture and IBM intends to add them to their LC server line. Last but not least was Tyan, who announced their own POWER8-based server solution that is designed to fit into a 1U formfactor with planned availability in April, 2016.

The OpenPOWER Foundation and their members have shown once again that the movement that OpenPOWER is continuing to gain steam and in many respects has eclipsed the ARM-based server initiative. The increased commitment from Google, Rackspace Hosting, IBM, NVIDIA and others clearly show that OpenPOWER is here to stay and that we are really starting to get close to a complete ecosystem built around OpenPOWER.

More announced products are showing that companies are investing real money into developing products that they think will actually sell and not just for experimental purposes. Rackspace Hosting has said they will deploy their solutions into production, while Google hasn’t said they would but also hasn’t said that they wouldn’t and if the “percentage per TCO dollar” is better than Intel, then they say they will. Intel has many levers to pull, though and are masters at this game and don’t assume that any of this is “all or nothing”.

Things are really starting to get interesting for OpenPOWER and it will be interesting to see what further announcements we’ll see throughout the year.