NVIDIA has been working hard to progress forward their new Pascal family of GPUs ever since their announcement at Dreamhack in May 2016 in my hometown, Austin, TX. The announcement included two of NVIDIA’s newest GPUs, the GTX 1080 and GTX 1070, both of which are somewhat available now. I worked with my colleague, Anshel Sag, to review the GTX 1080 and found it to be a fantastic GPU both in terms of performance and enthusiast value at that time. However, there were many software features announced along with the new Pascal family of GeForce GTX GPUs that hadn’t quite been ready yet but were major capabilities that elevated the GeForce GTX family. I thought those software capabilities deserved some extra attention and is important to me as any company who can get solution stickiness versus hardware progress becomes more important to the ecosystem. This is true for any tech product and solution. I also want to comment on the GTX 1060, NVIDIA’s latest card, priced from $249-299.

Some of these new Pascal-enabled features are non-performance-focused like NVIDIA Ansel (not to be confused with Anshel) which allows for a new way of taking and viewing in-game screenshots. Ansel will finally be released by NVIDIA with support for Mirror’s Edge and The Witcher 3 in mid-July. 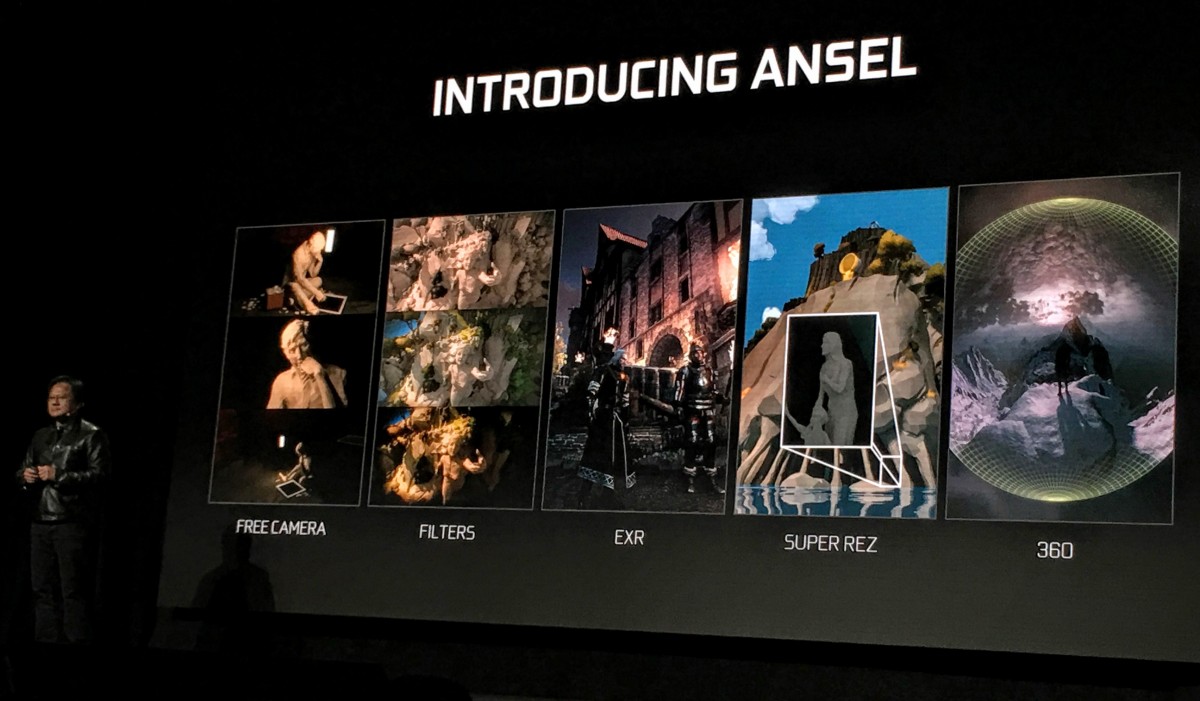 In addition to software like Ansel, NVIDIA is overhauling their Gameworks program to include VRWorks to accelerate and improve the experiences inside of VR utilizing the strengths of Pascal and NVIDIA drivers. While there are many technologies that are a part of Gameworks and VRWorks, the most important ones to improving the VR experience on NVIDIA hardware are Simultaneous Multi-projection, ray traced audio and PhysX. These technologies are designed to improve the overall experience in VR either through improved performance or added realism.

NVIDIA has actually created a full featured game that also serves as a technology demo called VR Fun House that they showed at their Pascal launch and subsequent events like E3. NVIDIA also announced that the VR Fun House will be coming to Steam this July, which means that anyone can play around with this carnival-style experience. This demo utilizes many of NVIDIA’s technologies including PhysX to add realism to VR and improve the overall experience with fluid dynamics, fabric physics and turbulence. 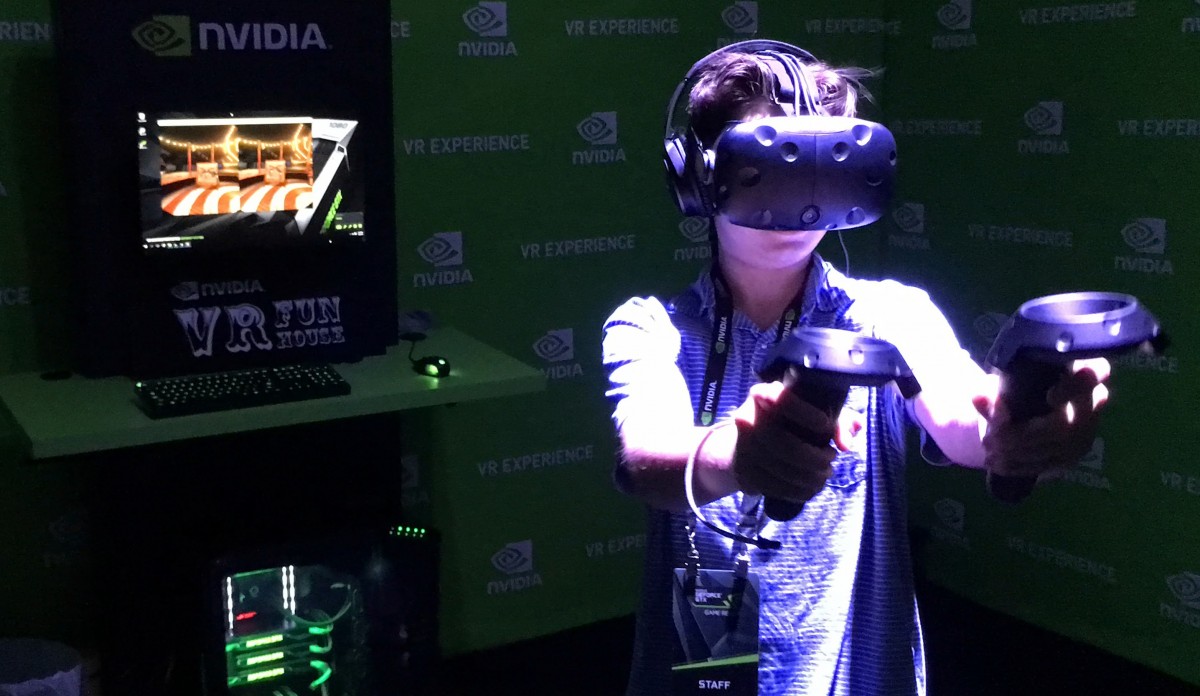 Speaking of turbulence, I was completely blown away by the Everest VR experience that NVIDIA had worked with Solfar Studios to create. In part of that experience, Solfar Studios utilizes PhysX at the peak of Mt. Everest to make the snow swirl around you and wind blow by you in a way that can only be described as breath taking. There is definitely something game-changing there, I wasn’t convinced of it until I tried the final build of the Everest VR experience. 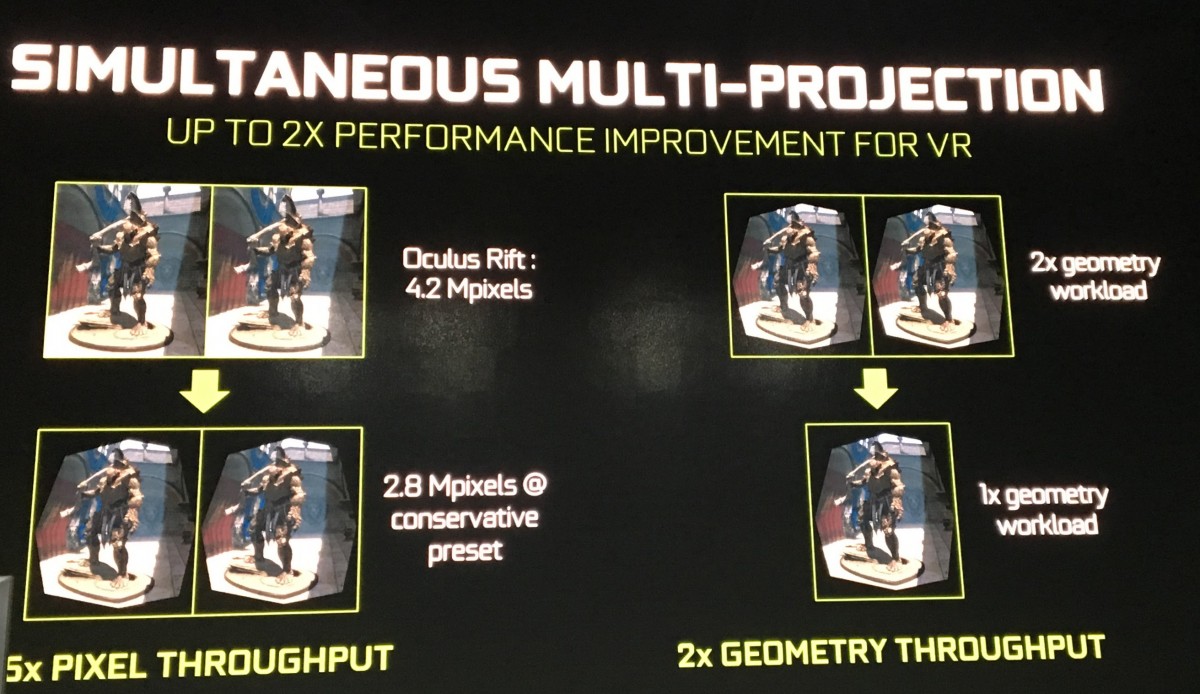 This means that developers don’t have to do as much work to implement simultaneous multi-projection because it will already be at the engine level. This also means that many more games will support this feature than I had originally anticipated, because traditionally certain NVIDIA-only features are implemented on a case by case basis. NVIDIA has already announced that they already have 30 games that will support simultaneous multi-projection including games like Pool Nation VR, Everest VR, Unreal Tournament, Raw Data, Adr1ft and Obduction.

NVIDIA has claimed to increase their VR performance by 50% or more with simultaneous multi-projection, which could vastly improve the performance of NVIDIA GPUs in VR regardless of the model.

This leads us into NVIDIA’s latest announcement, the GeForce GTX 1060. Third-party, independent benchmarks are not available yet and NVIDIA claims that the GTX 1060 delivers GTX 980 performance at $249 or less than half the price of the 980 at launch, and will be available July 19th. This is virtually unheard of when you consider that the GTX 1060 is only one generation newer than the GTX 980 and less than half the price and just as fast. The GTX 1060 is slated to replace the GTX 960 which initially launched at $199, but also comes with half the performance in most cases and has more RAM than the 960, 970 or 980. This is obviously thanks to the Pascal architecture which also enables the GTX 1070 and 1080 to be as fast as they are.

The GTX 1060 features a new GP-106 ASIC (applications specific integrated circuit) from NVIDIA which is different from the GP-104 in the GTX 1080 and GTX 1070. This isn’t a cut-down die. This means that NVIDIA has purposely built this ASIC for the middle of the market and that it should yield fairly well. This also means that it should be even more optimized for low power gaming which explains the extremely low, stated 120W TDP and single 6-pin power connector compared to the 165W GTX 980. The graphics card itself will ship with 6GB of 8Gbps memory, which from my and Anshel’s experience should be enough for most gaming experiences and helps NVIDIA and their board partners keep down costs compared to 1070 and 1080. Additionally, NVIDIA told me that the GTX 1060, unlike the 1070 and 1080 will mostly ship in custom board partner designs and that the NVIDIA Founders’ Edition will be only available on NVIDIA.com at $299 for those that want it. If they can deliver the GTX 1060 in meaningful quantities, then Advanced Micro Devices just launched RX 480 has a very real competitor in a few weeks and that ultimately means great things for the consumer.

As a whole, NVIDIA has done a very good job of catching up on their position inside of VR and have committed themselves immensely to improving VR. A lot of this has to do with the platform that NVIDIA is creating inside of VRWorks that enables NVIDIA’s GPUs to excel in truly immersive VR experiences like Everest VR. While it remains to be seen how many of the features outside of simultaneous multi-projection and Ansel get adopted by game developers, NVIDIA has done a very good job of introducing their new hardware and software products.

While there may still be some supply issues with the GTX 1070 and 1080, NVIDIA has reassured us that the GTX 1080 is the fastest ramp of a flagship GPU they have ever had and that demand is just that immense. It remains to be seen how well they can keep up with demand for the GTX 1060, but I suspect that most supply issues will be resolved by the end of the quarter regardless. I’m stunned, yes, stunned, at just how quickly NVIDIA got the GTX 1060 ready and I believe they accelerated the timetable when they fully realized the price/positioning of Advanced Micro Devices RX 480.  Who wins? The GTX 1060 isn’t available yet nor are third party, independent benchmarks available on it, but for sure, the consumer wins as we have a fistfight in the mid-range.

NVIDIA has presented a very strong line-up of new GPUs that range from $699 to $249 and supported it with a broad array of new software, features and capabilities as well.