Over the last few CES trade shows, Nvidia’s CES keynotes have been primarily about tablets and phones with a taste of automotive. Last night, Nvidia took a slightly different approach and announced their newest Tegra mobile chip, the Tegra X1, with a focus on automotive. There’s no doubt the end game for Nvidia in automotive is to dominate self-driving cars, but they know they need to add value in the interim, because mainstream autonomous driving is still a ways down the road. Also, keep in mind that the lack of mobile content shouldn’t be construed as a lack of interest in mobility as I think Nvidia is just saving that up for Mobile World Congress in March. So let’s get under the Tegra X1 hood.

The Tegra X1 features Nvidia’s latest GPU architecture, significantly reducing the release delay between mobile and dedicated GPUs. The Tegra X1 has Nvidia’s Maxwell GPU, which recently was released as a high performance desktop part in the Geforce GTX 980.

The Tegra X1′s Maxwell GPU features 256 cores, which is an upgrade from the 192 of the Tegra K1. It also brings significant improvements to efficiency and performance per watt. As a result, Maxwell promises to give the Tegra X1 a similar performance bump in terms of performance that the GTX 980 gave over the GTX 680, essentially double performance in many scenarios. I did get confirmation that the benchmarks that Nvidia showed were run on a platform between 4-5 watts without active cooling. The Tegra X1′s GPU is so much faster than the Tegra K1′s and delivers over 1 Terflop of compute performance. 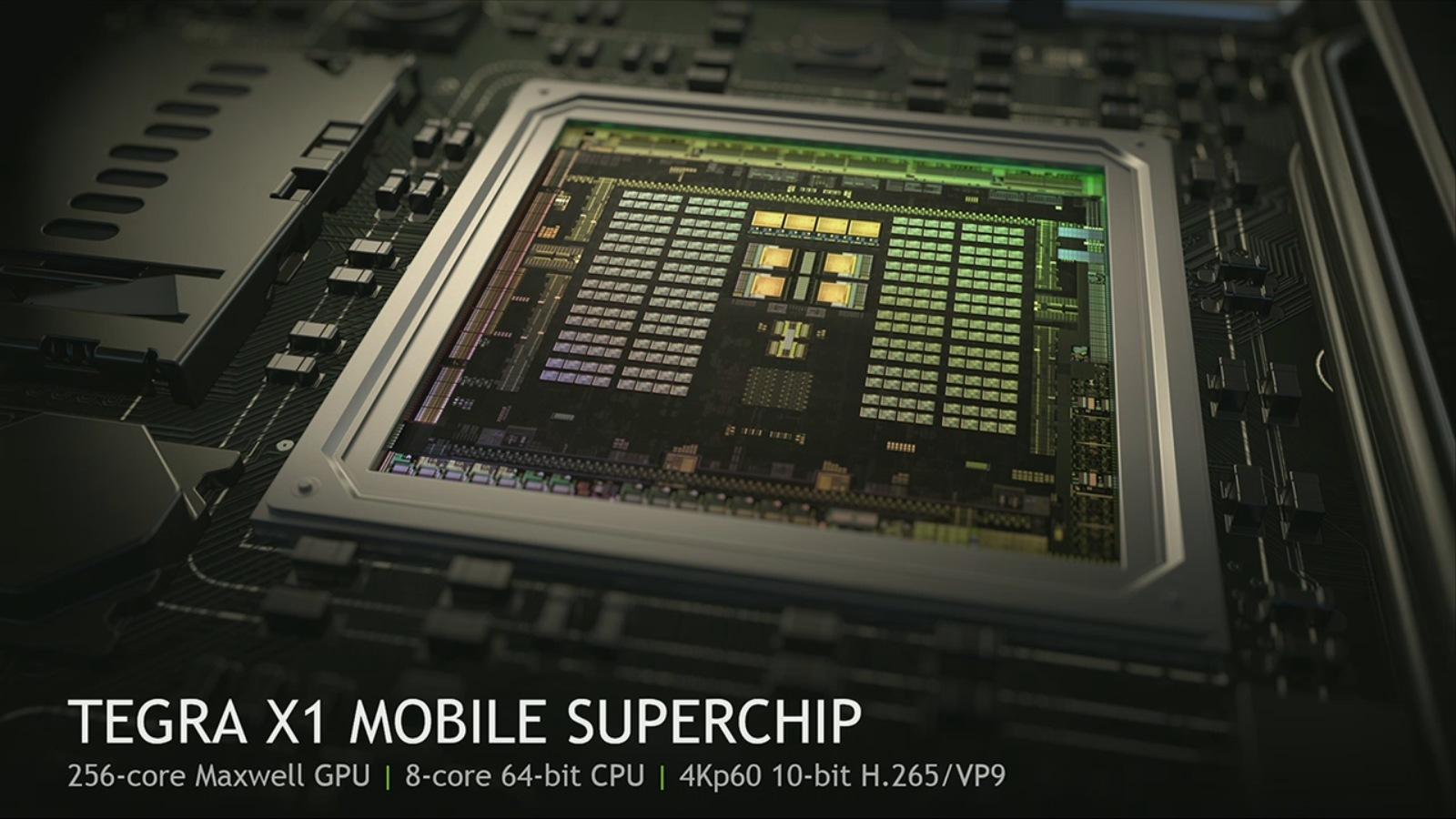 Because the Tegra X1′s GPU originates from dedicated graphics solutions it has all the support for desktop graphics APIs like OpenGL 4.5, DX12 and CUDA 6.0. All of these performance improvements are still accomplished while still being constrained within the 4-5w power envelope that most tablets demand.

In addition to one of the worlds fastest mobile GPUs, the Tegra X1 also has an interesting CPU configuration. It features a 64-bit eight core ARM solution in a big.LITTLE configuration which pairs together four little ARM Cortex A53 cores with four big Cortex A57 cores. This is in contrast to the current Tegra K1 which has a four core Cortex A15 configuration with a power saver and also a Project Denver dual core, which are both vastly different from a big.LITTLE configuration. I take this as message that while Nvidia pioneered the whole concept of a power saver core, ARM’s big.LITTLE is finally ready for prime time with proper operating system and firmware support.

All of this logic is combined into an SoC manufactured at a 20nm process. This would make the Tegra X1 Nvidia’s first 20nm product and mean that Nvidia is leading their products manufacturing-wise with Tegra. This may partially have to do with the complexity of the Tegra X1 versus a fully featured Maxwell discrete GPU, which will likely be close to 10 billion transistors.

Nvidia is featuring their new Tegra X1 in a way that they haven’t before, by showing it off first as part of automotive solutions. Nvidia’s automotive division has showed significant strength in their design wins and its ability to prop up the whole Tegra mobile business unit. They have been consistently pulling in more and more design wins which include Tesla, Honda, Fiat, BMW, Mini, Volkswagen, Audi, Rolls Royce, Bentley, Lamborghini, Porsche, Maserati and Aston Martin.

Nvidia announced two new products that utilize the new Tegra X1 SoC in their Nvidia Drive family of products. The Nvidia Drive CX is the company’s own solution which utilizes a single Tegra X1 to drive (no pun intended) the car’s infotainment and dash system. The Drive CX is responsible for powering the navigation and instrument cluster, both of which Nvidia has their own solutions to provide for auto manufacturers.

Nvidia also announced the Drive PX, which features two Tegra X1 mobile SoCs and is designed to enable auto pilot systems. The auto pilot system includes the ability to self park and is driven by an array of twelve cameras positioned around the vehicle to allow for a complete view of what is around the car. And because of the incredible compute capability of the dual Tegra X1 SoCs it has the ability to apply advanced computer vision to the auto piloted driving. This means thar cars fitted with Nvidia’s Drive PX system could potentially be among the smartest and safest on the road. The ability to see objects and people before the driver could also make cars fitted with Drive PX safer for pedestrians as well, an attractive feature for any automaker.

While Nvidia didn’t announce any tablet or smartphone design wins, I don’t take that as Nvidia’s not interested in mobility or that they don’t have any design wins. I see it as they are very serious and showing a high degree of success in automotive and we will hear about design wins at Mobile World Congress in March. As far as premiere mobile wins today, Nvidia is currently in the Nexus 9, Microsoft Surface tablets and Google’s Project Tango with their Tegra chips, and it will be interesting to see mobile products with Tegra X1 in the future as well. Last night was certainly a change of pace for Nvidia at CES and now it’s up to them to follow through with automotive and mobile customer commitments.