I’ve traveled around the world tracking the recent launches of NVIDIA’s Turing family of GPUs. At SIGGRAPH, in Vancouver, Canada , the company launched the RTX family of graphics cards based on the RTX series for professional users. At Gamescom, in Cologne, Germany, NVIDIA announced the consumer offerings, namely the RTX 2000 series, which includes the RTX 2080 Ti and RTX 2080. At that launch, NVIDIA talked about the new types of cores that are inside the Turing architecture, and how to use them for gaming. If you’re interested in learning more about Turing, the company created a detailed whitepaper that explains all the intricacies of the new architecture. The important thing to know is that NVIDIA added Ray Tracing (RT) cores and Tensor cores to accelerate AI computing workloads.

NVIDIA spent a lot of time talking Turing’s ray tracing and AI capabilities, and the RTX 2080 and RTX 2080 Ti that utilize them. However, the reality is that there are almost no games available today that can benchmark the performance of these new capabilities. Final Fantasy XV Windows Edition will harness the Tensor cores in the RTX 2080 and RTX 2080 Ti in order to run NVIDIA’s Deep Learning Super Sampling (DLSS), an alternative to Anti-Aliasing that NVIDIA offers for image post-processing. 20+ other titles are coming down the pipe that will utilize either NVIDIA’s Tensor cores or the RT cores. Until then, it is difficult to evaluate the actual performance of these new cores. As such, I believe reviewers are likely to be leaving some performance on the table in their analyses and should probably give these GPUs another look sometime next year.

I ran the new GPUs against NVIDIA’s GTX 1080 Ti and GTX 1080 for comparison. I did my testing on a system I recently built—an AMDThreadripper 1950X on an ASUS X399 Prime motherboard, with 32GB of Corsair Vengeance Pro RGB RAM, a 1TB Samsung 970 Evo SSD, and an Enermax full cover 360mm AIO liquid cooler. I used a 4K 60Hz Samsung monitor for testing. I ran each benchmark test a minimum of 3 times, and then averaged the scores.

3DMark is a very popular graphical benchmark suite made by UL Benchmarks, formerly Futuremark. It has a multitude of tests that run the gamut between DX11 and DX11, and 1440P and 4K. I ran three tests. The latest ones were TimeSpy and TimeSpy Extreme, a 4K version of the DX12 TimeSpy benchmark which natively runs at 1440P. I also ran DX11 FireStrike Ultra, which is an older benchmark that runs at 4K. I ran all four cards three times each, because there is always a bit of variance in test results. No surprise to anyone, the RTX 2080 Ti took the crown in all three tests by a noticeable margin—30% against the GTX 1080 Ti in TimeSpy, and a more sizeable 40% in TimeSpy Extreme. Since the FireStrike Ultra benchmark is a bit older, the results were a little less significant—they only showed about a 20% increase. The RTX 2080 did well, too, but in FireStrike Ultra it was essentially neck and neck with the 1080 Ti. This isn’t too much of a surprise considering that the 1080 Ti is better equipped for higher resolutions and graphical settings with 11GB of VRAM versus the RTX 2080’s 8GB. 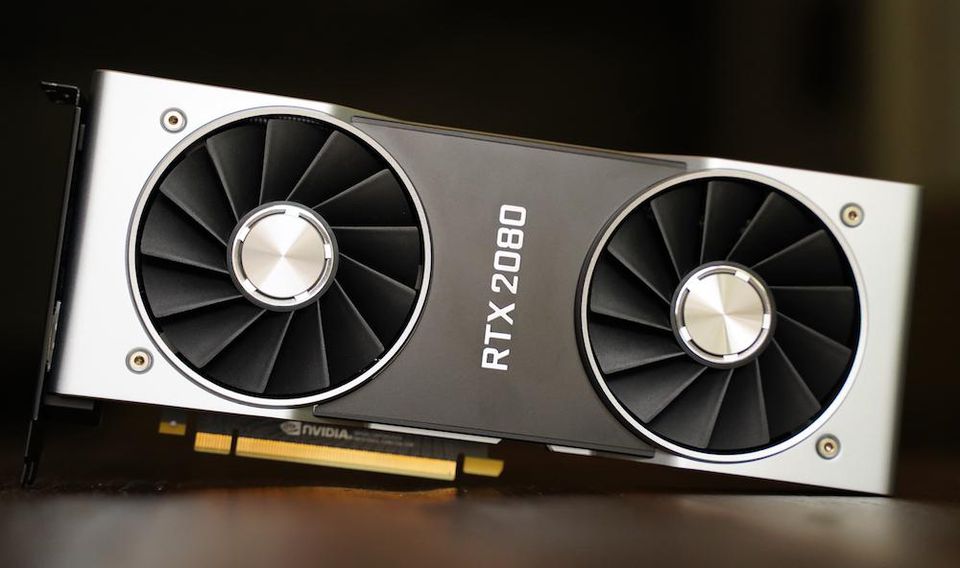 VRMark is another of UL Benchmark’s offerings. However, this benchmark suite is specifically geared towards evaluating a GPU’s capability to smoothly playback VR graphics. The suite has three different benchmarks that are designed to test the graphical worthiness of a GPU for three different levels of VR. Since we’re dealing with flagship graphics cards, I went for most intensive benchmark of the three—the ‘Blue Room’ test, which runs at 5K resolution in order to anticipate some of the upcoming 5K VR headsets. In this benchmark, the RTX 2080 Ti outshone the GTX 1080 Ti by over 50%. This illustrates how much more powerful the RTX 2080 can be at higher resolutions.

Another VR benchmark is the good old reliable SteamVR, which assigns a score of 1 to 11 for the worthiness of a GPU for VR. In addition to this, it reports how many dropped frames occurred and how much the application was GPU bound. Finally, the benchmark gives a full tally of how many rendered frames there were on screen, which is the number we used to differentiate the different GPUs’ performance. The graph for this benchmark almost looks like a perfect step graph—the RTX 2080 Ti was 20% faster than the RTX 2080, and the RTX 2080 was a little less than 20% faster than the GTX 1080 Ti. However, the RTX 2080 is about 60% faster than the GTX 1080—a major potential upgrade for those who currently use a GTX 1080 for their VR setups. 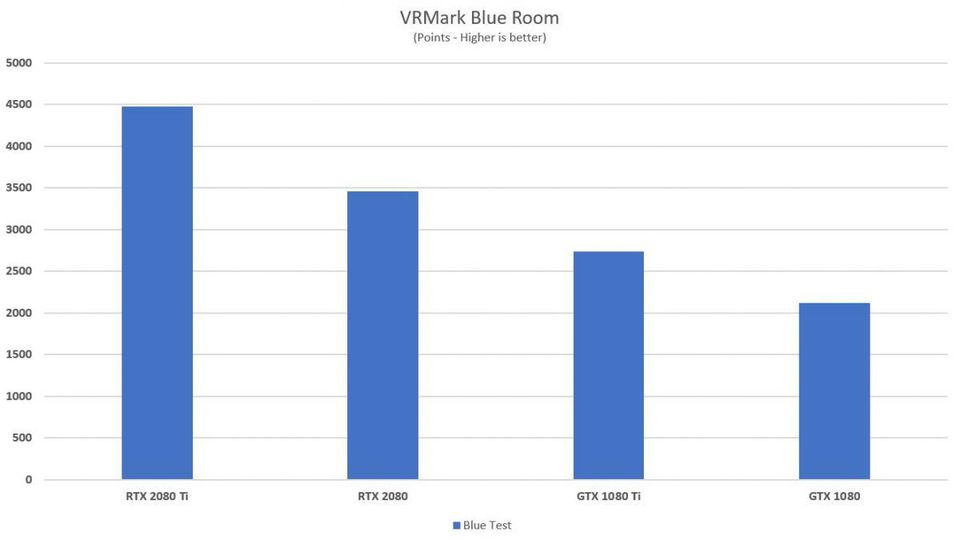 There unfortunately aren’t any games with ray tracing or DLSS currently available for testing. NVIDIA did provide an updated FFXV benchmark for testing DLSS, a very isolated use case. As I’ve said before, the success of the entire RTX series is dependent on whether developers target NVIDIA’s new RT and Tensor cores to utilize the new features like DLSS and ray tracing. While NVIDIA announced a lineup of titles that will use NVIDIA RTX technology, there is still doubt around whether it will take hold with developers. 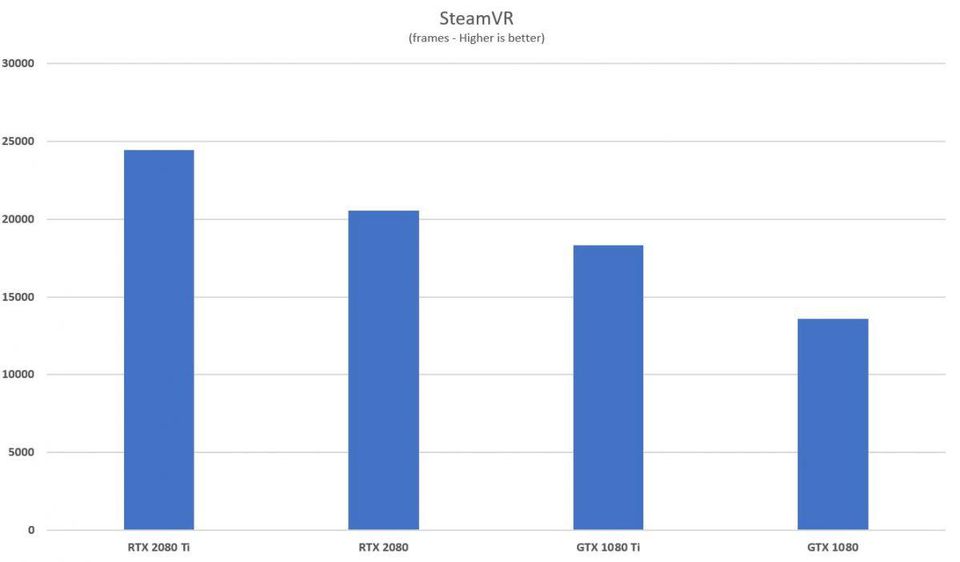 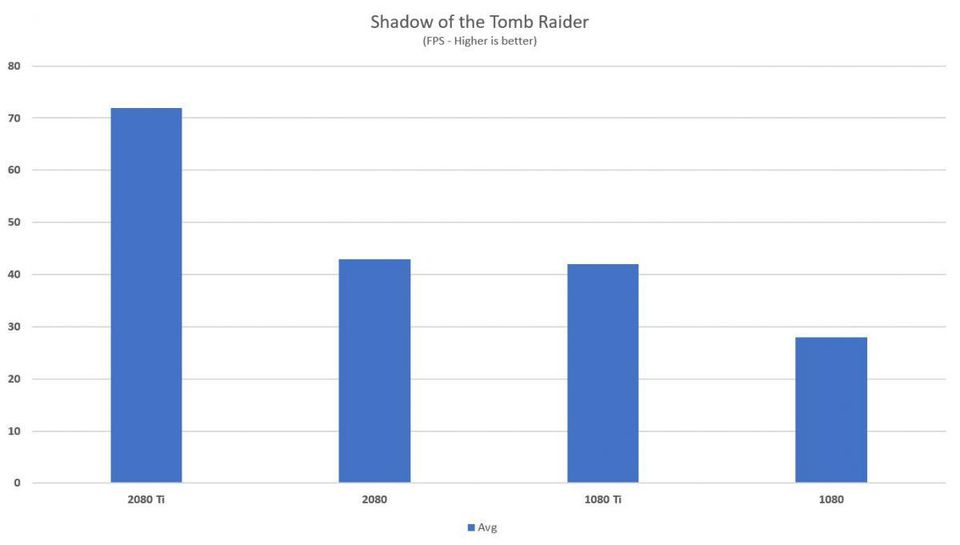 I acquired a particularly interesting benchmark from OTOY, which has a rendering engine called Octane. Octane plugs into many different applications and helps accelerate rendering and ray tracing through GPU compute. The newest version of Octane introduced ray tracing acceleration, using the RT cores in the new RTX GPUs. This at least gives us a rough idea of how much additional acceleration we can expect with RT cores. In our testing, the RTX 2080 Ti scored 360 in Octane bench, almost 80% faster than the GTX 1080 Ti. Without RT acceleration, the RTX 2080 Ti is about 40% faster than the GTX 1080 Ti on CUDA core performance alone. However, these are early days—I expect both OTOY and NVIDIA will improve the application and the drivers to squeeze even more performance out of the RTX series. 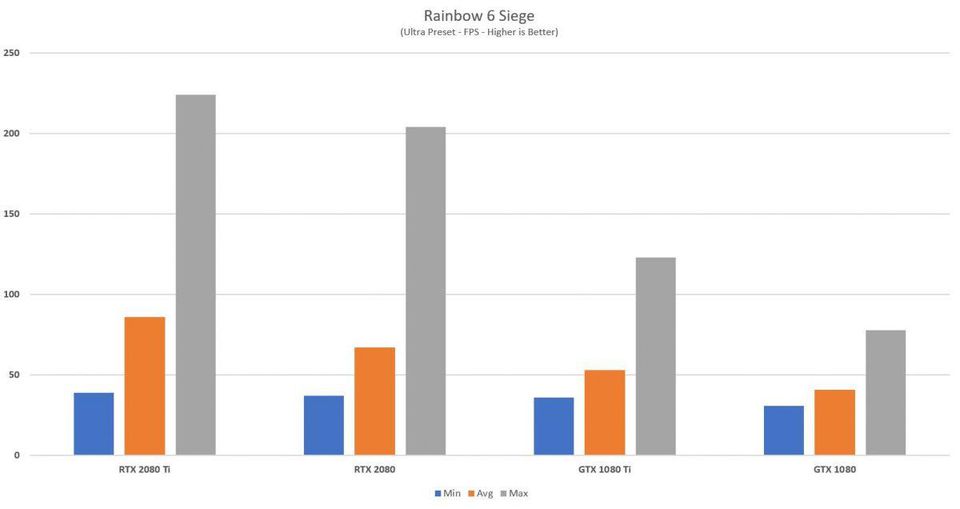 While NVIDIA says this GPU is highly overclockable, I was only able to do a very limited amount of overclocking in the time that I had. In the short time that I overclocked the GPU, I got a solid 10% increase on the GPU cores clockspeeds. I benchmarked that on 3DMark which resulted in a proportional 10% performance increase. I’m sure there will be more time spent on overclocking down the road, and with better results. I expect we’ll also see some AIBs with very highly overclocked cards, with better power and cooling designs than NVIDIA’s Founder’s Edition card. I wish I could do this GPU more justice regarding overclocking, but it’ll have to wait for another day.

The RTX series has more potential than any graphics cards I’ve tested in recent memory, but a lot of that potential is currently untapped.  I believe that these cards will continue to drive NVIDIA’s ASPs upward, but there’s still a lot of value and performance that is yet to be realized. Tensor cores and RT cores aside though, the RTX 2080 Ti is still the fastest GPU I’ve ever seen.

The RTX 2080 is a bit harder to justify today when you consider it is more expensive than a GTX 1080 Ti with seemingly only marginally better performance. I’m amazed that NVIDIA yet again released its non-Ti flagship card at the performance level of the previous generation’s Ti card. The RT and Tensor cores will eventually give the RTX 2080 performance boosts that will broaden the gap and help to further justify it over the 1080 Ti. As it stands today, though, if you’re looking at the RTX 2080 and 2080 Ti, I would say go the distance and get the RTX 2080 Ti.

The GTX 2080 and 2080 Ti set the new standard for NVIDIA and the entire gaming graphics industry, though it comes at a premium. The new Turing GPU architecture inside of the GeForce RTX 2080 and 2080 Ti has a lot of promise and is another giant leap for the industry leader. If NVIDIA’s gamble with Turing pays off, it will set a ridiculously high bar—it’s hard to imagine how the competition will respond if NVIDIA is successful with implementing RT and Tensor core features. If anything, NVIDIA’s competition should respond now before the RTX titles start to roll out and realize their full potential. For now, though, it’s safe to say the GeForce RTX 2080 Ti and RTX 2080 are the latest and greatest cards available to gamers.