Nvidia is just now finishing up its annual ecosystem show which I attended this week. It’s called the “GPU Technology Conference”, or “GTC” for short.  Held in San Jose, thousands of developers came to learn best practices and hear new information on all things Nvidia. This year, the big themes were accelerating big data analytics, machine language and computer vision. The company also made a series of major announcements. I want to discuss one, in particular, issued jointly with VMWare, which involves the remote desktop and “desktop as a service” (DaaS) for businesses. This potentially has big revenue potential for Nvidia, so let me provide some background.

What are Remote Desktop and DaaS?

First, let’s cover some basics. There are two ways that enterprises can deliver desktop virtualization. In one, their IT organizations buy their own servers and storage, and manage the virtual infrastructure in their own data centers; this is known as the private cloud. In the other, they can pay as they go and procure these services from a third-party provider, such as NaviSite or Amazon Web Services; this is known as the public cloud, or desktop-as-a-service (DaaS).

In both scenarios, think of the experience as a remotely delivered Windows desktop where all the processing occurs in the cloud (public or private) rather than on the PC or workstation.

Today, most remote desktop services offer virtual desktops to task workers who use straight-forward office-productivity applications, like Microsoft Office, or other simple tools that provide 2D imaging and text-based information. As I’ll get to shortly, this is beginning to change, with more sophisticated, graphics-applications, such as a Adobe Photoshop and Autodesk auto-CAD, becoming available through Nvidia GRID technology.

With all these benefits, the chief reason that more users aren’t on remote desktop is simply the often lousy experience they get today – driven both by a lack of pervasive connectivity and the fact graphics-rich apps just run at a snail’s pace.

Limitations of Desktop Virtualization without GPUs

Instead of having a desktop or notebook, users of desktop virtualization can use lower-power/lower-performance/lower-cost terminals, or even their preferred BYOD device like an iPad or Chromebook – since the apps are running on a virtualized server. 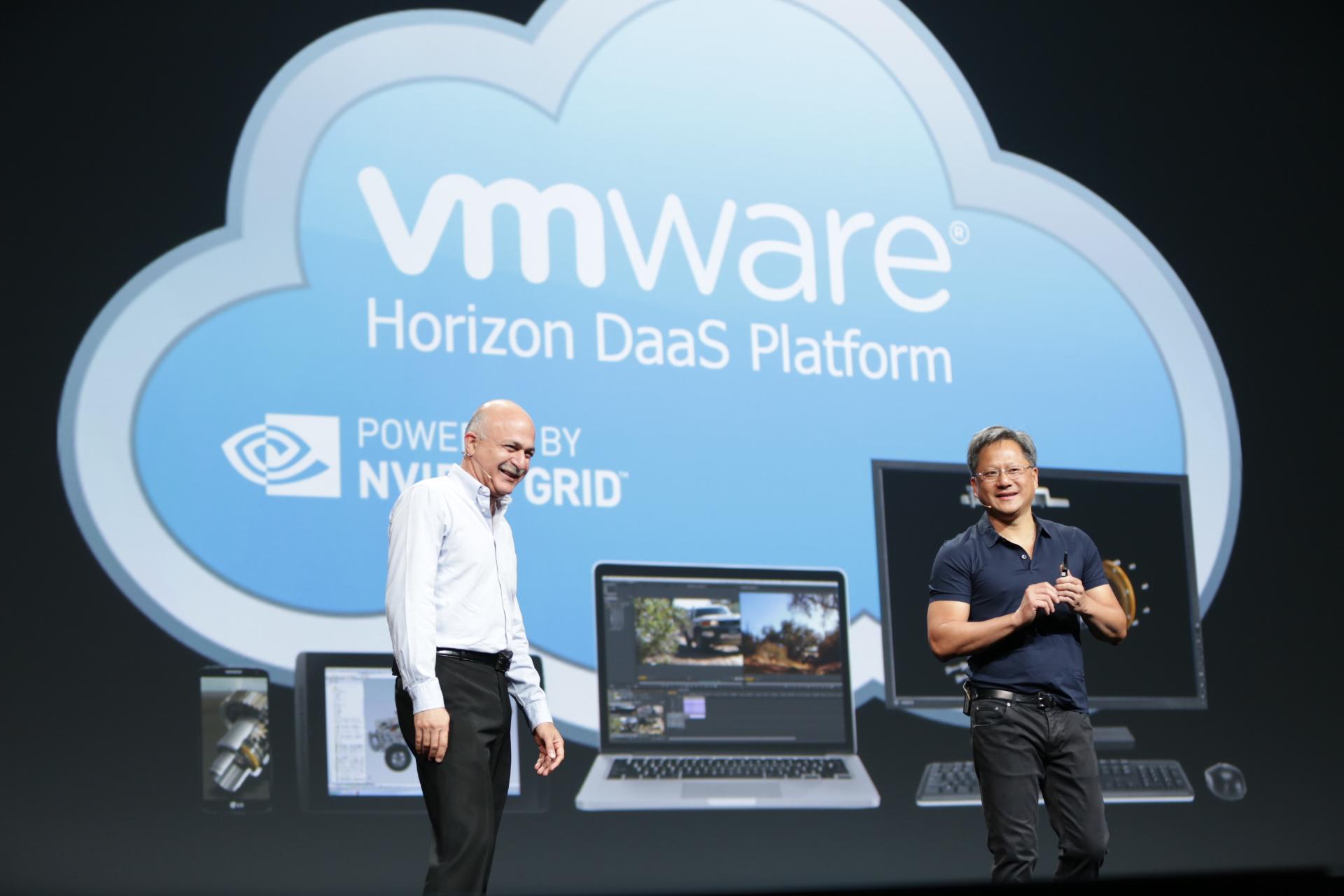 These benefits are obvious, but the limitations relate to the fact that traditional desktop virtualization simulates the functioning of the GPU on the CPU. As you would expect, any remote app that uses only the CPU will be very slow, particularly when it comes to watching videos and surfing an advanced web page is painfully slow.  So, what’s the solution for more advanced apps?

The big announcement at Nvidia’s GTC has to do with how users can use remote desktops (in public or private clouds) on graphics-rich applications.

The first thing I need to emphasize is that at to do remote desktop most efficiently and with a good experience, you need a hypervisor (the software that allows a processor to be shared among many users) that supports graphics virtualization. Given that VMware commands 70-80% of the hypervisor market with its ESXi hypervisor, it’s imperative that VMware support Nvidia GRID virtual GPU technology. That turned into reality this week.

VMware’s ESXi will now fully support Nvidia GRID, bringing graphics to any cloud. Technically, this means that multiple users can share one of the giant GRID cards. This means that enterprises can now support literally any app their user base wants, with the highest level of graphics performance, at the highest levels of efficiency. VMware announced that it will have a tech preview available to customers by the end of 2014, which implies — based on VMware’s historic schedule – that volume shipments should be available  by the end of the first half of 2015.

Nvidia also announced with VMWare that they will take this same technology into VMWare’s public cloud service, called VMWare Horizon DaaS Platform, so it can be used by service providers to offering their own DaaS based on VMWare technology.

So Why is this Important for Nvidia?

Remote desktop, DaaS, and graphics virtualization are difficult concepts to get your head around,  if you don’t do IT and technology for a living. Therefore, you may be wondering, why this is a big deal for Nvidia.

The reason is that it means service providers and enterprise IT will be buying more Nvidia Grid cards than they ever did before.

According to IDC, the “worldwide hosted workspace as a service market” has a 85% CAGR from 2008 to 2016. The way I interpret this, growth is driven by a few things. First, these new Nvidia GRID capabilities quite frankly pull hundreds of millions more workers into the potential fold of remote desktop.

Net-net, Nvidia helped create and now has access to an addressable market 6X the size of the current one.