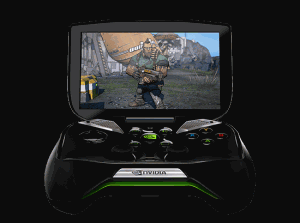 My first visual impression of SHIELD when I saw it was that it looked like a high end portable game controller used with an XBOX with a 5”, fold out display. The user holds it with both hands, pistol-grip style, with access to all the different kinds of buttons you would expect.  While the controller does look very cool, what is most interesting is the gaming flexibility it provides.

Gamers can display their games on two displays, the integrated display and to an HDTV.  The integrated display is 5”, 1,280×720 resolution, and is adjustable for optimal viewing angle.  When not gaming, it folds down to protect itself.  Gamers can also display on the big screen, too, up to a 4K display.  This can be done wirelessly or via an HDMI cable.  Wireless display is accomplished via a dongle that connects into the HDMI port of the HDTV.  Essentially, the gameplay is encoded into a an H.264 video stream and sent to the TV in a similar fashion as Apple  AirPlay.

One of the biggest differentiators in gaming is that players can play Android and Windows PC games.  Android gaming is very straight-forward.  Just download a game from Google Play and you play it.  If you ever had an Android device like a Nexus 7 or HTC One X+ Android phone and purchased a game there, you can also play that same game on SHIELD.

SHIELD also plays Windows PC games, too, which is very distinct, something no other portable game device can do.  NVIDIA’s desired PC experience is straight-forward, while the technology behind the scenes is complex. In SHIELD-mode, the gamer slides the carousel to “PC” games where they are presented with a list of PC games.  They click the game and they play it, it’s that simple. The user never sees Windows Metro or the start screen or anything that resembles a PC.

Behind the scenes, the game is actually being played on a remote PC in the house and images are being transmitted to SHIELD or the HDTV.  It uses technology similar to that used on remote desktop applications, where the image is encoded into an H.264 video. The games are screened by Nvidia to make sure that they work well on the HDTV so the quality of service is better.  Small text could be a bit of a challenge in some games, but as devs realize they can expand their gameplay to SHIELD, they will accomodate by scaling the text to be used on the 5″ display.

I very much hope that the experience is as smoothe as NVIDIA desires, because if there are a few hiccups, gamers will stop using the Windows PC gaming function, one of SHIELD’s biggest differentiators.

Finally, when you add up the fact that SHIELD can operate on the small screen, big screen, can be used as comfortably in the living room as it is in the car, it really is as, as NVIDIA’s Jen-Hsung says, a “portable console.”  While first designed as a portable gaming device, it really does beg the question on why you would need a gaming console as long as SHIELD works as planned and has access to the best titles.  Many hard core gamers will have both SHIELD and a gaming console, but where money is tight or consumers want just one device, they may choose SHIELD.

SHIELD is undoubtedly a major disruptor, but there are many things we don’t know yet, like price and distribution, to yield a market verdict.  What I can say is that if the experience is as good as presented, there will be very high levels of interest across “gamers” and consumers who really like to play games.  Nvidia plans to ship SHIELD in Q2 of this year and as soon as I get my hands on one, I will let you know about the quality of the experience.