Last month, I wrote an overview of the Lenovo Group server business outlining their opportunities, strengths, weakness, and threats. I offered recommendations for 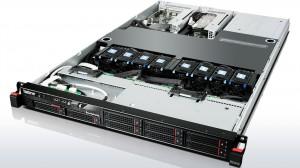 Lenovo Group to break out of their current market share position in the “other” category and make a serious play in the server market. At last week’s Lenovo’s server announcement, I was hoping to see something very different, but we’re still seeing more of the same. The ThinkServer RD540 and RD560 provide little to cause enterprise or SMB customers to move away from their current Dell, Hewlett-Packard and IBM platforms and consider Lenovo servers. I did want to share three key observations, but it’s important to keep in mind that I don’t think these will result in market share gain. If you want a deeper dive, we have published a position paper you can download here.

Much of the excitement in the RD540 and RD640 announcement is tied to the CPU and Intel. Server system performance gains were quoted as “up to 27% over the previous generation”. This is an impressive number until you realize that other Intel OEMs and Intel are saying nearly the same thing.  This is because they are using the same CPUs.

Lenovo also include their new Smart Grid power management software in the new servers. Lenovo Smart Grid is a rebranding of Intel Node Manager, Intel’s attempt to provide a rack-level power management scheme for its platforms. It is not apparent if there is any additional Lenovo IP added on top of the Node Manager code other than the instrumentation that would be necessary to identify and manage the servers.

Lenovo is already providing ThinkServer EasyManage (based on LANdesk), so there are now two disparate tools for managing servers instead of a single tool. Feature gaps exist versus what Dell, Hewlett-Packard, and IBM offer, some functionality could be duplicated, and using the two products together could be awkward.

Catching Up In Areas

Along with the news about the Intel CPUs, Lenovo also launched new I/O options providing greater bandwidth. The new I/O is cited, but there is little easily-available detail. According to the technical specifications, the base model comes with 2x1GbE for networking and another 1GbE shared with the management controller, which most customers would dedicate to the management function and not share. With a target of virtualization, having higher throughput networking is really a critical feature for a server in this application class.

Lenovo is also catching up with its competitors on storage capacity, which is a good thing, especially in platforms that are focused at the SMB market where there is lower probability of centralized network-based storage.

Lenovo continues its path of meeting the market without adding a lot of differentiation.

For example, Lenovo released the ThinkServer RAID 710 controller for these new servers. It is based on the LSI MegaRAID card and carries all of the same features and functionality of LSI’s commercial card. LSI products are not exclusive to Lenovo and other OEMs like Dell, Fujitsu, Hewlett-Packard and IBM have all private labeled LSI solutions for their branded RAID over the years.

Lenovo also announced support for Oracle VM and Oracle Linux at Oracle Open World this year. I applaud this as a step in the right direction as broader OS, hypervisor and application support is always preferred, but it’s important to note that if one was to draw the Venn Diagram for Oracle VM/Oracle Linux customers and Lenovo customers, there would be little, if any crossover. Oracle is selling into larger accounts and Lenovo’s customers (outside of PRC) are generally in the SMB space.

Additionally, on the Oracle certification page there are 1,170 supported systems, of which 4 are Lenovo. Over time, as Lenovo support continues/expands and they may begin to make inroads into larger accounts there could be an opportunity to leverage this certification.

No Reason Yet to Move Off Dell, Hewlett-Packard or IBM to Lenovo

Enterprise, education and SMB would love to see Lenovo take some bold, new action in the server market and potentially shake things up with more competitive pressure on the big three. But this Lenovo ThinkServer RD540 and RD640 announcement doesn’t come close to changing the market dynamics between them and Dell, Hewlett-Packard, or IBM.

For some SMB customers, these products might be able to meet their server needs, and the pricing may present an interesting option to consider. But for the bulk of the market, there isn’t a compelling reason to stray from existing, standardized vendors, because at this point we still fail to see any additional competitive differentiation that could be translated into a business advantage for customers.

We are still hopeful that like Lenovo did in personal computers and smartphones in China, they will continue to innovate.

If you want a deeper dive, we have published a position paper you can download here.