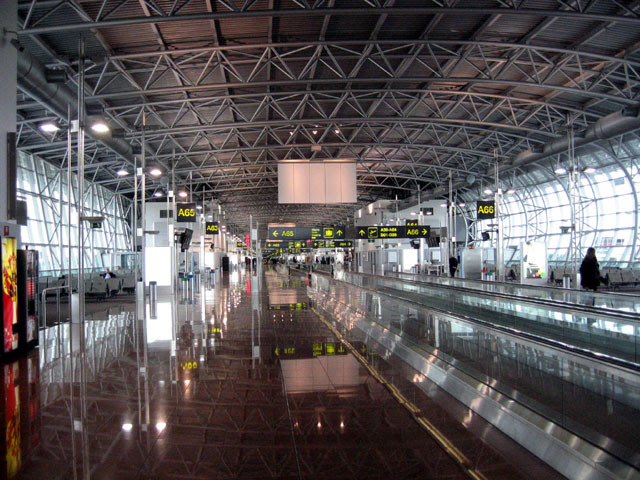 As I write this I am sitting on a flight to Hong Kong. It is a long haul, and I feel like data being shuttled through a network. I often have conversations with business people who hear the marketing buzz of SDN, NFV, network virtualization and how these technologies are going to solve all of their problems. But all of the jargon goes over the typical business person’s head, and they just want to know, in English, what are these things and what do they do. The short answer is: they make your business be nimbler so it can react to market changes more efficiently. We’ve written about this extensively. But let me explain how all of these relate to international travel.

Moving data back and forth is like an airline moving passengers (I am data right now).

In traditional networks from people like Cisco Systems, Juniper Networks or Alcatel-Lucent Enterprise, a core router centrally decides where data can go (control plane) and helps transport the data (data plane). Software-Defined Networking (SDN) breaks the link between control and routing and distributes it, allowing those functions to happen in a distributed manner out in the network. Gate agents have to go through HQ to get anything done; we’ve all seen how many keystrokes it takes to just look up a ticket. SDN is like giving gate agents the autonomy to optimize the seat assignment without having each decision managed centrally. This distributed control is faster and more efficient, but it is limited to smaller domains; they can move you from 18D to 23A, but they typically can’t change your destination to Paris (unless it is “on the way” to the final destination). This is why customers want SDN: distributed functions happen faster and they take the load off the central HQ, reducing traffic to the core.

Some functions like firewall, gateway, load balancing or management exist to explicitly support moving data. These are usually dedicated hardware appliances; tricky to install and hard to manage. Network Function Virtualization (NFV) virtualizes these functions. Some people think SDN and NFV are either/or; but because they serve different functions, it is really “and”. Often, these functions are driven by carriers, and they sit at the edge of the network. NFV is the TSA/airport security, working independently of the airlines and providing important services that support the movement of passengers, but they let the airlines do the actual moving. NFV accelerates business, because virtualized functions can be deployed quickly, or even automatically, responding to needs. A virtualized TSA would be able to send more agents to any checkpoint when traffic gets too high, or convert a gate checker into a baggage screener in a heartbeat. Deploying and changing quickly can reduce costs and react faster to market conditions.

Finally, there is open networking. This is the idea that network switches can run any software/application instead of having to be tied to the proprietary vertical offering of the hardware vendor. This brings a lot of flexibility, and it’s like Southwest Airlines: choose any seat you want, the plane loads faster and is more optimized (except for the last guy on, but he should have checked in online).

What about OpenFlow? OpenFlow is a protocol that is used by both SDN and NFV for communicating and routing information. OpenFlow is your airline ticket. It identifies you (the data) and moves you through security and check in, gets you on the plane and lets you know where to sit. Both SDN and NFV can deal with OpenFlow and the protocol allows these to work together (not against each other as some think).

Software-Defined Wide Area Network (SD-WAN) is an overlay of the WAN connection that gives more flexibility between 2 points. This is the connecting flight that I am forced into as a resident of tier 2 city; every time I need to go anywhere, I have to fly AUS>DFW first. It’s a simple route between 2 places, and if I get to the airport early they will often put me on an earlier flight; they are trying to optimize traffic between the hub and spoke. The more efficiently the airline can route traffic between the branch and HQ, the happier the users will be.

The beauty of network virtualization is that it can do a better job of routing your data around the network. Traditional networks will have more fixed paths for data. Can’t get from Austin to Chicago today? Come back to the airport tomorrow and try those same flights again. With virtualization the network is more flexible, like our flight to France had the plane taken out of service. One couple caught a different connection and one couple was put on a completely different airline (because we had status). Many on the flight (like a traditional network) were simply told to return tomorrow. Those of us on the “virtualized network” were still able to travel, literally meeting each other in the customs line at Heathrow and then taking the final leg together. That is the type of flexibility that businesses need when things go south; the ability to better manage the situation. All of these network virtualization tools help businesses achieve this.

The rigid, staid processes of traditional networking simply create too many barriers. In changing environments like we face today and in the future, network virtualization is the best way to get there, but it is not just one technology it is many. Just like the international transport system.