I spent this week in Barcelona attending Mobile World Congress. Vendors from across the globe came to MWC to market their mobile ideas, opinions, hardware, software and services. I paid particular attention to handset makers and mobile SoC developers. I saw some very positive things from both these groups, but I saw one very disappointing thing that is on the brink of being disingenuous, and that relates to marketing of 8 CPU-core SoCs and handsets. I want to be crystal clear: there’s nothing wrong with having an 8-CPU core SoC versus one with 5, 4, or even 3 CPU cores. What is wrong is marketing 8 mobile CPU cores aggressively as a major differentiator or something that makes an experiential difference.

I have spent 25 years in the middle of the chip wars and I know well how the game is played on the chip, device OEM, benchmark, and device channel level. In fact, I directly participated in it as an OEM and chipmaker for 20 years. I know something odd when I see it, and in my opinion, a few players in the ecosystem are stretching the bounds of reality, and I’d like to shine a light on it.  Why? I think consumers deserve more from companies, and I’d like to see industry practices change. I want to repeat: there’s nothing wrong with an 8-CPU core SoC, just the way some people are marketing it. 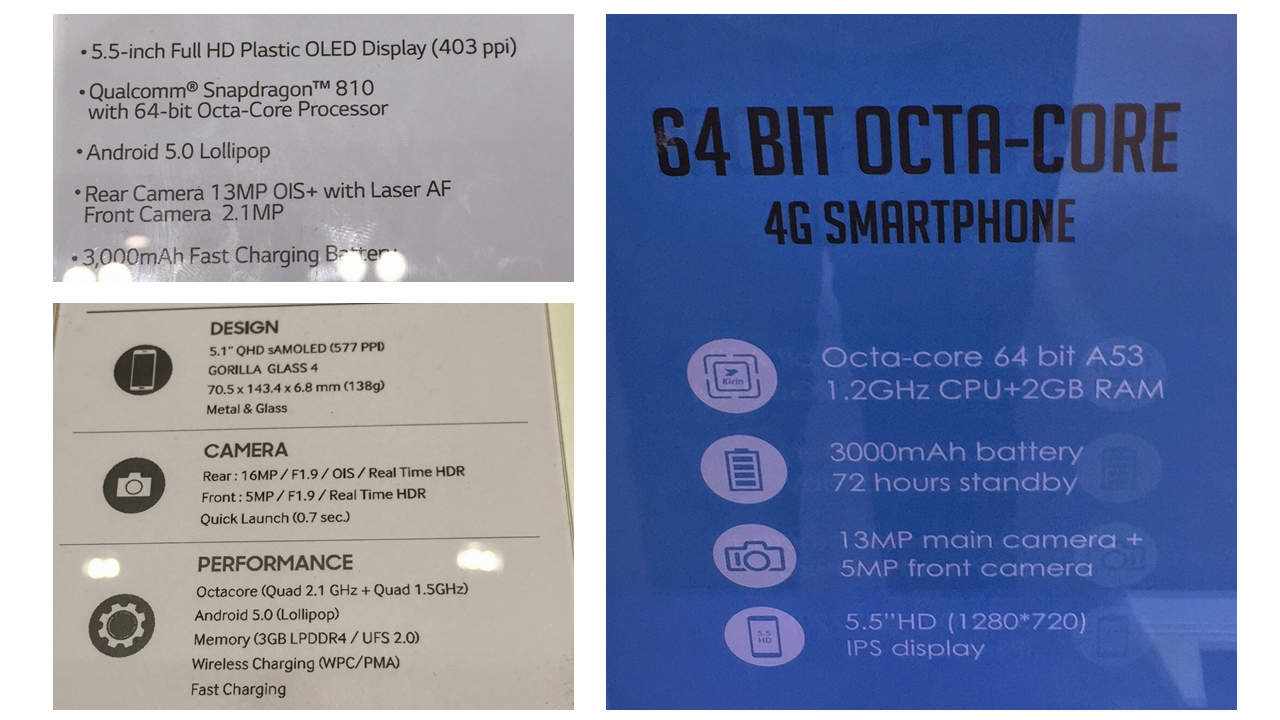 Let’s start with what is being exposed to the consumer. As I wandered the halls of MWC, I went to each major handset maker, SoC developer, and IP provider. I wanted to see how they were communicating the fact that their phone or chip had 8 CPU cores.

On the handset side, there were different implementations of communications. Some didn’t list any tech specs of their smartphones. They presented phones in classy, visual arrangements, not even listing any of the phone’s specifications. A bit odd at a tech trade show I know, but the vendor wanted focus on the look of the phone and were also trying to downplay the relatively weaker specs compared to others. Others did list that they had an 8 core phone:

Method one deprioritizes that the phone has 8 CPU cores and puts it in the context of all the phone features. Method two prioritizes 8 CPU cores over all other performance features. Method three indicates that the most important feature in the entire phone is a 64-bit, 8-CPU core processor. So why would phone makers want to stress 8 CPU cores so much? There are a few reasons. Like any product, marketers are trying to differentiate their wares. If other phones have 4, 3 or even 2 cores, then 8 cores must be better, right?

Certain SoC makers are complicit to the problem, too. Some SoC makers name their product with 8 cores as the first word in their descriptor. Others have tag lines that list 8 cores as the second word in the string. Others even create special feature brands with “8” in the name. 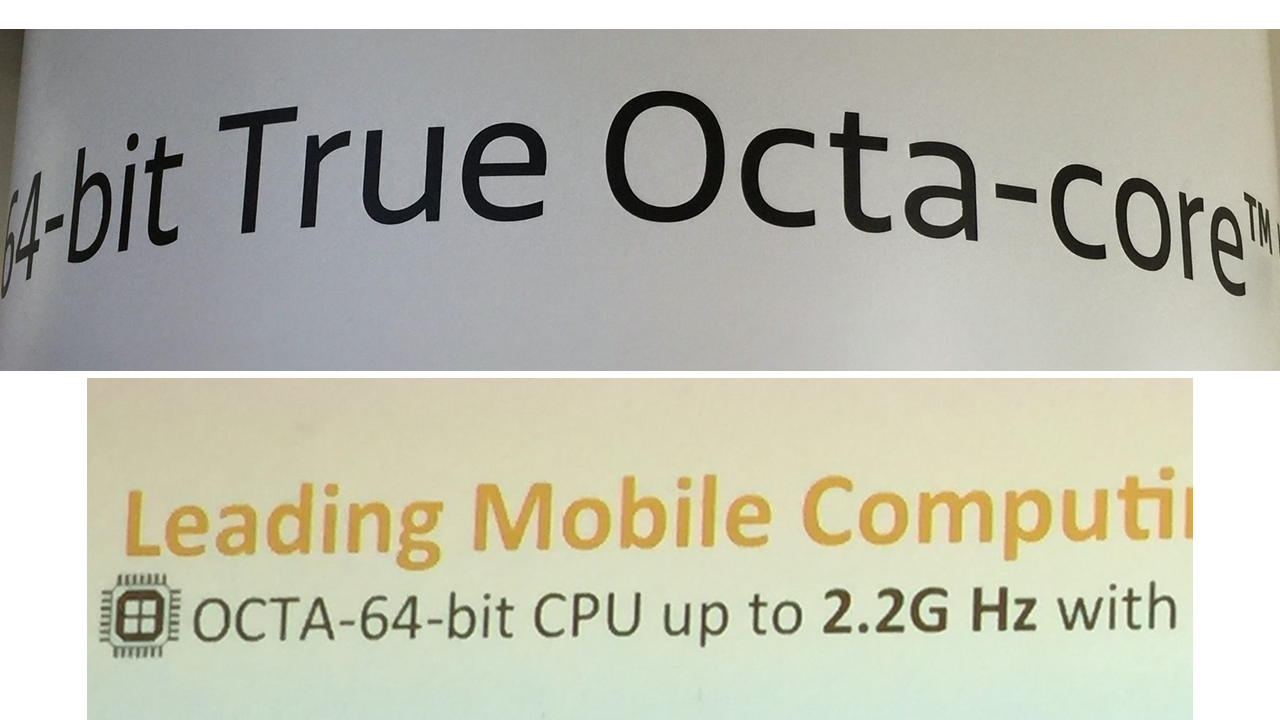 So what’s wrong with heavily emphasizing that your phone or mobile SoC has 8 cores? Having 8 CPU cores doesn’t mean that it outperforms or provides a better user experience than a phone with 5, 4, or even 3 cores. Why? The smartphone phenomenon is relatively new and therefore the clear majority of mobile software is lucky to take advantage of 2 large cores, not the remaining 6 cores. Many of the workloads that could have been done on all the CPU cores are being performed on GPUs, DSPs and fixed function silicon like video transcoders. Additionally, heavily multitasking isn’t performed a lot because of screen size is small compared to let’s say and large PC notebook. In fact, mobile operating systems frown on multitasking as it drains the battery.

Notebook PC makers realized all this a long time ago, which is why most notebooks are 2 or 4 cores. So why do phones have 8 CPU-cores even though the software can’t really take advantage of all 8 cores?

The 8 CPU-core product concept (not the marketing) comes from ARM Holdings, who developed what is called “big.LITTLE Architecture”. This is an 2-8 CPU-core architecture that uses 4 “big” A57 cores and 4 “little” A53 cores. The small cores don’t do a whole lot as they are small and intended to do tiny tasks in the background. They are really intended to save power when the phone is idling or not doing a lot, only the small cores are active. The alternative method versus the big.LITTLE 4×4 configuration is to have 4 large processors that ramp voltage and frequency up and down depending on the workload. This is the method that the SoC makers use who develop custom CPU cores.

To ARM Holdings’ credit, in their MWC booth, they weren’t over-emphasizing 8 CPU-core capability at all. In fact, they used the following processor string: “ARM” / Sub-brand / Model # / (MP8)”, where the “8” means 8 cores. Ironically, ARM Holdings placed less emphasis on 8 cores than any of the phone makers or SoC makers that used their 8-core designs used.

So where do we go from here? There are a few paths.

Advertising and promotion regulations vary country by country, and based on my experience, anyone who markets anything has a greater chance of getting sued for deceptive or misleading claims in North America and Western Europe than in China and South Asia. Americans are very fond of class-action suits that make very little money for the plaintiffs, big headaches for the defendants, but a whole lot of money for lawyers. That’s one way it could go.

I really hate letting lawyers and courts settle anything, so I would like to see certain manufacturers do the right thing and tone down their over-emphasis on 8 CPU cores versus the reality of what it delivers. In addition to moving the “8” to the back of the brand string, it seems there could be a way of communicating the “4×4” makeup. Marketers could also just drop one of the small “4”s to emphasize the 4 large cores. It’s not like the industry exposes every core to the public. There are GPU cores, DSP cores and even fixed function processing cores whose cores don’t get exposed.

An alternative is to get the mobile software ecosystem to take full advantage of those 8 cores, like the workstation and server markets have done, so the hype more equals reality. The challenge is that the mobile software ecosystem has bigger issues and opportunities at hand, like taking advantage of 64-bit memory addressability and simplifying the programming model of mobile GPUs, DSPs and fixed function controllers.

While you may have expected me to recommend using mobile benchmarks to help fix this issue, but unfortunately, there are more bad and gamed benchmarks in mobile than there are good ones.

It’s time to do the right thing.